What You Should Know Before Going to See Pete’s Dragon

I feel like I need to shamefully preface this review by saying I had never seen Disney’s original Pete’s Dragon movie. Not until after we screened this new version hitting theaters this Friday that is.

I bought the DVD to add to our Disney movie collection but didn’t watch it until last week. I meant to watch it before seeing this new version but since it wouldn’t have the same nostalgic feel for me either way I didn’t push it.

If you’re going into this new film expecting to see a remake of the original you’ll be setting yourself up for disappointment. Aside from their names this remake is quite different. No singing, and the storyline is new. But that was what Texas-based screenwriter and director had in mind the whole time. David Lowery and Toby Halbrooks said they decided not to go back and re-watch the original Disney movie when they were working on this one. Instead they said they wanted to remember the feelings they had when they watched the movie (over and over and over) as children, and make sure to give us all that timeless magical feeling in this new film. And let me tell you, they succeeded.

Lowery said he knew he wanted to be a director since he was 7 years old. Know for his success with Indie films, this is his biggest movie to date. He’s also contracted to work with Disney on a Peter Pan remake, but no word on when that one will fly into theaters just yet. 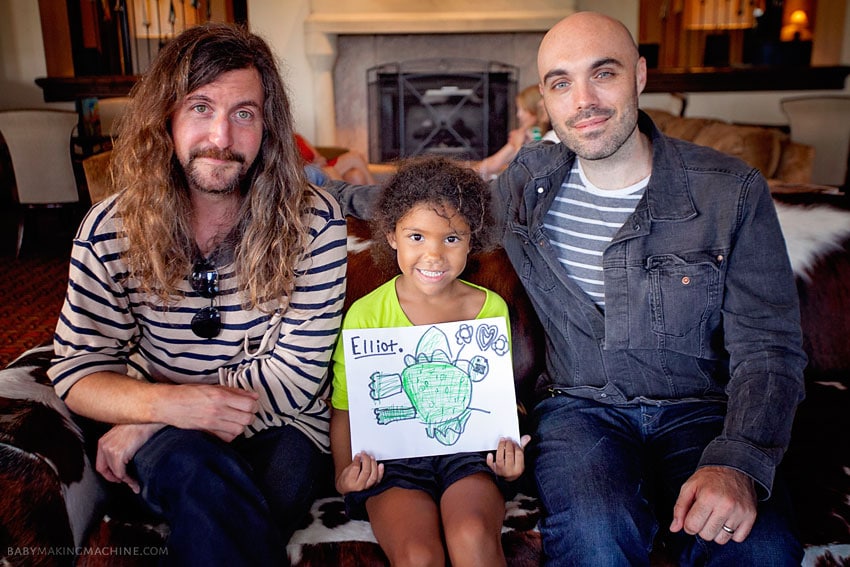 Lil’ J loved the movie and was so impressed while listening to the director and screenwriter at the Paramount Theater, she drew a picture of Elliot to share with them.

We were lucky enough to meet one-on-one (or two-on-two) with Lowery and Halbrooks to talk with them more about this movie and what they hope families get out of the film.

To think, I interviewed my first movie director (ok Steven Spielberg isn’t too shabby) about a month ago and here she is 6, already crossing this off her list. Check it out!

At first we agreed she could wait and ask her questions at the end of our interview but as you can tell, she couldn’t hold them in. Luckily they seemed to find her endearing. Next time we may have to rehearse being patient while the interviewee finishes their answer.

The awesome thing is they inspired her in more ways than one. She’s now added “director” to her long list of things she wants to be when she grows up thanks to David Lowery and his new film Pete’s Dragon.

Now on to our review!

Just don’t. It’s completely different movie with the same name. My kids and I watched Disney’s original last week and I didn’t tell them the name of the movie. They were captivated by the singing, the charismatic Pete and the cartoon dragon, but my daughter never saw it as the same movie. 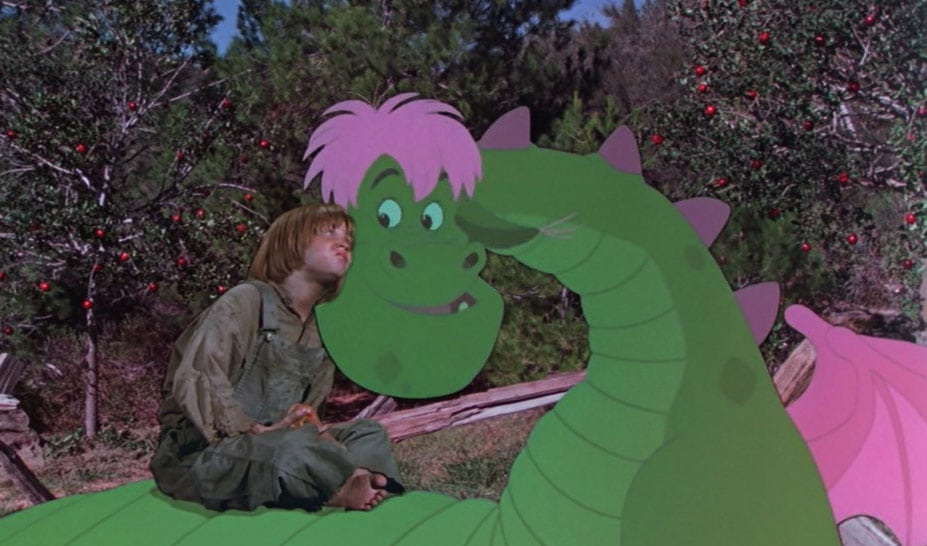 “Mom! I’ve made a connection! His name is Pete like the movie we saw, and he has a dragon named Elliot like in Pete’s Dragon!”

Fans of the original forgive us.

I think if I saw and watched that ‘77 version as a kid I would have absolutely adored it. I love musicals and know I would have memorized and belted every catchy song. There is a lot of drinking and some off-color humor I found surprising but funny. I’m late to the game so it’ll never have those emotional ties that years and generations of watching it can bring. But I’m happy to say this new movie will definitely do the same. I didn’t know what to expect with either but I love them both in different ways.

This 2016 version is about a boy who is orphaned after a car accident and moves to the woods and finds a friend who happens to be a dragon. There they live together for years. When Pete is discovered he and Elliot go on an adventurous journey to find and protect each other.

If you see the previews and the furry yet realistic-looking dragon you may be wondering if it’s too intense for little ones. My kids found it exciting and adventurous but not scary. There are a couple scenes: One with a tranquilizer gun that the director said ultimately moved the movie from a G rating to a PG rating that could be a little startling for kids, and may lead them to think he died. It could be sad for extra sensitive children so use your discretion.

About two thirds of the way through the movie I wondered if Elliot had fire-breathing power and I got that answer real quick. And it was awesome. But a little intense. Lil’ J wasn’t scared but did cover her eyes the first time we saw it because she was worried what would happen to the characters. I’ve never seen her do that during a movie before but she insists she wasn’t afraid. My son thought it was cool and kept waiting for him to eat someone (he doesn’t).

While this movie didn’t have an overt message like Zootopia’s “don’t judge a book by it’s cover” or Finding Dory’s “never give up on your family and friends” Pete’s Dragon was a simple yet wonderful movie made for kids to enjoy. Less violent and intense than The Jungle Book, this is a movie you can take the whole family to see and leave feeling uplifted and inspired by the beauty and hidden magic in the world.

Like director David Lowery told us in our interview with him, he hopes kids leave wanting to go out outside or into the woods and explore, and draw enchanted pictures as Lil’ J did.

This was the second live-action Disney movie that I’ve seen in theaters and left knowing I’d for sure be buying it for our timeless collection. I laughed with my daughter, sat in awe with my son, and got chills at the beauty of it all. It was truly a majestic movie that will leave you wanting to explore the mountains and discover magical dragons on your own (I’m not kidding, my daughter is already plotting a trip to Utah to look for some in the mountains). 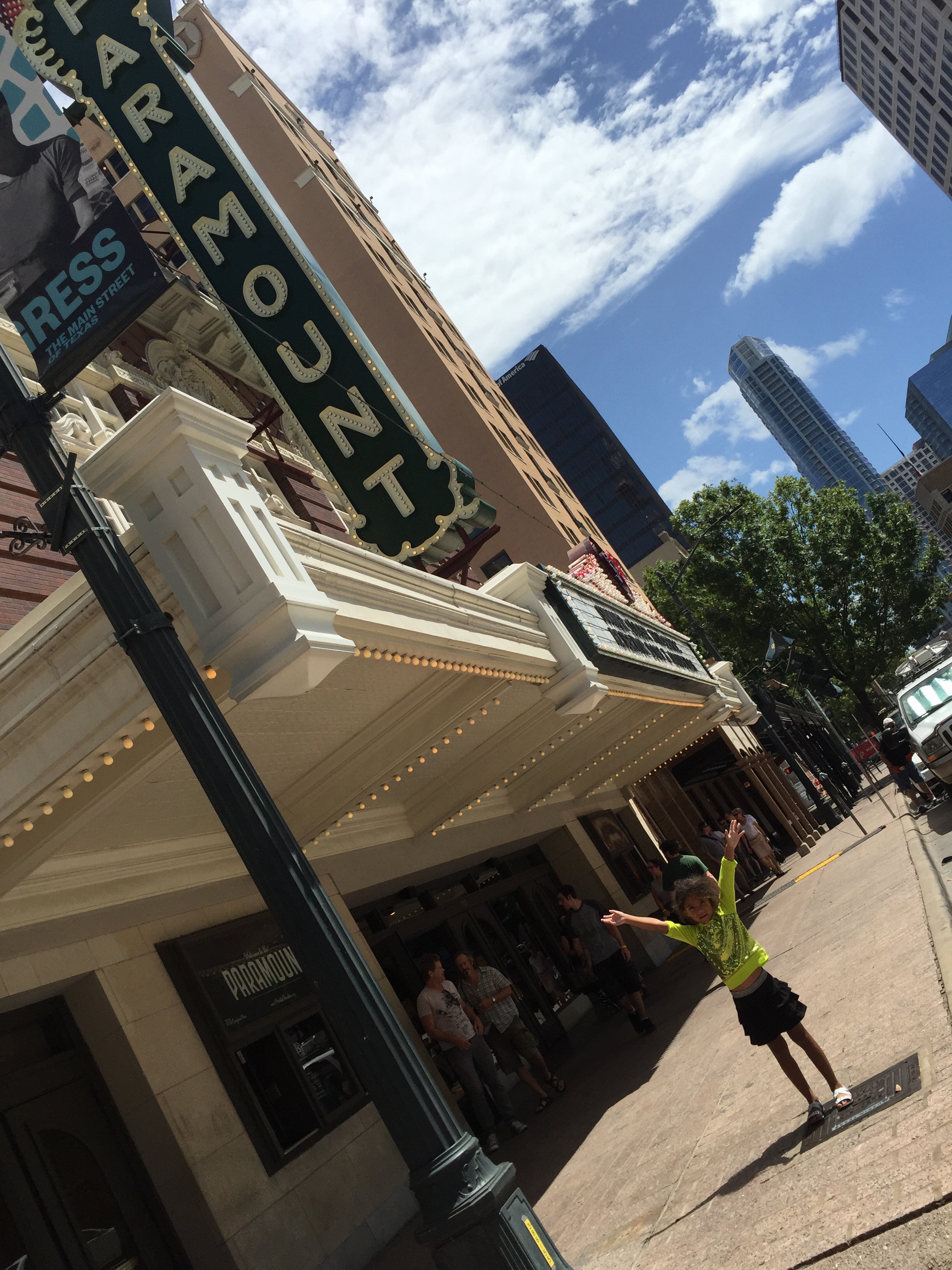 Q: What did you think of Pete’s Dragon?
A: It was really great. It’s my favorite movie.

Q: What was your favorite part?
A: When the people riding in the police car said “you can’t say dragon over the radio!”

Q: Were there lots of funny parts?
A: Yea, I laughed when the guy fell out of the stroller thing [stretcher] because he saw a dragon.

Q: Do you think other little kids would like it? Why or why not?
A: Yea, but only between 5 and 6 and 7 and stuff. Ok and 4 too. Not 3 because they’re too little and they’re probably gonna be scared. But now that I think about it I think that they’d actually like it too.

Q: Did you think it was scary?
A: No. Because the dragon isn’t really scary it’s like a friendly dragon.

Q: Were there some scary parts?
A: Yea, like when he breathed fire.

Q: What’s something you learned from this movie?
A: Even though you

Q: What does this movie make you want to do?
A: It makes me want to go outside and play and stuff. Have fun and do nature stuff because the movie is about dragons and dragons are outside and they’re fun.

Q: Do you want to buy it when it’s on video?
A: Yes, cause I really liked it and I’d like to watch it sometimes.

Q: Did you like the Dragon movie?
Yes.
Why?
Because I liked it.

Q: Was the movie sad?
A: Yea. No! It’s not. Dragon flied and jumped. He jumped and he cried cause he fell.

Q: What part did you like?
A: I liked the cars chasing the dragon.

Obviously he didn’t understand the entire movie but he loved the action and adventure, and luckily for him, Elliot was seen in most of the film.

Pete’s Dragon flies into theaters everywhere this Friday August 12th. Let us know what you think of it!

Here’s a fun educational adventure packet and coloring sheets to get your kids excited! 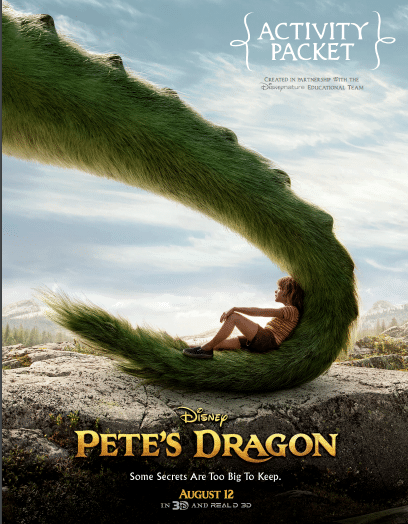 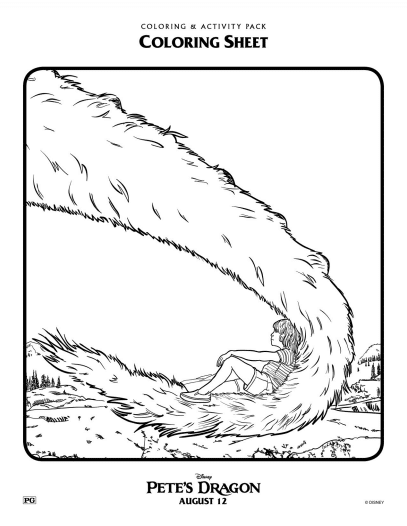 I have been dying to read a review of this movie. My son is 11 and I was trying to decide if he would enjoy it or not. Pete’s Dragon really looks like a great film based on the previews and glad to hear your 3 year old enjoyed it!

Lol ! You asked Big T “why did you like the movie?” and he said “because I liked it”. That was funny.

Yea, he’s definitely “a man” hahaha. So much for his first interview.

I have been wondering about this one. Mainly because I loved the first movie as kid. I’m glad to know a head of time about the story being different. Also that I can take our granddaughter to see it without worry of her being scared.
Tell Lil’ J thank you for her review, it realy help make up my mind on this movie.

My kids have been talking about this movie a lot recently. I was worried it would be too scary for them, but I’m glad to hear your kids enjoyed the movie. I can’t wait to schedule a trip to the movie theater with the family.

I have also never seen it. Because I have a bearded dragon and a frilled dragon I think I’ll like it LOL. It’s cool to see that the movie inspires kids getting outside and into nature.

What a great experience for your daughter! I’ve never really put much thought into how movies are made and where the inspiration comes from you.

I have heard some great things about this movie but nothing compares to the 6 year old review. That is fantastic, I love seeing things through the eyes of the kids. I now feel like we have to watch this movie, thanks for sharing!

Girl you’re not the only one guilty of not seeing the original movie. I had never heard of Pete’s Dragon until I started seeing the ads a few weeks back. How lovely that you were able to interview the directors so cool.

I really need to go back and rematch the original Pete’s Dragon. I don’t remember a whole lot about it, which is typical with me and movies. We are excited to watch the new version. I’m glad you dig deep into your review and spelled it all out. Other reviews I’ve seen have just said it was scary. I was a bit hesitant, but after reading your take, I think they’ll be okay.

Thanks so much! I wondered about this movie for my 4 year old grandsons visit. You answered the question I had….is it too intense and scary? I think he and I will chat before the movie so he’ll know it’s tranquilizers and not bullets! Please thank your kids for their help!

I think one of your ads caused my web browser to resize, you might want to put that on your blacklist.