Painting the house: He says/ She says

I unpacked in the kitchen while my husband sat in the family room checking our bank account.

“Paint? Why did you buy paint? What are you painting?”

“I’m painting a wall out there blue, and—“

“—You’re painting one wall BLUE? That is going to look HORRIBLE! You don’t even know what you’re doing!”

“Yea, well that’s why I hired someone—“

“You just hired some guy?”

“Yea, I know, but that was his offer, and this isn’t his main job, besides professionals were quoting me like $350-$450 for her room and—“

“THREE HUNDRED FIFTY DOLLARS? We don’t need to be spending that right now.”

“Why are you painting just one wall blue? That’s stupid.”

“It’s called an accent wall. And [Lil’ J] will have grey walls with a pink accent wall. Want to see pictures I’ve been saving on Pinterest?”

“Were you really going to have an opinion about her room?”

“But you still could have told me instead of just going out and deciding it all yourself.”

“See! And I knew you’d come around eventually.”

“So you knew I’d say no but you did it anyway?”

… Basically. I thought. Sometimes it’s easier to get forgiveness than it is to get permission.

“What time is the painter coming over?” He asked me.

“Are you just going to freak out over every answer I give you?”

“Where is he coming from?”

After the painter came and went I was giddy at the nice job well done. 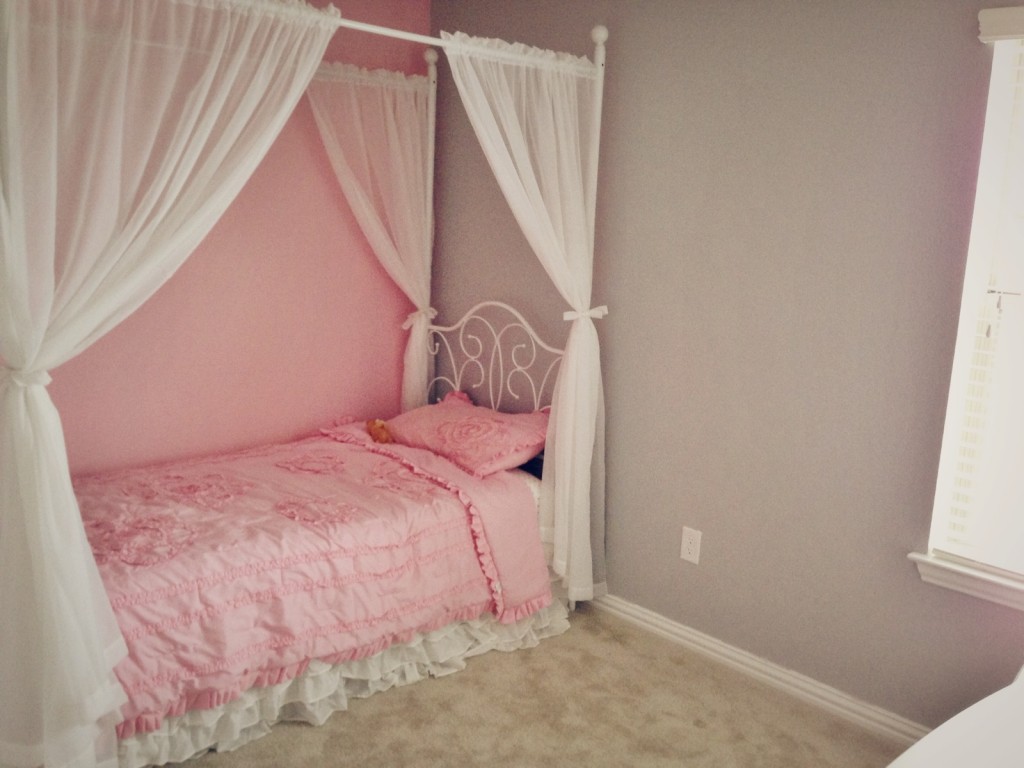 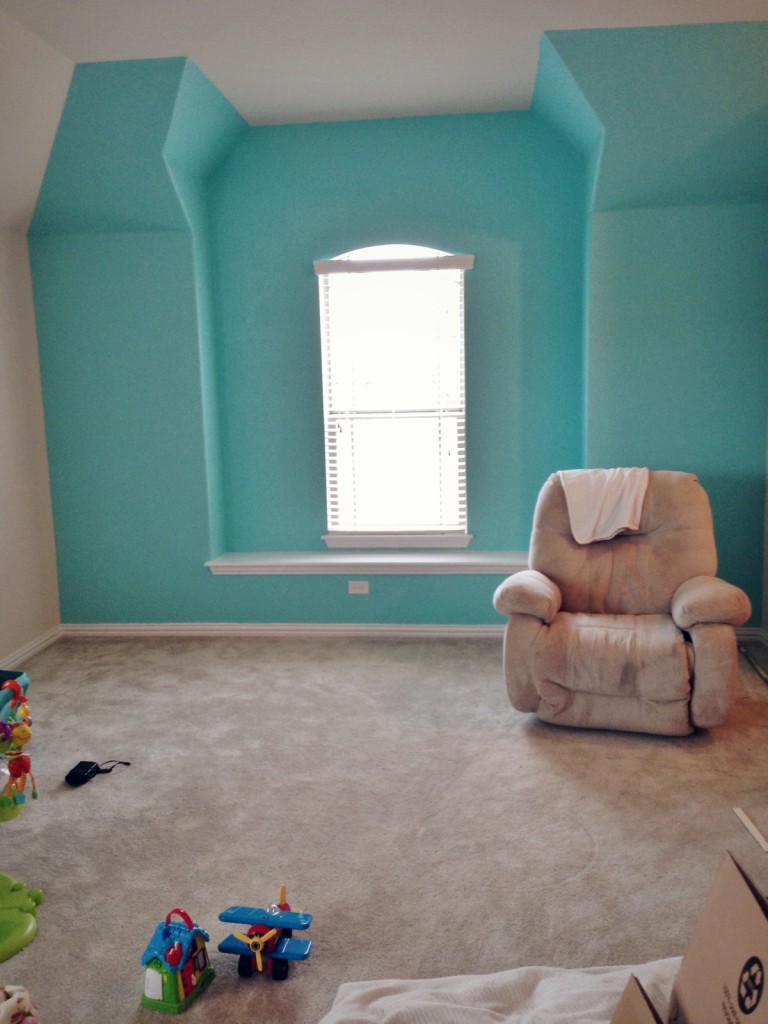 And that’s why I love him.

Hahaha I can totally picture you two having this conversation. Central, lol!

Haha, yep! I wasn’t sure if we were really arguing or just joking. At least it ended well.

That convo sounds like something my hubby and I would have, to a TEE!

Thank you! I picked the colors faster than I thought but I’m happy with how they turned out. Definitely worth the $100. I think I’ll hire him again soon! the TaskRabbit site is great for finding helpers!

hahaha!!! Sounds like the same conversation I have with my hubby any time I ask him to help me move furniture or I want to decorate the house. He is always very ” that won’t work… that will look weird!” but once it is all done he realizes he was wrong and says so!

When are they gonna learn?

It’s coming along nicely!! I can’t wait to see more!

Thanks so much! I can’t wait to show more! Gotta slow down on the spending 😉

Haha! Sounds familiar… He wanted to hire someone (like one or two of the guys that painted the house from the builder), I said it shouldn’t be that hard to paint a whole house. I’ve been following a few DIY bloggers (like House of Smiths) and we can knock it out in less than a week if we are committed… Yeah, never suggesting that again! We are hiring next time!

By the way… I.Need.That.Bed for my girl, where did you get it? So cute 🙂

I imagine I could paint but after seeing hoe long it took this guy who does it all the time, I was glad he did it and not me. There are some spots I wanna touch up, but I’d rather do a few touchups than the whole room!

Miss J LOVES her bed. It’s from Walmart.com girl! Got a good deal!

It looks great- and BTW, let your hubby know you got a bargain! We had the whole interior of our house painted for many times that!!

I think for some men paint is like makeup. They don’t understand the value & joy that comes from taking something from plain to fabulous. The walls turned out great. Love the blue in the playroom.

That was one of the sweetest post I’ve read in a long time (and I needed it!). Love hubbies that love their wives!

Love how the pink wall turned out! We’ve been doing a lot of redecorating lately but even with all the ideas swimming around my head I don’t do anything major (and neither does my husband!) until we consult each other first even if it’s “my money” vs family budget $ I figure since we both spend so much time in the space we should each have a say (and compromise if needed!). I too show him stuff on Pinterest that definitely helps him see the things I’m often subscribing and he’s come to appreciate the design blogs I follow. He’ll even turn on HGTV via our Roku on his own. It’s been a slow education, but the collaboration is worth it!

And y’all are good people. Nothing around here would ever change if I didn’t take some things into my own hands. That said, I’ll negotiate with him for some pretty colors on our bedroom walls and family room space cause he does spend more time in those rooms. And now that he’s seen how awesome paint is I think he’ll be more warmed up to the idea.

Love it! We just had my daughter’s and son’s rooms switched around and painted (we have boy, girl, boy and another boy on the way so the boys who will share need the larger space that was her room.)

The guy we normally use all our neighbor’s use….$275 for both rooms, including paint! And the larger room needed 2 gallons as it is bigger and has vaulted ceilings. I so happy with how it turned out!

LOL at your convo. The rooms look great!

I do that all the time. If i ask its a big fight and it doesnt get done. If i just do it, the fight is smaller, it gets done, and he agrees in the end

I absolutely love your sons walls! That blue is perfection. Your baby girls room is gorgeous too.

Reply
Planning on a lift chair for your household? Learn all about stair lifts says:
December 14, 2013 at 10:21 pm

I must say you have done a very good job with this. Also, the blog loads super quick for me on Opera. Superb Blog!|

I LOVE the walls!! But I especially love Lil Js bed! I am so stealing that for Isla when we have a house!!

Thanks a lot and I am having a look forward to touch you.
Will you pllease drop me a e-mail?

Hello, I wish for to subscribe for this webpage to take
most recent updates, so where can i do it please assist.

Hi it’s me, I am also visiting this web site daily, this
site is actually pleasant and the viewers
are actually sharing fastidious thoughts.

Thanks for ones marvelous posting! I seriously enjoyed reading it, you’re a
great author. I will be sure to bookmark your blog and may come back at some point.
I want to encourage you to definitely continue your great job, have a nice holiday
weekend!