Our Son in Pink: He Says/ She Says

For the past couple of months I’ve realized Big T is drawn to the color pink. He started pointing out colors (thanks YouTube) and his favorite to point out is pink.

We’ll be walking through the house and he’ll yell “PINK!” and point to Barbie car or one of his sister’s many tutus. I love dressing my kids in bright colors and the boy clothing can be so dull. So I jump at any bright colored shirt in the boys aisle at my favorite consignment store.

A few months ago that meant me picking up a pink button-down shirt for my son. Just the other day as I went to put a different shirt on him he noticed his pink one in the clean laundry basket and said “No blue. PINK!” And so I put it on. 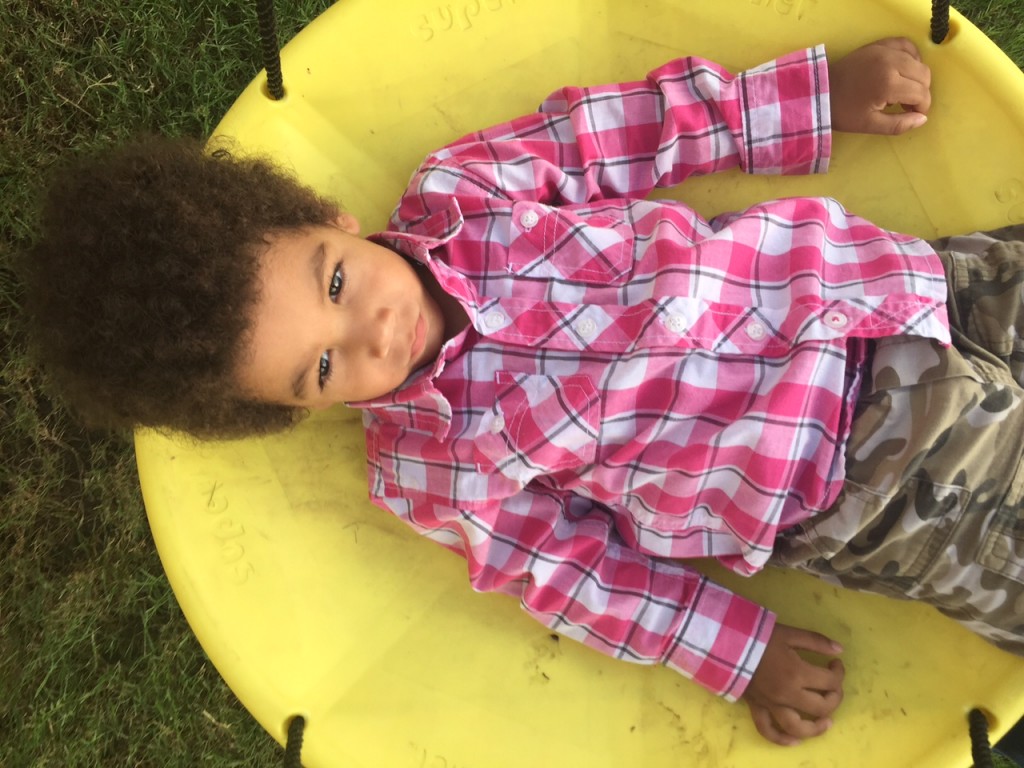 I find it adorable. It’s my favorite color too. And my husband doesn’t seem to mind like he once insinuated he would. But a couple of instances this week makes me wonder if my son is pushing his luck.

My husband came home from a shopping trip with our son and told me as they went down the cereal aisle Big T saw Elsa on a box and yelled “LET IT GO!”

He said it was hilarious and I told him he hadn’t seen nothing yet.

I pulled up the song on YouTube and set it in front of our son before stepping back to let my husband watch the show.

Big T watches the first few bars but then as soon as it gets to the “Conceal don’t feel, don’t let them…” Big T let out a huge… “KNOOOOOOWWW… they KNOOOOOOOOW! Let it go. Let it go!…” With choreographed hand motions.

I looked at my husband whose eyes were wide with amusement and shock.

“Ok buddy, hand over your man card,” he said. 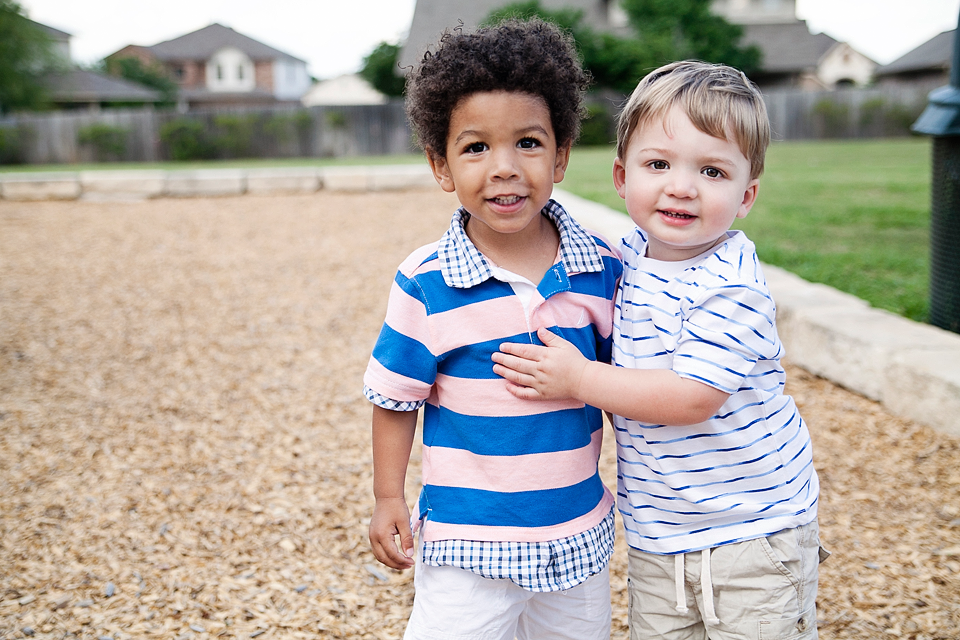 I couldn’t believe he hadn’t seen this before. They have Disney radio dance parties in the garage all the time and surely that song has come on.

Frozen was the first movie we took Big T to see in theaters, and the music has been playing on repeat his entire life. My husband wasn’t thrilled about our son’s talent for singing princess songs, but he was impressed. And with a song as epic as that, who can resist?

A few days later I was shopping for party supplies for my sister’s birthday party and we came across party hats. Our son LOVES hats. Any kind of hat or helmet, he’s a fan. Frilly hats that are PINK? Even better apparently, because that’s the one he wanted. 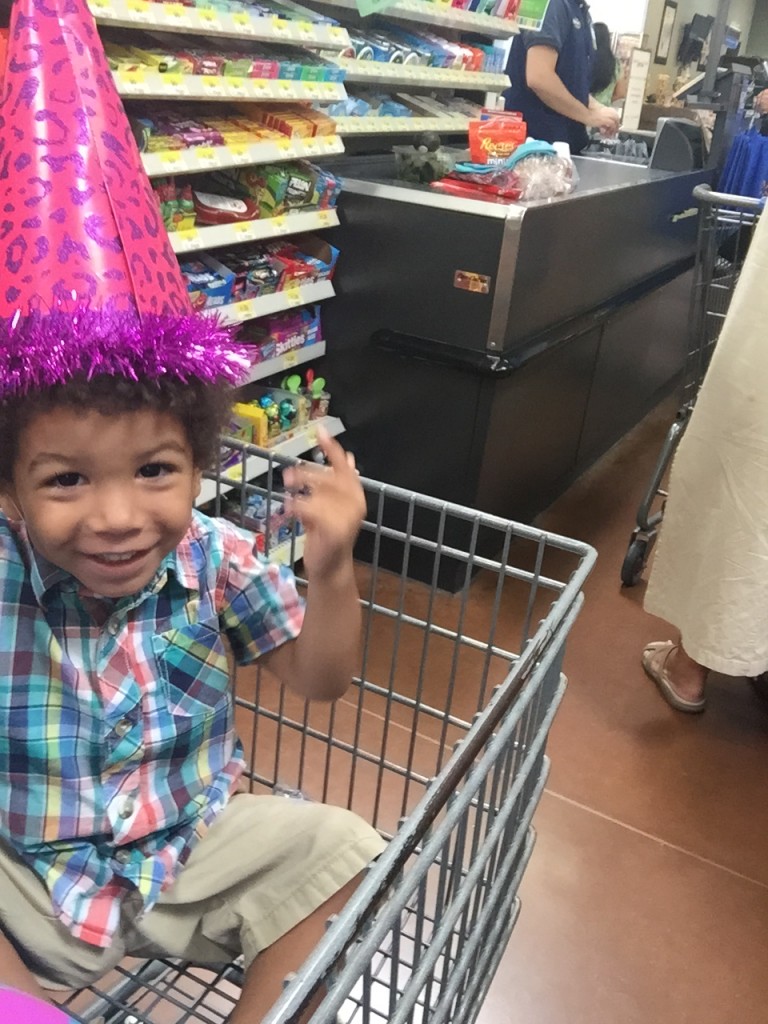 On clearance for $2 I picked it up, and he wore it through the store. He cried when I took it off so they could scan it at checkout.

When we rolled past the freezers he caught his reflection and grinned so big. Then I turned let him see himself in my phone and I caught the most adorable face. 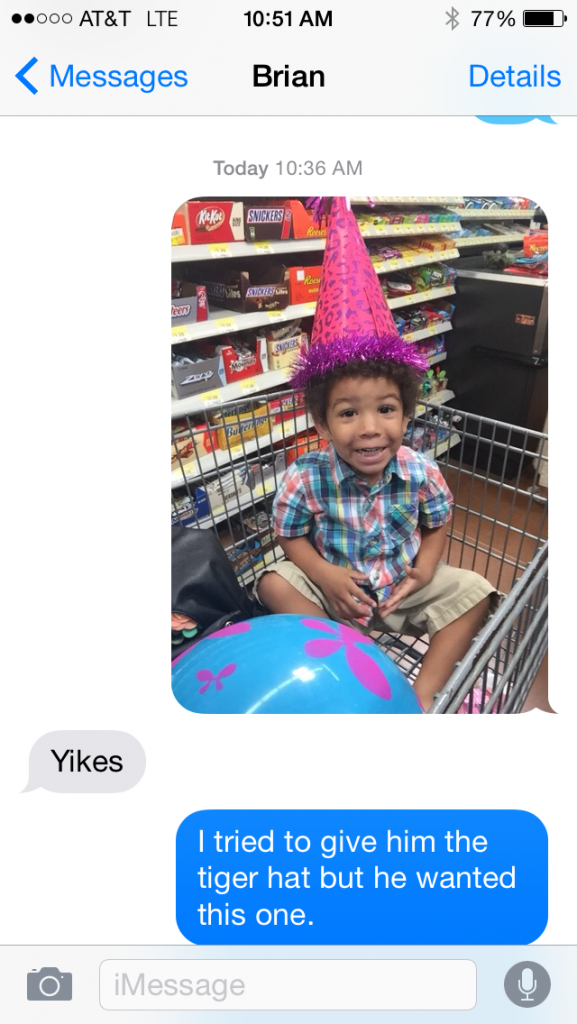 We have a wide array of toys for both of our kids to share and don’t designate them as for boys or girls. Our son doesn’t like playing dolls with his sister. He’s not a fan of dress up (yet). He loves to breakdance and push trains and trucks through our house. And goodness by golly, he loves him some pink.

Does your child love pink?

Tags: He says she says, he says/ she says

Ha! I love pink, but Thaddeus hasn’t shown an interest one way or the other.

And Thaddeus does love hats, too.

Haha. Big T just turned 2, so give it a few more months!

My son loves pink, too! It has been his fav color for quite some time. He’s dad isn’t thrilled at all, but doesn’t get too huffy about it.

Yay for team pink! How old is your son? I wonder how long my son will like it because I find it totally adorable.

He will be 6 in September. Don’t know how long it will last. Will kindergarten peer pressure stop him? Will he find other boys in kindergarten love pink, too? I’m curious to see.

I’m curious too! Keep me posted. We’re 4 years behind ya! haha

I think it’s fabulous. My second child’s favorite song as a 1-yr-old was Hoedown Throwdown from the Hannah Montana movie because it was his sister’s current obsession. Nothing got him rocking like that. (Since then, he has moved more towards his dad’s music and away from my Top 40s preferences.)

Just tell your husband that in 1918, the colors were actually reversed: pink for boys and blue for girls.

My husband will tell you his favorite color is blue or green, but it’s really purple. Silly man. Even our kids know that already. (Our bedroom is even a purple-gray color. People ask, “What does your husband think of that?” and I shrug and tell them, “He picked it.”)

Oh my goodness Erin your husband is too funny. I love that he tells you guys his favorite color but plays it off to other people. I wonder how many boys/men do the same thing.

He won’t even tell us his favorite color. I asked him last night and he said, “It depends” and my 7-yr-old yells out, “It’s purple, Mom!”

That’s a great idea! Totally gonna do that this week!

Aw, what a cutie he is. My son isn’t especially in to pink but he is in loooove with Frozen. He is always begging me to put his sisters Elsa or Anna dresses on him. And when I let my girls put on my lipstick he definitely lines up to get some as well.

Haha Tara that’s so cute! You are such a great mom. Seriously what kid DOESN’T like Frozen? haha. I wonder if my son will like playing dressup. Right now he only likes dressing up in hats and prefers to be shirtless.

Not pink necessarily, but definitely dress-up (I’ve got pics of him in an Elsa dress) and singing Let It Go all dramatically and wanting to play in my make-up. I think it’s all innocent and doesn’t mean anything, but sometimes daddies can get all bothered by things like that. THEY need to Let It Go. 🙂

Hahaha. Best comment ever! I’m totally using that on my husband next time! And I think it’s so awesome that your son loves dressup and makeup. I wonder if that’s next for us.

Hahaha pink is just a color. And supposedly, in Victorian times pink was for boys and blue was for girls. Who cares? 😉 It looks good on him! He is rockin’ that pink shirt.

Haha, thanks Sarah! I keep hearing pink used to be for boys. I think it could be his color 😉

Olivia likes the color blue! But I think it’s because when coloring with a pink crayon it doesn’t show up very well. Plus her nursery walls are bright blue (with pink accents EVERYWHERE).

Awwww. I love her nursery, you did it up so well! Lil’ J’s favorite color varies so much, I think right now it may be purple or blue… Blue because of Cinderella–her current favorite princess.

Moo is the pink lover in this house. JJ’s favorite colors are red (Spiderman) and light blue (Thomas the Tank Engine). They do enjoy playing with their toys together. I have to give it to my little guy, he’s very patient when his sister wants to play dolls instead of trains.

My son is 2y4m and he is obsessed with pink and with Elsa from Frozen. He has a big sister and he took over her Elsa doll that she got for Christmas. It goes everywhere with us. He just recently found her Elsa and Anna dress-up dresses and he loves to wear them around the house and belt out Let it Go! We don’t have a problem with it at all, though my in-laws do. I’m not going to burst his bubble.

Hi,
First seeing your blog and it’ fabulous. Articles are short, precise and sweet. I had to chime in on this because My two-year old niece has been singing this particular song all the time. her mother told me that once she received some clients, a man and his wife along with their daughter. She entertained them during one hour and the whole time the kid sat there singing the same song. At the end of the meeting, my sister-in-law asked the child about the song and the mother to reply ” what? don’t you know the song?” my sister: “no, ma’am”, the woman: “do you have kids?” my sister: “I do and she is one”, the woman: don’t worry you will soon know. My sister-in-law then went to a family gathering and all she hears from her nephews and nieces is “la reine des neiges” song. Eventually my niece turned two and also got the” frozen ” song fever ever since. *le sigh*
P.S: we live in french-speaking countries so the french version of the song’s chorus- the only part I can also remember- is “libérée, délivrée, je ne mentirai plus jamais”.