I don’t know what my deal is, but lately it’s been a dream of mine to be “that mom” who surprises the class with some homemade delicious snack or party. But let’s face it, that’s not really in me. Well, at least not to some people’s standards of “Martha Stewart Mom.” But I am perfectly happy with being fairly adequate and making semi-homemade things that may start in a box or pre-packaged container. Yes, I’m ok with that.

So it shouldn’t surprise me that I was totally fine with my Pinterest project (an attempt to make oreo turkey treats) not coming out exactly like the photographs. 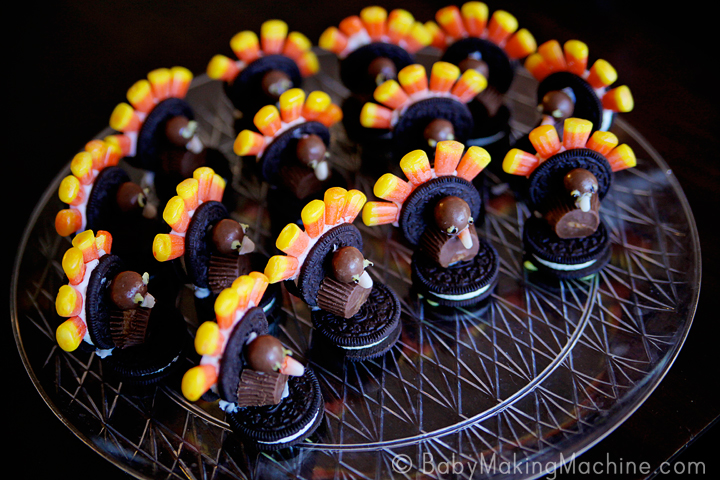 I won’t post the original because 1. I didn’t ask permission and 2. I don’t want you comparing mine to theirs but I will happily link you to the tutorial I used in case you’d like to take a stab at these too.

I’m completely in love with Pinterest, and even though I’m only able to takle a project here and there, just pinning ideas somehow makes me feel like I’m being productive when I’m really not.

When I came across the pin I said “Hey, these look easy enough” and decided I’d attempt to make them for my daughter’s class.

After this experience I’ve realized something: Nothing on Pinterest is as easy as it seems.

While I wasn’t exactly pulling my hair out by the end of the project, I definitely was sweating a drop of frosting in the wrong spot, a melted Reecies butter cup, or heaven forbid, a broken cookie. 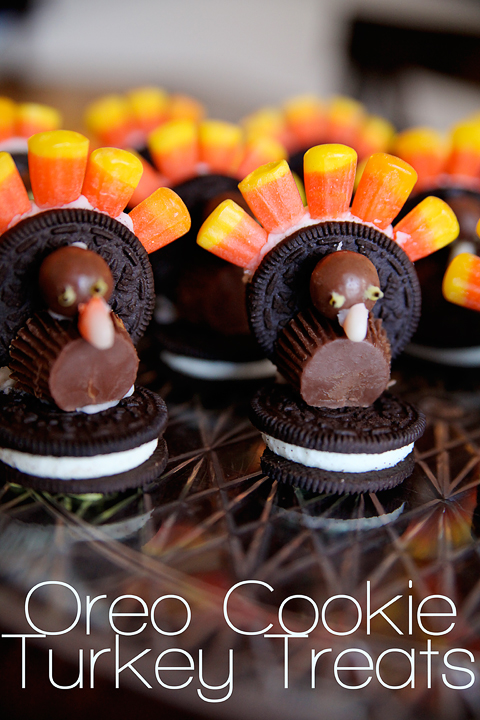 Getting them to stand and stay put, or getting the candy corn to go in without cracking the cookie took a big of practice, but I can say the end project was a success. Even if it took me an hour and a half to make 15 of them. I know they aren’t as cute as the example but I’m not a talented food artist. My husband told me they look great, and his and Lil’ J’s approval are good enough for me. 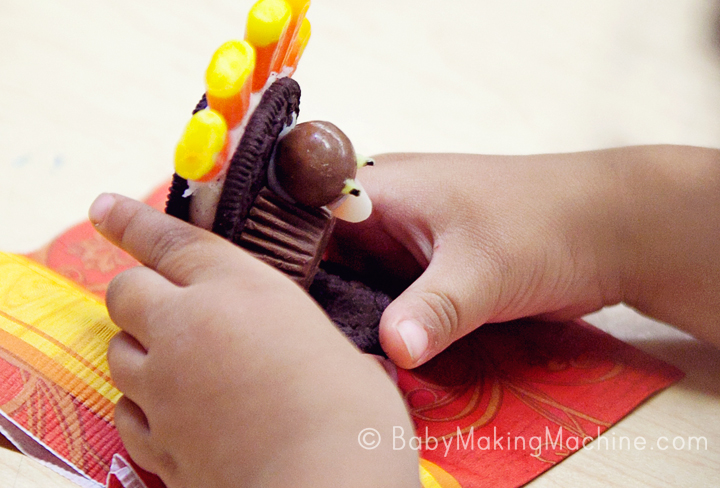 When Lil’ J woke up I told her I finished the turkey cookies and she ran to the kitchen to see them all lined up. She yelled “gobble gobble!” and pointed out which one was for which of her friends. She couldn’t wait to show all of her friends at school, and share. 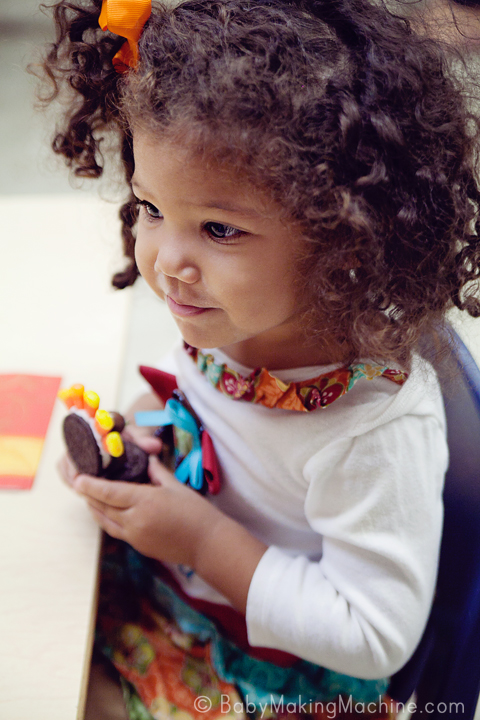 Who cares if the treat was all candy, chocolate and more and more sugar. Or that it wasn’t exactly homemade, rather made at home. It was definitely a proud mom moment for me. Hopefully there will be many more in the future involving recipes, an oven, and healthier ingredients.

They look great! I’m kinda jealous you get to make fun stuff like Oreo Turkeys.

My mom was one of “those moms”. She always came to class parties with cookies, cupcakes, cakes.. all homemade. I’m trying my best to be like her but it’s a bit more difficult to do when all the ingredients are slightly different living overseas. 🙁

these look amazing! i’m sure the kids loved them. kudos to you!

They turned out great!

Girl, we are so much alike! Lol! I tried to made a cake that looked like a bunny one year for Easter and it was pretty much embarrassing, ESPECIALLY with a side by side comparison to the original. But thankfully, most people in real life have pretty low expectations. Haha. Just the fact that you got in there and tried is enough for most families. Kids don’t care – they are so easily excited! I bet you made Lil J proud!! And by the way, they don’t look bad! Lol!!

Awww, they turned out super cute, and I’m sure all her little friends loved them 🙂

I totally made fudge that looked like candy corn packaged in cute wrapping to send for my daughter’s class for Halloween. Then for thanksgiving, I made fall cake pops complete w the cute packaging. I love surprising the kids and the teachers love it. The truth is I love this stuff but I have never had time until now to do it (lost my job and taking time off). I’m not perfect at them but you do develop patience! I didn’t know it’s annoying to do this stuff lol. My husband asked why I was all suzy homemaker now haha
Btw these look perfect!

I think they’re absolutely adorable! Them not being perfect means here home made 🙂

Thanks for your personal marvelous posting! I certainly enjoyed reading it,
you might be a great author.I will remember to bookmark your blog and will come back sometime soon. I want to encourage one to continue your great posts,
have a nice weekend!