When Preparation Meets Opportunity: An Interview With Oprah, Reese and Mindy

I ordered room service so I could have breakfast in bed and gather my thoughts, but I had no appetite for food. It was all getting to me, and I was losing it. I FaceTimed with my husband and talked through my questions for two hours. Yes, two hours of writing and re-writing with a side of sudden crying fits.

“I’m just so nervous,” I told him. “And probably hormonal.”

I’ve mentioned how this moment had been on my dream board for years, but I didn’t explain all it took to make this happen.

About two years ago I set a goal to do a Disney movie event. I originally had my sights set on Moana but a month after attending the premiere of The BFG, The Variety announced Oprah was cast for A Wrinkle in Time. I knew this would be my moment.

In actuality I didn’t really know FOR SURE she’d be an interview at this event. My husband guessed she was too big. But I knew I wanted to get in that room.

Let me tell you something. One thing you’ll hear Oprah explain a lot is her belief in “luck”. Luck doesn’t usually just come out of no where. It is the crossroads where preparation meets opportunity. You set a goal and do what you can. You work, prepare, get ready for the moment of opportunity to step in. And then you let go and be ready to receive it.

For two years, I worked toward this goal. I wrote movie reviews, attended specific events and wrote lots and lots of interviews and preview posts about TV shows and movies. It didn’t take over my blog or anything, but if you do a search you can see these sprinkled in here and there.–All with the hope that the chips would fall right where they should. And that I would get invited to this particular event, and that Oprah would decide to be a part of it.

Today was the day preparation was meeting an opportunity. It was all finally coming together. Yet I couldn’t keep my emotions together.

I cried and cried in my hotel room. I’m not really not one to cry much, but I couldn’t seem to turn off the water works. Would this be how it was when Oprah walked in the room?

Fast forward a few hours. We were at the W hotel, waiting for her to come in the room. I’d visualized this moment countless times. From the exact place I’d be sitting (front and center), down to when I’d ask a question. 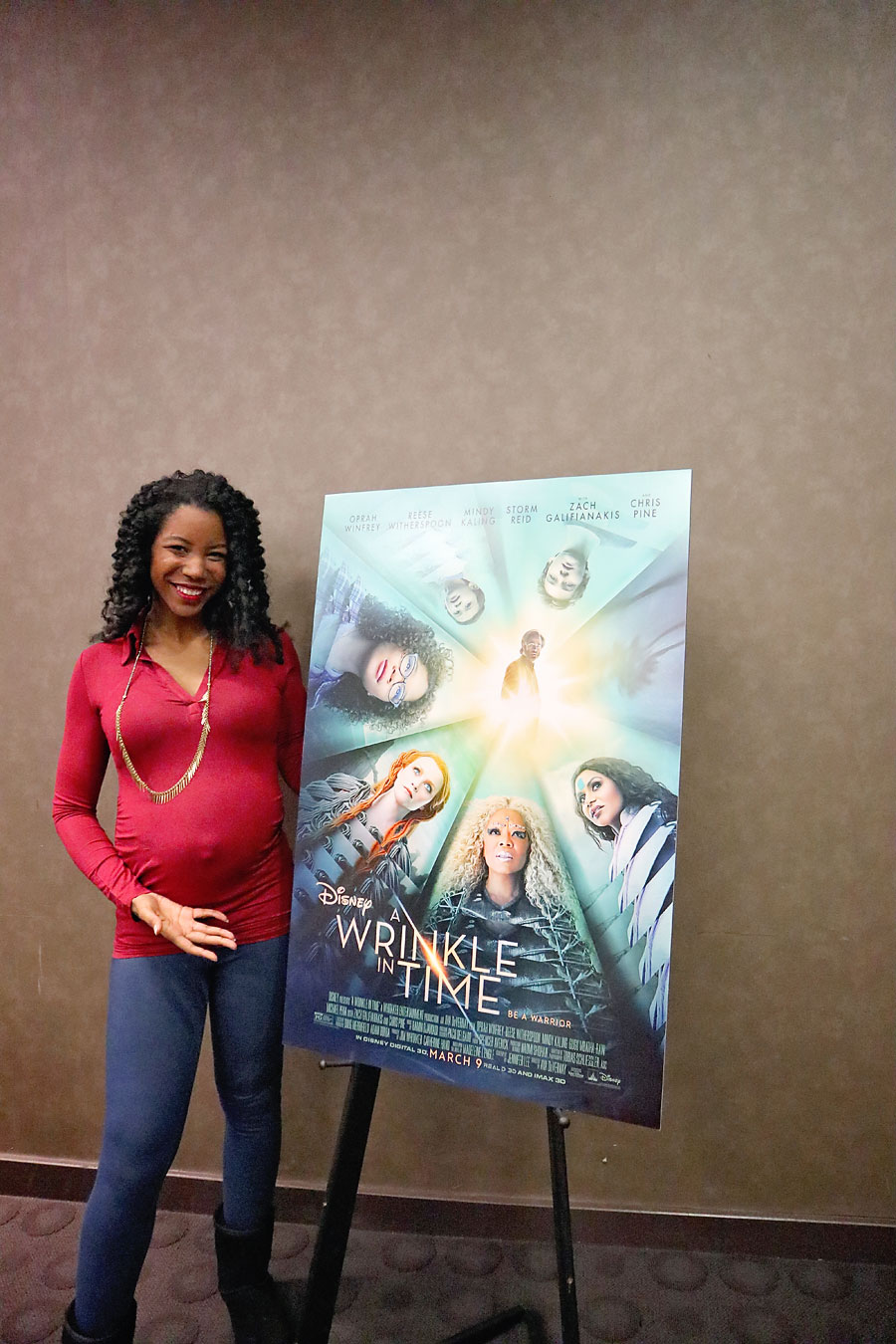 I about jumped out of my skin when our Disney rep picked me to ask the first question, and at that point all I had to do was let everything come together and be present.

Ok, so I’ve been going on and on about Mama Oprah, but the interview was also with Reese Witherspoon, and Mindy Kaling. Two additional superstars in their own right. They play the three Mrs. (if you you’re familiar with the book) or guardian-angel-like characters of the film. I framed my question to be addressed to the three of them.

I told them how inspiring they were, and I asked the three of them how they hope this movie and their roles in the film inspires the next generation of girls.

“We’ve grown up watching you–,” I directed the next part of my question toward Oprah.

“I RAISED Ya’ll!” She interjected.

“Yes! You did! You raised us!,” I said. “And my daughter was like ‘You’re meeting Oprah? Cool! Who is she?'” I explained how I had to introduce my 7-year-old to her amazingness. “So how do you hope this movie will inspire the next generation of girls?” 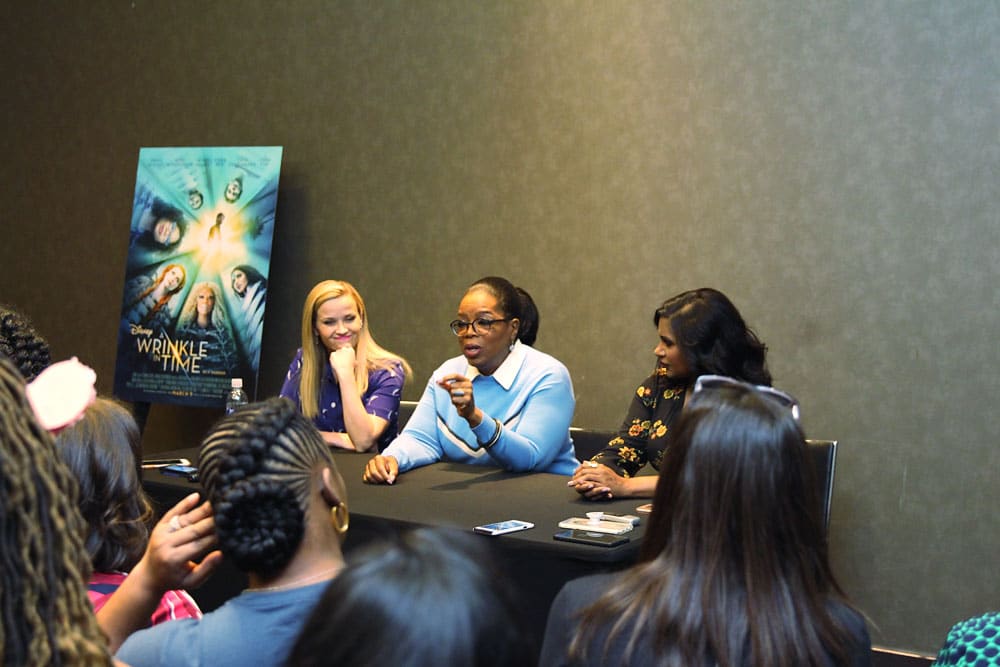 “Well I think that’s a great question,” She said. “Part of what I loved about making the movie that I think is also in the movie, and you really feel it, is the power when women are together.”

“We’re not against each other. When we get together, we create abundance,” Reese said. “That’s been a driving part of my career. The more I collaborate with women, the more we create for each other. So I think that’s a concept that we need to put into our little girls’ brains.”

We rise by lifting others.

Oprah and Reese both turned to Mindy Kaling to hear her response next.

“I think just that the cast is so inclusive,” Mindy started. “I’ve never seen anything like that and I think that as a young woman I would have felt so much joy from watching it.”

She said she would have felt so much happiness. And I pictured all the little girls who will feel the same as they see themselves represented.

“And as a dreamer, as I was, I wouldn’t have to dream quite so hard to picture myself on screen,” Mindy said.

Time for Mama Oprah’s response. She looked me dead in the eyes and gave it to me.

Oprah Winfrey on Inspiring the Next Generation

“Well you know, what I do know for sure is that everybody’s goal, whether they can articulate it as such or not, is to live a life that matters and a life that has meaning,” she said. 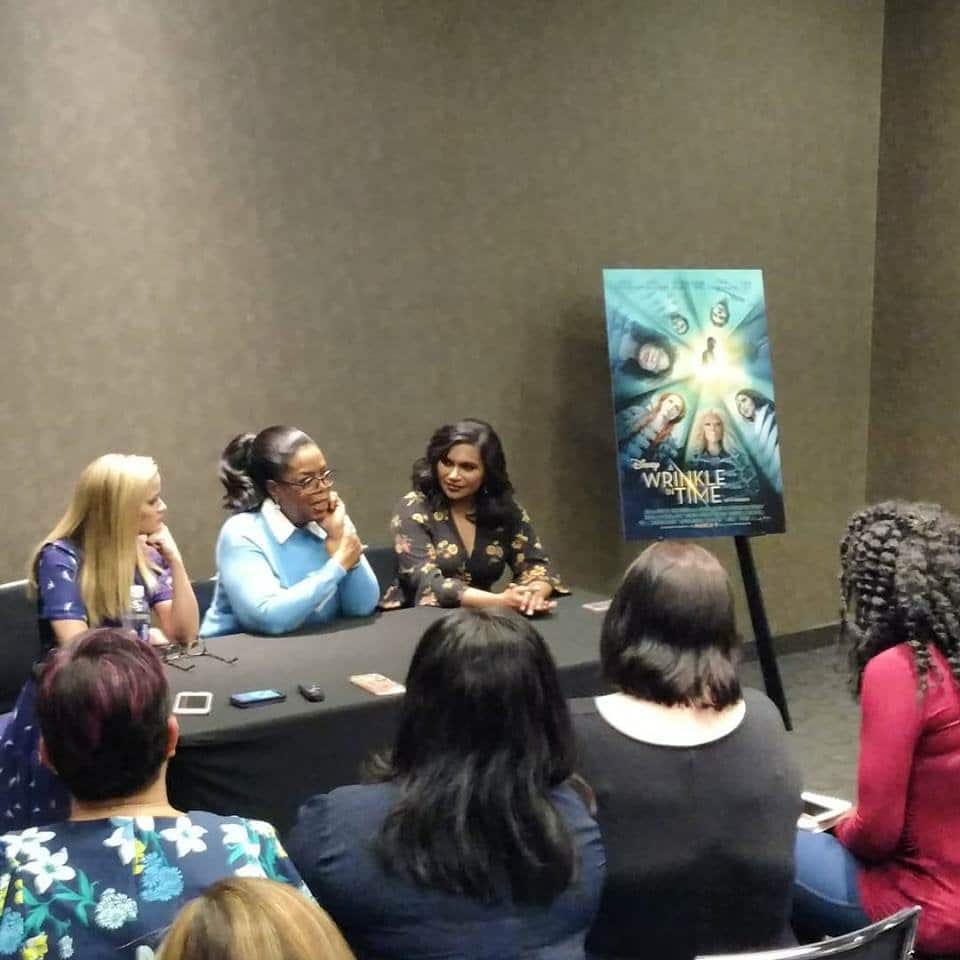 She said she thinks of her little hand and heart prints all over the Oprah show for all those years is a magnificent purpose.

“But I also knew when we were doing this film that there would be young girls like your daughter” [IMAGINE MY FACE HERE TRYING NOT TO FALL APART] “who would come along and they would see the Mrs., and they would see me and they would say, ‘what do you mean she had a talk show?’ And the imprint, the heart print that you eventually will leave in this world will come from what is said in this movie. And so for your generation that I helped to raise there will be generations to come that will be raised on this story.”

“I could feel that when I was doing it,” she said. “That wow! There’ll be kids who’ll say, ‘What? You used to be on television?’ And pretty soon they’ll be saying ‘what’s that? What’s television?'”

The interview went on for another fifteen minutes or so and the three women had us laughing about everything from conversations about admiration for J Lo’s butt, to sperm, eggs and positions to make an exact person. And then we were near or in tears comparing favorite quotes from the film. You can find more bits of our interview by searching on Twitter or Facebook using the #WrinkleInTimeEvent hashtag. But I wanted to share the moment that really touched me, and give a little more insight to how it all came together. 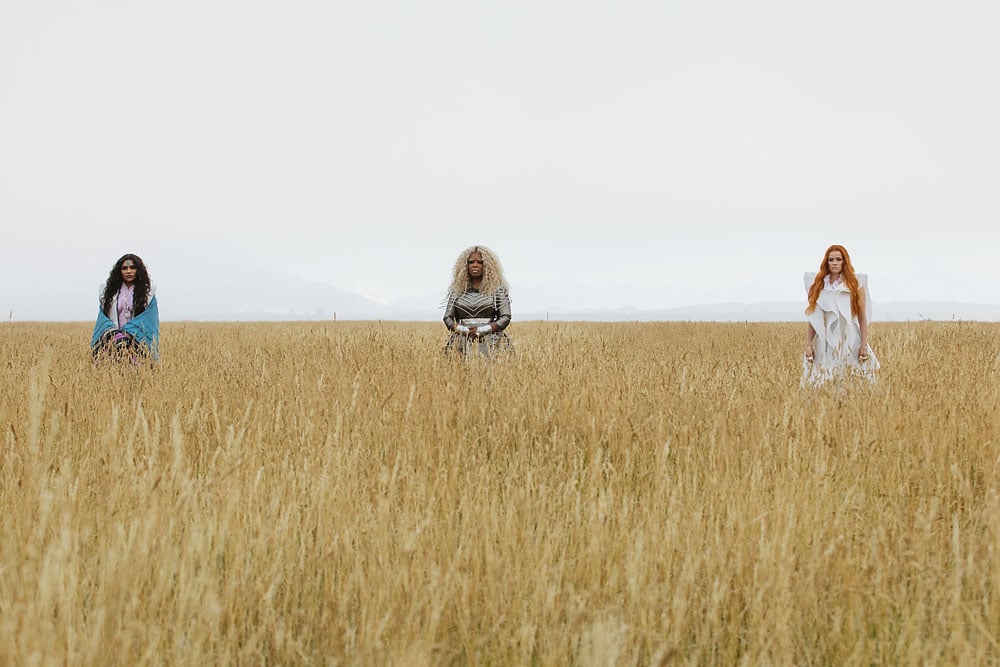 After the interview we took a group photo and Oprah stayed behind to shake hands, give hugs, and allow us to soak in her aura. She even walked back in during lunch to see what we were eating. For the next several hours I was stuck in a serene reverence. It seriously took me all day to process what had happened. And more than a week later I’m still coming down from that high.

Before, I asked if you’d had a vision board. Now that you’ve (hopefully) made one I hope you’ll look it over and ask yourself how you’re preparing for those opportunities that are coming to you. There’s been more than one occasion this week where I’ve thought or said “I met Oprah, I can do anything.” The opportunity didn’t just fall in my lap. It took action, work, and preparation. And in the moment I felt like the luckiest women alive.

Over the next few days I’ll have more interviews from the cast including Ava DuVernay and Storm Reid, as well as a movie review! Don’t forget A Wrinkle in Time hits theaters everywhere this Friday March 9th!

You are such a beautiful soul. I am so grateful I was beside you when you asked that question, as well as for the rest of the day.