So, I had all these plans to watch The Bachelorette on my flight to New York on Monday. I had an evening flight and knew we’d be in the air just before it started. I started browsing the channels before we took off and WHAT? No ABC!

So here I am, recapping the show a day and a half late. I stayed off twitter and avoided spoilers only to realize it was a DANG CLIFFHANGER anyway!

Alright so let’s jump into the guys meeting her family.

Eric could not have said less enthusiastically “Wow, this is going to be… Interesting.” 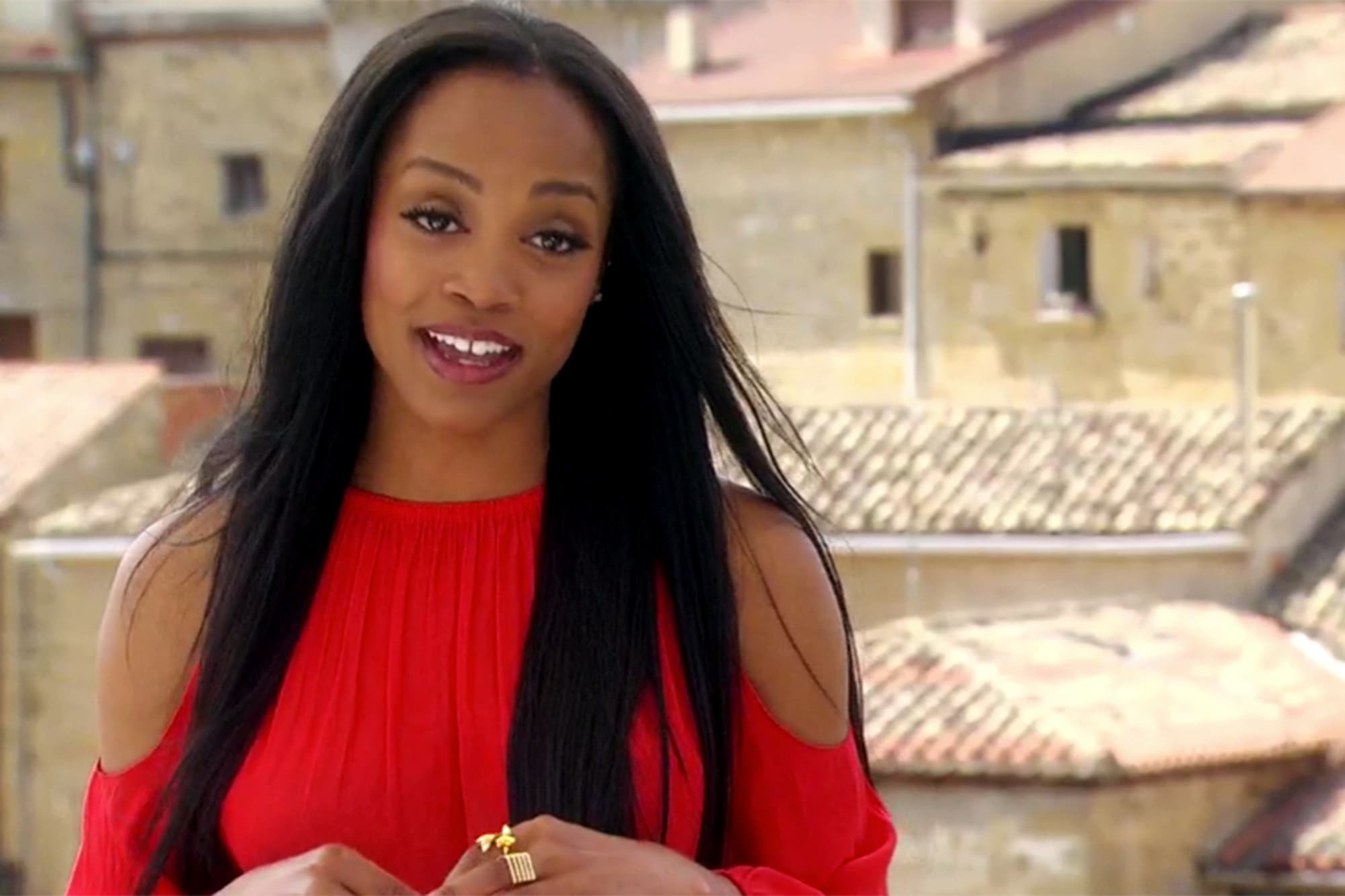 Rachel has to choose between a dork, an uncommitted, and a phony. And her family feels exactly the way I feel about each of them.

Last week Peter said he wasn’t sure he’d be ready for en engagement at the end so naturally they go shopping for baby clothes on their date today. Mmmk. Despite the awkward situation they seem just ordinary and comfortable together. Peter seems to be REALLY good at reading her. But I’m still salty about last week.

Before walking in to meet her family Peter clarifies that he is in fact, falling in love with her.

Rachel says she’s falling in love with him too, which as we saw last week, means absolutely nothing and she might send your butt right home.

But then he surprises us all and tells her family how he’s feeling at the dining room table and I melt.

Her family seemed to love him, Rachel’s cousin even nicknamed “winner”, and Rachel and Peter both had the sweet puppy eyes as he left.

And just like that I’m back on #TeamPachel… For now.

Ok, can we talk about how awkward it is that her final three are in a hotel together right now? It’s obviously serious with them all and this is just not a healthy situation.

Eric is next up to meet the fam. On his date with Rachel and he’s clearly nervous. Rachel is trying to make him feel better and giving him tips for talking to her family. He asks what she sees in him and she laughs and says “you’re alright!”

Every time they’re together their “relationship builds” but I get the feeling it’s not building at the level or pace as the others. Anyway… On to meeting the family.

He meets them and does better that I expected but the family just seems to be thinking what I’m thinking… “That’s it?”

Eric feels comfortable and welcomed into the family. But his sister calls exactly what I’ve been thinking.

“I’m listening to Eric talk as we meet him, I’m watching Rachel reaction, watching the interacting and comparing it to what she had with Peter and I’m thinking ‘I don’t know if they are on the same playing field as far as ‘relationship-wise.”

Rachel’s cousin calls Eric sweet and sincere like she called Peter but we didn’t get to hear her elaborate. I imagine they cut out all of the “We like him, but not as much as Peter” conversations. They all *like* Eric but don’t see him as THE ONE for Rachel. And I agree.

BACK AT THE HOTEL

“So is that the matching watch?”

OH SNAP! Dang girl, you couldn’t wait to put it on until you were away from the other guys?

Bryan is going in saying he expects Rachel’s family to be impressed. And Peter calls him a Miami guy with swagger.

Why does he seem like he’s trying to win a game? THIS IS WHY I DON’T LIKE YOU.

He wins Rachel’s friends over with his swagger and Rachel admits she thought he was a douchebag at first. The rest of American still does.

Bryan calls his mom the number one woman in his life always and ALL the red flags for up.

Rachel’s mom hears that too and calls him out and asks for clarity… She wants to make sure that he will put Rachel above his mom if they bump heads. Then her brother in law starts to fire off about sincerity and basically they are calling him on all the questions I have.

SEND THEM ALL HOME!

In Spain Eric annoys me first. Rachel doesn’t beam over Eric. And she keeps acting him to articulate WHY he loves her. I think she’s expecting swoony-Bryan answers and she’d just not going to get that from Eric. I want to like him but he just seems like he has a lot of growing up to do and isn’t husband material nor on her level.

Also, every time he says “no more” instead of “any more” I correct my television. I know he can’t hear me but it’s habit. I do it to my kids too and I’d do it to my husband. So if Eric were my husband I’d be spending much of my days correcting his grammar. I imagine that would get old for both of us fairly quickly.

Eric is sweet, he’s cute, but he’s a bit of a dork. I’d be ok with him being the next Bachelor and correcting my TV all season.

Peter and Rachel meet at a vineyard and get their own wine locker/jail cell thing.

Peter once again tells her he’s not sure he can get engaged at the end of this and while I love his honesty I’m annoyed at what else he wants. Are you just not that into her?

I think there are one of two things going on. 1. He is about as into a Rachel as the rest of them all, but not drinking the TV/ extravagant vacation coolaid that is making the other two seem more into her than they really are. He’s being realistic.

Or 2. If Peter isn’t 100% into her while in an faraway romantic place then will he even be once it’s all over? Probably not. Which is why I’ve come to the conclusion that she should pick…

NONE OF THESE FOOLS.

Hit that panic button then press and hold reset, Rachel needs a better batch than this. I think she sent some guys home too early and kept others way too late (hello, Lee?!)

Despite my annoyance with all three of them, the sexiness and down-to-earth feel of Peter cancels out enough of my annoyance to makes me like him the most either as the one with her or as the next Bachelor.

But based on the cliffhanger I’m thinking It goes from 2 to 1 pretty quickly. Maybe she sends Eric and Peter home at the rose ceremony.

Who are you liking right now?

PS: What is it with this “falling in love” talk? I mean, what does that even mean? Is it a cop-out way of saying I love you without having to actually say I love you?

I like Peter. I find his honesty refreshing, especially for reality tv. I personally think he is the best choice of the three. I think Rachel is crying bc she actually has fallen in love with him. I think he is reserved bc he doesn’t know where she stands with Bryan and he doesn’t want to get hurt. If Rachel did not have strong feelings for him (love) she wouldn’t be crying over him. Trust me, if Eric said what Peter said to her she would NOT cry over him. I dont even think she is interested in Eric, she would probably walk away.

I literally told a friend the SAME thing today! If Eric said he didn’t know if he’d be able to propose she’d be like “K, BYE!” she would not be crying! Peter is my favorite too, I just wish he’d dive in cause I think they’d be so great together. I’m worried he’s not really THAT into her. Slightly embarrassed at how invested I feel in these TV relationships. haha

My first recap read of yours! I personally like the honest of Peter, what’s the big deal if they don’t end up engaged??? Yes, it’s what she wants, but clearly their definitions of engaged are very different. I like Peter a lot.

Hi Jennifer,
My name is Lauren and I work at NETGEAR – we are a tech company specializing in computer networking. Our Arlo brand specializes in security monitoring and we recently released the Arlo Baby. We love your blog and think you’d be a great fit with the product. We were wondering if you’d be interested in reviewing the product?