I was watching Bachlorette with some girlfriends, and it must have been the episode where the guys do a little striptease for Andi because somehow we got on the topic of pole dancing.

Leah was all “Oh, you’ve gotta see this video of this chick pole dancing, she’s amazing!” Then we huddled around her cell phone watching in amazement as a woman much larger than myself did all kinds of acrobatics on a pole. In one word, it was inspiring.

You know how it goes when you’re chatting with your friends. One things lead to another and next thing you know you’re searching Yelp to see if there’s a place you can take some kind of exotic dance class. I mean it’s never too late to teach an old dog new tricks, right!?

We decided based on our age, schedules, and let’s face it… ability, pole dancing probably wasn’t for us. However we were all very interested in trying hip hop (which we also spend a good amount of time searching vine and video instagrams for).

“Hip hop is one thing I would love to do,” Lindsey said. We all agreed. Though we’re so beyond the age where hip hop dancing is cool among our friends, we thought it would be fun to learn, not to mention a good workout. Within a week we were signed up for a class and learning a routine.

Let me break it down for how the class goes. We do a warm up that practically kicks our butts. Then our instructor, who I don’t even thing is old enough to get into a club, shows us a new moves and we all laugh/gasp/shriek at the thought of attempting.

I give her the are you being serious right now? look and she’s all did I stutter?

Next think you know we’re doing handstands and a move called the “running man”, which contrary to my understanding, is not the late-80s move that’s done on your feet.

This past week that included doing a breakdance freeze move (I think that’s what it’s called) balancing using our hands and head. It’s hard to explain and you wouldn’t believe it unless I showed you anyway so here we are: 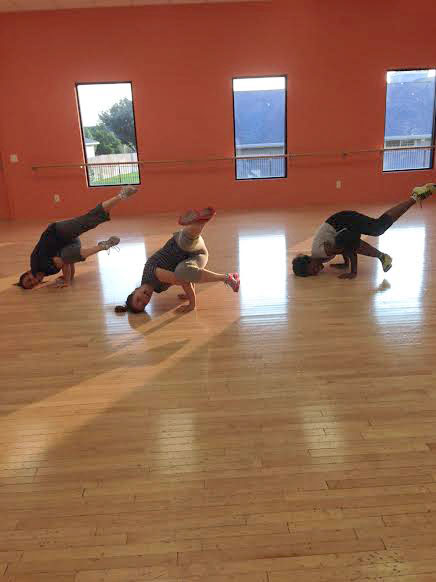 And then after sweating to death doing all those dance stalls, we move on to actually learning a dance routine.

Last week I had this awesome idea to record ourselves now that we’ve finished learning the first song. In my mind (and from what I saw in the mirror) we were killin’ it. Crankin’ out some sharp moves right on point. Then watching it on playback all I could do was laugh.

Now a month in, what started as an almost-dare has become my weekly solace. I look forward to getting out alone, not having to worry about work or kids, and just doing something I enjoy for fun.

A year ago, if you asked me to join you for a dance class I would have thought it sounded fun, but not taken you up on the offer. Back then I felt extremely guilty about doing anything for myself. I was away at work so much that by the time I got home, I felt ready to spend every extra moment with my kids.

Now that I see them so much more, I am really enjoying any chance I get to do something by myself. But looking back, I shouldn’t have felt guilty before. It’s so important to get some time alone. Or doing something for yourself. Especially after becoming a mother.

At 28 I’m learning a new skill… (Is this considered a skill?) that is for not benefit other than having a good time.

It’s not about being good or looking cool (though we think we look cool) it’s about enjoying something for us.

Next up, learning how to twerk! Just kidding.

Get it girl! That’s kinda how I feel in Zumba. I really want to learn to twerk!

ummm AWESOME! LOL I love this!

Austrian media outlets reported that he was bitten in the leg, but that report has yet
to be confirmed. Isn’t it great when a film can do more than entertain, when it can actually inspire people
to educate themselves and take part in something important.

and, alas, the German people did not heed the warning against Hitler.

Thank you, I have just been searching for info about this
topic for a long time and yours is the best I’ve came
upon so far. However, what about the bottom line? Are you positive concerning the supply?

Girl, you crack me up! I don’t have the kind of friends who would do a hip hop dance class with me!!! And no way I would have the nerve to do it myself. Ha ha. But it sounds so fun. You’re never too old to learn new things and have a great time! I wanna see this video!

I have read so many articles about the blogger lovers but this article
is truly a fastidious post, keep it up.

This piece of writing is truly a pleasant one it helps new
net visitors, who are wishing in favor of blogging.