When I was growing up, the idea of a fun summer break was diving into books. I’d go to the library with my mom and check out a half a dozen books at once. Sweet Valley High? Yes please!

I could sit in my room and read all day getting lost in the stories of Jessica and Elizabeth in Wakefield.

My parents got annoyed when I would ignore my younger sister. She’d sit and watch TV or… Actually I don’t even know what she was doing.

Heather is four years younger than me. So naturally I wanted nothing to do with her. We got along ok, but we just didn’t have a lot in common. My parents made me put down books to play with her, or get her to read too.

I always found that kind of strange. But I’d hand her a book and told her to pretend to read it.

Fast forward twenty years. Maybe I was a little mean to my younger sister back then, but now I’m getting payback with my youngest sister. Kimberly and my daughter have a similar age gap. They’re five years apart. Since they don’t live together, they’ve pretty much always enjoyed getting together and playing together since they were young.

Lil’ J ADORES her Aunt Kimberly. But now that we live a mere mile apart, sometimes there’s some sibling-like contention. And when I get involved it’s like sibling rivalry Xs 3 because Kimberly is still my younger sister. And of course things are way different for her than they were for me at her age.

My saving grace in keeping the peace is having an activity planned for them to do together. I hate it coming to that… Having to actually put effort into planning something fun (don’t I sound like an awesome mom?).  My mom wasn’t creating intricate little activities for my sister and I when we were younger. But I’ve found it’s worth it in the end. 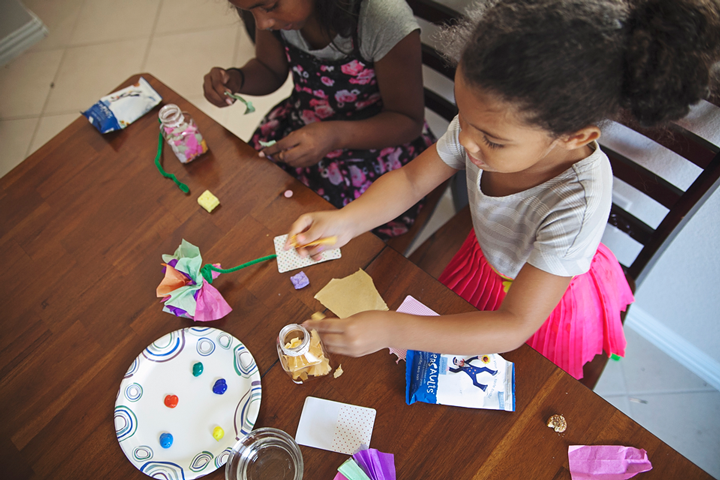 Something as simple as printing coloring sheets, or picking up small puzzles or activities from the dollar store can mean the difference between a good afternoon or a bad one when they’re playing together.

Last week Lil’ J and I started to open an Avery & Austin box, that promises to be provide a perfect playdate. She loves anything to do with art or crafting, and can easily sit and work on a project for an hour. As she picked through the box I remembered that it was for two kids and I asked her who she wanted to invite over to play.

“KIMBERLY!” She said with a big grin on her face. “Let’s call her!”

When my almost 10-year-old sister came over I was able to hand over the box and instructions and let them do their thing. 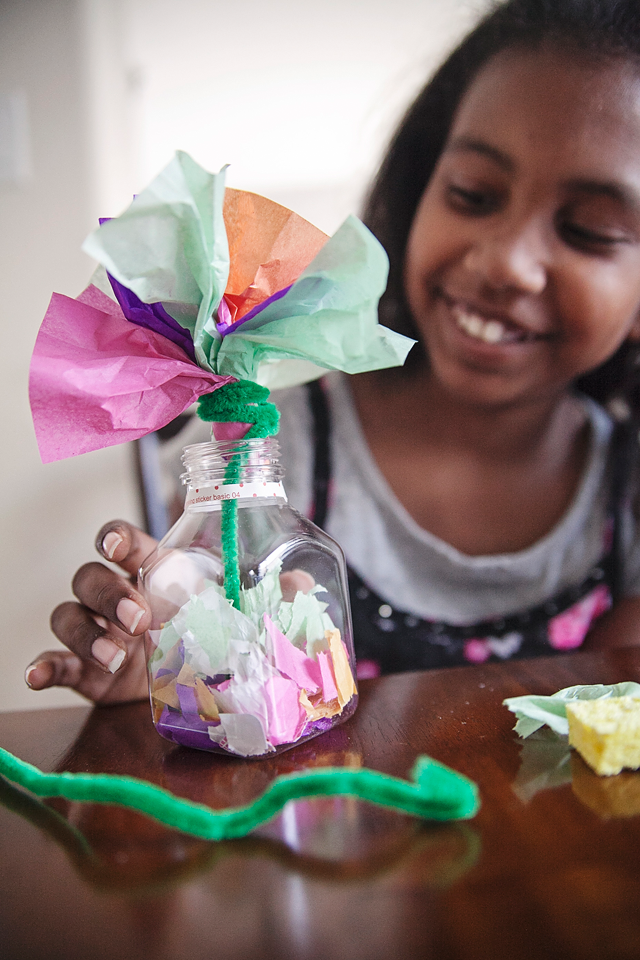 Did you ever watch Barney? You know you did. Watching my daughter and sister go through the Avery & Austin box was like watching the kids pick through the Barney bag. “What can we make today? With our imagination and the Barney bag, let’s see what we can make today… Yeah! See what we can make today.” … Wow, I just typed that all from memory. Admit it. You were singing it in your head too. 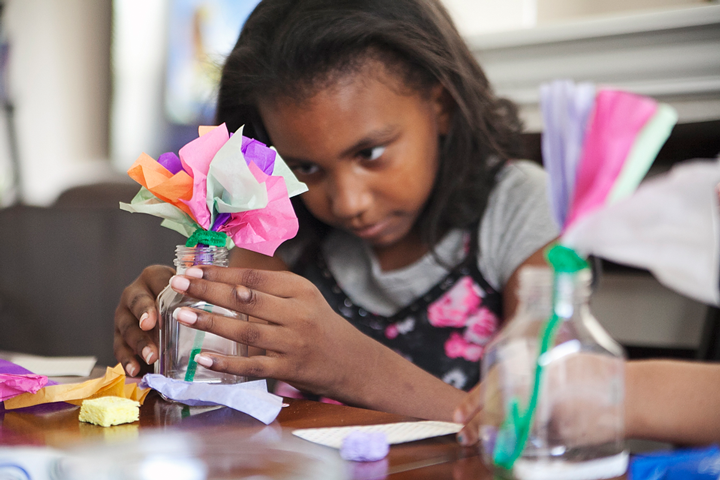 Remember how those kids dug through that ginormous bag like it was the coolest thing they had ever seen? That’s the look I saw on their faces. You’d think they’d been deprived of crafting their entire life.

“Oooh, what’s this?” My sister asked me.

“Umm, it’s called paint,” I said. But the acrylic paint was in a nice tube, and different from the usual watercolors we use.

They found tissue paper, plastic bottles, washi tape, cards, stencils and sponges… Everything they’d need to make a couple of crafts together.

I then watched as they unrolled a ceramic bowl wrapped in bubble wrap. They were going to use it to hold the paint until I realized that it was a jewelry dish for ME. 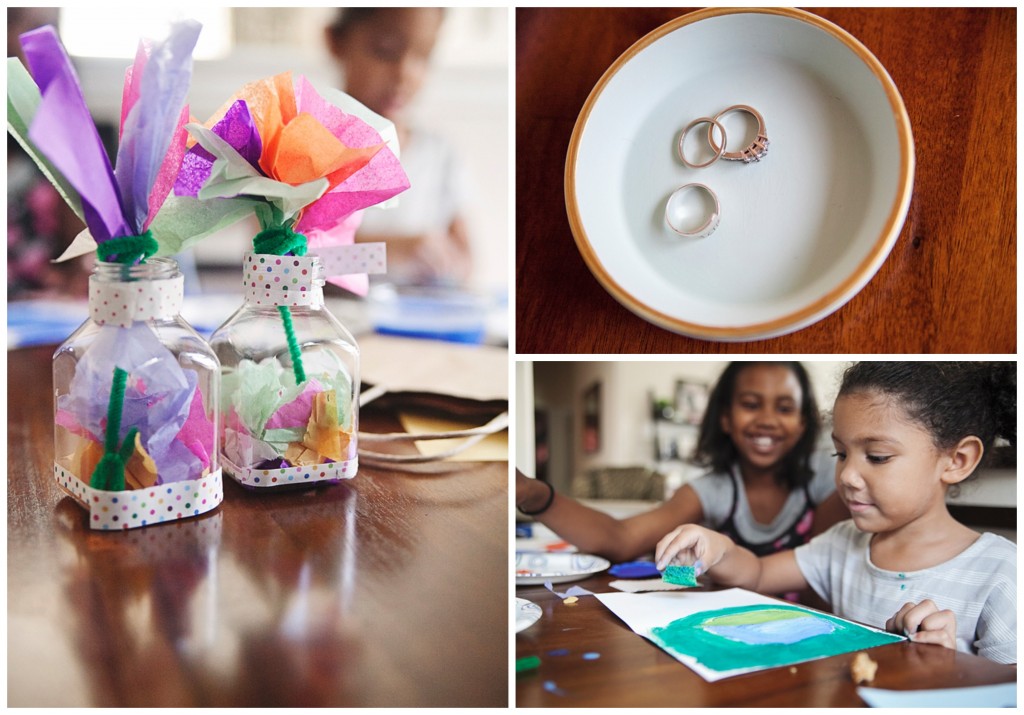 As the girls got going with their activity, both in good spirits, I realized this was my chance to go get some work done, and enjoy an afternoon with little disruption.

There weren’t any arguments or tears. They were having such a good time and I kinda just wanted to be a part of that. 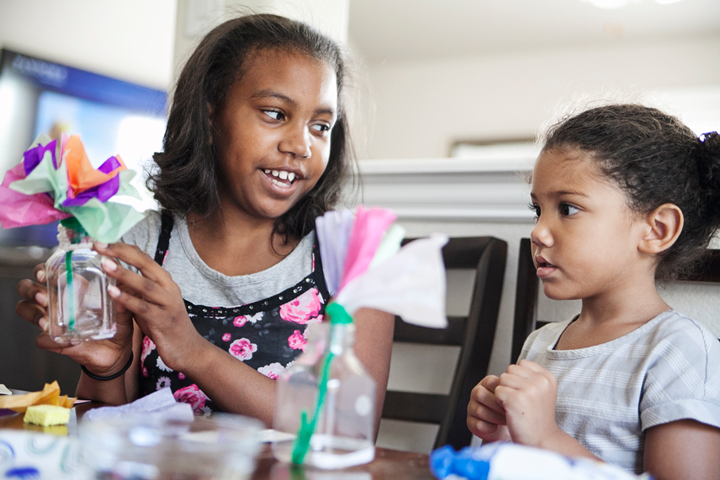 I used some of the extra supplies and helped them add on to their crafts. For once it was nice not having to worry about finding and getting craft supplies before they got together, planning a snack (that was in the box too),  and anticipating arguments.

Was this the secret to ending a pseudo sibling rivalry? It just may be. At least once a month when it comes in the mail. It’s a secret I’ll keep in my back pocket for other sibling issues down the road.

In the end we were all happy. They were proud of what they each had created; and I was glad to have been deemed a cool mom, a fun big sister, and to have pulled off a #perfectplaydate in peace. #Winning 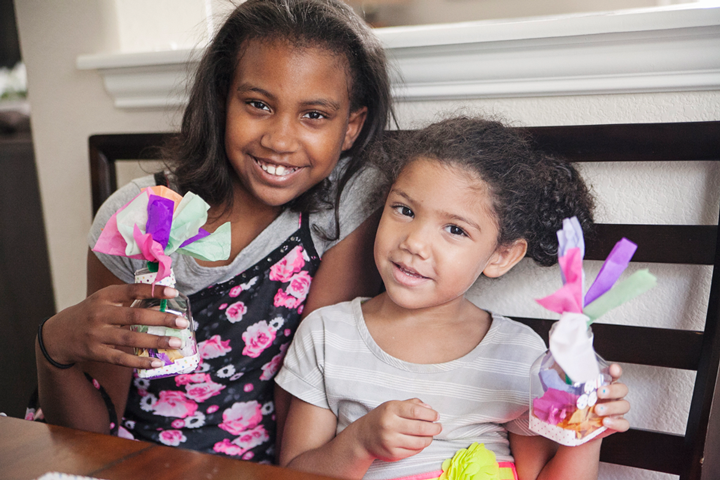 What’s your secret for getting your kids to play nice?

*This story was sponsored by Avery & Austin. A monthly subscription box that holds everything you need to host the #PerfectPlaydate. Especially great for moms like me who like to pretend like we have it together. Just have it all set up when your friends arrive and hide the box it came in. No one will ever know! *wink* All opinions expressed are my own.

Oh, and if you want to give this a try find out more about Avery & Austin here. Or enter this giveaway where three people will win a three month subscription!
a Rafflecopter giveaway 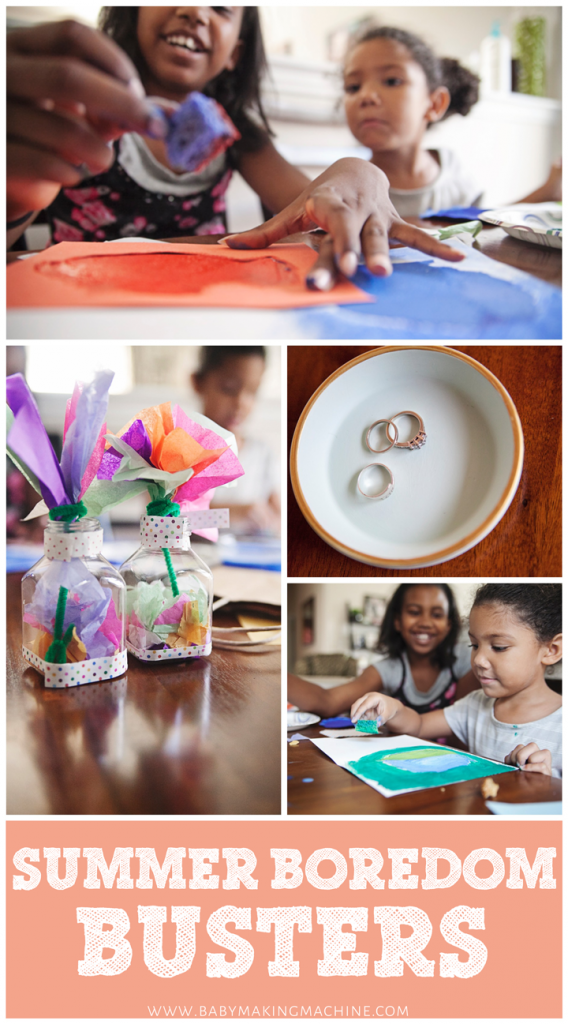 Love this! Your little sister and daughter are so gorgeous! These look like a lot fun! 🙂

Thanks so much Ashlee! They are so cute when they’re getting along 😉

And yes, these things were a lot of fun! Can’t wait for the next box!

I like this what a great way to get them together. they are both beautiful.

What cute crafts. Girls love crafts, this is definitely a great activity for them to do together.

My little girl does for sure. I’m really hoping that my son does soon. Right now he’s not a fan of getting his hands messy. ha!

We’re always looking for new crafts to try. This is a new one for us, but my girls will love it!

It’s new to me too, but we’re in love now! Happy you found it helpful 🙂

They are both beautiful girls, as your little sister in 10, that is old enough to behave and treat her niece with kindness, my boys got along and still do in there adult years even when the oldest had t baby sit the younger two while I worked. and he was babysitting at 9, h was so grown up for a child and we already put him through advanced first aid and CPR classes, was her perfect oh boy, no he was not, he gave me more gray hair then any parent needed, but he was wonderful with his brothers and everyone else he baby sat for, he was in high demand, because he just did not baby sit, he got right down an played with all the children he watched, projects are great for children, in the summer when I would have a day off, I would take them on picnics and swimming and all things like that and in the winter is when we would go get projects for them, so when they could not play out side, they had something to do. crafts are the best, remember make sure your sister is reminded of how important it is to be a good Aunt, The more she here’s it the more she will learn what a big job she has as an Aunt and the more she will want to be good at it. GOD bless and good luck.

Thank you Penny! You know, your words really resonated with me. I think I”ll hafta sit down and chat with my sister about being a good aunt, and I’m sure with a loving approach, she’ll be happy to step it up. My daughter adores her, and although she talks a lot and it can be much after a while, she should still be nice to her 😉 (and most of the time she probably is).

Love your activity and your post! Making crafts and gifts are so memorable! My mom kept everything I made! I will spread the word regarding the craft box, what a great idea! (Awesome photos!)

Aww, thanks for sharing Lisa. And that’s so sweet your mom kept everything you made! I know my mom kept a lot, and I try to as well.

I’m an only child, as is my daughter, so I can’t say I know much about getting siblings to get along. I have noticed with my daughter and her friends that more than one other friend at a time leads to fighting. No more big sleepovers for us, thank you!

This looks like tons of fun! I hate to gender stereotype activites, but do they offer more of “boys’ themed playdate crafts?

Haha Marie, I’m not sure what you’d consider “boy” themed but so far it seems like all of their activities are pretty gender neutral. I’ve seen bird houses, planter boxes, rocks, and the cards and paint we got came with fish and hand stencils. Here’s another review of a mama who played with one with her son: http://www.cloudydaygray.com/2015/04/the-perfect-play-date.html

Beautiful girls! Crafts are a great way of bonding…as long as there is plenty of supplies to go around:)

If they want dessert at the end of the day, then they must be kind to one another. This seems to work better for the older ones than younger ones lol.

I’ve found that planning an activity or craft for Moo and JJ to do helps cut back on their disagreements a lot. I’m looking forward to keeping them very busy over summer break.

I have no idea how I’ve never heard of this…but I think it’s a stellar idea! I entered your giveaway, and I’m crossing my fingers! :o)

Hey Jennifer, I just stumbled across your blog through Pinterest and your family is just sooo beautiful! And your blog is amazing too! Keep up the great work 🙂