I was so excited Lil’ J wanted to take pictures in her Merida dress because 1. Merida rocks, and is probably (next to Mulan) the coolest Disney Princess ever. And 2. She princess shares an awesome hairstyle with Lil’ J. No extra prep-work needed, just take the braids down and let her play!

I got her dress second hand off ebay for a great deal. Here’s a similar Merida Dress. 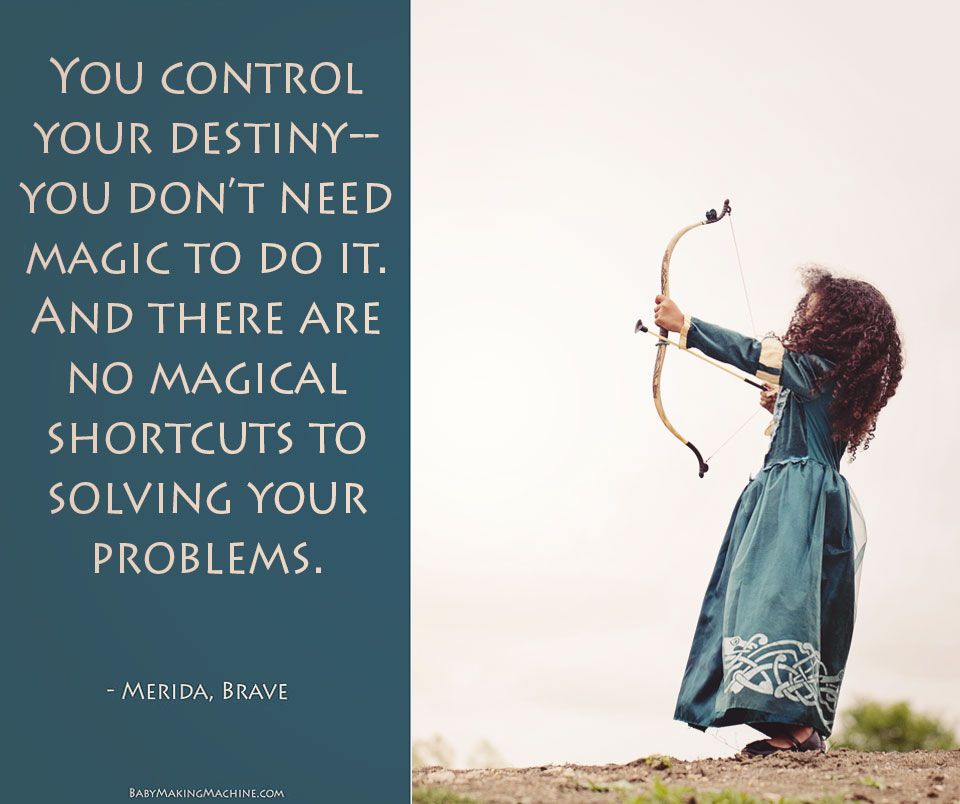 I realized later in the afternoon when her hair was twice this size that we probably could have taken the pictures later to have it’s full effect, but she still rocked it. 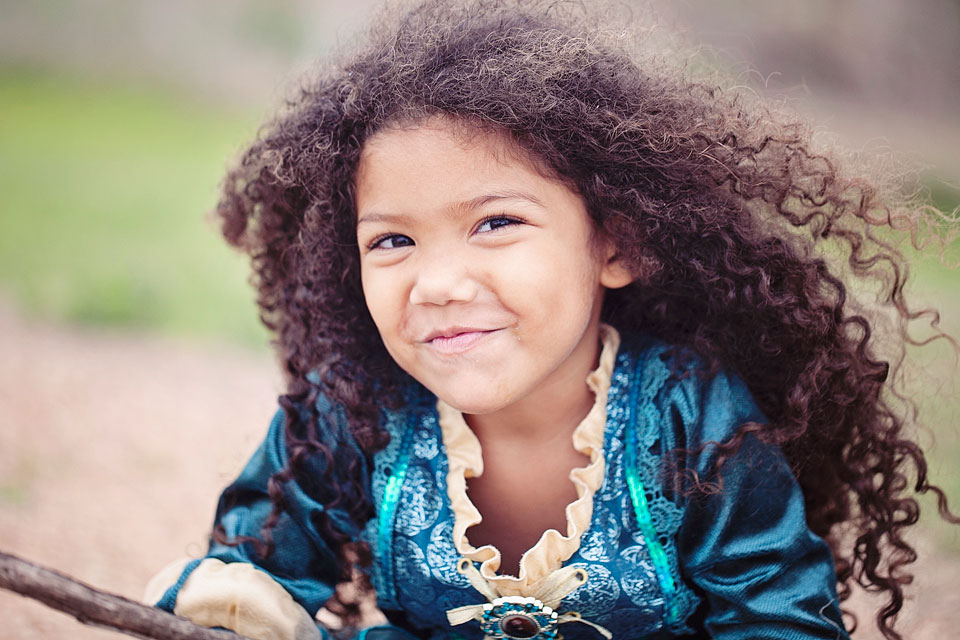 Of course I’m talking as if I was in charge but little miss was all “take a picture of me on this hill!… No, not yet! Ok, now!”

And “Ok I’m going to be brave and go and get my arrow, you can take a picture of me.”

We traded cameras and she took a few photos as well, and checked out my work. 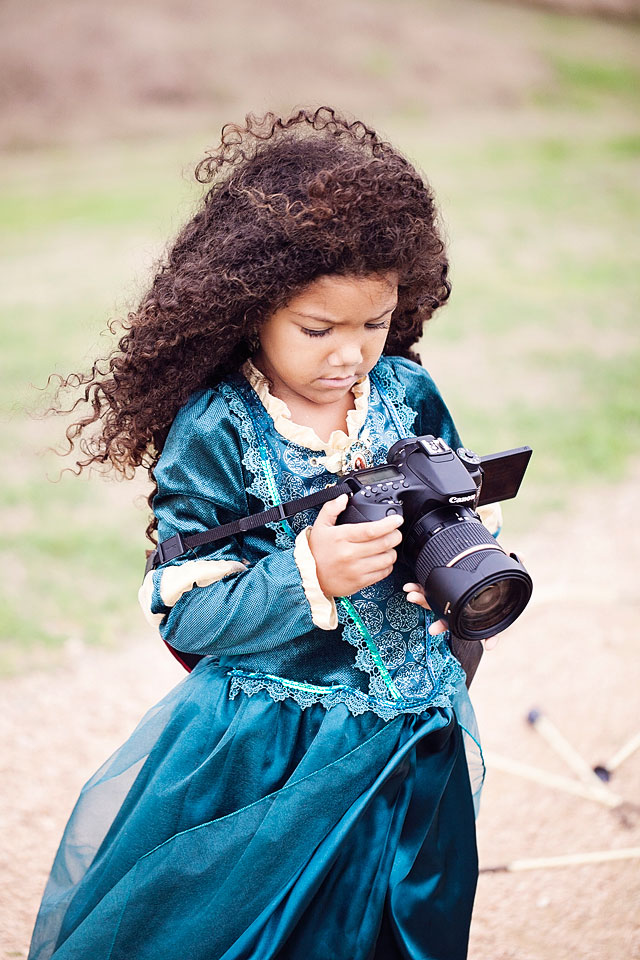 This was the third princess we’ve photographed her as, but the second I’ve shared, and definitely the one she’s gotten the most into. The bow and arrow, poses were her idea. The initial location idea was a collaboration, then she had me follow her.

We watched Brave again last night and I’d forgotten how much I loved the mother-daughter story. I’m excited to see where else this little adventure of ours takes us. 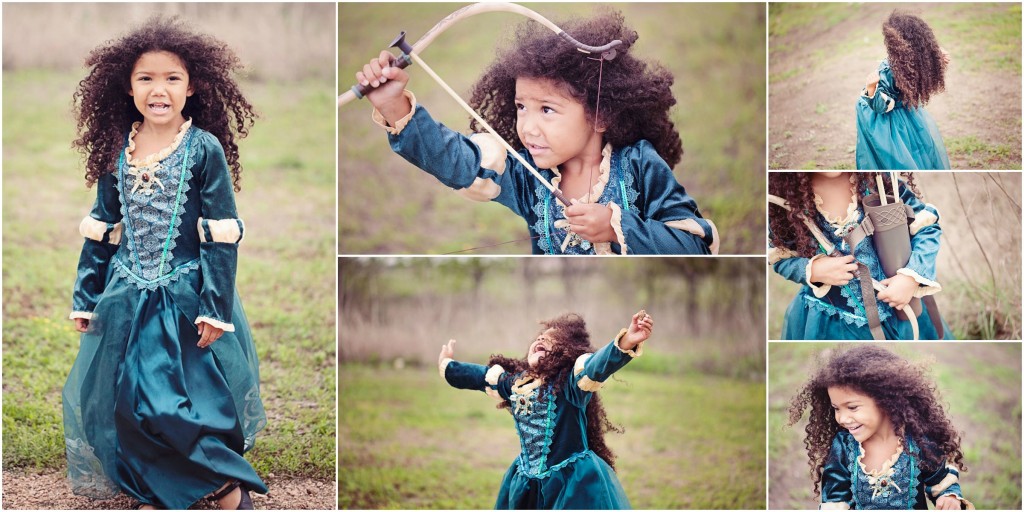 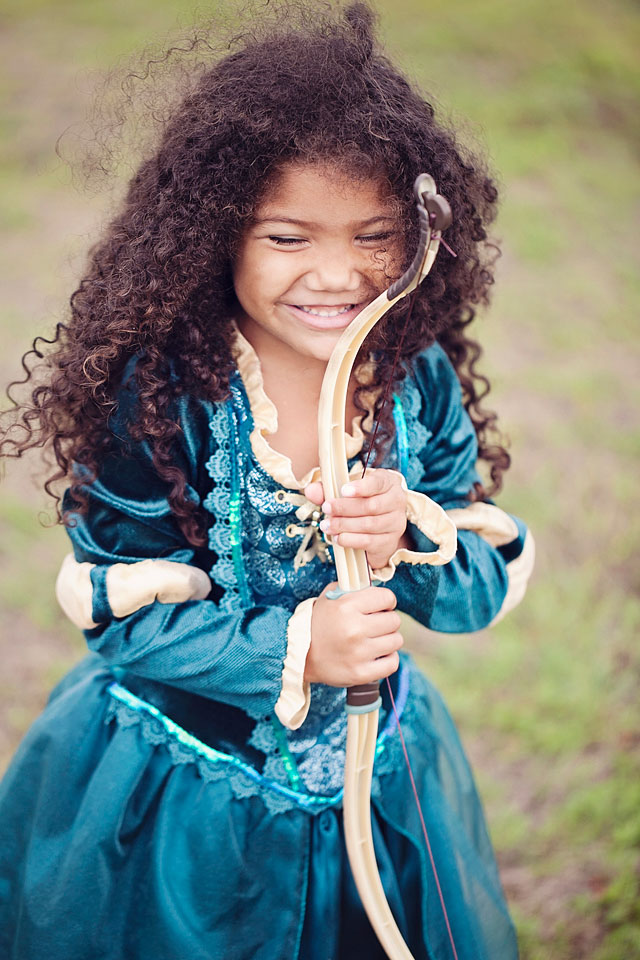 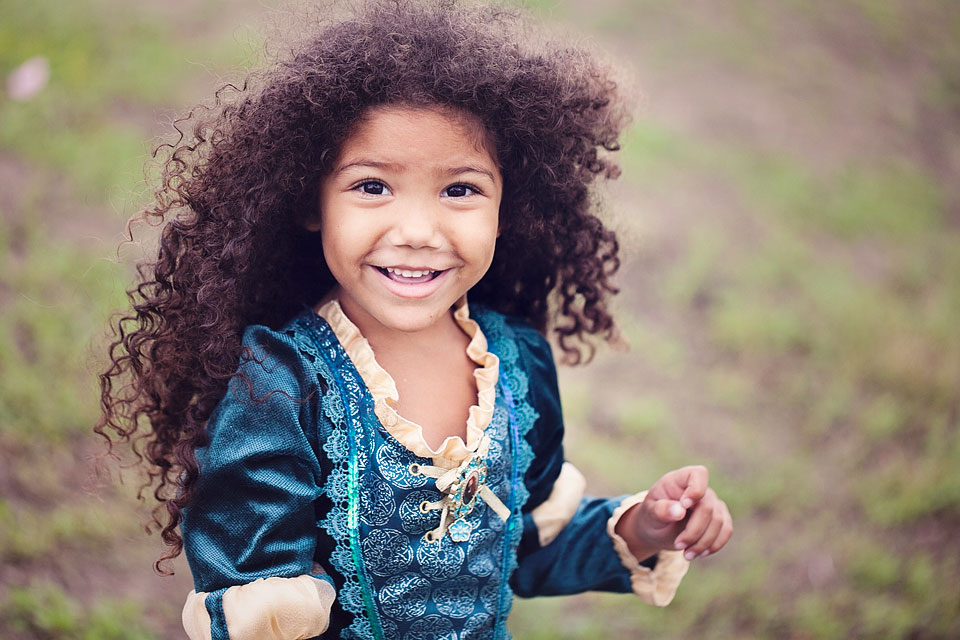 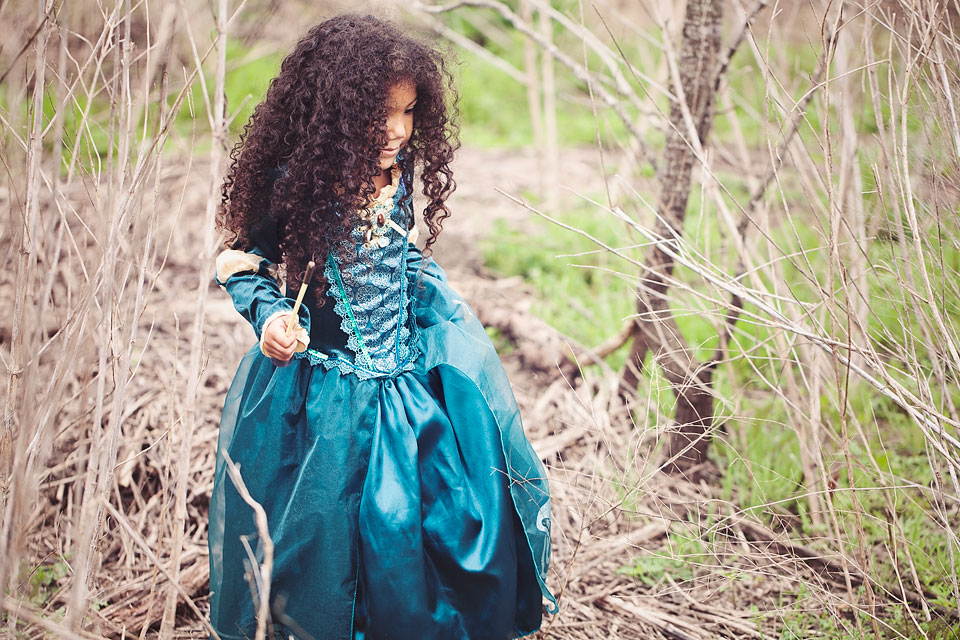 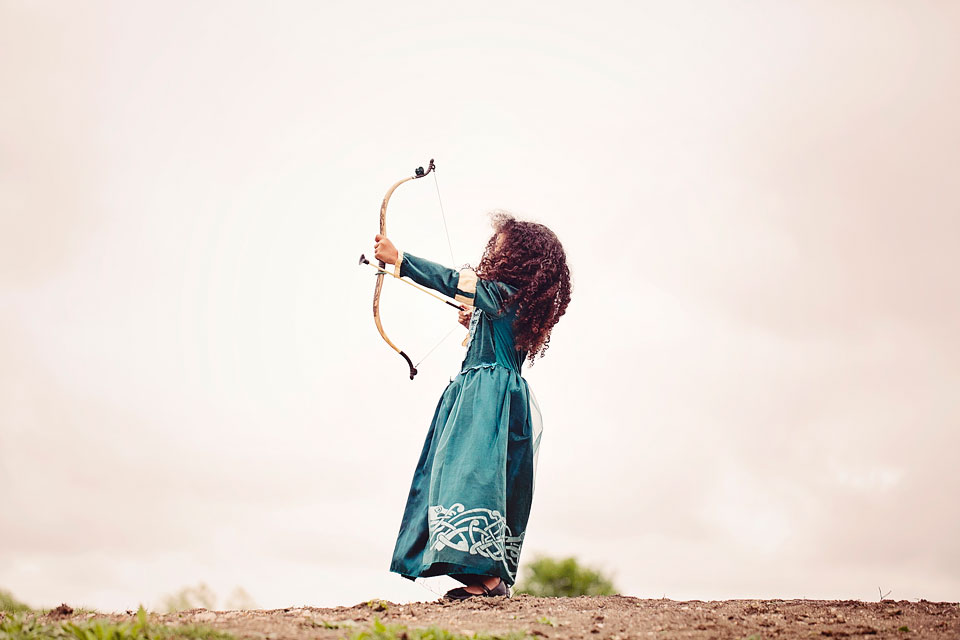 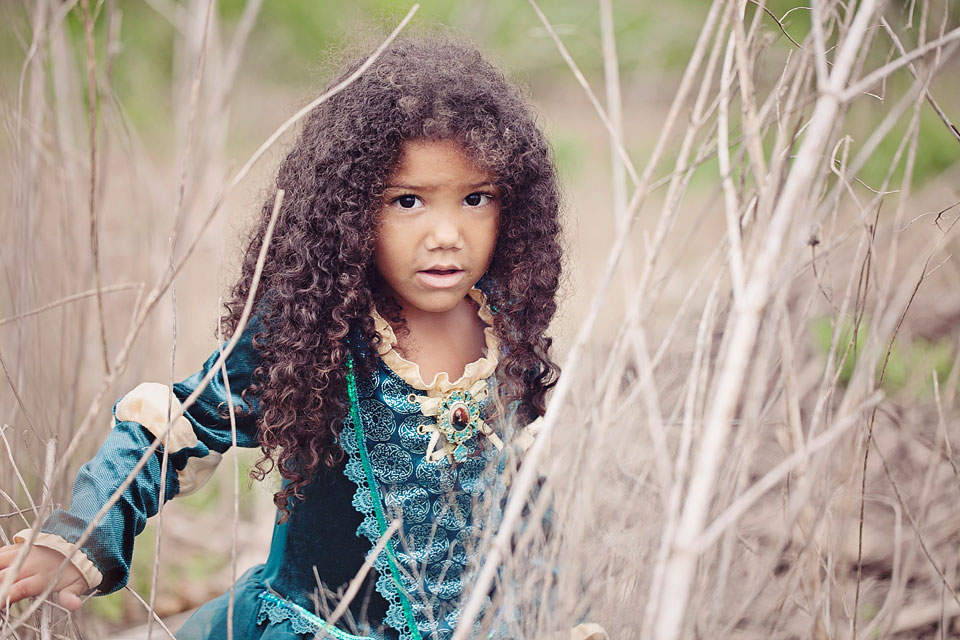 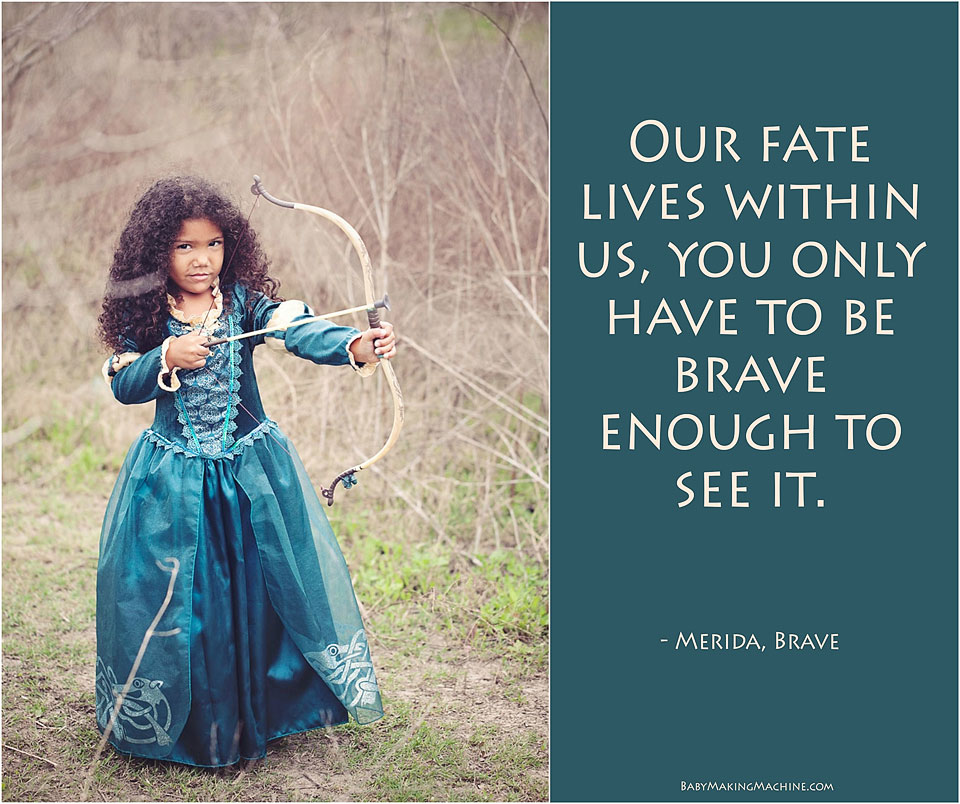 How cute!! You have quite the princess/model/photographer in the making on your hands. Merida, Mulan and Tiana are definitely my favorite Disney princesses because they were take-charge (and bit strong-willed) princesses. They didn’t let anyone or anything get in the way of them creating and charge of their own destinies. Can’t wait to see what princess you guys will do next!

I’m with you mama… LOVE Merida, Mulan and Tiana! Gotta do them justice. haha.

She is so stunningly beautiful!

You are so sweet, thanks so much Alice 🙂

Cute pictures! 🙂 Brave has a good message about taking charge of your fate.

Yes!! I just love that message! And the sweet and strong mother/daughter bond they form.

I loooove this! It makes me wish for a girl..kind of..sort of…
Beautiful pictures!

Photography compliments coming from you mean A LOT! thanks LaShawn! 🙂 And go have that girl mama!! 😉

She is SO pretty, but much more than that, her personality just shines! I love seeing how imaginative and free-spirited she is! She’s growing into a pretty spectacular human being, with your wonderful guidance! (Okay, I’ll put away my exclamation points, now, but the sentiment remains…lol).

This is all types of awesome! I want to do this with my son but more of a “When I grow up” theme. I like that she is all into it too- makes taking the pics that much easier!