You know a sign that you’ve got a great guy? When he invites his kids into his man cave.

On the mornings, when my son wakes up, and my husband is off of work, they have their own little routine.

“He tells me he wants juice, and ‘BALL,’” my husband explained. “Which means he wants me to turn on basketball.”

They sit together and watch ESPN while my daughter and I sleep in a little bit. Then, when Big T finishes his bottle he turns to my husband and says:

“Guh-RAJ,” urging daddy to take him to the garage. 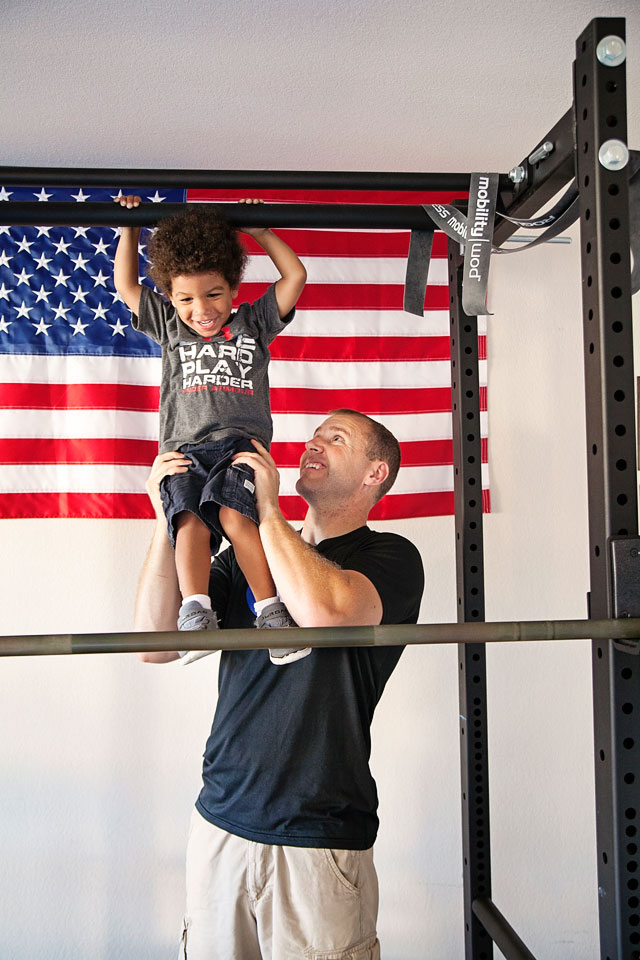 I have my own special thing with each of our kids. My son loves when I push him in the swing, or build him elaborate (in my mind) train tracks. Lil’ J loves when I do her hair while we munch on snacks and enjoy a Disney movie. But special time with daddy means time in the garage.

I have no idea what they do in there most of the time, but it’s their thing.

It’s funny because when we built our house, he envisioned the garage being his man cave. A place he’d go to workout, and maybe even get away. Watch a game, and hang out. Now it’s evolved into a training facility for his two little recruits. 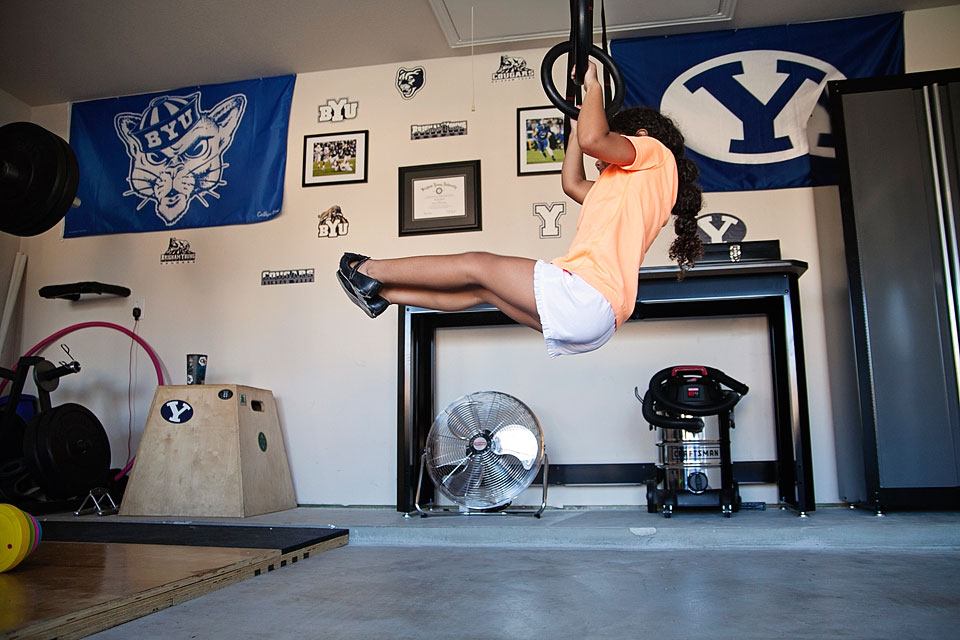 My daughter looks forward to when daddy gets home from work so they can go in the garage, turn on Disney radio and have a “dance party.”

My husband claims he doesn’t do much dancing but I’ve walked in on him busting some moves. He once was a complete disgrace at our “name that tunes” game, but now can hold his own. And our son gets in on it too. When someone shouts the name of the song to say “OOOOOOHHHHHHHH!” As in “in your FACE!” (I know… it’s terrible).

So this special place and time with daddy is something I just can’t touch.

In preparation for Father’s Day I teamed up with Sears to make this space a little more memorable for them.

It’s funny because most people think of a dad who loves to work in the garage they probably imagine handy dads who love to build stuff with their bare hands. Fancy tools are probably on the dream list for many husbands, but it’s just not my guy’s strong-suit. And I’m totally ok with that. 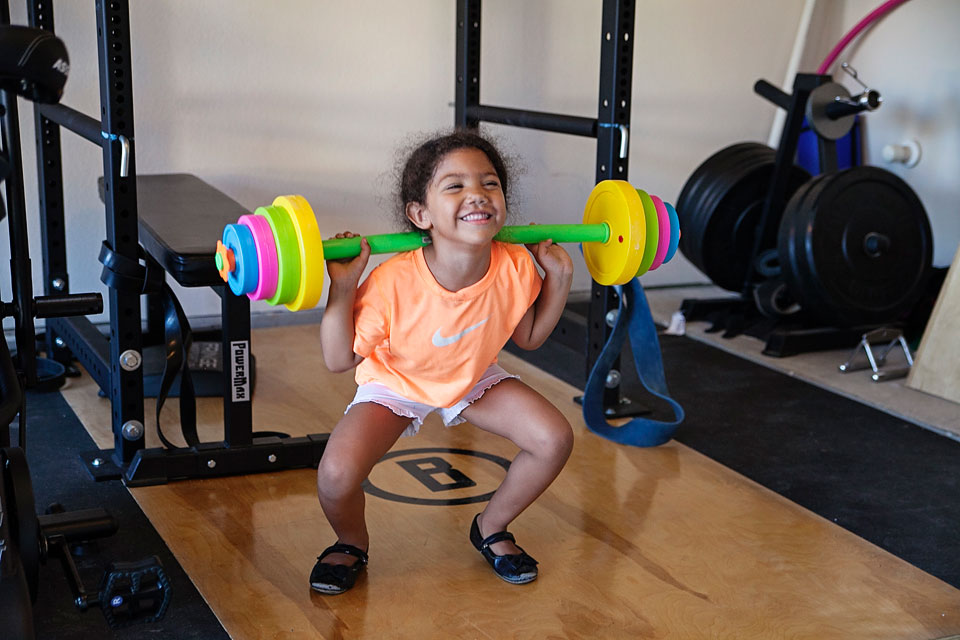 There are some exceptions. My husband built a platform for his garage gym. He got the wood, sawed some rubber horse stall mats down to size, and drilled it all together to make an awesome platform that otherwise would have cost us thousands. Oh but notice the little “B” detail in the center? That was my idea.

He also assembled all of his fancy workout equipment.

So anything to enhance the gym he already had, while giving him some ways to organize his thing what what I looked for . We had strollers, workout accessories, and balls all over the place. He wanted a space to put some of his loose equipment.

I’m not that great of a designer but I’m going to show you how it went down anyway. Focus on the back right corner because that’s where most of the change occurred. 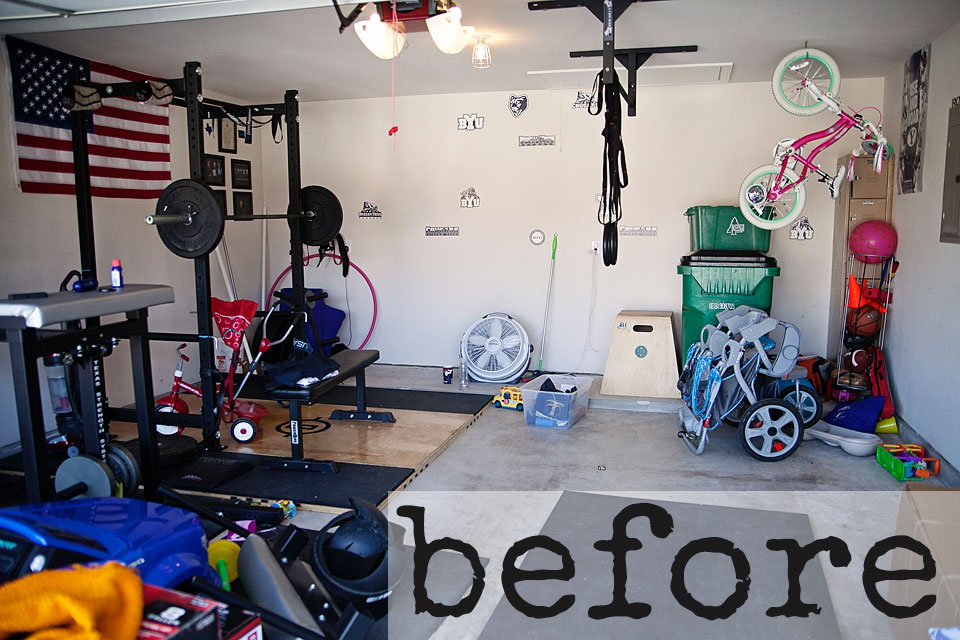 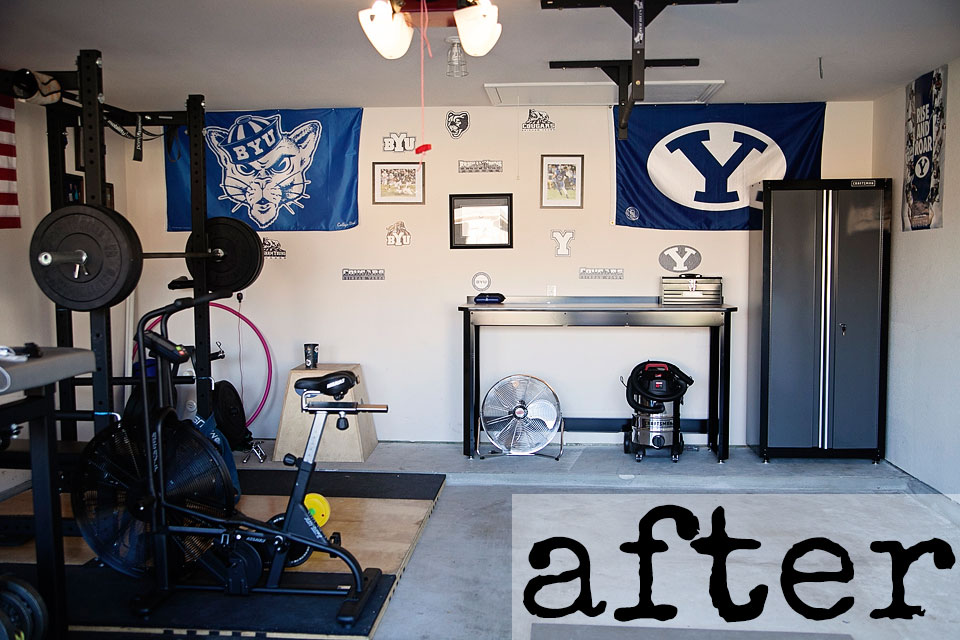 I ordered him a Craftsman storage cabinet, and a workbench that he could use to build things, but will most likely be used for holding his portable speaker, and maybe eventually a TV. I placed the order online and most of the items came with free shipping started to arrive the next day. 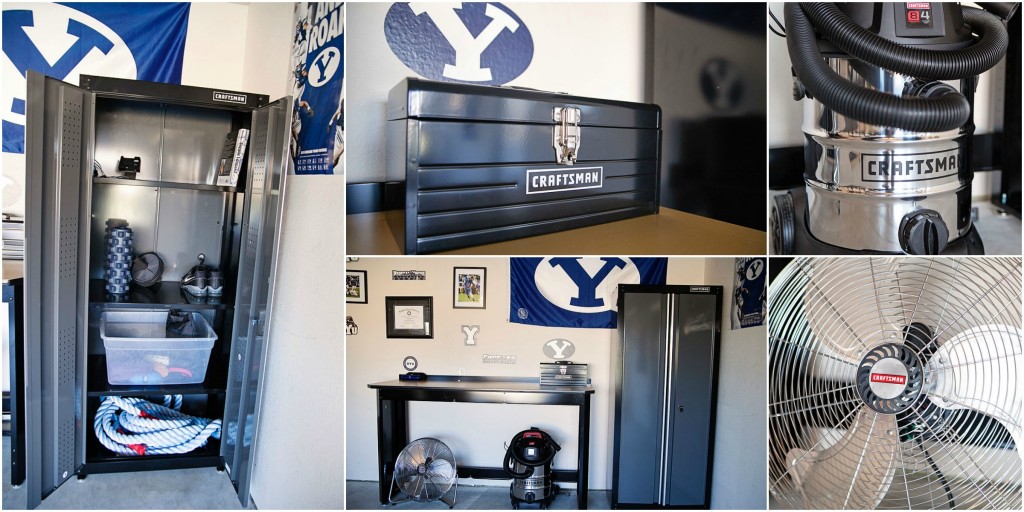 I also got him a toolbox and a stronger fan because the one we had before was pretty puny. And a Craftsman wet/dry vac because oddly enough, it’s the one room in the house my husband likes to vacuum.

We hung some pictures from his favorite sports moments, and some flags to give it a sporty edge.

He was so giddy getting his upgrades and rearranging everything in the garage. It’s his early father’s day gift, and although he’s already totally spoiled, we may get him a Fitbit watch as a cherry on top for Sunday. It’s hard to say no when I see how he involves our kids in his routine, and how much they bond together. 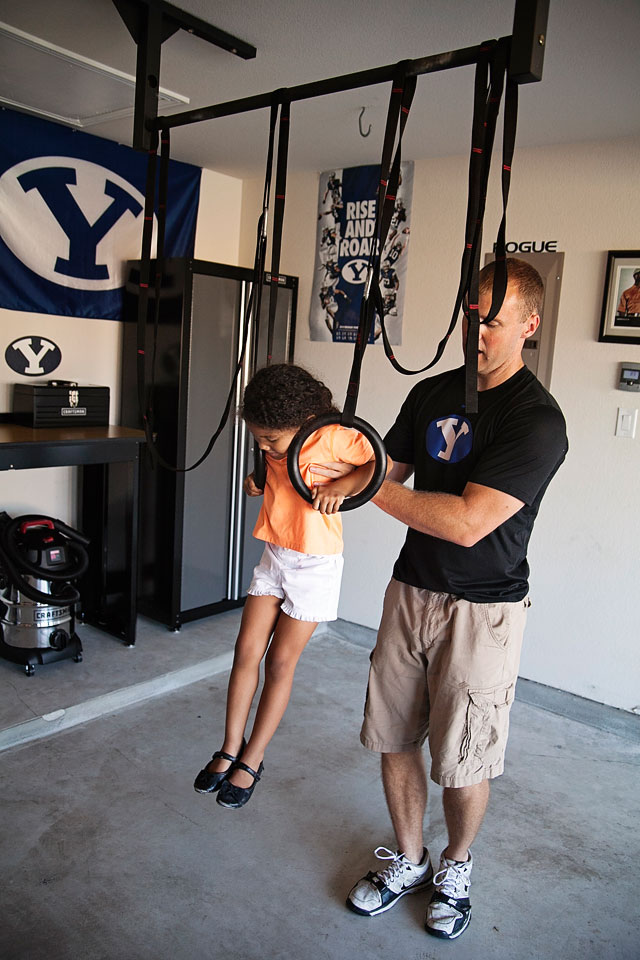 It may be a man+kid cave, but he seems ok with that. And the more they’re in his part of the house, the more I get done on the other end. Win win.

And here’s where I get mushy: This guy is the man of my dreams. The longer we’re married the more I love him and am so grateful for the perspective, dedication, and his love for me and our children. Wishing a happy early father’s day to this special guy. 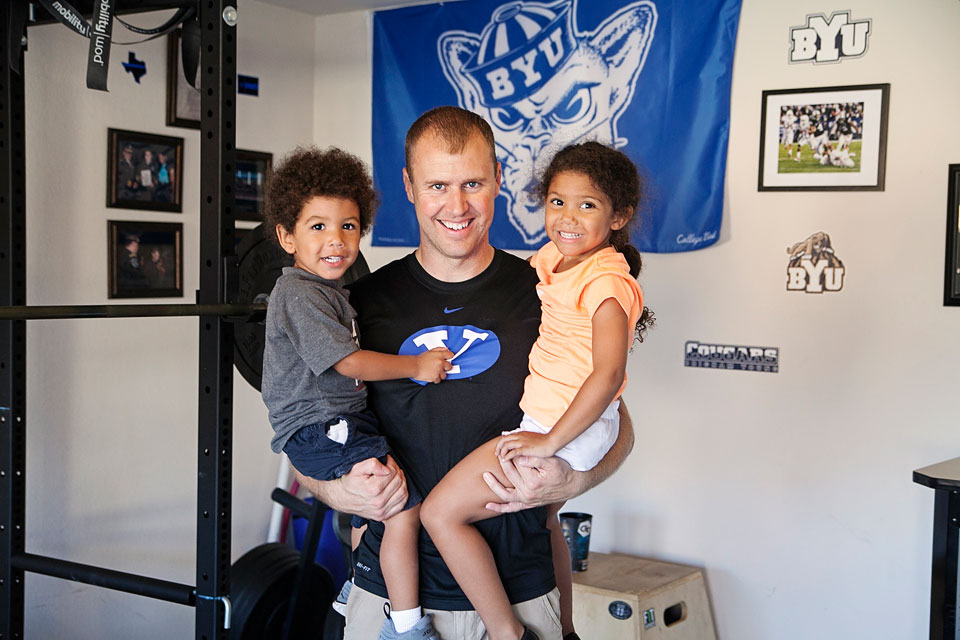 Moments like these make me hope I can get just one more baby out of him! … Wait, what?

Does the man in your live have a man cave? What are you planning for Father’s Day?

*This story was sponsored by Sears, however all opinions are my own. Whether you’re looking to makeover your dad’s look or where he spends his time, Sears has the largest assortment of gifts for Dad under one roof, so you will find just the right gifts for all the dads in your life at all different price points to fit your budget. Visit: sears.com/DestinationDad to find something for the man in your life.

You can also become a Shop Your Way member (for free) and enter their beard photo contest to win a “MAKEcation” here: shopyourway.com/Beard

This is SO awesome. Sharing now.

Btw, we have that same jogging stroller. Except yours probably sees jogging every once in a while.

Haha James, it’s been a minute for me… I used to push them in it ALL the time. We need to start going again, in the mornings when it’s cool. Thanks for sharing!

Ooh, so excited to check out that link! I need some Father’s Day ideas this year!! We’re probably going to go camping, and I know he’ll love that… but I need gift ideas.

Also, how are you guys able to keep the garage cool enough to hang out in there for any length of time? Our garage is always SOO hot and stuffy! Need tips because I’d love to make the garage into a space where Hubster can go to do guy stuff. 🙂

Yea! Your hubby likes to cook right? They have lots of fun backyard stuff for guys who like to be doing yard stuff and/or grilling. I know he’s super busy though… But could be fun for weekends and holidays!

Ok so as far as cooling the garage, the fan helps, but we also have a portable AC. We crack the garage a little then stick the funnel tube thing out so it can suck the hot air out and push the cold air in. It’s like magic. lol. They sell those at Sears too.

What a great early Father’s Day gift! I can definitely see our future garage or basement being more of a family space than a man or mom cave.

Yea!! You’ll love it! I made him keep extra space so I can park my car… that was my only request cause it gets so HOT outside!

That is a great transformation/organization of the garage/gym. I own the storage cabinet too and it definitely helps to organize and hide items. Your husband is a good man for converting his man cave into a family cave.

I absolutely LOVE that he includes them in his space. You definitely picked a winner! 🙂

The makeover looks great and I love how your kids are getting involved. My husband’s man cave is his shed where he has his tools, projects he’s working on a poster of Halle Berry. 😉

What a great idea – to make a man/kid cave. I love that it promotes dad & kids spending fun times together!

This made me tear up. What a wonderful connection he is making with the kiddos. Right now we are traveling full time and sharing only 300 sq ft so he does not have a cave — LOL! And the space looks great – well done!
🙂
Traci

My dad didn’t have a man cave, but every time he wanted to watch any game on the ‘big’ TV we let him (lol). My dad wants BBQ, so we will be BBQ-ing.

no man cave here, but DANG your garage is nice!!! Our current garage is so tiny and low-ceilinged and no-air-flow-y and dark and weird and funny smelling… I try to never go in there. haha.

Would LOVE to do something like this…someday, when we own our house, I guess. What an amazing idea.

You’ve got a great guy there! Look how happy he makes them doing that! I’d say he’s a keeper for sure 🙂

Thanks Ronni! I think so too 🙂

That is so cool! That’s definitely a nice set up and I love how he takes time out with the kids. You definitely got a keeper there.

What an idea!!!!!! I would just say – thanks for the great share and thanks to your husband. Keep up the great work!