My Prayer for 2 Sisters 8 Years Apart

“Finding out mom was pregnant was the worst day of my life.”

No exactly the words you want to hear from a girl who’s about to be a big sister. But that’s what one of my sister’s said the day she found out our mom was having another baby.

See, Lauren was the baby for eight years. And to this day she (mostly jokingly) says she hates that she’s not the baby anymore.

When I found out I was pregnant again my mind automatically went to calculating the age differences. My son and Sneaky will be five years apart and Lil’ J will be a whopping eight years older than her little sister. My mind couldn’t help but go to my youngest sisters who don’t have the most loving bond.

Thankfully, I don’t see history repeating itself with my daughters.

Lately, more and more I believe the my daughter is the divine reason for this sneaky one. I’ve never seen her so happy, intrigued, helpful and excited. She was thrilled for a baby whether it was a boy or a girl but the moment she learned she was having a sister, she died and went straight to heaven. 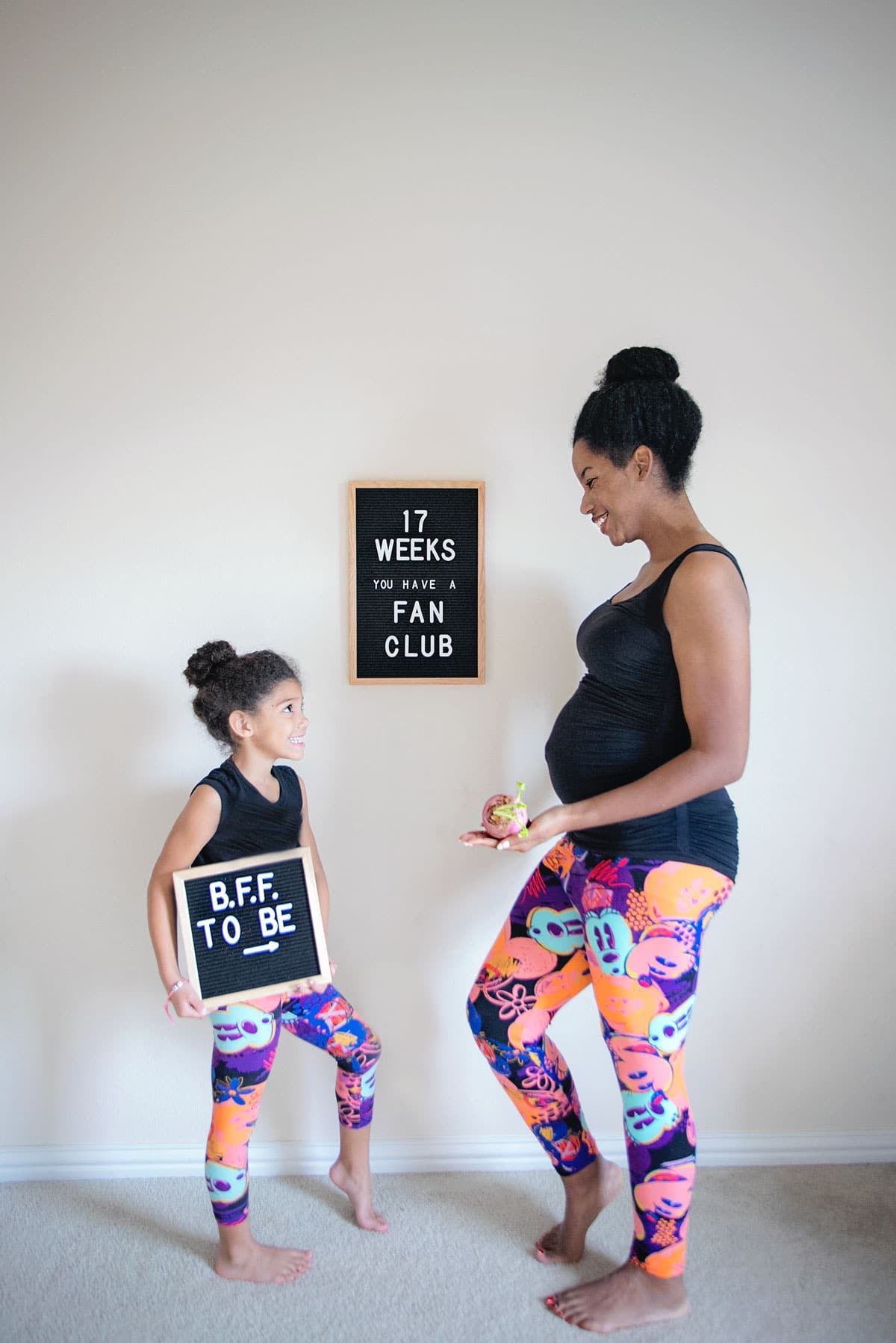 Though eight years apart, I hope these two develop a beautiful bond. They’ll never share clothes, or (outside of homeschool) be at the same school. They’ll likely have different tastes in food, music and movies, but I hope they share other things.

I hope they tell each other secrets, and keep them. I pray my oldest will be a good role model, someone her sister can look up to, and a shoulder for her to cry on.

When they’re much older and have families of their own, I hope they still call and see each other regularly. I know it’s a lot to ask, but I hope they’re best friends.

I’ve heard so many sister horror stories. Heck, I’ve lived them personally. And maybe I’m being a bit optimistic here. But I really truly hope that these two are an exception. With the look on my daughter’s face every morning when she jumps in bed to say hello to her growing baby sister, I can’t help but feel like they’ll be some of the lucky ones. And the day these two meet with be one of the best days of their lives.

I wrote about post recently about encouraging siblings to be friends because my sister and I don’t get along at all. In fact we haven’t seen each other in almost 8 years… I was worried about how my kids would be as siblings since they are 6 years a part, but luckily they are incredible. I know your kids will be the same.

Oh wow!I’m so sorry you and your sister haven’t spoken in so long. I’m SO glad your kids get along. I wonder if it’s how we’re raised, or a personality thing? Or maybe both. I really hope ours stay close. Thanks for your sweet comment mama.

I’m kind of a random reader, and don’t usually comment on things, but I am older than my sister by 8 years(and a few months) and we love each other. She really is my best friend. We have 2 brothers in between us and I used to lament being outnumbered forever(dramatic much?) We’ve had to adjust our relationship over the years as she’s grown up and it was hard for me being away at college while she was going through middle and high school. I had to get to know her again as an adult. We talk now nearly every day and are planning a trip together before I have my next baby. Your daughter sounds a lot like I was at eight so I think your girls will have a great bond.

I love that picture!

Also, my little sister is 11 years younger than me and we have a great relationship. When we were both younger, we had an amazing bond, now we’re sadly not quite as close, but it’s still a wonderful relationship (and we actually share clothes! :)). As an expectant mama and older sister to a younger brother, my strange worry is the older sister/younger brother dynamic, which was problematic for me and my brother (though when we hit our 20s, it improved markedly, and now he’s one of my best friends). Just thought I’d share the sister story, though – patterns don’t have to be repeated.

My sister and I have the bond you described so it is possible. Judging by little J’s excitement your worries won’t be an issue.

haha
BFF soon to be
does she understand that.
I like the picture

Happens. In my case, my sister is closer to me, more than my parents.
http://www.parentarena.com

My sister and I have the bond you described so it is possible. Judging by little J’s excitement your worries won’t be an issue.

My sister is 8 years older than me and she’s one of my best friends 🙂 We didn’t do a lot together when I was a kid, but during my teenage/early adult years (which is now – I’m currently 23), we became great friends. And we actually do share each other’s clothes 🙂

This is a great article. I like this theme. This site has a lot of advantages. I found many interesting things from this site. It helped me in many ways. Thanks for posting this again.

Thank you Jennifer for sharing this post and beautiful image of you, your daughter and daughter-to-be. LOVE the matching outfits too. Its such exciting time for all of you. 😛

What are you looking forward to most when your baby girl is born?