It Was Never About Winning: My Case for the Participation Medal

In parenting it can be terrifying to see our children trying something new, or being pushed to their limits. This month we partnered with Clif Kid to take on something that once seemed impossible. I watched my daughter face numerous fears and compete in a challenge I honestly didn’t know if she’d try, much less finish. My blog post today is sponsored by Clif Kid, the makers of the delicious CLIF Kid Zbar Filled snack. However, the story I’m about to share and all opinions are my own. 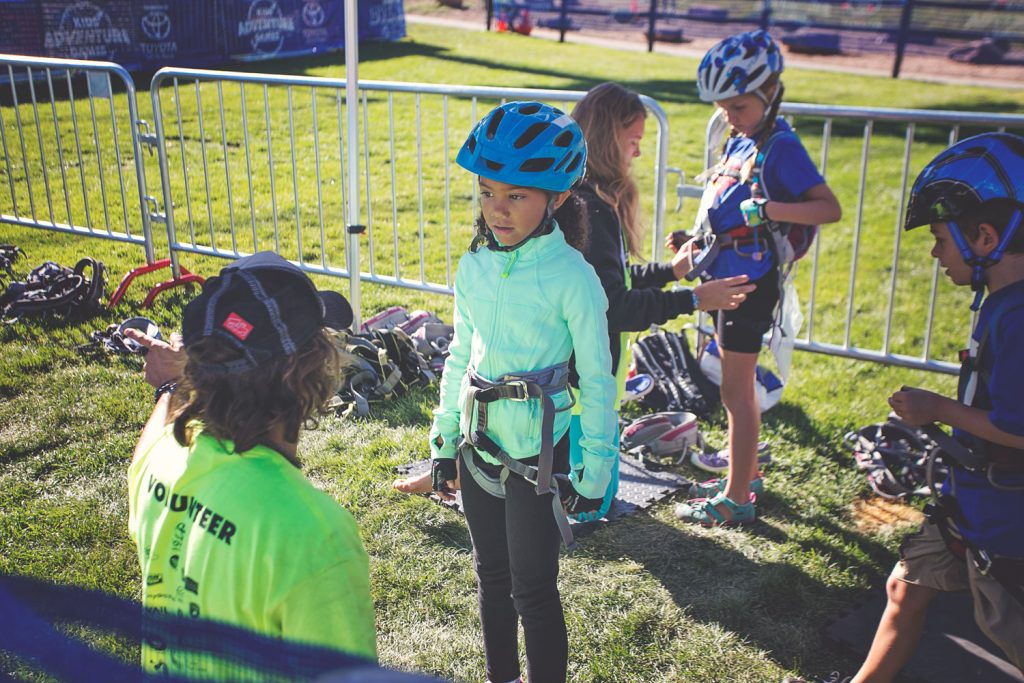 We woke up early partly because of nerves and partly because I didn’t want to oversleep. My youngest sister recently turned 12 and my daughter just turned 7, today they’d be competing in the Kids Adventure games in Vail, Colorado.

Up until then they’d been preparing themselves mentally by watching the preview videos of kids mountain biking over hills and ziplining across creeks. They prepared themselves physically with little exercises, and runs. Between my husband’s bootcamp-style workouts, completing a mud race, and cheer practice I wasn’t as worried about Lil’ J’s physical readiness as much as her mental readiness. She doesn’t like heights, tunnels, fast things, or really anything new. She likes to dip her toe in versus diving head first. It’s just her style. So I knew today could be a challenge, on many fronts. Lil’ J said this race would help her face her fears. Something she’s been trying to do more with stunting on her cheerleading squad.

For breakfast I offered leftovers, breakfast tacos, and lots and lots of water. My daughter munched on an apple almond butter flavored  Clif Kid Z-bar filled snack and fired off a round of questions about what was in store for the day. I reminded her she’d seen the videos and that she could do this. My little sister, a tween and motivated by few things other than food and sat mostly quietly. If she was nervous she didn’t show it. I asked her to please keep an eye on her niece. 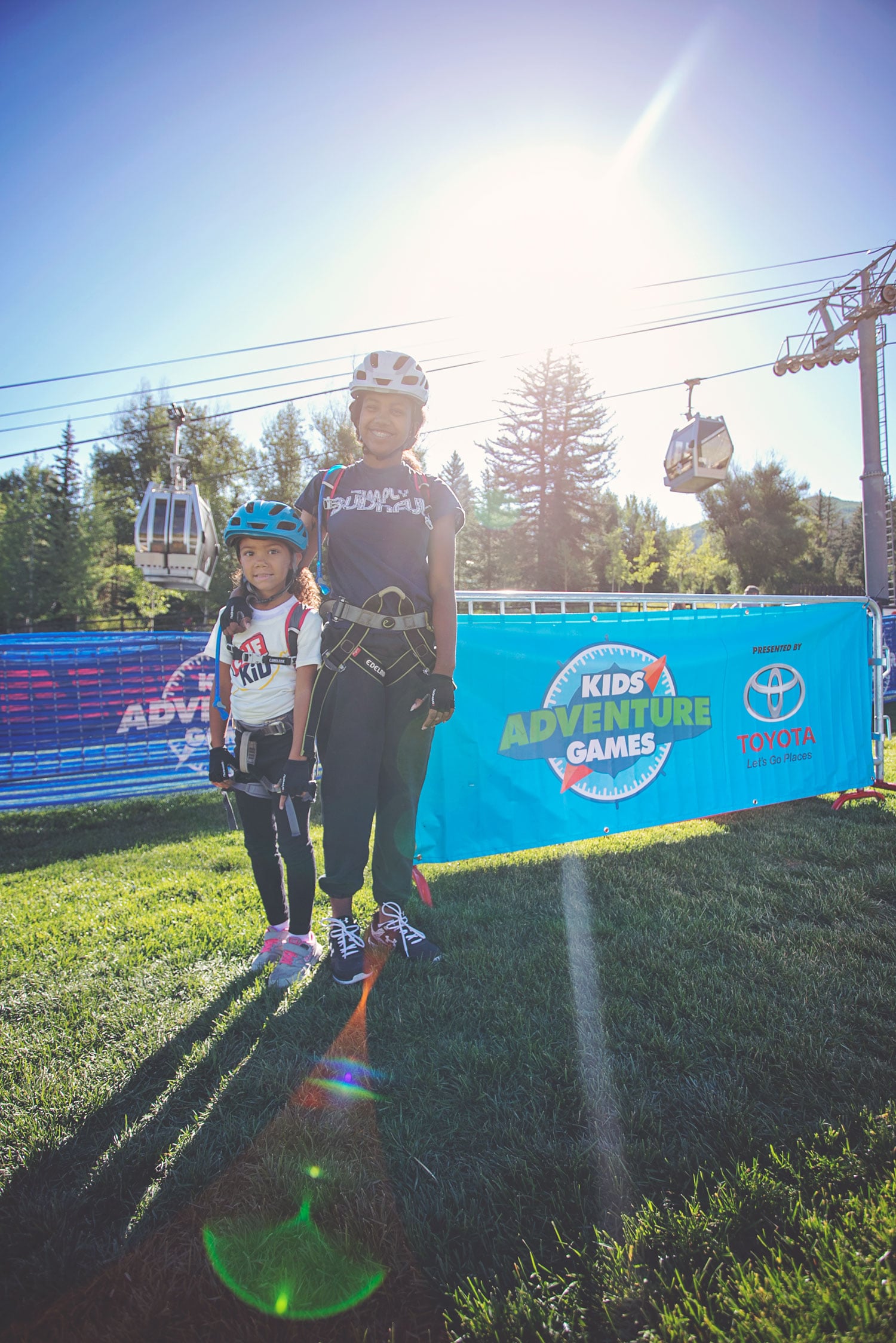 Of course this was a team race, so every obstacle would be done together. Aunt Kimmie is my daughter’s biggest fan, and this was their chance to do an adventure together. We knew going into this that it wasn’t to try to win, or get the best time. It was never about winning, but to work as a team and finish together.

After we arrived on the race grounds, got their bikes situated and harnessed up, the girls went into a “kids only” meeting where the adults had to wait outside while the racers got their maps and details about the race. I scoped out a map with Kristen, a Colorado native and as far as I was concerned, a pro at all things adventurous and outdoorsy. We made plans for where I’d stand and take photos throughout the race. I told her I had no idea what to expect, but that the girls would likely surprise me.

As soon as they emerged from the meeting my heart sank. My daughter was in tears (already) and saying she didn’t want to do it.

“They said there’s a dark tunnel!” She nearly sobbed. “And that we’d be completely under water!”

Kristen explained she’d be able to see out the other side. I encouraged her, told her she could do this, and after we’d celebrate. I also mentioned that I’d be nearby taking photos along the way and that adults would be at every obstacle to help her if it was needed.

Surprisingly (seriously, when this girl decides she doesn’t want to do something it’s really hard to change her mind) this calmed her down a lot. She agreed and asked to go wait at the starting line.

I’ll spare you the step-by-step rundown of each obstacle but I will say this… They blew me a way. Particularly at three moments. 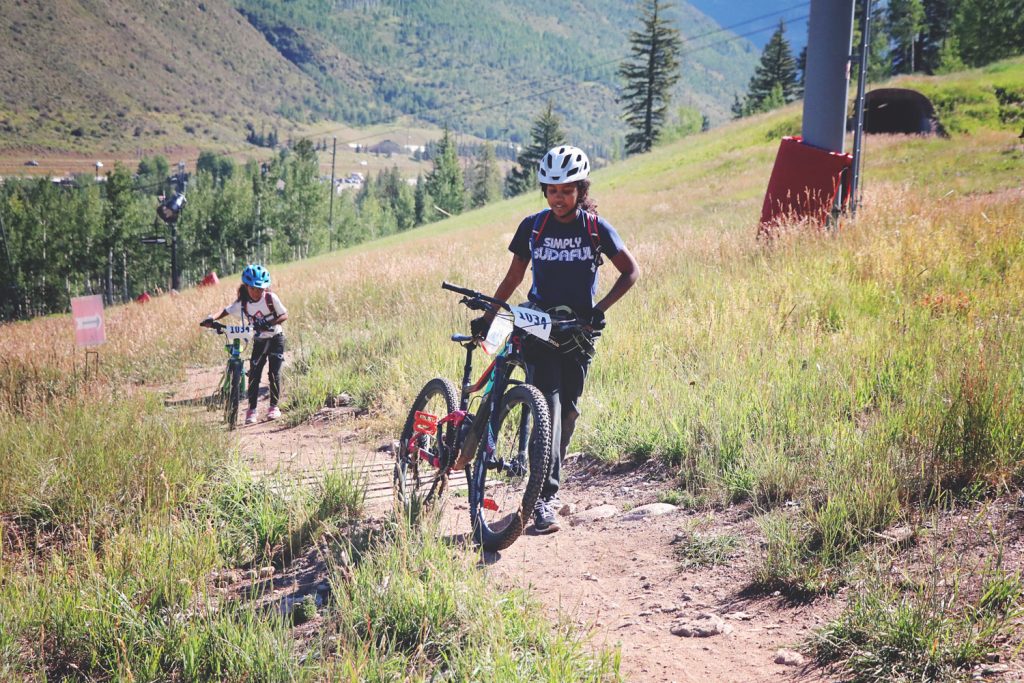 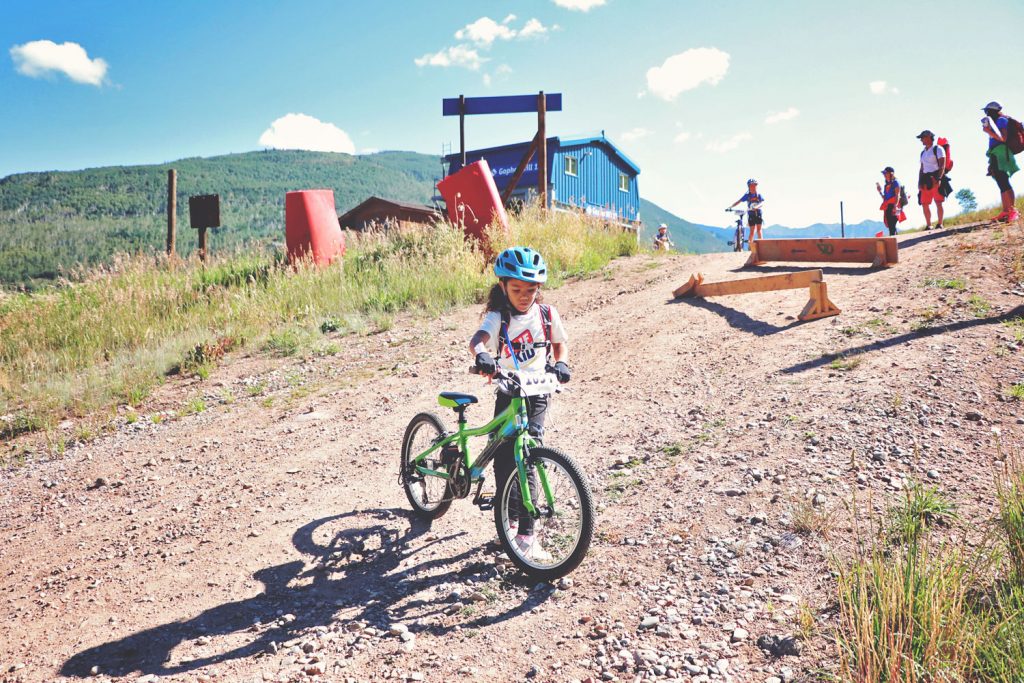 I first spotted them rounding the top of a huge hill, pushing their mountain bikes. It wasn’t an easy trek. I told them they were doing great. I interpreted the look on my daughter’s face as exhaustion and I encouraged her, saying this was the most difficult obstacle.

“This isn’t even hard!” she shouted back.

Ok then. Things were already going better than planned. 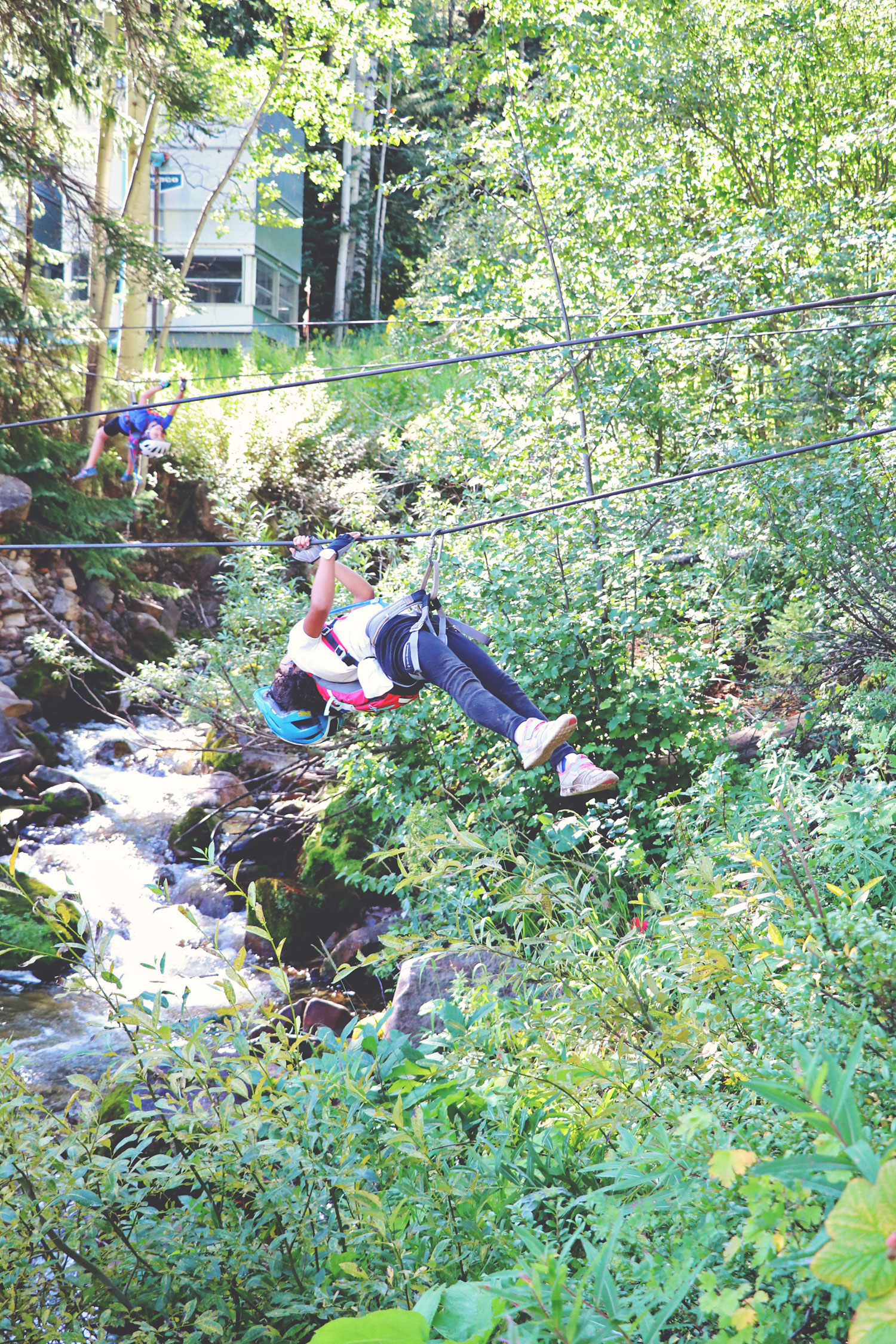 Ahead I watched kids cross a creek hanging upside down, pulling themselves across a rope. I waited thinking there was no way my daughter would do that. But she watched as kids her size, then her aunt made their way across. She stood talking to the man in charge of connecting the kids to the rope. I could see her shaking her head, then taking a few deep breaths, nodding, and eventually climbing up herself. I couldn’t believe it, and I was so proud. 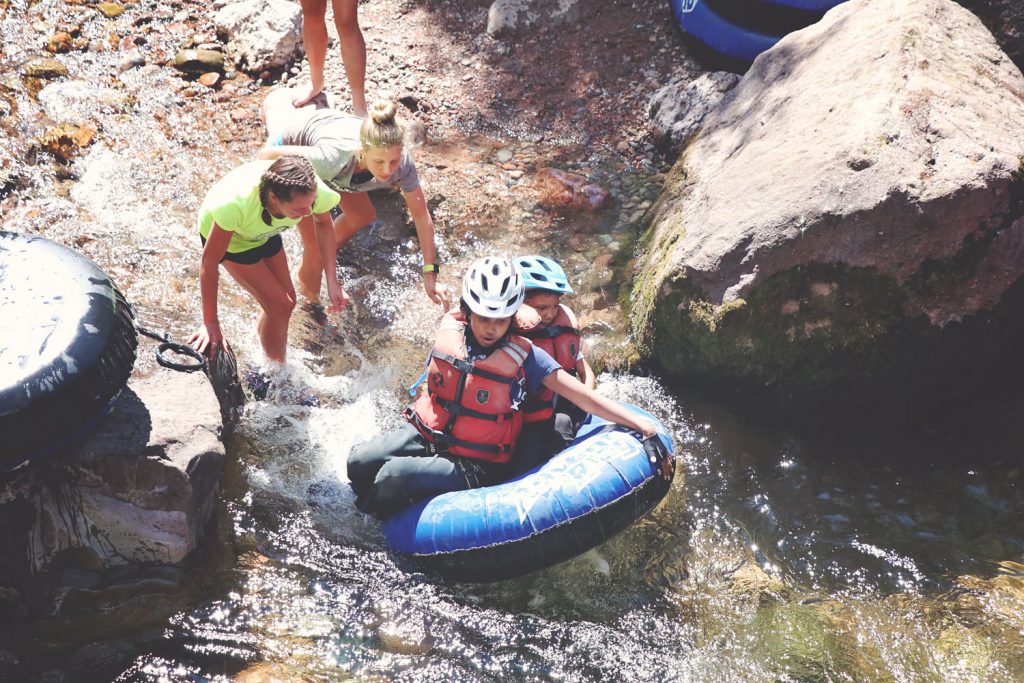 This was the hardest part according to my daughter. She and her aunt had to fit on a raft together and paddle down a few hundred yards to where they’d get out. Problem was my sister is about twice the size of my daughter and she took up most of the raft. Doing this they flipped over after a little dip and both took a swim in the freezing water. Lil’ J screamed for me, and for help (she had a life jacket on and was fine). Kimberly hung on to her and helped her teammate through to the end, which made me so proud and thankful.

But the my favorite part of the whole experience was likely what happened after that, when Lil’ J, came shivering from the river. She told me how scary that was and I explained rock climbing was next, and asked if she would be able to do that and the last few obstacles.

I all but expected her to be like “nope, I’m done.” And really, I couldn’t blame her. But she looked at me with her eyes that had just been crying, after likely the most terrifying experience of her life and said “Yea, I think so.” 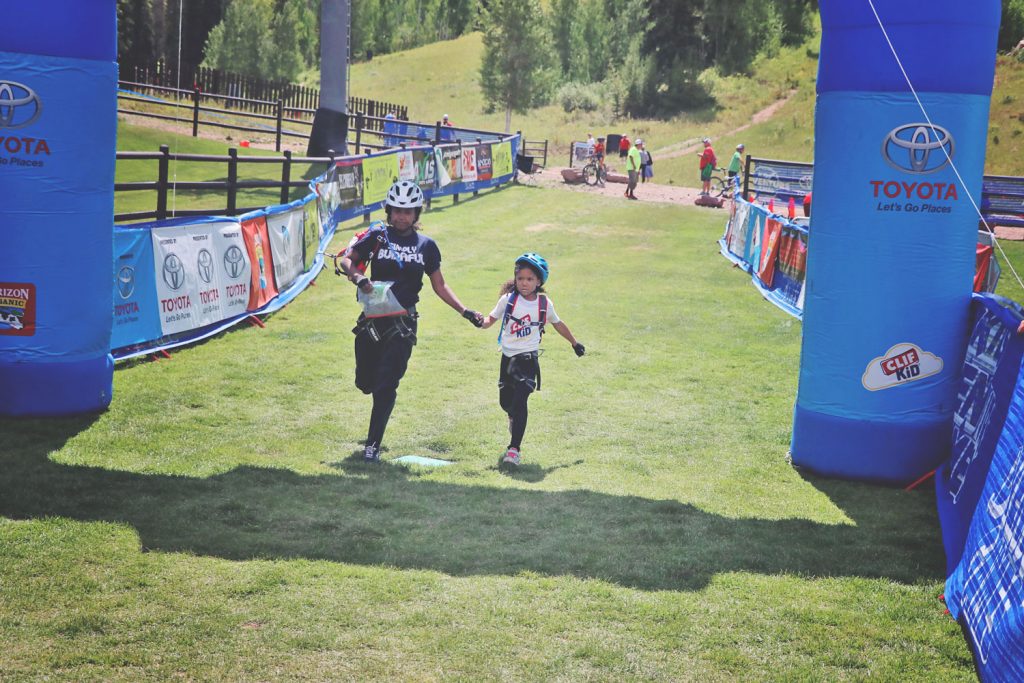 The girls both (sort of) attempted the climbing wall, crossed a mud pit, and the final challenges with great relief.

The announcer handed the girls their fancy medals at the finish line, and my daughter wore it proudly for days, and still shows it off to friends who come over.

“This is my favorite because it was the hardest to earn,” she told me as she hung it up to the rest.

It was a challenge, and she cried a few times, but she never gave up. She may not have won, but she earned her prize.

Months ago when I knew I’d be taking my daughter to the Kids Adventure Games I had no idea how it would go. If you had told me a year ago that she’d be completing something like that I probably would have laughed. But she’s taught me to never underestimate her and that she is truly capable of anything she puts her mind to. Funny, because I tell her that all the time, but now we’ve witnessed that it’s truly possible. 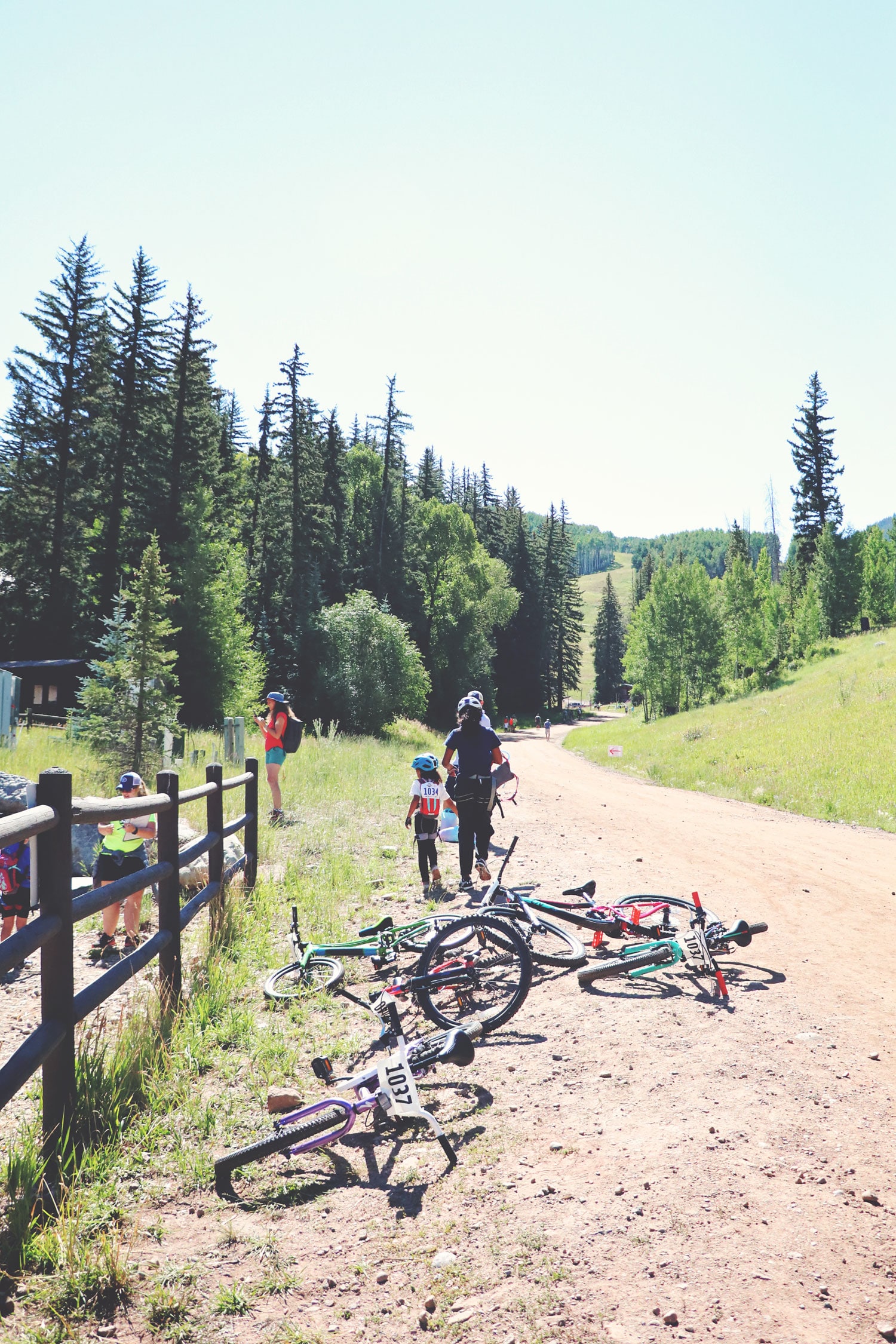 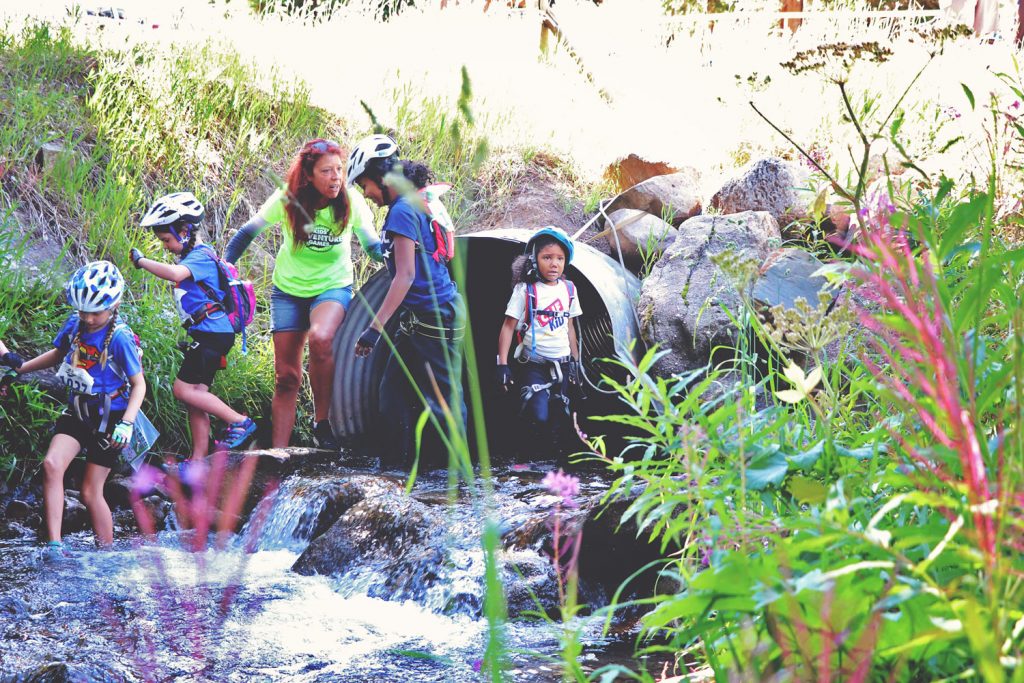 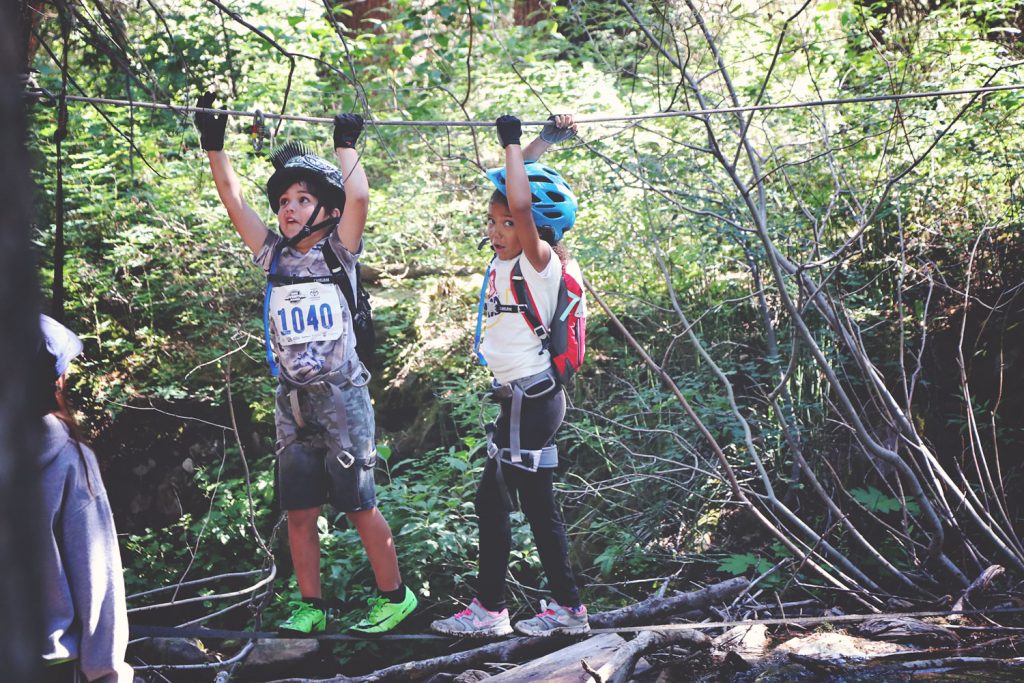 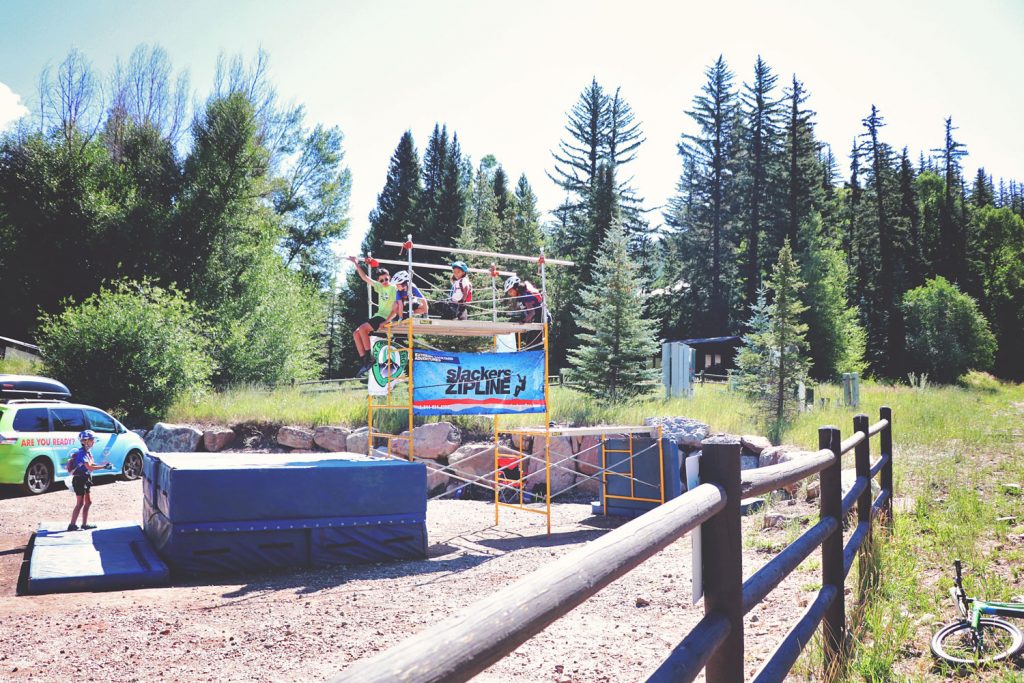 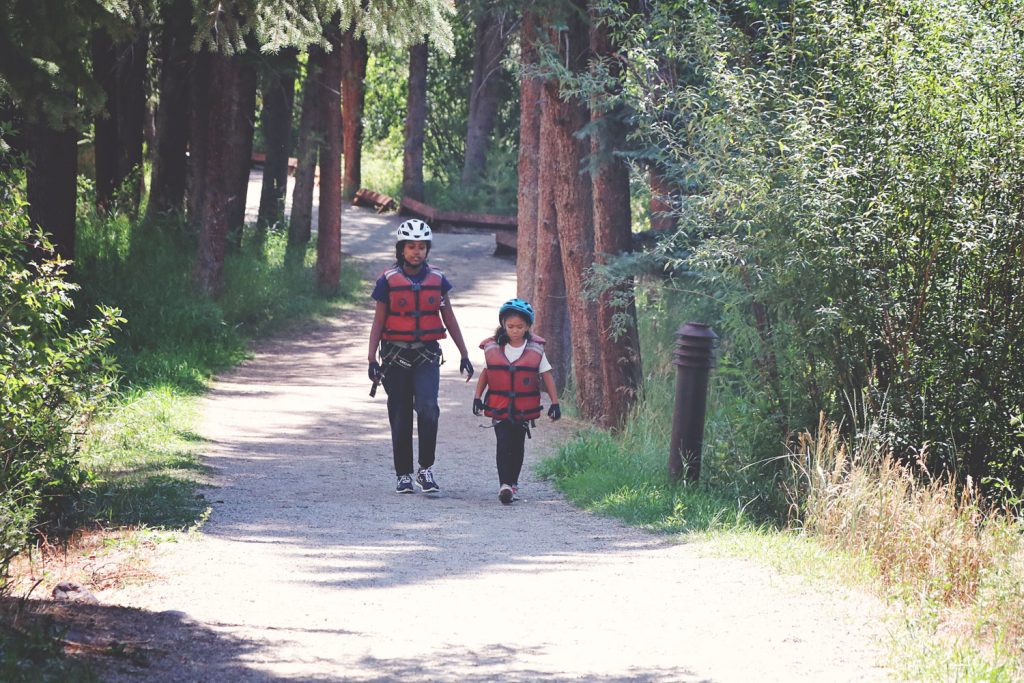 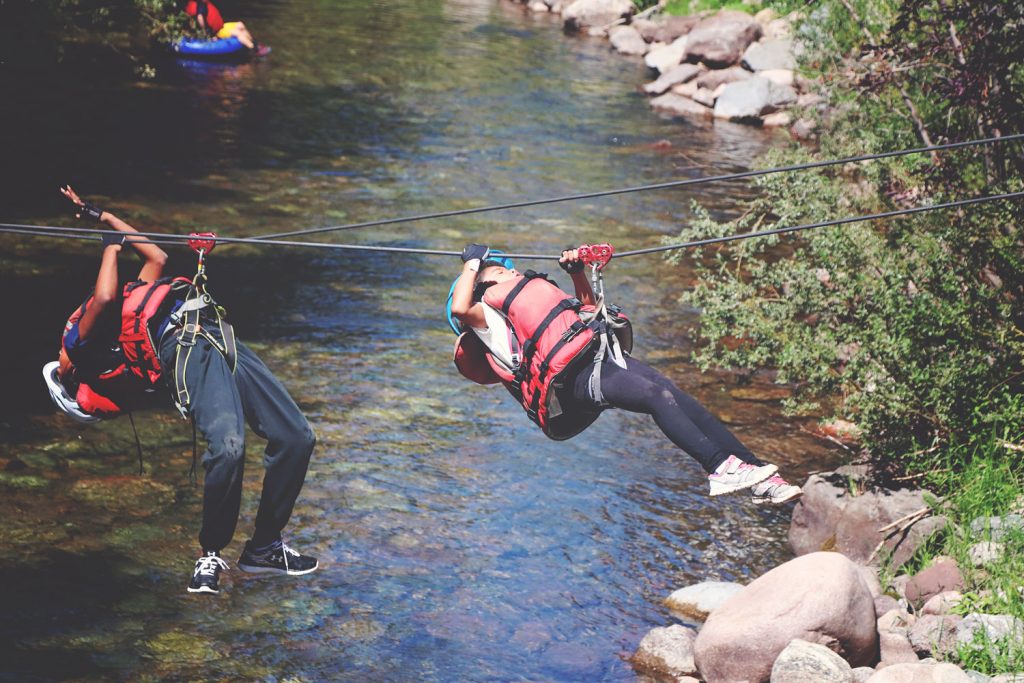 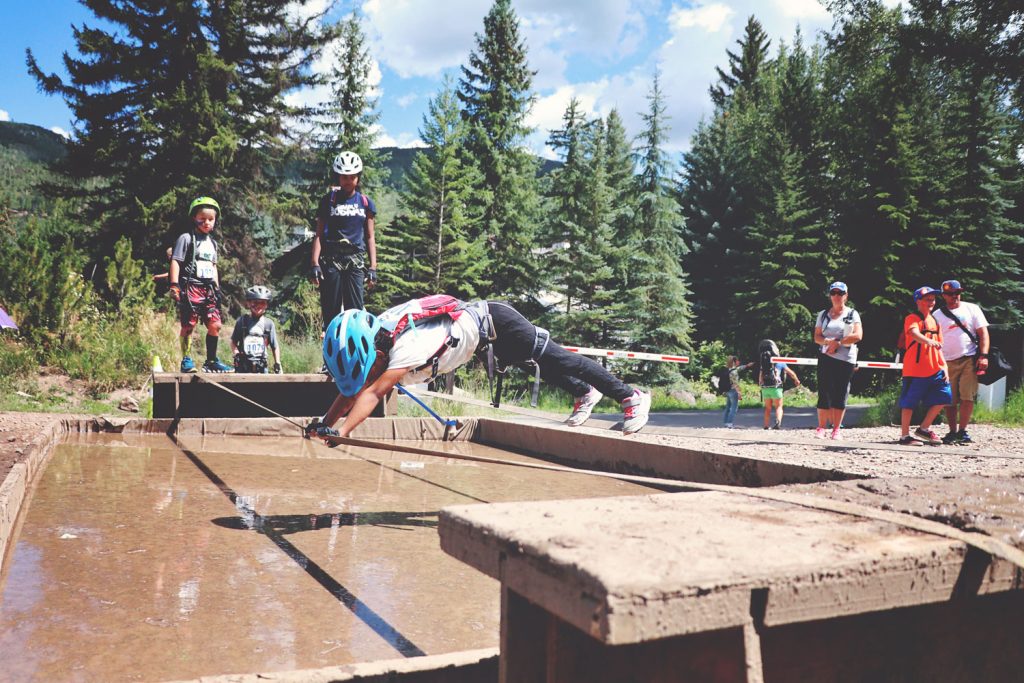 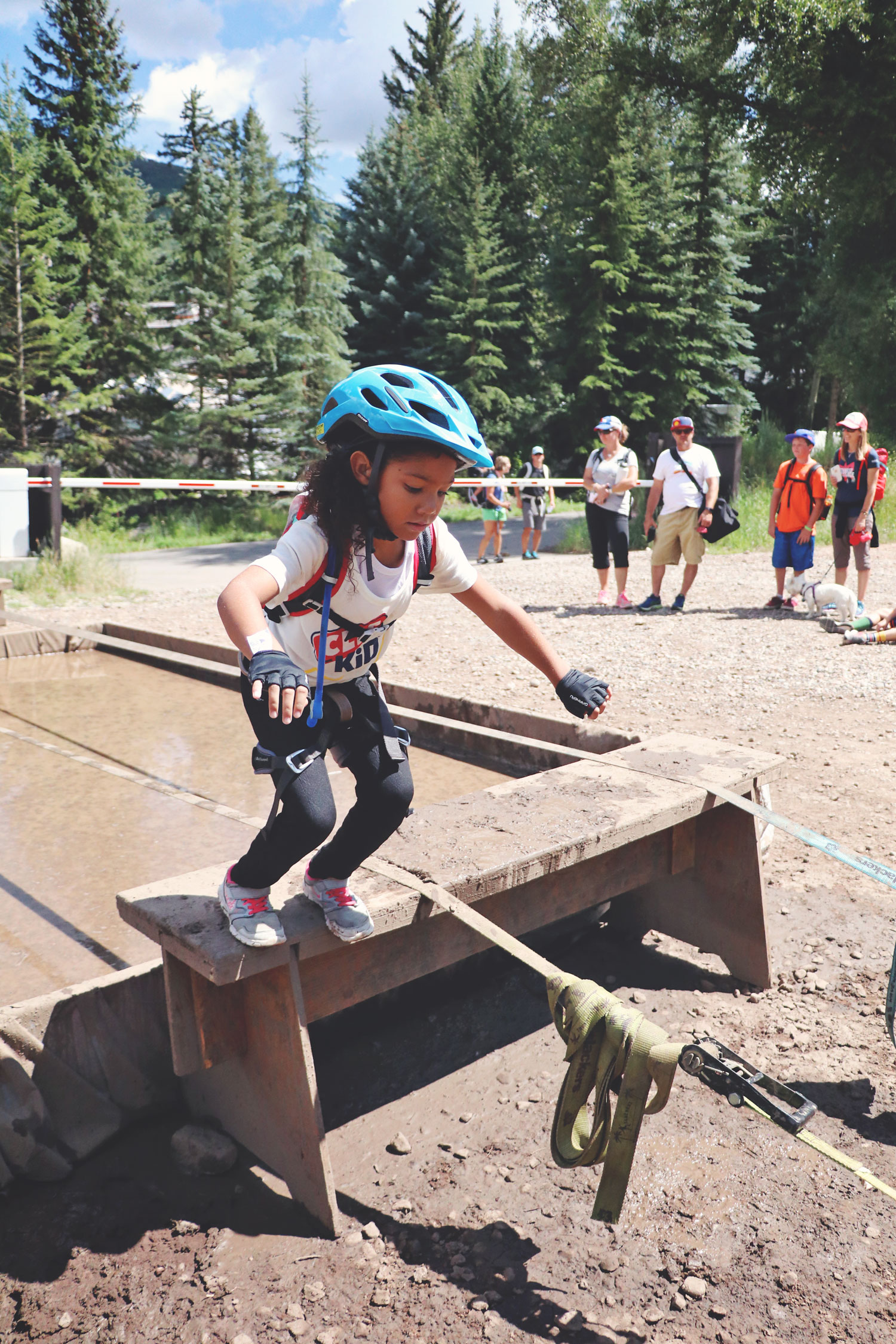 I’m passionate about getting my kids outdoors to play, and making meaningful memories together. That’s why I’ve partnered with CLIF Kid for 2017, to share our adventures getting out and playing together as a family. CLIF Kid Zbar® Filled is crafted with creamy, delicious nut butter filling and a blend of nutrients for energy to help keep your kids zipping and zooming along. Their products are free of high fructose corn syrup and artificial flavors.  You can learn more about this product here.