No, You Don’t Know Everything About Cops or Black Lives Matter

I overhear my kids bickering in the playroom. They were getting along nice for a while but an argument erupted. I’m not sure who started it or what it’s about but I can hear them yelling back and forth.

“WHAT DO YOU WANT?” My daughter screams. Her brother cries while yelling back but she gets frustrated and throws a few toys in his direction and stomps into my room to tell me her version of the story.

I call both of them in, but first ask my daughter what her brother wanted.

She lets out an exasperated sigh and starts rattling off her frustrations.

“But what did your brother want? Were you listening?”

After a minute or two, I decipher the disagreement, they both apologize and go back to playing and I’m left with a realization that applies to us all.

We skim, we tune in for portions and we jump to conclusions. And when we do actually listen to someone else’s argument we are doing it to formulate a rebuttal of our own to further our point.

This has been a sad month. There’s so much pain, so much hatred and fear. An incredible amount of misunderstanding.

It’s time to stop and listen.

When was the last time you read an opposing viewpoint to yours and tried to understand where they were coming from?

How about this week we say less and listen more. Really listen. And try to see, really see someone, and their point of view.

Surely you don’t know everything there is to know about police work or Black Lives Matter. Most people don’t know nearly enough. We stay in our circles and listen to people who agree with our own beliefs, then boast ourselves up in our rightness.

If you hate police and everything the institution stands for, go on a ride out, or talk to a police officer and ask them their opinions on the issues that concern you. Ask them about their fears, or what it’s like doing what they do and what they believe their biggest misconception is. Don’t rebuttal. Don’t reply. Just listen.

If you don’t understand what Black Lives Matter stands for, or worse–think it’s a hate-based organization, visit their website to find out more about what it really stands for, find a chapter near you and visit a meeting, or ask a supporter why they use that phrase. Then listen. Really listen to what they have to say.

Talk to someone who has a different faith than you, and ask them why they believe what they believe. This isn’t an argument or a chance for you to convert them to your faith. Just listen.

Know a Trump supporter? A Hilary defender? … You get the idea. 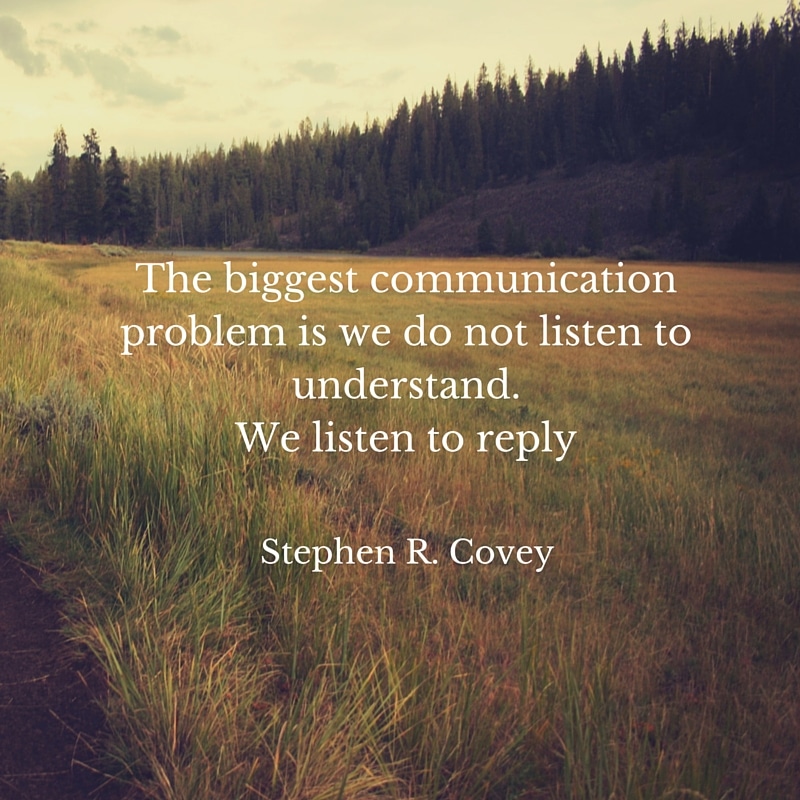 We’re so caught up in our beliefs and wanting to be right that we never stop to hear–really hear what someone else has to say.

If you don’t know where to start, I’ll give you a few starting points:

My blog post last week explaining my gratitude for police support but a plea for the acknowledgement that black lives matter too.

An extremely detailed look at one man’s experience being black in suburban America. And his dealings with police.

Corporal Montrell Jackson’s Facebook plea to end the hate (a week before he was killed).

Sentiments from the Dallas police Chief about police being asked to do too much.

Read something else others should listen to? Please share it in the comments.

OMG! Wow, so funny you wrote about listening I wrote about my poor listening skills myself yesterday http://livingmommywood.blogspot.com/2016/07/becoming-better-listener.html

I agree we don’t take the time to listen properly. I am working on it for sure one day at a time but I’m invested in making my life experiences better and listening is certainly a great skill we all need to get better at. Stay blessed 🙂

I’m working on it too! I need to re-work through all those 7 habits that brilliant Mr. Covey taught us. Also, thank you for sharing your great post! Crazy our topics crossed. It’s so brave to put out there that it’s something you want to work on. I want to as well! Thanks for your comment.

Let me preface this by saying that I am white and grew up in super-white suburbia. I barely had any opportunity to be exposed to people of any other color for the first 17 years of my life, outside of media which is obviously not a reliable source. Part of the problem, I think, is that just like with Muslims/terrorists, a few extreme followers are ruining it for everyone else. Only a tiny percentage of BLM supporters or police officers have any intent to use their position to hurt other people, be it out of fear or anger. But these incidents cause dangerous, sweeping generalizations that ignorant people choose to believe. So, you’re right, we all have to listen. I honestly think part of the problem is that BLM protests seem confrontational–even if they’re completely peaceful a large crowd of any type of person could be deemed threatening to outsiders, let alone if people are carrying their legally owned guns along the way. And if someone happens to get killed, the confrontational setting almost makes it seem premeditated, even if that’s not really the case. But when cops kill people, I’d venture that the vast majority of the time (there are exceptions, I know) that it’s a split-second, fear-driven but ultimately regrettable decision. It should never happen, but I guess my point is that more often than not it is a terrible accident, whereas the killing of a cop seems more premeditated (because the killer had a choice to leave their gun at home, the cop does not). I know there’s so much more to it, but I think that’s at least one small part of the divide. Society is a mess and if we all just gave each other the benefit of the doubt, chose love instead of hate and fear, and trusted one another to do the right thing, we’d be so much better off. I don’t know how to build those bridges more quickly, but I commend you for giving it a try 🙂

Sorry it took me so long to reply Amy! I truly appreciate your input and think there is a lot of truth to what you see. Society IS a mess man. I have no idea what the heck little ‘ol me can do but by golly, it’s worth a shot 🙂

Guilty!! With all the hurt and anger I feel, I’ll be the first to admit I haven’t been a good listener lately.

So much hurt, so much anger Aly, it’s completely understandable. ((hugs))