We had a lazy day around the house Monday–My day off, after giving some visiting friends a tour of the city over the weekend. By the evening though we were getting a bit of cabin fever so I decided we should take a trip to the Goodwill outlet store.

I know I know… I wondered the same thing… Why in the world is there an outlet store for a thrift store? Well, every Goodwill store around here rotates their stock once a week. So once a week there will be an entire overhaul of stuff that wasn’t sold. All of that stuff goes to the outlet stores, where everything is sold by the pound.

You have to dig and I mean DIG to find stuff that’s piled in humongous bins, but there are lots of good finds to be found. I, however wasn’t a huge fan of the digging. Right off the bat I looked for a toy to hand Lil’ J to play with in the cart while we rode around. I’m not a huge fan of buying toys everywhere we go but they’re a good distraction while I’m shopping, and before we got there I said she could play with toys and this girl remembers my promises.

I handed her an Elmo pull and spin toy thingy. The kind where you pull the lever and it spins around talking about the shape/number the arrow points on.

That entertained her for a bit, but then I showed her this Elmo doll and she freaked. She has a Tickle Me Elmo but it’s not this animated. This one flaps his arms, moves his head, stands up, sits down, sneezes, dances, opens his mouth, blows kisses, and I don’t even know what else. The only thing I didn’t like about it was how heavy he was. She tried to hug him but quickly realized he wasn’t soft and cuddly, so I just stood him next to her in the cart and she danced along as we strolled through the store. 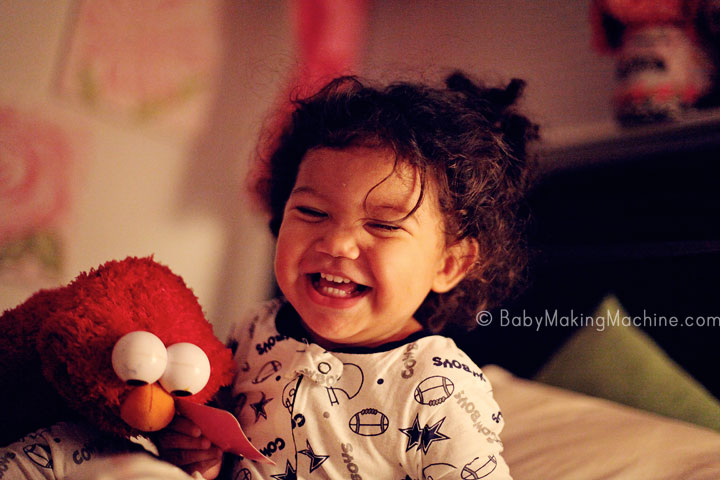 At one point she got distracted and I hid the toy while we prepared to check out but I noticed her looking around in the cart and shrugging her shoulders asking “Elmo?” I felt so guilty that I went back and got him. GAH!

The good thing was out of everything I got: The Elmo, a big umbrella, some skirts and sweaters to up-cycle to toddler dresses and a bunch of thread, was all just $8.

I brought Elmo in her room at bedtime and she asked me to set him on the bed while I read our goodnight story. Since the bed wasn’t a stable surface he kept falling over and hilarity ensued.

I just bought a new DSLR that has a video component but I haven’t figured out how to work it yet, so I used my handy dandy iPhone to capture the scene on video.

It took me a good while to convince her Elmo “went to bed” and he couldn’t play anymore. I’m hoping to sneak him a away and give him a good bathing down before she plays with him again. Not sure how yet. Hopefully a gentle rub with some disinfectant wipes will do the trick.

I had to laugh at this post. We introduced my son to Tickle Me Elmo at 17 months, and he freaked out big time. We had to explain, “This is Elmo. You know Elmo.” And graduallly he warmed up to the furry red monster, and now? At 20 months, he loves Elmo.

Aww, this is too cute.. especially towards the end when she got closer to Elmo, and he kinda fell on her and she screams LOL.. I have no kids of my own just yet, but my niece (3 Years old) has a tickle me Elmo, and it doesn’t matter how old she gets, she will still be amazed by his actions lol.

That is an Elmo Live! We got one as a hand-me-down from a friend. It’s provided a lot of entertainment! It got my son blowing kisses, which was fun. Did you know that if you leave him knocked over, after he asks you to help him get up, he’ll finally say that he’s going to take a nap (his cue to shut off)? So you can maybe use that next time when he’s going to “sleep”. You got a good deal, though, as he retailed for around $60!

Oh, and I forgot to mention–I think Febreeze has an antibacterial spray, which might work to help clean him up.

I love the video! Too cute! Thanks for sharing!

LOL! Nia LOVES her Tickle Me Elmo and Hokey Pokey Elmo too. I swear Sesame Street did specific psychological research to make Elmo toys latch into toddlers brains! Definitely check out the documentary “Being Elmo.” It’s so cool to see behind-the-scenes of Elmo.

It Moo a while to warm up to one of her Baby Alives. I think a wipe and a good spray with some Lysol will kill most of the germs. I love hitting up Goodwill and seeing what they have since most of stores donate their unsold merchandise to them.

My husband had them singing along to the Elmo song tonight. There’s something magical and delightful about that little red monster.

I hope your daughter enjoys him as much as my kids have.

That laugh is hilarious! Watched it a couple of times. Can’t help giggling too 🙂