Keep yo hands out my baby’s hair

I know my babies have the sweetest, most delectable looking curls you have ever seen. So enticing in fact, that you may find your hands wandering in its direction.

I’ve only recently began to notice just how frequently it happens. Last week we were waiting in line for a cookie at the mall when a little girl behind us started stroking my daughter’s head. Lil’ J looked at me like ‘Ma, who is touching my hair?’. I looked back at her and said “Oh, thinks your hair is pretty,” loud enough so the little girl’s mom would hear and maybe be prompted intervene. Yet she wasn’t.

I was torn between asking the little girl to stop, swatting her hand away, or just letting it go. I let it go.

The sad truth is, my daughter is pretty accustomed to people she doesn’t even known touching her hair. She used to frequently tell people “You can look at my curls but don’t touch them” but it’s not something I’ve heard her say in a while. I don’t know if she’s grown tired of telling people, or just gotten used to the attention, either way I still want her to know it’s not ok without her permission. 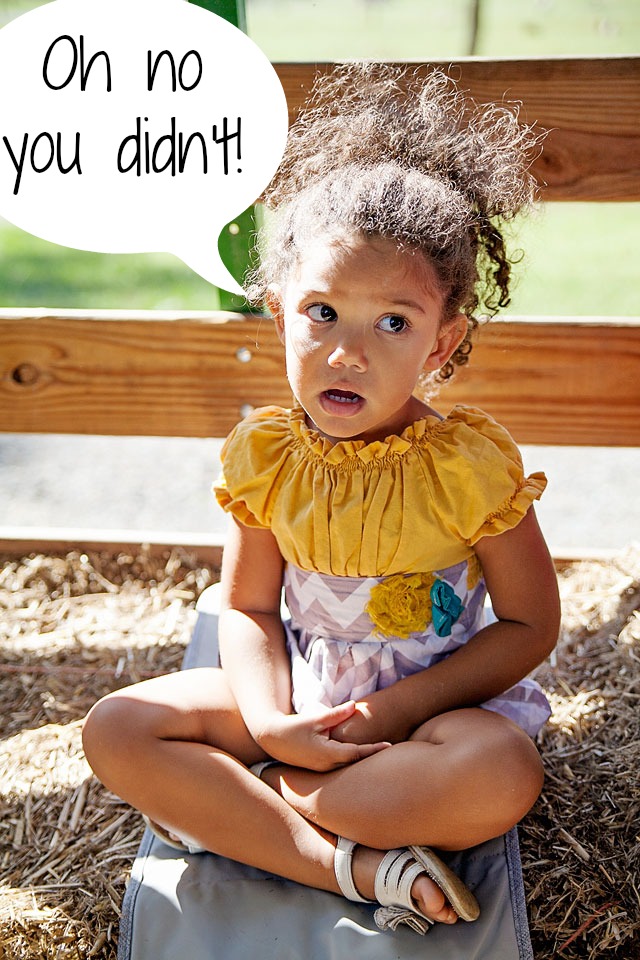 I could go on about the psychological aspects behind a child understanding their body is their own. But I’ll stick to the main point here… You touch my kid, I’ll cut you.

I know these strangers aren’t ill willed–The opposite in fact. Some cultures actually believe touching a child’s head is good luck.

But here’s the thing… I don’t know where your hands have been. I finally reached my boiling point when I ran in to grab a drink at a convenient store, son on my hip and daughter at my side. We were setting out things on the counter when one of the store clerks walked behind us, and as he did he grabbed my daughter’s pony tail. He didn’t yank it, but just kinda felt it like ‘oh that looks soft, I want to touch it’. He gave me a friendly smile as he did it but I couldn’t contain my stink eye, and had my son been in my Ergo and not in my arms, I might have smacked his hand, or punched his throat.

In that instant it hit me how often I have let it go. People want to rub my son’s head just as often, though usually when he’s close to me people will at least ask, my poor daughter is the perfect height for wantering hands that just have  to know what her bouncy curls feel like. 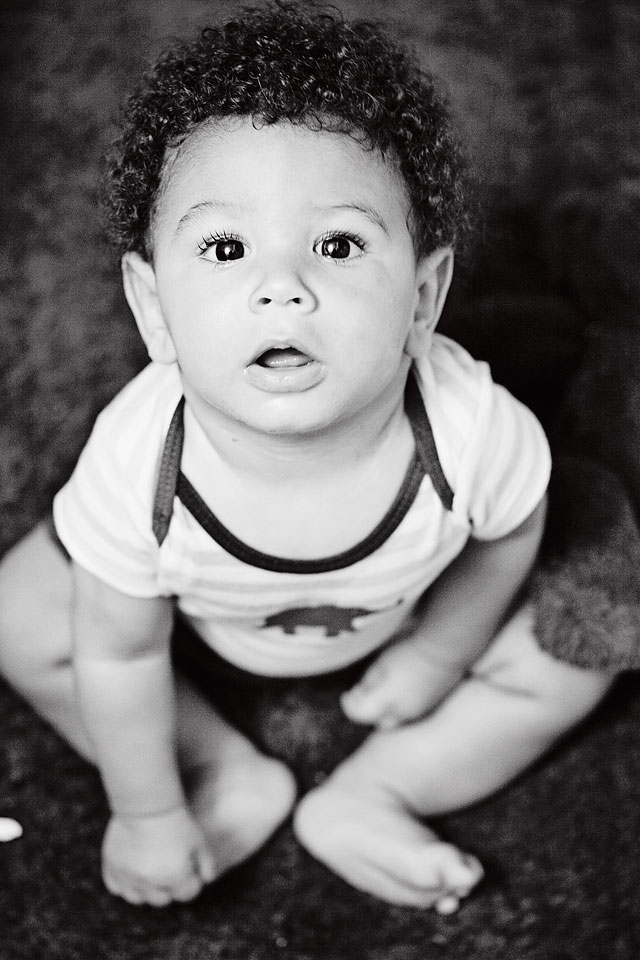 Yes, they’re fabulous I know, but they also take a lot of work to get them that way and I have to start all over again after your grubby hands grace her sweet locks.

Yes, their curls are irresistible, but I beg of you, please, resist!

I can just imagine how frustrating this is for your kids. I really don’t understand what the attraction is for people touching our curls. I’m 30+ and had to shut another adult down just this weekend because she was making a move to touch my hair without my permission. That rudeness is right up there with touching a pregnant woman’s belly.

Yes, the belly! That’s another one! People get funny about some pregnant bellies.

Oh man I hate when people do that!! Zach has long, thick, fat curls. Think Shirley Temple hair – only with bigger curls and a deep, deep red. I have been battling strangers touching his hair for almost ten years now. I’ll hear “Oh! Look at those beautiful red curls!” and then I’ll see a hand reach forward to touch. I have no issue (now) grabbing said hand and saying “Yes they are, aren’t they! But he really hates when people touch or mess with his hair.” And he’ll be standing there giving them this look like “Yo, back the bleep off.”

Of course for the past 5 years we’ve been battling a new hand set – the girls at school who think his hair is soooooo gorgeous. (He keeps his hair long)

Your son is soo adorable! I mean truly, just gorgeous!
If you are ever in NY we should plan a play date for him and my 8 month old daughter!! LOL

That is so rude of people to do that! Some people are just plain rude and have no manners – that is the bottom line. They were not taught that regardless of how gorgeous or nice some things are, it doesn’t mean you have the right to touch. I hope that your daughter gets her voice back and starting telling people not to touch again.

OMG!! Please continue to encourage her to protect her personal space. I just don’t get people. I am all about personal space and will let you know asap if you cross it and have done the same for my daughter who is now 18. She has a lot of her herself and people always want to reach out and touch it and she is very quick to say…”Please don’t, thank you”. Loved the share 🙂

Thank you Mari, I definitely will continue to encourage her. In fact, I think we may have a refresher tomorrow.

Wow, I really don’t understand why people think it’s okay to touch a stranger’s kid! I used to get people trying to touch my infant all the time, even if I was wearing her in a Moby and her head was clearly tucked in close to my chest, on multiple occasions I’d have someone pull back the fabric to look at her and pat her head! I can only imagine how much worse it is with such cute curly hair like your kids have. Maybe get her a hairclip with big red letters that says “Look don’t touch!” or something, lol 😉

Wow!! See I felt like babywearing helped keep curious hands off a little because they were in more of MY space vs just my baby’s but wow, people have some nerve!

I don’t understand touching another child at all! I would have let it go with the little girl but adults? No way! Just remind them that you are teaching your child that people should not touch them at all to protect them from pedophiles. If that doesn’t stop them then explain you will gladly cut their fingers off with a pocket knife that I will provide! Lol

Good for you! We need to have another lesson in this.

you are too funny…but it is true…One of my biggest pet peeve is when I drop my children at my in-laws with their hair fixed and all and when I pick them up their hair is whacked and brushed through, ribbons all out, and they look crazy. My daughter has curly hair as well…you don’t burst curly dry hair…HELLO!

OMG, yes please don’t try to brush the curls out! hahaha. Too funny, but I get it.

I didn’t know that was a thing? That’s a thing? Geez… how creepy is that?!

I was visiting family for my Moms birthday. My nephews daughter (beautiful bi-racial girl) has the most beautiful curls. I admit…fora second I wanted to touch them. I thought of you. I asked my sister (her grandma) and she said yes people always touch her hair. She thinks people want to see if they spring back. I guess it’s like a headfull of little springs and people want to play.

Seriously, though I doubt they’d like people’s hands in their hair so why do it to a kid.

I dislike putting shoes on kids that don’t walk yet, so for a long time my son went sockless and shoeless everywhere. People would randomly walk up and touch his feet. Some even kissed his feet! The joke was on them though. I know where his feet have been.

I have curly hair, I’m 34 since the 14th of this month and people are still trying to touch my hair. Usually with some weird comment before or after. If after, it’s usually, ‘oh!!! it is SOOOO soft!!’ and I’m always intrigued about what they expected and also a little offended that they feel free to touch me without my permission. If they touch my baby though, they’re definitely getting a throat punch! Not cool.

I thought of you when I read this (it’s 2 years old, but it randomly popped up as a suggested read while I was reading a recent news story):

I came across that article too (that Ricka posted above) and it reminded me or this post.

I can totally understand your anger about people touching your kids’ hair, it’s invading their personal space. I wouldn’t dream of randomly touching someone’s hair like that because I think it’s disrespectful to do it without permission. I’m mixed race and grew up in a predominately white area; I don’t have vivid memories of people touching my hair but I think some did because it was different. I remember when I was at a party when I was little, a girl followed me around, I think she found me interesting because of my skin colour and hair!

On the other side, my mum (who is white) says that in Africa her friends’ kids used to love to brush her hair because they weren’t used to European hair! lol.

I know, I’m a bit late here but I just had to comment…I totally feel your frustration. There are times I want to get physical with some of these nuts I encounter, running their gritty paws through my daughters hair. If only that was the extent of what strangers among us did. See we live in a tiny village in Austria. It gets quite a bit of tourists, most of whom (and the natives for that matter) have never encountered a biracial child. They ohh and ahh, reach for her hair and then proceed to take out there cameras to capture the moment. More than a few have gone so far as to try to take her right out of her stroller without a question. Listen, I’m originally from NY…that type of foolishness will get someone hurt and then arrested. Nonsense, utter nonsense!

Never too late! thanks for sharing! I can’t imagine what you go through there, wow! And yes, you’re right, can’t get away with that in a place like NY, haha!

Oh, this brings back memories. I have one child, she is now 26 with children of her own. People used to come up to her when she was a baby and touch her HANDS. I always went ballistic and ended up snapping at people as they approached, “DON’T TOUCH my baby!!!” I cannot imagine dealing with idiots who think they can approach a child and touch their hair. Ewww.

Your babies are absolutely gorgeous, but yeah…touching strangers’ children? No. On the other side, my last baby is 2 and I finally understand the desire to touch babies, LOL. I see the cute little feet and squishy rolls and I have to tell myself that touching people’s babies is weird and I wanted to cut a (you know what) for doing that when mine were little. 😉

Oh and this just reminded me of the Junie B. Jones book where she gets in trouble for pulling Lucille’s curls, LOL. Don’t worry, you’ll read the whole series soon enough. 😉

You'd think by toddler Round 3 I'd have things fig

Whether we’re following a free tutorial to draw

I was completely heartbroken when we told Jayda sh

#DoveAmplifiedPartner For years and years I straig