Is Jurassic World Camp CRETACEOUS Scary for Kids? A Review

Alright, so we’ve been doing Disney movie reviews here on Cherish 365 for years. I keep saying I’m going to branch out a bit and start adding some reviews for other studios. There’s so much great content out there and I’d love to give some input on other movies and shows your kids might like. Especially if you’re wondering if they might be too scary for your little ones. Jurassic World Camp Cretaceous is the first Universal Studios show, and Netflix exclusive we’re going to share about.

Jurassic World Camp Cretaceous Season 2 dropped this week on Netflix and we sat to watch them all in one sitting. We didn’t write a review when we watched the first season (we were a little behind when we finally realized it was a thing) so I’ll start there, and then share a review of season 2. I will avoid many spoilers while also trying to give you enough details to decide if the episodes might be too scary for your little ones.

I’ll keep this short assuming you’ve seen the first season, or just want to know the premise before deciding if you want to let your kids watch it. If you’ve seen the Jurassic World movies you will love the show. It follows young campers getting early access to Jurassic World. When everything goes wrong we get to witness what happens from the kids’ perspective. I especially enjoyed how the storylines lined up and overlapped. It has just the right amount of intensity for kids, but it’s not nearly as frightening or gory as the movies.

Each 25 minute episode ends on a cliffhanger and leads you into wanting to watch the next one. We watched this season in one day. And even the last episode left us hanging in suspense and hungry for another season.

Is This Show Scary for Kids?

If your kids have already seen either Jurassic World movie then this will not be scary for them by any means. The animated show is rated Y-7 but could be frightening for small kids. Especially kids who startle easily. It does feature dinosaurs and dark scenes and the famous Indominus Rex. There’s no blood and you don’t see people gruesomely eaten on screen. But there are many intense scenes that had us on the edge of our seat. I did think the first season of Jurassic World Camp Cretaceous was scary compared to the second season. As you’ll see in a moment, that felt more toned down.

I think it’s a great show for kids who love dinosaurs, and thrilling shows but maybe aren’t quite ready for the Jurassic Park series just yet. We personally skipped straight to the movies for our son around age 4 or 5, but we are holding off on letting our 2-year-old seeing them for a bit. In my opinion the show is perfectly age appropriate for him now (he’s 7) and though a little bit intense for our dinosaur-loving 2-year-old, she loves the episodes too.

We had a countdown for months awaiting the second season of this show and we finally got to sit down and enjoy it. After waiting months and months we watched it all in one sitting (with a couple of snack breaks).

Without giving too much away I’ll say that the villains in this season were much different than what we saw in the first season. You sorta know what you’re getting into with the dinosaurs you remember from Jurassic World being on the loose. Since this takes place after the movie, we aren’t sure what’s happening on the island and who’s there.

Both of my kids thought the second season was more enjoyable than the first. They liked the characters that they’d grown to love from the first season. And they enjoyed getting to know them more, cheering them on, and witnessing the ways they’ve grown. There’s a lot of mystery involved and there’s definitely enough questions left unanswered for us to assume and hope there will be a season 3.

The dinosaurs of course were just as thrilling, and though the Indominus Rex is gone, the T-Rex and other dinos on the island do give a good show. But is it too frightening?

Like I mentioned before, in my opinion Jurassic World Camp Cretaceous Season 2 isn’t as scary as the first. There are some frightening dinosaurs but the creators seemed to take it down a notch for this one. In the first season a lot of the scenes took place at night, and in this season a lot more of the story seems to take place during the day. There aren’t as many scenes with dinosaurs trying to chase or eat people. I feared more for the dinosaurs in this one. It’s more of a puzzle they’re trying to work along dinosaurs and finding a way to get home. But do they?

My kids had a different takeaway than me. Maybe it’s because it’s a new season they’ve been anticipating awhile, or maybe it’s because they aren’t as afraid of dinosaurs as I am. Here’s their takeaway.

What my 7-year-old son thought

Q: Which season was scarier?

A: Season 2 was scarier and better. Because the villains are scarier. I liked the show because I like the humans and it’s brand new. I watched the preview and I liked it.

Q: Do you think other kids would like it?

A: I like Darius because he’s a Dino nerd just like I used to be. And he likes animals. And I like Ben because he becomes stronger and I see what happens to him.

Q: What do you think of the show?

A: It’s exciting. You don’t have to like Jurassic World to like the show. It’s more about adventure.

A: I think Season  2 is scarier for kids cause they’re stranded. And the antagonists are scarier.

A: I liked this season more cause they’re stranded and learning to live by themselves.

A: My favorite character is probably Brooklyn because she has quick thinking and she’s an investigator.

Q: Who is the show good for?

Q: Do you think the show overall is scary?

A: I don’t think it’s scary for Lee Lee cause she doesn’t understand it yet but when she’s 4 or 5 it might scare her. In the first season the last 2-3 episodes were pretty scary. In this second season the last episode is scary.

We loved both seasons of Jurassic World Camp Cretaceous. There was plenty of humor, suspense, and of course lots of dinosaurs. Since I’m a fan of the movies I enjoyed sitting to watch it with my kids, so I’d call this a great show for families to enjoy together.

Here’s a trailer that may help you decide if you want to give it a try:

Have you watched Jurassic World Camp Cretaceous? What did you think?

Want to see how our movie reviews and taste compare to yours? Check out some of our other kids movie reviews. 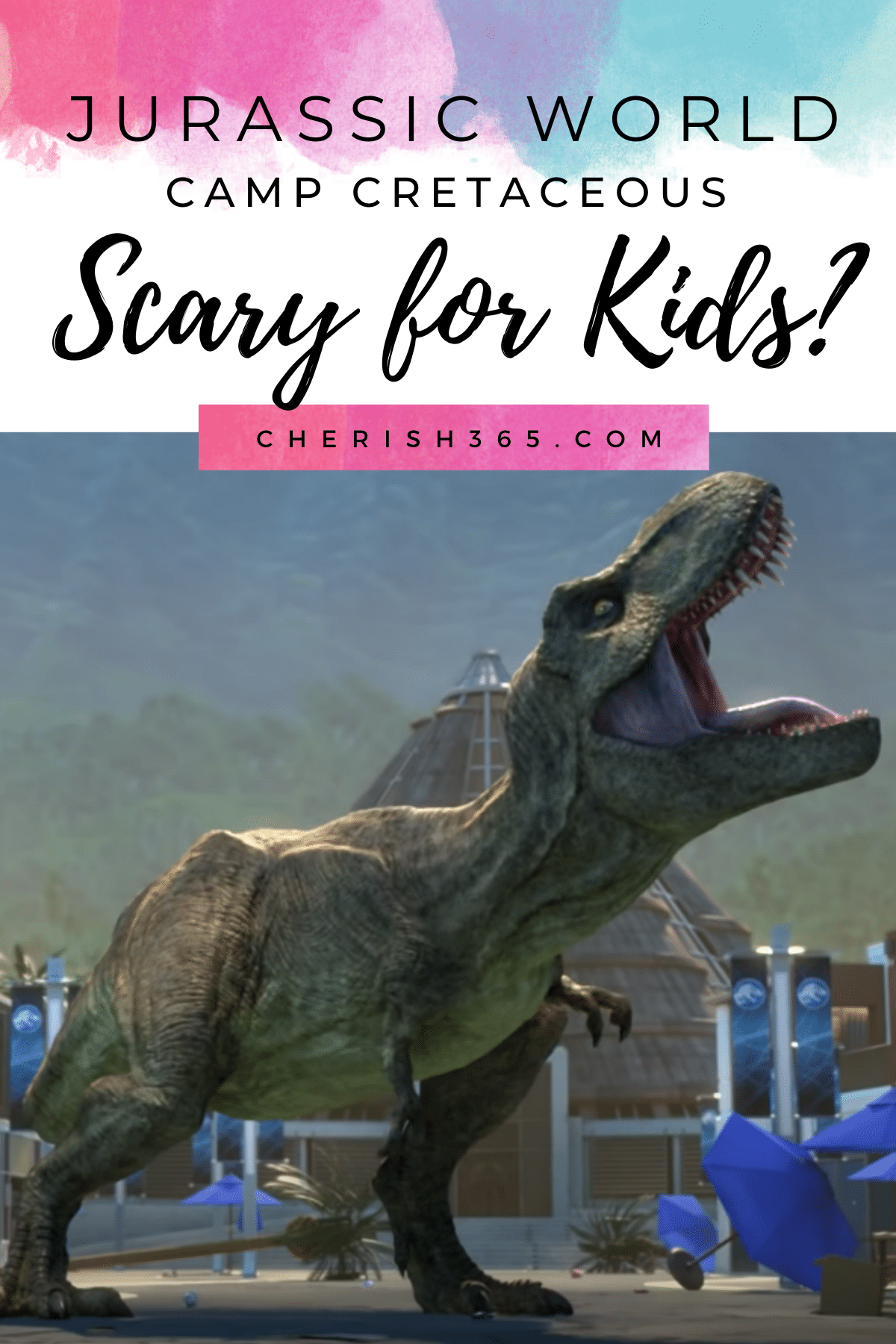