Is ‘Jungle Cruise’ Scary for Kids? Here’s What Parents Need to Know

Jungle Cruise is an action-packed adventure with lots of heart. It hits like Indiana Jones meets Pirates of the Caribbean with a lot more Dad jokes. This was the summer blockbuster I’d been waiting for and I think families will enjoy it. Specifically older families, or families with kids like my son who are jungle obsessed. Some of you might be wondering why the PG-13 rating and if Jungle Cruise is scary for young kids. We’ll cover that in a bit in this spoiler-free review.

I went in with high-hopes for this summer blockbuster. I’m thrilled to see Disney do a live-action movie that is not a remake, or prequel to an animated movie. The trailer sorta gives you The Mummy vibes. And though it was a delightful watch, it wasn’t anything to write home about. Would I watch it again? Sure, there was a lot covered and I’d love to catch bits I missed. Am I dying to watch it over and over? No. And neither are my kids.

Jungle Cruise is exciting and I’m sure watching it in theaters with 3D glasses is the way to experience it. Parts of the movie could feel like a ride. The CGI was great and it was fun watching it in our movie room at home but this is one made for the big screen.

While the graphics and thrills were awesome, the story was just ok. Emily Blunt was perfect in her role as Lily. And Dwayne Johnson, though one of my absolute favorites, felt a bit overpowering in this role. That said, his dad jokes were some of my favorite parts of the movie and there was still a lot to love.

Disney doesn’t shy away from a special coming out moment in this film. The sweet conversation between two characters had my daughter leaning over to ask me if he was saying what she thought he was saying and we toasted along with them. I loved that the moment was included and I hope that LGBTQ+ youth feel seen when they see it, and that others take note of the kindness that was reciprocated.

Is Jungle Cruise Scary for Kids?

Long story short, yes. Jungle Cruise is dark and scary for some people, particularly little kids. I gave my kids a warning so Jayda (11) was prepared but still not a fan of some of the “cringy” (as she calls it) parts. Ty (8), loved those parts. Sword fights? Cool! Walking snake people? No problem.

If you’re trying to decide who to take to the movies to see this one I’d consider this. Who was creeped out by Pirates of the Caribbean or The Mummy? Who hates snakes? You probably don’t want to take those people. Or anyone under 12 unless they are HUGE fans of the Jungle Cruise ride and/or action movies.

The dad jokes went completely over my kids’ heads. I laughed but had to explain the puns to them, which was annoying. There is quite a bit of sword fighting and gun shooting and a whole lot of loud explosions. Moments of peril, and murders in flashback scenes. It’s an intense one for little ones with sensitivities. We all agree that it’s a great family movie, but for more mature families with tweens and teens.

But enough about my thoughts. What my kids think will probably have the biggest impact on if you want to see it. Read their review below.

Jungle Cruise Kids Review from an 8 and 11-year-old

The best part of the movie to me was watching it with my animal-obsessed son who called out the name of each species he saw on camera. From types of snakes to animals I didn’t know really existed. There was even a brief shot with a black jaguar. He loved the action (one scene early on in particular) and it was fun watching it with him, but much of the plot went over his head. I think he would have enjoyed it more if he was older. Jayda just isn’t into action movies, so this one, though she likes more than Black Widow, she wasn’t really a fan.

J: I think it’s ok. I probably wouldn’t want to watch it again.

J: Just because it’s not really my type of movie.

T: There’s lots of animals I liked in it.

J: The parts with the jaguar.

T: Probably whenever the snake nodded. How do I make T’Challa do that?

Would you recommend Jungle Cruise to your friends?

J: No. I mean, I would recommend it to people who like Indiana Jones and Pirates of the Caribbean.

J: There wasn’t one big lesson but there were a ton of little lessons. Like face your fears, and trust.

T: That it’s fiction. If you’re in the jungle no plants will ever take you down like that. Because that was fake.

J: The jaguar. Because it was so cute and nice.

J: People who like Indiana Jones and Pirates of the Caribbean.

Do you think it’s more for older kids or younger or adults?

J: I would recommend it for older kids and adults. And kids like Tyree that don’t get scared or cringed out.

T: I think it’s for old kids, teenagers and grownups. It might just be too scary for little kids.

J: Not really. There were just some cringy parts. But I do think it was more scary than Pirates of the Caribbean, for me. I wouldn’t really want to watch it until I was 13. I feel like a good age to watch it is 13.

T: No, just for little kids.

How would you rank it compared to other Disney movies?

J: I think I like all of the Disney live action movies more.

J: I didn’t have a favorite part.

What would you rate it out of 5 stars?

Is it worth going to the movies to see/picking it for movie night/paying $30?

J: It might be a little scary to see in theaters. If you were going to pick it for movie night I wouldn’t really want to pick it if you have younger kids. But if your family is kinda older, like your youngest kid is 13, I’d pick it for family movie night, but not if you have a lot of younger kids. I don’t think it’s worth paying to see it, you can wait until it’s free.

T: I’m not picking it for movie night.

J: I don’t think you should watch this movie if you’re afraid of snakes.

I agree with Jayda there. And would add that you should go in expecting to have a fun time and nothing else. Jungle Cruise may not go down as one of my favorite live action Disney movies but it’s a fun summer fling.

Disney’s “Jungle Cruise” releases in theaters and on Disney+ with Premier Access on July 30, 2021. Are you planning to see it? Have you seen it? Let us know what you think!

And do you love watching, rating and reviewing movies with your family? Check out our Family Movie Night Journal. Bringing families together one movie at a time! 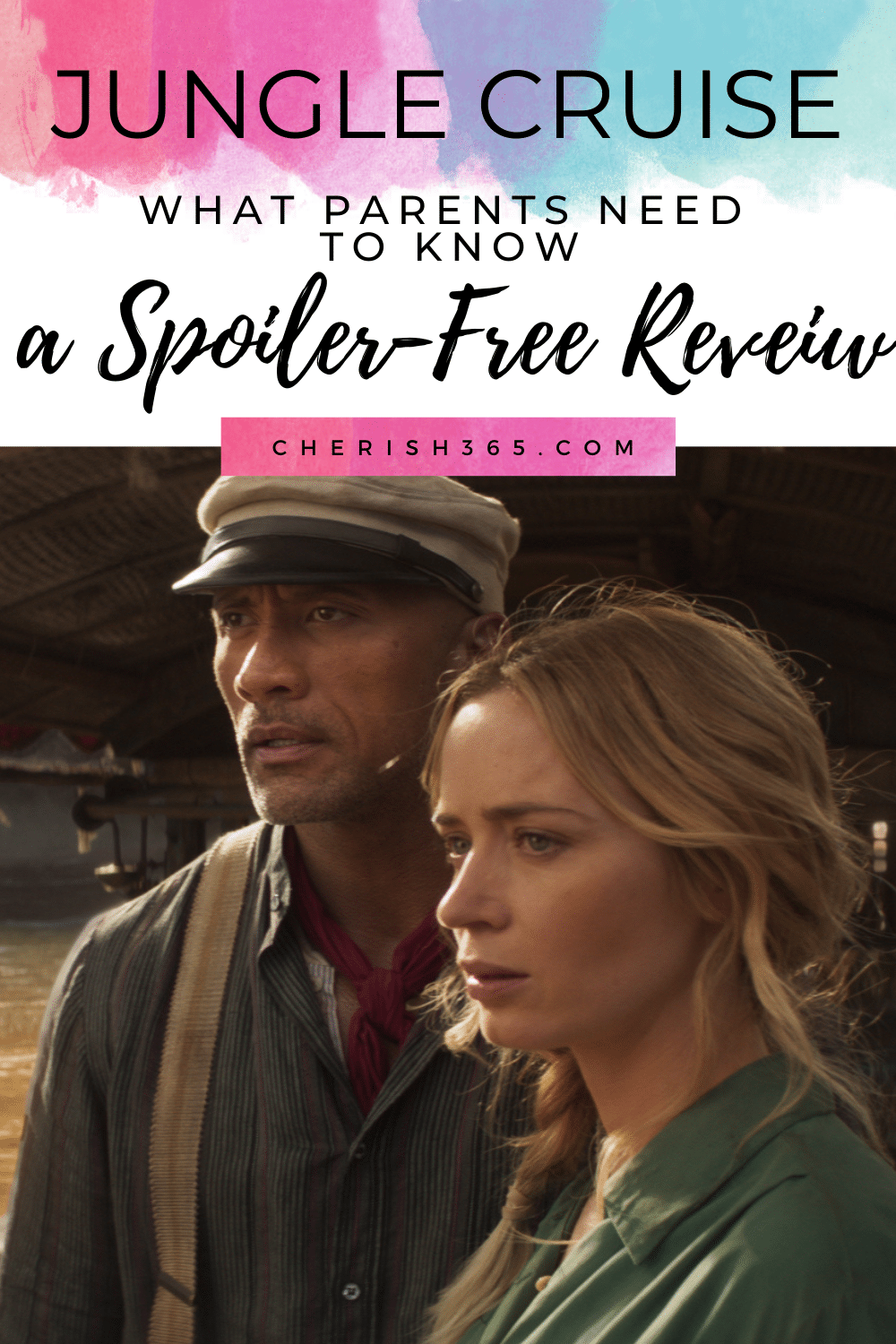