Is Disney On Ice Worth it? Here’s My Take and a 4-Year-Old’s Review

Is Disney On Ice Worth It? Here’s My Take and a 4-Year-Old’s Review!

I’d say it took a good three months for me to come down from my Walt Disney World high. I was having some serious withdrawals and could not stop talking about it every chance I got. It’s taken a lot of willpower to limit myself to one Disney-related post a week here on my blog.

So when I read that Disney on Ice Let’s Celebrate was coming near Austin, it was a no brainer that we’d go.

I bought tickets for opening night. So they were only $15, but after all of the fees and whatnot it was $45 for both. Oh yea, I didn’t bring my husband or son. The show was at 7:30, which was already past Big T’s bedtime, and I thought it would be more enjoyable for all of us if he sat this one out. So we made it a mother-daughter date. 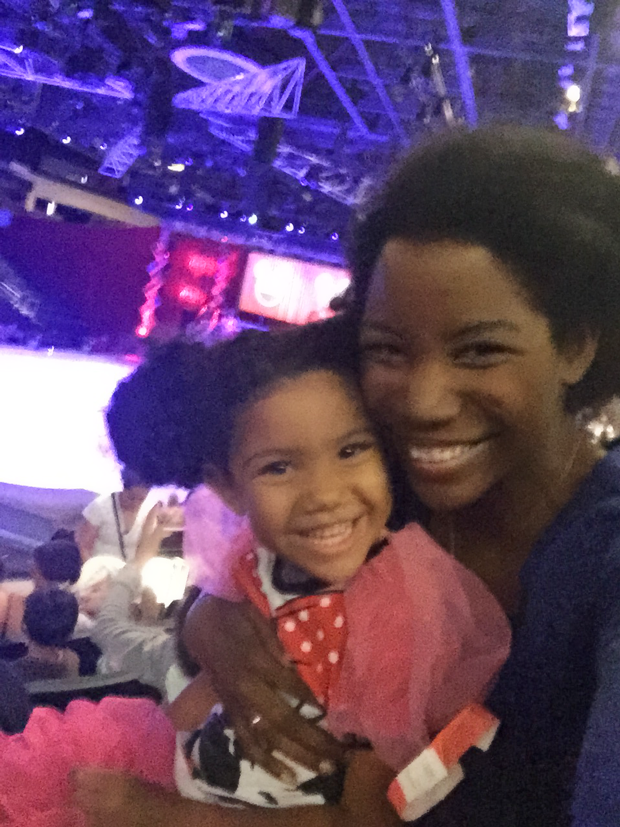 I told a few of our friends who also decided to get tickets and meet us up there. I didn’t tell Lil’ J we were going until we were on our way. I showed her a video preview on YouTube and she got excited, then I told her we were on our way!

I wasn’t sure which costume she’d prefer to wear, so I grabbed a couple and hoped for the best. I didn’t grab the right one, but whatever.

Parking was another $10, and cash only. That was a bummer but luckily I had just enough cash on me.

I tweeted the venue before the show to check and make sure I could bring my camera in. I called as well and didn’t get a clear answer so I took my chances and brought it. I guess because the lens wasn’t super far (the security guard mentioned my lens not being a long zoom) and I think because there was no flash, they OK’d me bringing it in.

Our seats were pretty good. Toward the center and not too far up in the stands. We had a great view of the arena. When the characters first started to come out my daughter completely lost it.

She screamed each and every characters name near the top of her lungs. At first I worried she was bothering people around us but other kids were screaming too and I mean come on… It’s a kids’ show. 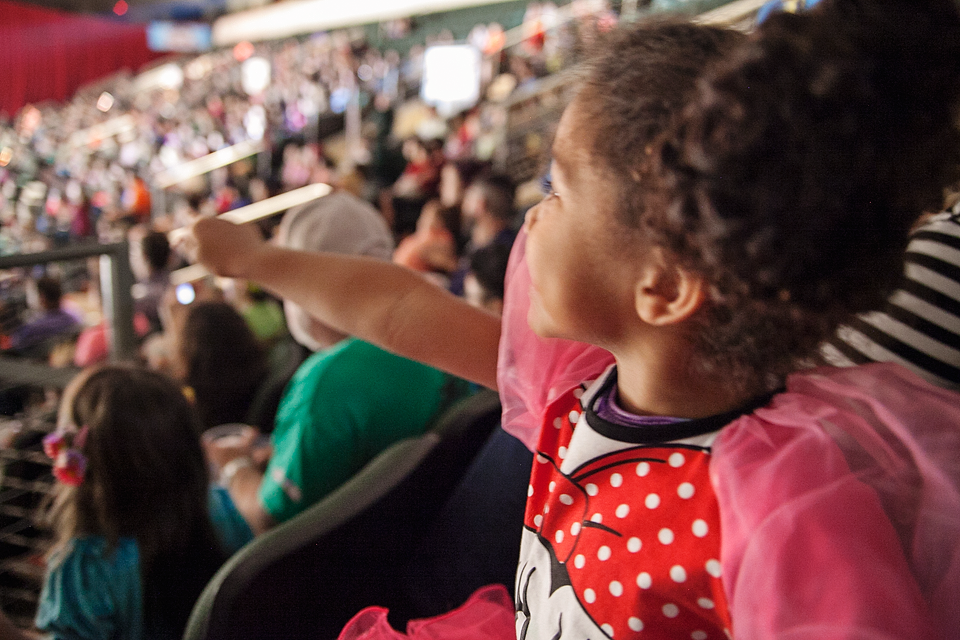 Surprisingly there were a few characters she didn’t recognize… Pinocchio, and Jack Skellington in particular. She recognized all the villains and screamed at Mickey Mouse to watch out.

That’s one thing I really loved about this show… The fact that there were SO many characters. Including our favorites: Mickey, Minnie, Tiana, Mulan, Goofy, and Lilo and Stitch.

I teared up while admiring her joy. She was completely and utterly in heaven. And so was I.

She preferred to sit in my lap the whole show, but I wanted to get some video of her reaction.

During the intermission I bribed her with a $12 snow-cone to sit in her own seat. It came in an Ariel souvenir cup, and they took Visa so I was a-ok with that. She still adores the cup, and secretly I do too.

I loved the Valentine’s portion featuring most of the Disney princesses and their princes. Lil’ J was quick to name the characters the moment they hit the ice, or name the song as soon as the tune started playing. I was one proud mama.

When Lilo and Stitch skated out she squealed. My daughter sang and dance through the entire song. Other people next to us watched her watching the show. I did too! In fact, I probably was just as much or more entertained by watching her than the actual performance.

She STILL tells everyone about it. Here’s her adorable quick video review.

She waved to the characters when they looked her direction and really felt like they were motioning to her. Gosh I love this age so much. During the second half of the event Lil’ J noticed the kids in the floor seats getting special interaction from the characters and asked if we could go down there. I told her those weren’t our seats, but mentally committed to getting floor seats next time.

I think parts of the show would have been intense for her on the floor this time, but that in the end we would have enjoyed it even more. It’s basically as close to Disney World as you get in Texas–or other parts of the middle of the country–No matter where your seats.

My 4-year-old was entertained from start to finish, and I think had we gone to an earlier show the next night my 2-year-old would have loved it too.

It’s easy to quickly go from “Oh it’s just $15 a ticket” to “Well there went $100.” But if you put your blinders on and avoid snacks and souvenirs you’ll be ok.

Disney On Ice’s Let’s Celebrate was truly a remarkable performance, and we’d definitely pay to see it again. Next time upgrading to floor seats and bringing the whole family.

Have you ever been to a Disney on Ice show or thought of going? What did you think?

The school my kids go to takes the preschool classes every year to whatever Disney on Ice show they have playing that year. I didn’t get a chance to go with my daughter Jada, but I did get to go with my son Jason when he was in preschool and oh my goodness he loved it! He sat in awe and amazement (and he never sits still lol) it was a great experience and one they never get tired of. I enjoyed it too especially when they had the old school Disney characters come out and I got to name them all for my son! LOVED IT!

Awwww, that’s so sweet! It really does seem like something that would never get boring. I’m so glad you guys had a blast too! Which show did you see, do you remember?

When my daughter was 6 we went to Disney on Ice. Needless to say it was awesome watching her enjoy the show. And to think we had nosebleed section seats in the Boston Garden. We also took Jackie to see “Lion King” (the Broadway show) when she was about 5 years old. It was spectacular!!

Oh my goodness we saw Lion King when Lil’ J was a toddler and I was so moved. It’s my favorite movie and I LOVED the show. I can’t wait til it comes back again. It’s stunning. So glad you also enjoyed Disney on Ice! I had no idea it would be so fun.

My parents took my 8 year old and my 3 year (and us) at the beginning of May. My kids loved it! My daughter loved yelling out the names too and they sat and watched the whole show which is quite a feat with my two.

It’s amazing when you find something they’ll sit through isn’t it? So glad your kids had a blast too!

I remember going once when I was about 6 or 7 and absolutely loving it. I’m now 16 and my best friend’s birthday is coming up. He’s the biggest Disney fan I’ve ever met and I plan on surprising him by taking him to the “Follow Your Heart” show near us, only a day before his birthday.
Although I don’t have a solid review at the moment, I think it’s safe to say it brings me just as much joy and excitement today as it did nearly 10 years ago!

This show just arrived here in Cape Town,South Africa and I type this just having returned from the awesome event. A lot of the kids had no idea of the Snow White character and some early others, but Oh…My..Word….when that Frozen part started the whole stadium was echoing along to the words…. (different times for different ages). What a fantastic show. Although we are not blessed with our own, we went with our niece and she was a spellbound and rivetted 4 year old with eyes glued to the ice. At 42 years of age and a guy at that…so was I…!

I’m so glad you enjoyed it too Alan!

I hated it, her father hated it, but she had a BLAST! LOL I have a video of her screaming Let it Go! LOL So I guess it was worth it since SHE had fun, but we won’t be going again. I love live productions and this one just didn’t do it for me.

Hahaha. I’m sorry you and your hubby didn’t like it! But I’m so glad your daughter did. Somehow it makes it all worth it for me.

I just bought tickets for us and our 2.5 yo daughter for November. I’m praying she loves it because I was way more than $15 where I live, but it’s so worth it.

Went yesterday with our grandson. We also took him last year to the Frozen Ice show in town. This year was quite different. Much more skating (2 girls fell down), and less props and action. Very underwhelmed. I’d skip this year (they went through many different stories instead of concentrating on one. We walked away with no memories, and nothing really stood out as worth the time. My grandson (3) was worse off than us. He wanted to watch videos on a cell phone after it was 1/2 way done.

I’ve been to Disney On Ice a lot, including this one and I have to say, this one was by far the best! I love that it incorportated a ton of classic Disney Movies including Pinocchio, Alice in Wonderland, and Princess and the Frog, but also incorporated some underrated movies like Nightmare Before Christmas and Lilo and Stitch (a show I saw before this one had Stitch make a couple of brief appearences with Mickey and the gang). I also enjoyed that most of Mickey Mouse’s friends was present (unlike recently where it’s just Mickey, Minnie, Donald and Goofy). But what topped it all off is how the opening number was just like the closing number having a lot of the characters instead of just random dancers.

I love that you loved it so much! We’ve only been a couple of times but I’d love to go again. We haven’t seen a lot of the new characters so we’d love to see Moana. But I’m with you, the classic characters are awesome.

They’ve been adding Moana segments to most of the shows since 2017, so you will see her in Disney On Ice eventually.