Is Cruella Scary for Kids? An Honest Movie Review With my 8 and 10 Year Old

The latest live-action Disney installment with callbacks to our childhood is Cruella. The animated 101 Dalmatians movie came out in 1961, with the live action remake in the 90s. (When I refer to the “original movie” in this post I mean the animated version). Where the other two versions are very family-friendly, even from the trailers you can tell Cruella has a darker feel. So you might be wondering is Cruella scary for kids, or if your little ones would enjoy it. This spoiler-free review of Cruella should help you decide.

Watching the trailer for Cruella, I didn’t have high hopes for this movie. I’ve heard people describe it as Devil Wears Prada meets The Joker. And while the previews looked a bit that way, the movie was different and pleasantly surprising. I went in with low expectations, planning to write it off as a “wait, don’t pay the premium” but the one word I used to describe it when we finished screening the movie was “surprising.”

There was a lot more depth and twists than I expected, gorgeous visual scenes that you’ll want to see on a big screen (either in theaters or on the biggest TV you own). And my favorite part, which Disney tends to do well–Very good storytelling. You get a glimpse at backstories for more than just Cruella and I was here for that.

The runtime of 2hrs 14mins was the biggest con for my 8-year-old son, who was into the movie, but felt it was too long and confusing. My 10 year old daughter Jayda, however, describes it as her new favorite live-action remake.

Honestly, my thoughts aren’t that far from hers. This doesn’t happen often for me, but Cruella is one of those movies I wish I could watch for the first time again.

Maleficent was the obvious comparison movie for live action retellings of the Disney classic movies. That one ranked towards the top of my list. Up there with Aladdin, and Mulan. In my opinion, the more the remake parts from the original movie, the better. Which is a big reason I wasn’t a fan of The Lion King 2019. Cruella raises the bar with excellent storytelling, dynamic characters, and enough nods to the original that had me gasping throughout.

Though not required, I do recommend watching 101 Dalmatians before Cruella to refresh your memory on names and characters. We watched it last summer, and I’d seen it a lot as a kid so I caught the references, but my kids weren’t as quick to catch on.

And because someone asked me… No, this version of Cruella has nothing to do with the weird number they did on her in the TV series Once Upon a Time. Alternate universe I guess.

Diversity in Cast and Characters

The cast was spectacular. Not only in their performance, but I loved how Disney wasn’t afraid to change the appearance of some of the characters from the original, as well as bring in new ones to have a more diverse cast. It makes me hope that if there’s a sequel (stay for the end credits and speculate with me) we will get to see more diversity on screen.

Is Cruella too Scary for Kids?

Ok, now that I’ve sung this movie more praises than I ever anticipated (I know, you’re probably surprised too), I have to dive into the nitty gritty about how family-friendly this movie is (or isn’t).

I worried my kids wouldn’t be into it but I had them sit down with me so I could gauge their thoughts. Right out of the gate they were drawn in and captivated by the backstory and seeing Cruella as a young girl. It is a bit fast-paced and some parts are better caught and understood on replay (one reason to consider streaming it so you can rewind, or re-watch parts that were confusing–IF you even want to watch it with them at all).

As from the trailer you can tell it’s a darker movie, again, let’s compare it to Maleficent. Where Maleficent was dark and sometimes a little intense, the overall story wasn’t extremely mature, a big reason it scores a PG rating. Cruella has a much longer run time, more violence, peril and sophisticated themes (hence the PG-13 rating). Ty understood Maleficent. There were many parts of Cruella that went over his head.

Even compared to Mulan, the violence in Cruella isn’t that extreme (I mean, they’re not at war). PG-13 has a very wiiiiide range of movies. I’d say this is at the much lower end. Cruella has some violence, but no shooting, fist fighting or gore. Some moments of peril, and a more mature theme than Maleficent. My guess is it just barely missed that PG rating because of a couple scenes, but those weren’t anything I felt the need to cover their eyes for. But whatever put it there, was worth it, because it’s good! I’m trying hard to keep spoilers out of this one, but if you really wanna know the dirty details check out Common Sense Media.

You’ll probably want to watch it more than once. You, the adult. If you do watch with younger kids, I’d prepare to pause and explain some of what’s going on. But then it just makes it less enjoyable for you. Though the movie isn’t scary per se, it’s not necessarily a movie for younger families.

But if you have older children (I’d say 11 and up), this could be a fun choice to watch together. Prepare to have follow up discussions about nature vs nurture, bullies, and more. More on my kids’ thoughts in their reviews below.

J: I really loved it. I loved how there was so much mystery in it. And the fashion!

T: There were lots of surprising parts. There weren’t that many funny parts.

J: [as seen in the trailer] When she was working as a designer and her boss nicked her.

J: Yes, because I think it’s a good movie.

T: Maybe some of them.

Do you think they would get it?

Did you learn any lessons from this movie?

T: I don’t know that much. It wasn’t that educational.

J: That things may not always be what they seem. Including the movie was better than I thought from the trailer.

J: All my friends, granny and kimmie.

T:  I would recommend it to Malekai and Maika.

Do you think it’s for little kids or big kids?

Is Cruella scary for kids?

T: No, I’m not scared of anything except BFG

J: No. Only when you were gasping.

J: I liked it. Yes, I’d definitely want to watch it again.

T: I would only want to watch it one more time. Because I think I may be too young for it.

How would you rank it compared to other Disney movies?

J: I think it’s a little different than other disney movies. Maybe a little like Maleficent 2, but I really liked it, maybe cause it’s more mystery.

T: It’s kind of one of my medium favorites.

Compared to other live action remakes?

T: Oh yes, I like it way more than Beauty and the Beast, I like Aladdin a little more. I like Live Action Lion King 10 times more. I liked Mulan more. But I liked Cruella more than the animated Mulan.

J: My new favorite live action! I liked it more than Aladdin.

Compared to the animated movie?

Is Cruella worth the $30 premier rate?

If you were like me you may have thought Premier Access on Disney+ meant you pay the $30 fee then you have access to the new movies for a year or so… Maybe at least a few months. But nope. Here we are again, another blockbuster, another decision to make. Pay the fee or wait until it’s free? I’d say if theaters are open near you and you’ve been excited to see this movie, go enjoy it on the big screen. If you are a big Disney fan but Cruella didn’t excite you with the trailers, I’d say this movie might surprise you. Maybe consider seeing it in a theater near you or buying it on Disney+ (whichever is cheaper). Before the screening, I wasn’t planning to buy it, but now I intend to pay to watch the movie again with my mom and sisters, who I know will enjoy it!

Cruella comes out this Friday May 28th in theaters and with Disney+ Premier Access. It’ll be joining the Disney+ library for free August 27th but it’s one of those movies you won’t want to be hit with spoilers for. So seeing it early could be wise if you’re a fan of the franchise. If not, no worries, it’ll be fun to watch this summer.

Either way, tell me what you decide! And once you see it, what you think!

Wondering how our taste in movies compares to yours? Read some of our other movie reviews: 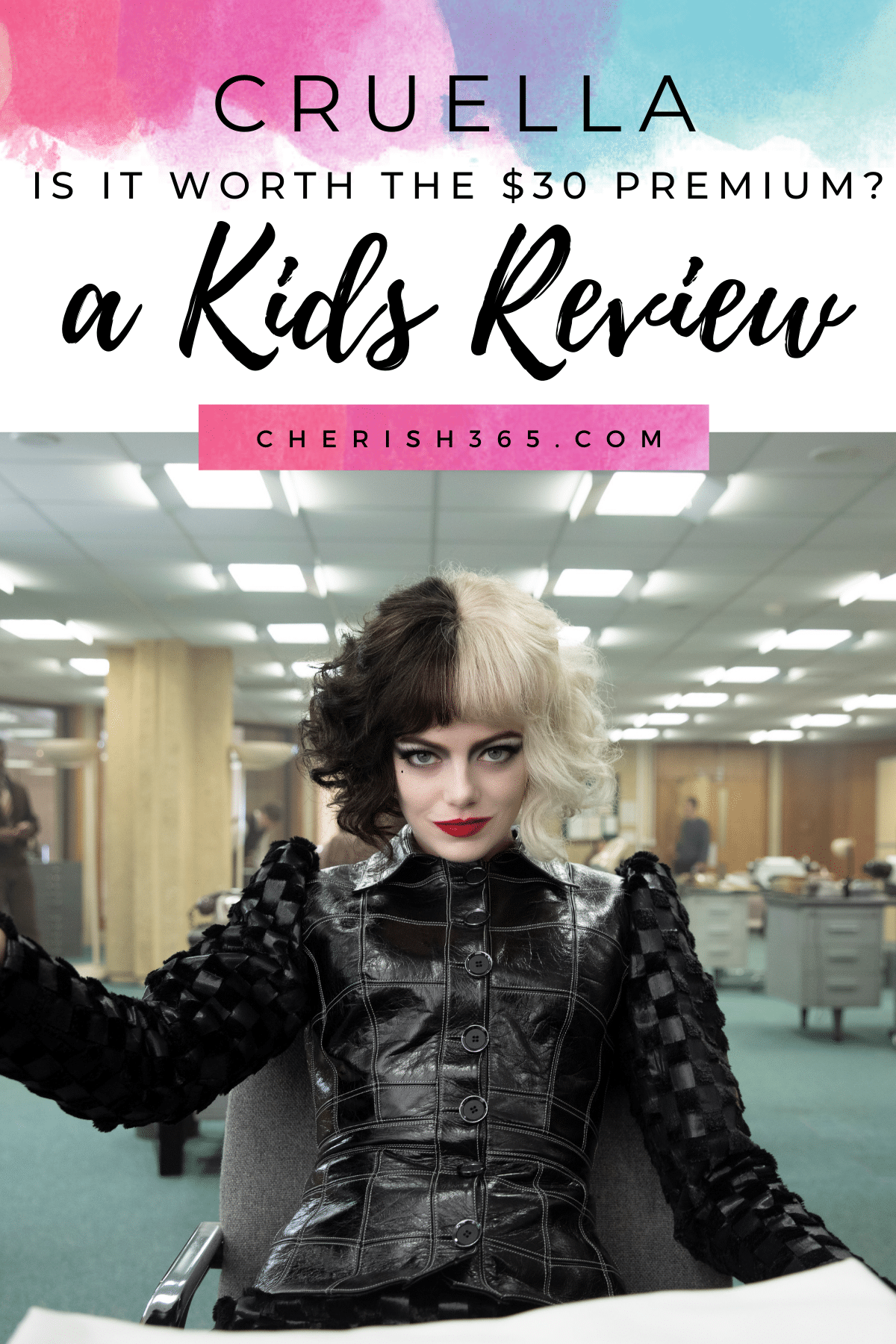 Thanks! Very helpful! (Btw, the phrase is “per se”—it’s Latin)

This movie is so great! My whole family watched it. My daughter was so excited about the movie. And as you have said, we were discussing the movie all the time while driving back home. And I was surprised that my husband liked it so much because he prefers action more. All of Estella’s antics are complemented by music that successfully highlights the mood of the movie. “Cruella” features songs from Bee Gees and Clash, and the plot is complemented by the lyrics of the song “Feeling Good” – these are win-win songs. And the costumes are … stunning!