Is ‘Coco’ Scary for Kids Under 5?: Coco Kids Movie Review

Ok I’ve been slacking on my movie review game. We got busy with Thanksgiving and then we all got really sick so I didn’t get around to posting this. But Coco was a fantastic movie and definitely deserves it’s own review.

We went as a whole family to see it and though I’d only really watched one trailer I did get to screen the first 30 minutes of the film a couple months ago and that got me really excited for the movie. I thought my kids would enjoy it, but I wasn’t sure how much. My son is an avid Cars 3 watcher, my daughter is only watching the crappy Percy Jackson movies over and over right now. So who knows.

We didn’t get to screen the Olaf short, so I can’t say how that was, we’ll have to update this when we go see Coco again. But so far I haven’t heard the greatest things about it so maybe we didn’t miss much.

Ok so let’s dive into our Coco movie review. 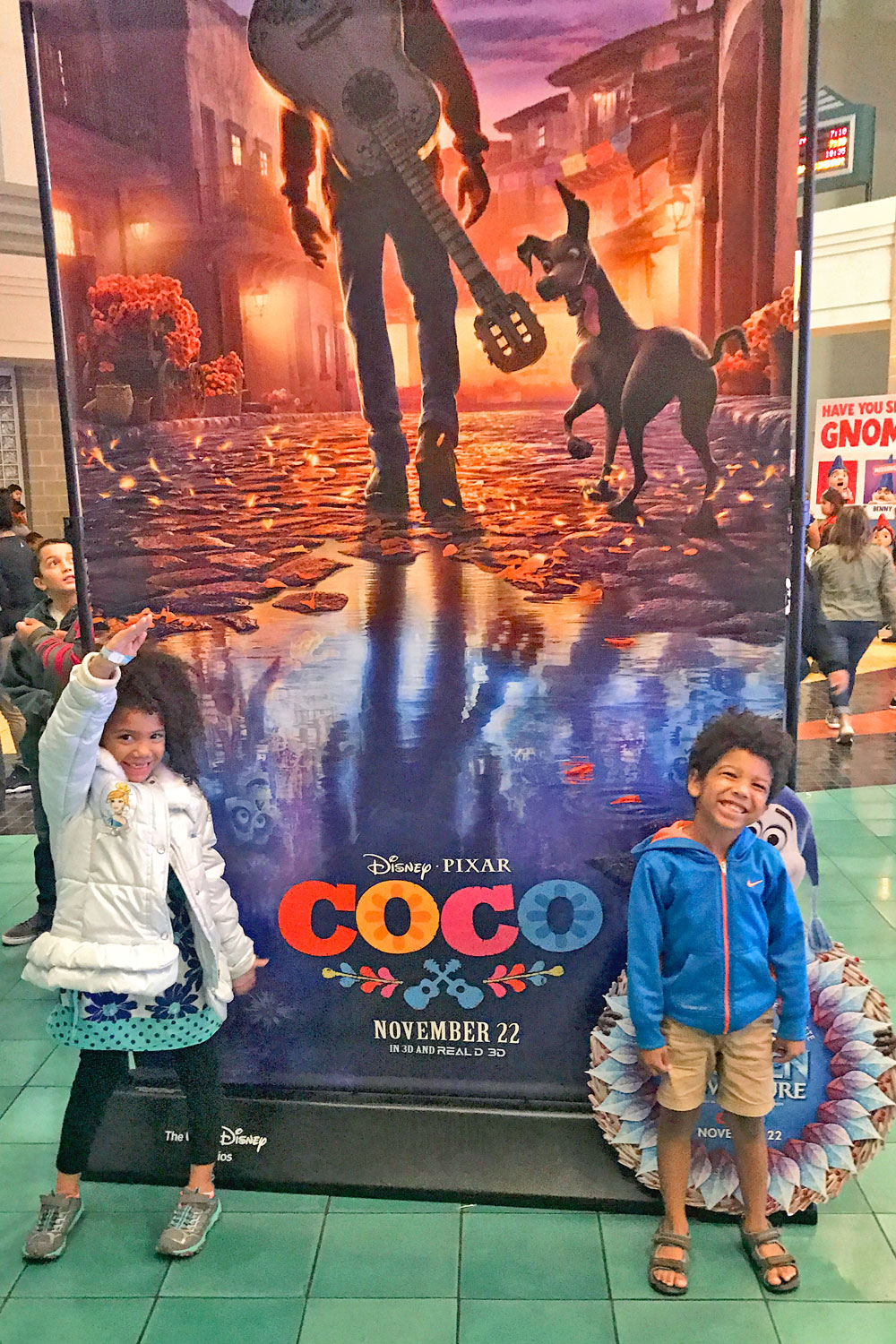 Coco is a family film to celebrate families

Pixar movies rarely disappoint and Coco definitely is up there with some of the best. There were plenty of laughs for both kids and adults, and so much beauty and meaning, It also didn’t hurt that the movie totally keeps you on your toes with twists and turns you don’t expect. Add in the fact that the movie has a great moral to follow your passions and celebrate generations of family and love and you’ve got a home run in my book.

I was watching the movie I kept thinking LDS people, or others who are really into family history will especially love this movie. It ties in the importance of the living to remember their ancestors. Coco isn’t the name of the little boy who stars in the film, that’s Miguel. And Coco is his great-grandmother, who lives with them. The movie really made me stop and think how lucky my kids are to know their great-great grandpa, who will be 99 next month!

I’ll admit I didn’t know much about Dia De Los Muertos going in to see this movie. I knew it meant day of the dead and that it was a day to celebrate ancestors. I knew it was mostly a Mexican celebration, but from my understanding many Latin countries and cultures have their own version and adaptations.

Coco laid out the celebration pretty openly, but not overly obvious. In other words, it didn’t take away from the story telling. A mom explained the ofrendas, and how the marigold petals are meant to help guide the spirits to their altars.  And that Dia De Los Muertos is the one night a year their ancestors can come from the Land of the Dead to visit them.

Another point I’d make about the culture throughout the film… I’d be curious to hear opinions of people who have family from Mexico/ are from Mexico/ know the culture and/or language. Being in Texas we have a large Hispanic population and our audience was hooting and hollering, some at parts where I felt like maybe I missed a joke. Like the grandma who likes to hit people with the shoe, you may have seen clips of that in the previews. It was funny to me, but I’m sure people who are in on that inside joke would probably understand it more. There were also occasional Spanish phrases here and there woven in with English which I thought was pretty cool. With context you can still follow along. I mean, you don’t need years of Spanish lessons to know what cacas means.

Is Coco too scary for kids?

Both of mine say no. But the big colorful part Jaguar part eagle part ram part five other things alebrije might be frightening to some small kids. The skeletons are all friendly but could be startling at first for some little kids in a dark loud theater. We watched it in 3D and I never for a moment worried about my kids being scared. But if yours have seen Zootopia or The Good Dinosaur, or even Moana and were fine, I’d say they’ll do fine for this movie as well.

So you might be wondering if Coco is appropriate for a 4-year-old. My son sat and watched the entire movie without one complaint. The skeletons didn’t scare him. I didn’t notice him laughing much but it sometimes takes him watching a movie a couple times to give me a reaction. My daughter however, was laughing several times throughout, and that always warms my heart.

From 7-year-old Lil’ J: Coco is a good movie for families to see because it’s about family. Miguel goes into the dead world to discover why his family doesn’t like music. They just wanted to make shoes, boring old shoes.

I think my friends would like it because it’s funny. It’s not scary, I think it’s good for kids 4 and up because my brother liked it too.

My favorite part was when Miguel was explaining to his great grandma how he used to run slow and how he learned to use his arms and run faster. It’s really funny.

I would like to see it again! It’s my new favorite Disney movie.

He’s still a man of few words but I imagine this will be another movie we have on repeat once (if ever) he tires of Cars 3 (because the rest of us already have).

Overall I loved the movie. My husband came with us too and enjoyed it. It’s personally not my favorite Disney Pixar film, I think a couple of the Toy Story movies and Finding Dory are still up there for me. But I’d say this is in my top 10 for sure, and I’m excited to see it again! So if you were on the fence about seeing this one, hop over! You won’t regret it.

Did you see Coco over Thanksgiving weekend? What did you think?

Thanks for this comprehensive review! I’m thinking of taking my 5 year old to see it, but he’s very wary of “scary” stuff in movies, so I’m still not sure if this will be too much for him. I appreciate your thoughts!

Thank you. Will probably wait to watch it at home.

I don’t think it was scary at all, and my kids didn’t either. It’s definitely not one of those Nightmare Before Christmas or James and the Giant Peach type of movies, which are mostly innocent but have some things in them which can be sort of unintentionally creepy. I see what you’re saying about the hybrid creature thing but even that I don’t think was really that scary. Just another great movie from Pixar 🙂

Thanks for the kids’ reviews. That means a lot!!!