When you introduce a 4-year-old to Broadway

“Are those real people on stage?” My daughter asked me as she watched Belle sing her opening song at Bass Concert Hall. She had no idea what she was in for when I told her we were going to watch one of her favorite princesses perform in a musical. 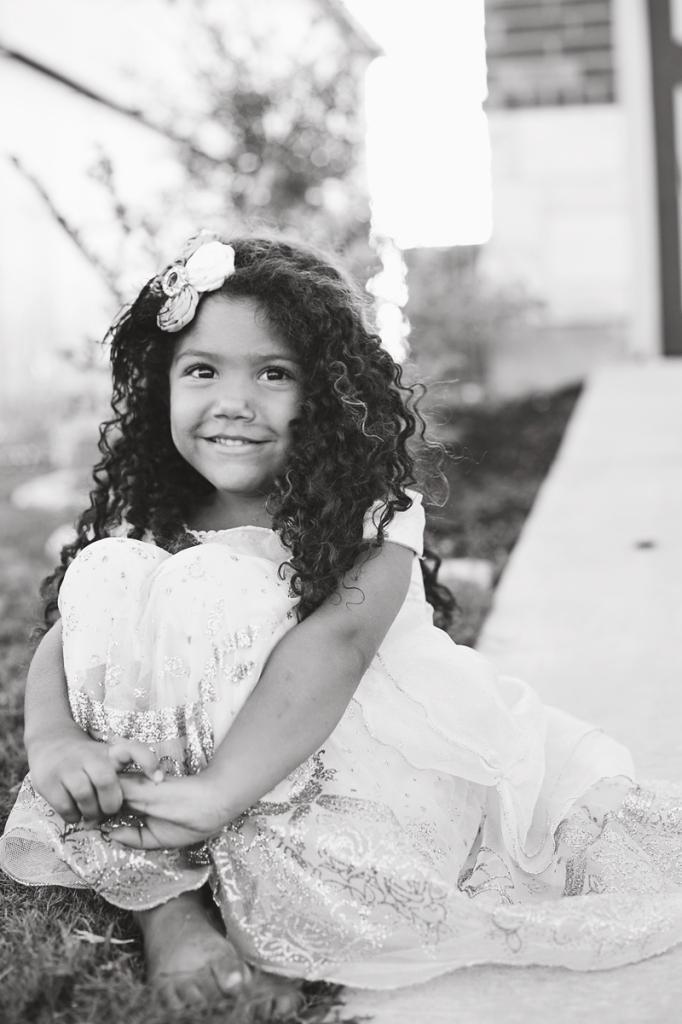 A couple of weeks ago my daughter and I were invited to go see a Boadway performance of Beauty and the Beast here in Austin. I, of course, a huge Disney fan was thrilled, and immediately started quizzing my daughter on Belle trivia.

But then there’s the whole idea of bringing my 4-year-old to broadway to sit through a musical. I knew my daughter may or may not be interested throughout the two and a half hour performance. I was a little nervous about bringing her to a theater show when she’s barely able to sit through movies, but I thought the mother-daughter experience was too exciting to pass up. And seriously, anything is easier than her brother right now.

We popped some popcorn and watched Beauty and the Beast the day of the show to have the story fresh in our minds, and then we got dressed up for the event. 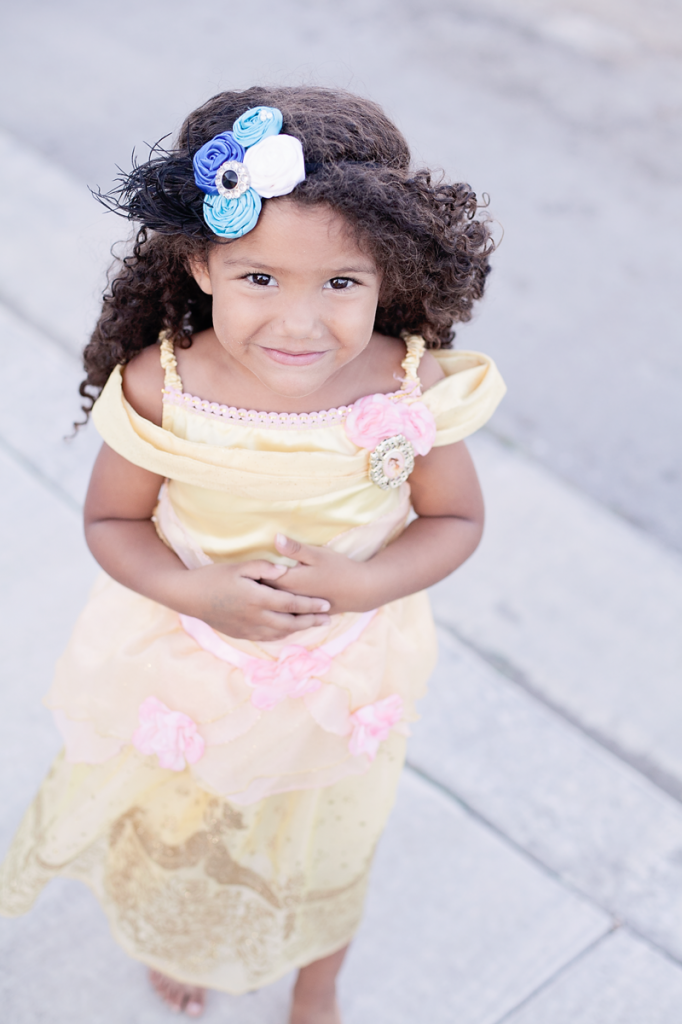 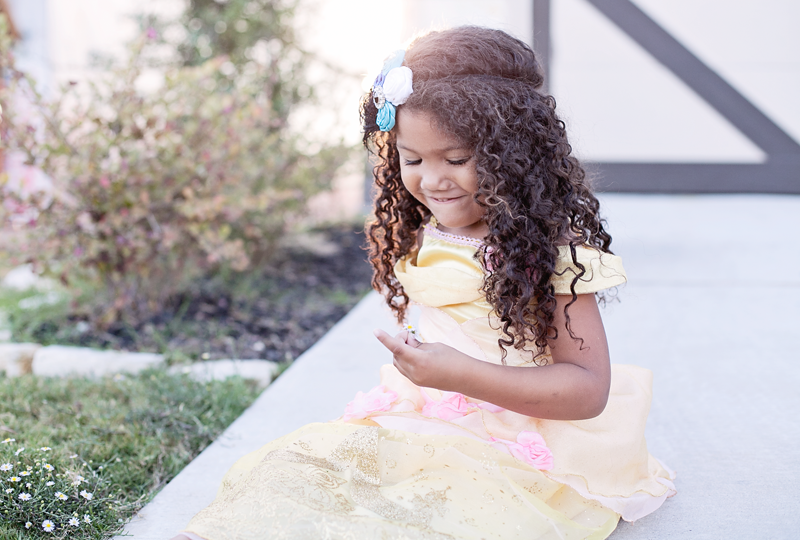 A couple of Christmases ago Santa brought her a Belle costume and she puts it on every few days when we play dress up.

My 9-year-old little sister, (Lil’ J’s Aunt Kimmie) joined us for the show. She wore a rose-patterned dress, and I wore a yellow dress as per my daughter’s demands. 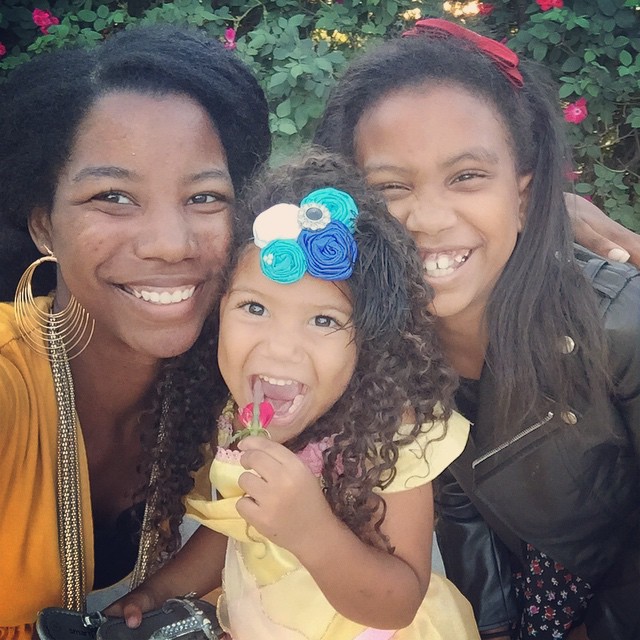 Since we arrived early we heard the orchestra warming up. I was a little bummed we couldn’t see them because I would have loved to point out which instrument was what. I get chills just thinking about the live band playing during the entire performance (it’s something so easy to forget).

My sister kept telling me how cool it was to be sitting near a stage, and thanking me for the experience (such a sweetie).

When the lights went down my daughter started bobbing up and down in her seat in excitement. Belle came opened with the same song from the movie, and Lil’ J swayed along then after a few moments leaned to my ear and asked, “are those real people on that stage?”

There were several moments of humor that seemed to go over her head. I’d laugh with the audience and she’d ask me why everyone was laughing. But some of the slapstick-type humor she caught onto. Gaston was way hunkier and funnier on stage than in the movie.

Closing in on intermission my daughter was ready for another pickme-up (we went to a late performance, so it was already past her bedtime). One of our favorite songs from the movie—Be Our Guest—was even better on stage, and had her clapping and excited with the surprises literally shooting into our seats.

At halftime I got the kiddos some Doritos and M&Ms which gave them a little recharge so they could enjoy the ending. 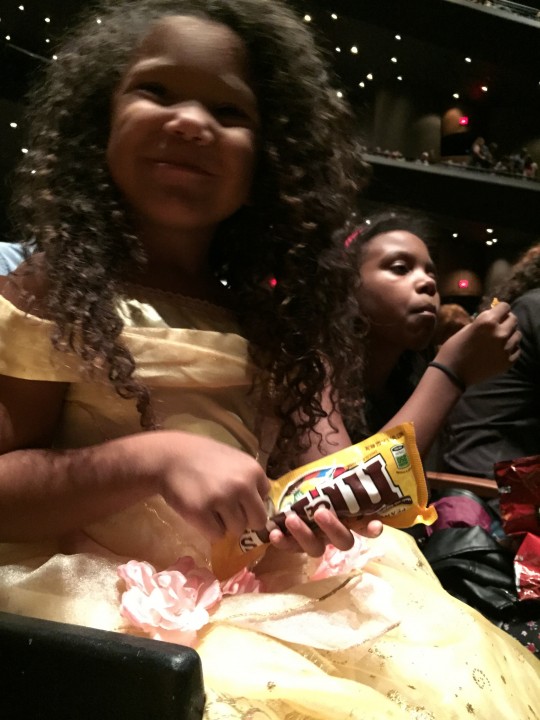 In the middle of “Kill The Beast” Lil’ J’s eyes got all big and concerned and she asked “is it raining up there?” I told her it was, but she was so fascinated and confused because it wasn’t flowing off the stage so she asked “but if I went up there, would I get wet?”

A million questions a day I tell ya. And they don’t stop for Broadway. 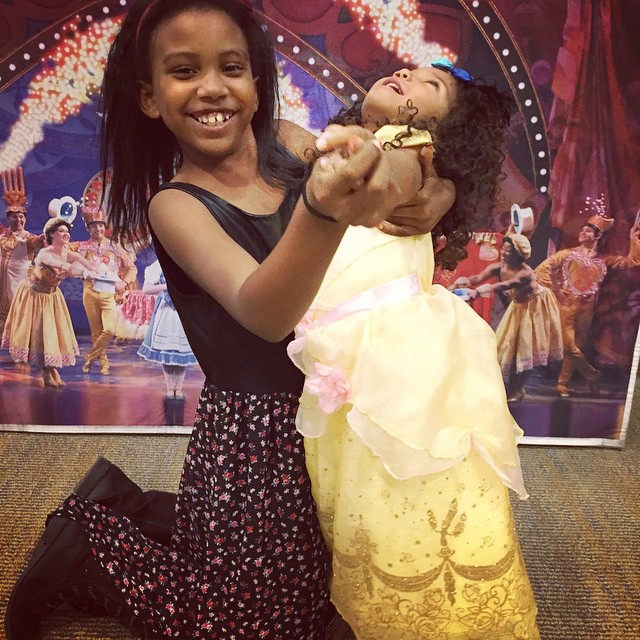 She also wanted to know why Gaston didn’t take his shoes off when he was proposing to Belle, and why he was singing and twirling her around(when it didn’t happen in the movie). Luckily she’s a soft whisperer but next time we may not watch the movie directly before watching a play considering all the differences.

My sister adored the play, and really seemed to appreciate the experience and talent of the actors. Afterwards the girls and I ran back to our car toting some of the show memorabilia that we caught. 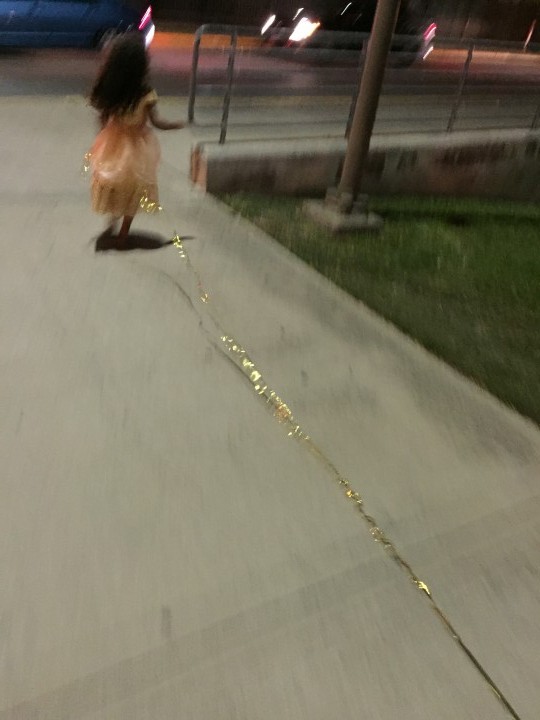 We’ve all seen a Lion King Broadway show together and that was incredible. Lil’ J was a baby though and slept through 80% of it.

Here in Austin there’s a nonprofit called Pollyana Theater Company as well that often puts on shows for little kids that are only about 30 minutes long and they have messages specifically for kids. We’ll definitely have to hit that up now that I know she enjoys theater. I loved seeing it myself but it’s always so amazing to see things through a child’s eyes, and open them up to new experiences. Here’s hoping there will be many more like this in our future.

Have you ever been to a musical with your little one? Did they or do you think they’d enjoy it?

Thanks for sharing your experience

Thank you! She loves dessup 😉

I have a son that is 15 and he sings, acts, and is getting into dance so our 3 year old has been introduced to theater since birth. She loves it! As a family we dressed up to see The Nutcracker and went to a special dinner after. It was an awesome family date! We have also taken her to ballets and an opera. The opera because my son was in it and she got understandably bored because it was in a foreign language and had subtitles.

That is so awesome Deborah! How cool that your kids are getting so much exposure to music theater and arts! I can’t wait to see what my kids are interested in and where their talents lie.

Love that dress…did you sew it?

Thanks Salma, actually no, I got it from the Disney Store a couple Christmases ago when it was on sale 🙂

It’s really beautiful…now that I have a girl (again), I am always looking at dresses 🙂

I’m glad you all enjoyed the musical. This is on my list of things to do with my kids. We have a few theater companies here and I’m dying to check out some shows.

Oooh when you do let me know what you think! I’m already excited to plan the next one!