Look, I’m just going to be real. I read Bachelor spoilers. And as soon as I knew a black girl made it to the final four all I cared about was her being the next Bachelorette.

“This is our shot!!” I told my sister. Rooting for Rachel was like rooting for the Chicago Cubs pre-2016.

Black girls just don’t make it far on this show. They’re the underdog on this bizarre reality show that we just can’t turn away from. In the 20-something seasons of this show they’ve never had a black lead. Hello! Black women want to find love too! (Let’s ignore the terrible marriage success rate of the show for the sake of this post).

So, night one of Nick Viall’s season of The Bachelor there are like 5 or 6 black girls who hop out of the limo. Definitely seems more than the average. All of them were beautiful but I had my eyes peeled for the one who would steal Nick’s heart. As soon as Rachel got the first impression rose I knew she was the one who would take it further than any other sista had in the past. 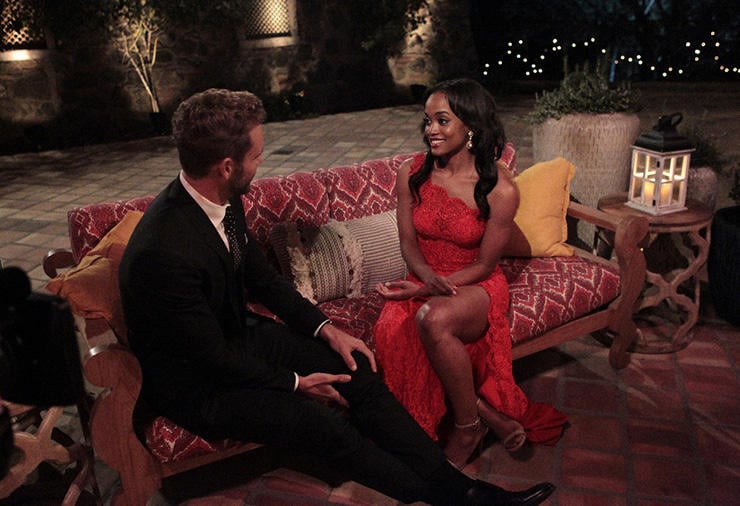 I texted a few friends my prediction of her being the next bachelorette.

Then, last week ABC did what they hadn’t done before and spoiled their own show to let the world know what I had known for weeks–Rachel doesn’t win Nick’s heart. But, she is the next Bachelorette (a better ending if you ask me because really, she’s too good for him). Which means I’m in a hurry to end this season and get on with the next.

I’m still amused though, watching Rachel’s remaining time on this show and figuring out where it went wrong.

Last night on The Bachelor we saw Rachel take Nick to her hometown where they brought up the interracial couple topic about a dozen times.

I rolled my eyes as it came up over and over and got almost cringe-worthy. Are interracial relationships really that taboo? Has it not been cool the last 12 years I’ve been married? I’d sure like to think it has. 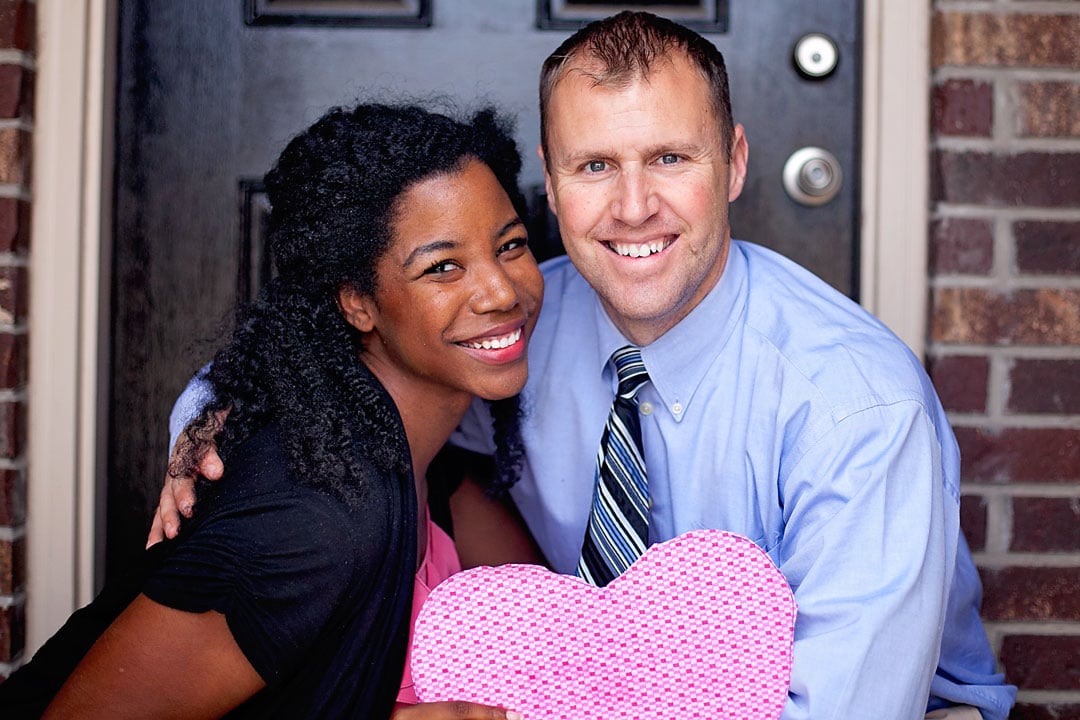 A few things about them beating this topic into the ground. Number one, I hope they don’t make Rachel’s whole season about that. I think she’ll have a diverse group of guys but I imagine a majority will still be white. So the interracial relationship storyline has the potential to be overplayed.

Three different people asked Nick if he had ever dated a black girl before and he was like “Uh, do group dates with Jasmine count?”

Ok, I tease. Really, he actually said a couple of things I thought were pretty great.

For one “I’m not colorblind.” Thank you Nick for not pretending like you didn’t notice she’s black. She is a beautiful, brilliant, funny woman and she is also black. No need to act like that’s not a part of who she is. No need to feign as if you don’t see it, like it’s something to be ashamed of. 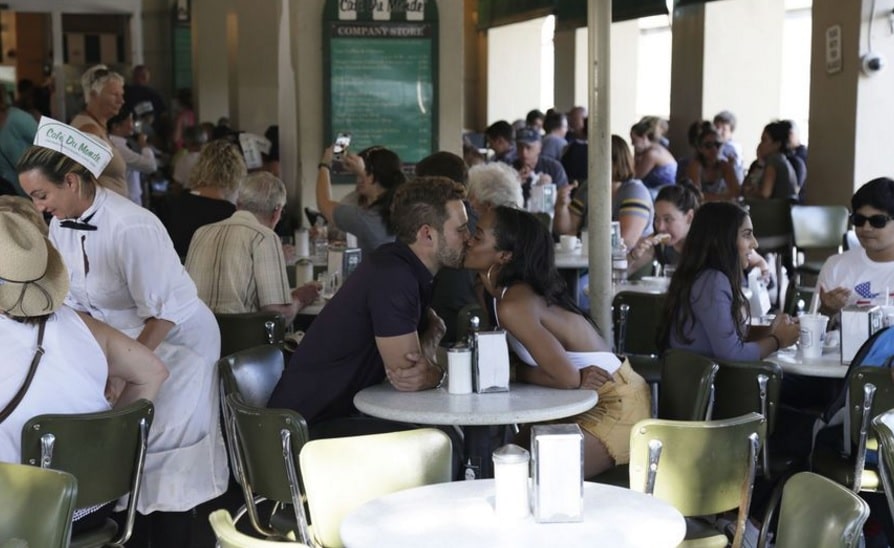 He also said he knew people/the public/viewers what have you, would make the conversation about their interracial relationship. I haven’t noticed as much hoopla about that until after they announced her as the Bachelorette. Now it’s all “Wow! The first black bachelorette!!!” And how that may be different–More on my thoughts on that later.

Another point brought up last night–I think by Rachel’s sister, is the fact that in today’s climate you do have to know how to navigate an interracial relationship. I almost completely agree with that.

On one hand it’s true. In today’s climate it’s important to have a partner who can understand black issues or at least empathize. If Nick was a white dude oblivious or in denial to the fact that racism exists, it would be a pretty big red flag. Rachel brought him to her black church–obviously an important part of her life. He needs to be comfortable in settings like that.

On the other hand, I think after you’ve been in an interracial relationship for a long time, you tend to forget you’re different. In my opinion it becomes less of an issue as time goes on. There are so many questions and noticed-looks in the beginning then after a while other things become more important. Conversations around race still come up–In the news, in sports, with friends. And that’s where being on the same page, or at least having a certain level of understanding is so important. 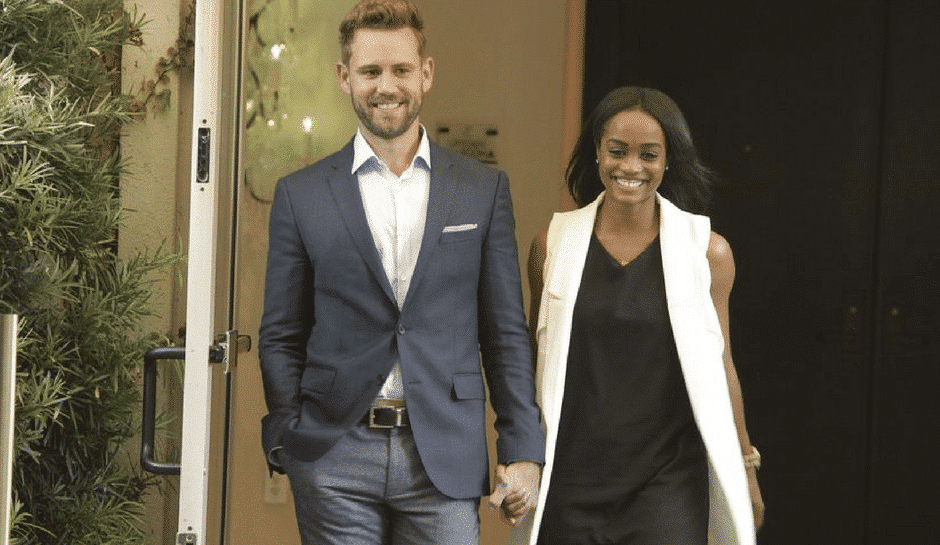 So yes, I’m excited about Rachel being the next Bachelorette. Not just because she is black, but because I think she’s going to bring a higher caliber of guys and conversation to the show which in turn brings a different kind of entertainment. And yes, because she is black.

Am I proud of ABC for casting a black lead? No. Is it about dang time? Yes! They could have done it years ago.

I’m rooting for her to find love, and if it helps normalize interracial relationships even more then hey, that’s cool too.

It’s good to see more interracial relationships on TV. My parents got together in 1979 (my dad was Cameroonian and my mum is English) when they were much less common (at least in the UK). Although they split-up when I was little, interracial couples seemed normal to me because I come from a mixed race family. There were less mixed familes and couples when I was young though. There are more and more these days.

Always love when you share posts that aren’t sponsored! I feel like I get to read your real thoughts without it being filtered with product placement. So excited watching Rachel be the bachelorette and you’re right! About dang time! Black women want love too! I also agree with your points about being in an interracial relationship!

Are you watching it? It’s been SO good so far I think! Thanks for your comment. I try to share my real thoughts on things regardless but I know what you mean 🙂 It’s fun to be random and just write about the cheesy TV shows I like to watch sometimes. I was thinking of writing a weekly recap but so far I haven’t watched them Monday night (I will tomorrow night though). Promise you’re here for it? haha!

good. but post like this shows huge desperation, white women don’t write articles about how cool interracial relationship is with a black man only black women do, it shows complex still exist among the black race.