Incredibles 2 Even Better Than the First?: My 5-Year-Old’s Take

Incredibles 2 is the most highly anticipated film of 2018.–At least for my family. And last week my son and I finally got a chance to see it. We had to hold our Incredibles 2 review until today to let you know our thoughts. But don’t worry, these will be spoiler-free. We want you to be as surprised as we were.

Normally for Disney movie screenings I bring my daughter. Or if okayed, I bring both of my kids. For Incredibles 2 I had a limit of one guest, so I had the impossible task to choose just one of my kiddos. Since my daughter has come with me to most of these things we thought it would be fair to bring my son for this one. 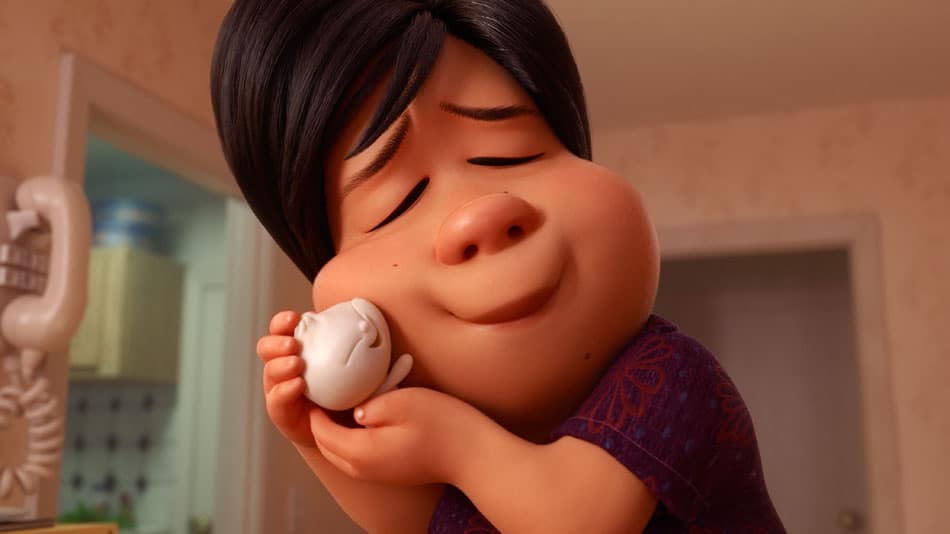 Before jumping into the movie, we got a warmup with the new Pixar short, Bao. It’s an adorable short film about a mother who’s apparently struggling with her little dumpling er… Son growing up. Several parts that had me laughing out loud then feeling all warm and fuzzy inside. I think the message went over my 5-year-old’s head, but he was able to giggle at some parts and follow the humor that’s present for parents and kids alike. Watching the movie as a recovering helicopter parent with my little mamas boy, especially hit home for me. I loved it, but let me know what you think of it!

So while I’ve been waiting 14  years for this sequel, my kids just recently fell in love with the original. If you’ve seen the first Incredibles 50 times in the last month like we have, then this movie will feel like an extension of that. It picks up exactly where the first one left off, replaying a part of the scene in the parking lot after Dash’s track meet when the Underminder comes out of the ground and them relocating to a new home since a jet crash landed on their last one.

There’s a lobby to bring supers back and they want The Incredibles and Frozone to help. The movie is jam packed with lots of action and humor to keep even some of the wiggliest 5-year-old movie-lovers entertained. My son was grinning ear to ear while we watched our favorite super family navigating their new adventures. He seemed to follow along with the storyline and was really rooting for the good guys in the end.

We get a closer look at the entire Incredibles family including Jack Jack who has powers he hasn’t even begun to tame. (Those moments happen to be some of our favorite parts).

If you haven’t seen the first movie (though really–Why not?) you won’t be totally lost. It’s expected you’ll know who the main Characters are–Mr. Incredible, his family, Frozone and Edna (the Super Hero wardrobe designer). Other than that there are several new characters and a couple of old ones you’ll get to know and love.

To say I loved it would be an understatement. Jack Jack steals the show and the family dynamic makes this movie one of my favorite Pixar films to date. It was everything I’d hoped it would be and then some. 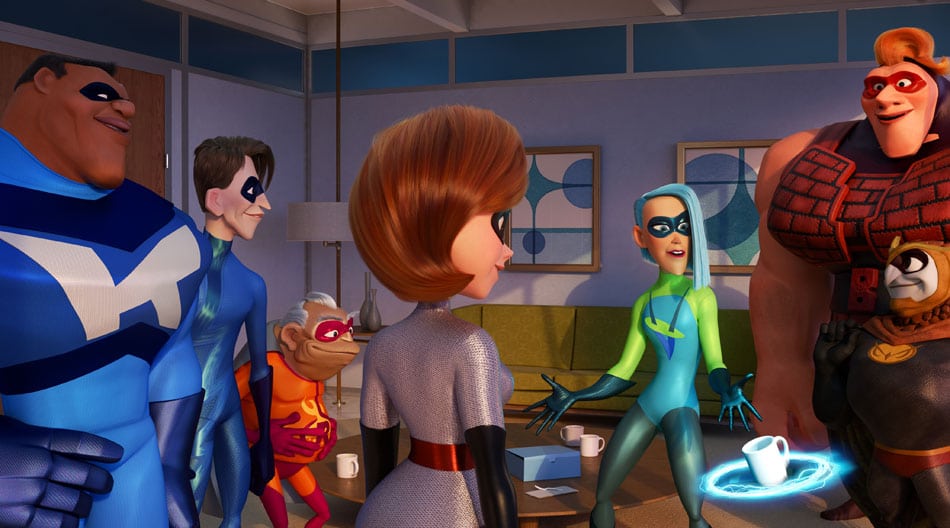 My only gripe about the movie was that I felt I saw the ending a mile away. The storyline seemed a little predictable. Or maybe I’m just constantly guessing those types of things. Or maybe that’s the point and I shouldn’t even brag about it. It didn’t take away from my enjoyment. In fact, I felt a little vindicated watching it play out. My 5-year-old, who hasn’t watched as many action/spy movies as I had was in his own little blissful world just loving all the action.

There’s nothing better than the sound of my kids laughing hysterically during a Disney movie. A close second perhaps are the jokes and humor that obviously go over their head but are for my benefit. This flick has plenty of both. The physical humor is what had my son laughing–Particularly a scene between Jack Jack and a Raccoon. I enjoyed the throwbacks to the original as well as the eerily familiar martial banter.

Is Incredibles 2 Scary for Little Kids?

There weren’t any scenes that had my son covering his eyes or crawling in my lap. That said, this is a kid who wants to go see Jurassic World 2 next week. Still, I don’t think Incredibles 2 is scary for young children. Nor difficult to follow along. There isn’t anything startling like in Zootopia, and the violence was pretty comparable to the first Incredibles. The storyline was a little darker, but there was a lot of upbeat humor and physical comedy to keep things light.

Side note worth mentioning: My son was calling the bad guys “zombies” not because they were, but because some of their motions were robotic or hypnotic. If that sort of thing freaks your kids out then I guess there’s that to be aware of. As always, remember big screens, loud speakers and dark rooms can make movies we know and love feel much more intense.

Incredibles 1 vs 2: Pixar Gets Their Sequels Right

I go into movie screenings with a piece of paper to write down my thoughts, little things I notice about my kids’ reactions and critical points of the film. This was the first time I came out a screening with a near blank sheet of paper. Shortly after it started I was completely engrossed in the movie and enjoying it for what it was. It didn’t feel like a weird spin off of the original, it stayed very true to it’s roots. So much so that it really felt like an extension of the first. 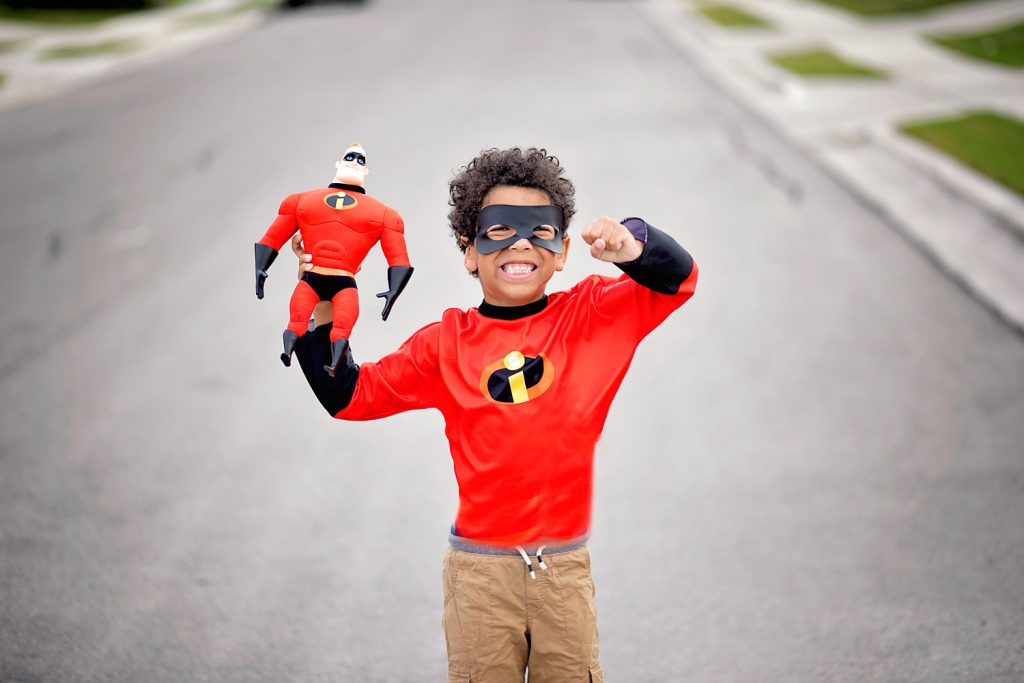 Did you like Incredibles 2?: Yea! I want you to put it on the TV. Can we watch it on the TV?

No, not yet. Why did you like it?: Because it was pew in baby Jack Jack eyes. [Laser eyes]

What was your favorite part?: The part when the baby was fighting the… The Squirrel? No, it wasn’t a squirrel. What was the baby fighting mom? A raccoon? Yea! And the part when Dash was running fast. Does he run faster than my dad?

Do you want to see it again? Why? Yea! Because! Because I really liked it.

Should Daddy and [big sister] go see it? Why? You and me, and Dad and [Lil’ J] we’ll all go see it. And when the baby sister comes out. I think [Lil’ J] will like it. She will like when they pew the eyes.

Was the movie scary?: No. When the guy came and turned the movie on it was loud and it scared me.

Which movie did you like more Incredibles Number 1 or 2?: Number 2. Why? Because I hadn’t seen the pewing part.

So there you have it! Straight from his little mouth. This movie had all of his favorite things: Trains, helicopters, motorcycles, animal battles, jets, boats, laser eyes.

Hopefully you enjoyed our Incredibles 2 review. We may update this post with my 7-year-old daughter’s take after we see it again this weekend.

Yes, see it again! It’s a great way to kick off the summer with a movie the whole family will love. So go see it then come back and let us know what you think! 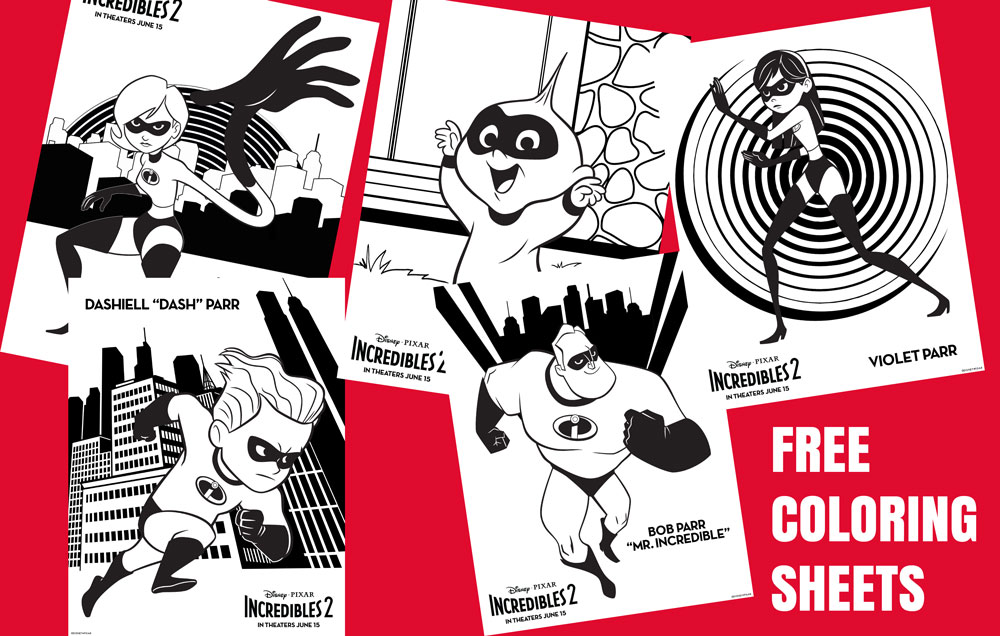 Click here or on the image for free downloadable Incredibles 2 coloring sheets. 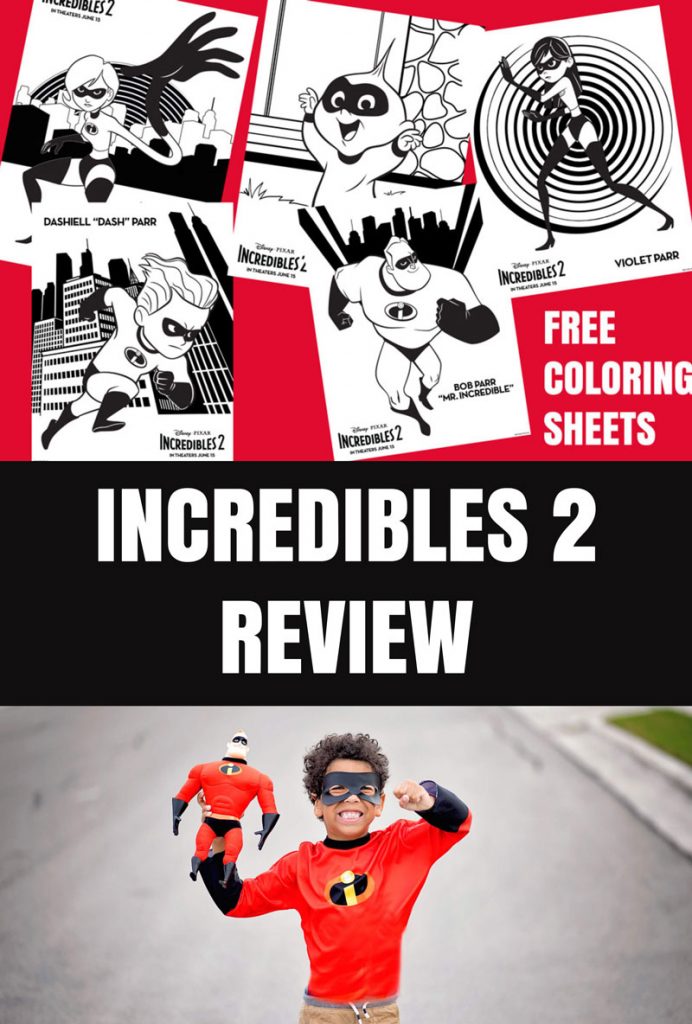 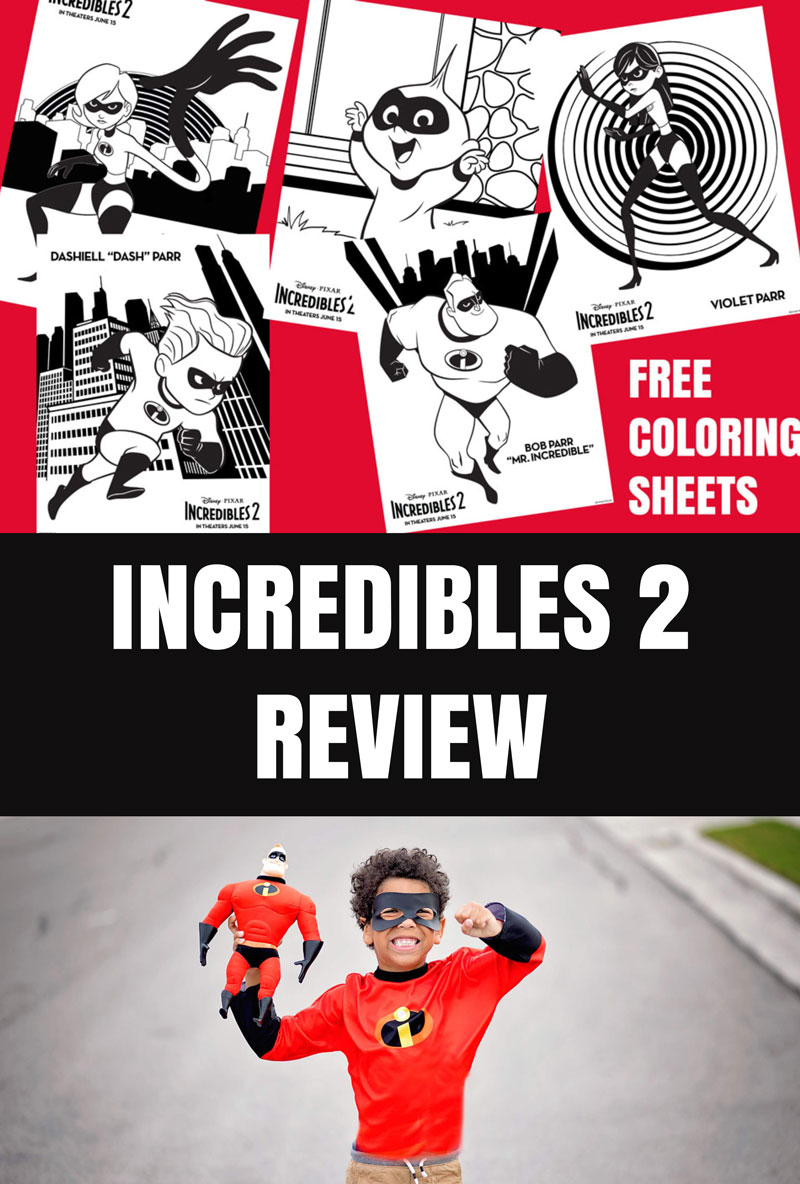 I can’t wait to see it, my boys are turning 20 and 17 this summer and had many Incredibles toys, clothing, etc. My oldest wanted to be Dash. My daughter is 9 and can’t wait to see Jack Jack and the continuation of his powers. Hopefully we can coordinate everyone’s work schedules to see the movie together shortly after it opens and I will let you know what we think!

Amazing review thank you for sharing we are looking forward to this upcoming movie keep posting great content.

incredibles 2 is amazing movie. Thanks for sharing here review.

This is a great content amazing riview by you
keep posting.