“Do you remember the first game we went to?” I asked my husband casually as we were getting the kids ready for bed.

“The first game when we were married?” He asked for clarification but kept going before I could answer. “It was BYU vs Tulsa game, we won by a lot. And that was our first game as students, that would have been fall 2006. We walked there from our apartment. Why?”

A simple “yes I do” was really all I was looking for, but he went on. 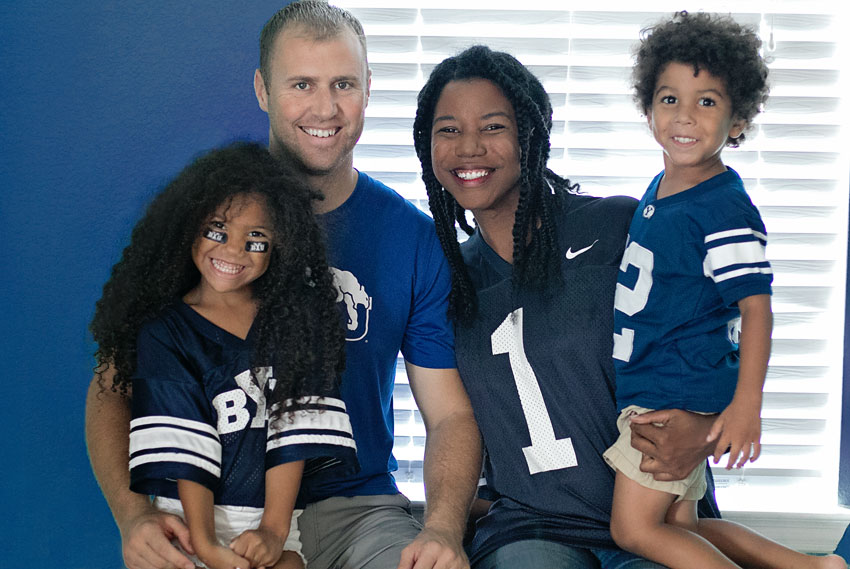 “We took pictures, I was wearing a dark blue shirt and a white hat. Don’t you remember?”

No, I didn’t but I googled it to see if he was just talking out of his rear end and sure enough, he was spot on. BYU vs Tulsa, Oklahoma at Lavell Edwards Stadium. We won 49-24.

This set off a challenge of sorts where I challenged his insane ability to recall BYU football games and their scores. 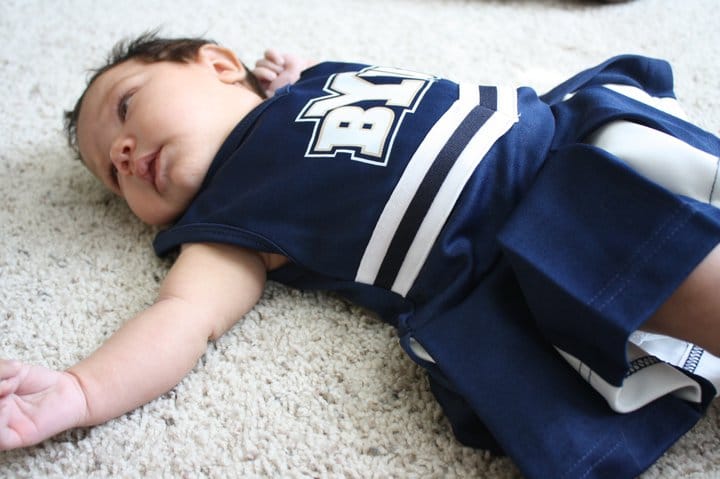 He thought for a moment.

“[Our daughter] was just born so she would have been really little. We played Washington at home,and won” He said confidently.

He was good. Almost too good.

“Are you reading your phone?” I asked him. By this time Lil’ J knew we were talking about BYU football and she was interested in this conversation. She went over to see if he had his phone in his hand and shook her head.

“It wouldn’t be fun if I was cheating!” He said.

“Ok, bonus points for guessing the score.” I egged him on. 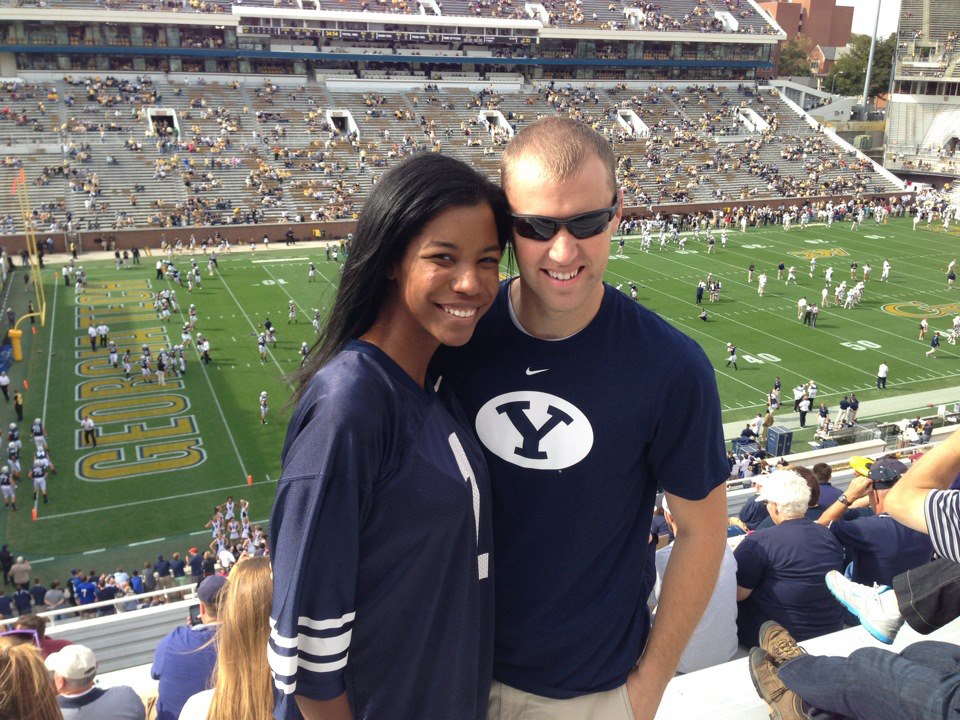 “Ok, this is seriously disturbing,” I said. “How in the world do you know all this?”

“Because I watched the game!”

“But I watched the game too and I don’t remember any of this.”

“He watches them a lot,” Lil’ J chimed in with her opinion on the matter.

“Is it because you watched the highlights?” I asked. But he insisted he doesn’t watch anything that recent. 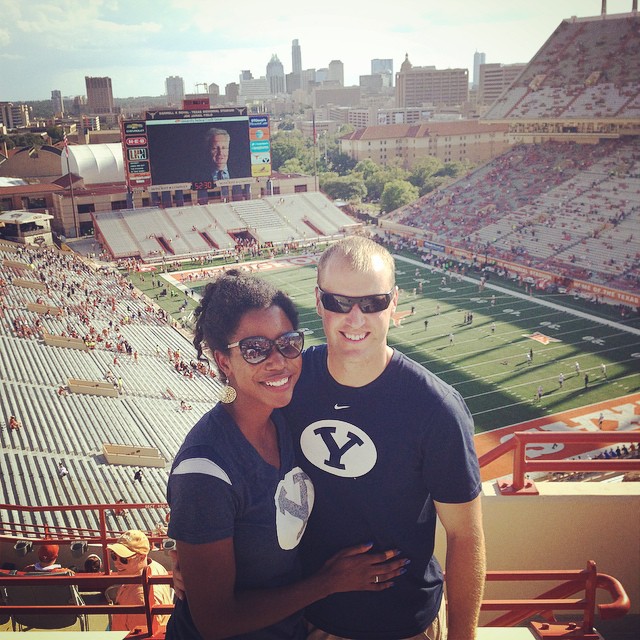 Basically I’m married to a BYU football encyclopedia. He was spatting everything from which quarterbacks were playing to who was coaching other teams in random years from 2005 to now.

It’s this passion that has already begun to infuse into our daughter. 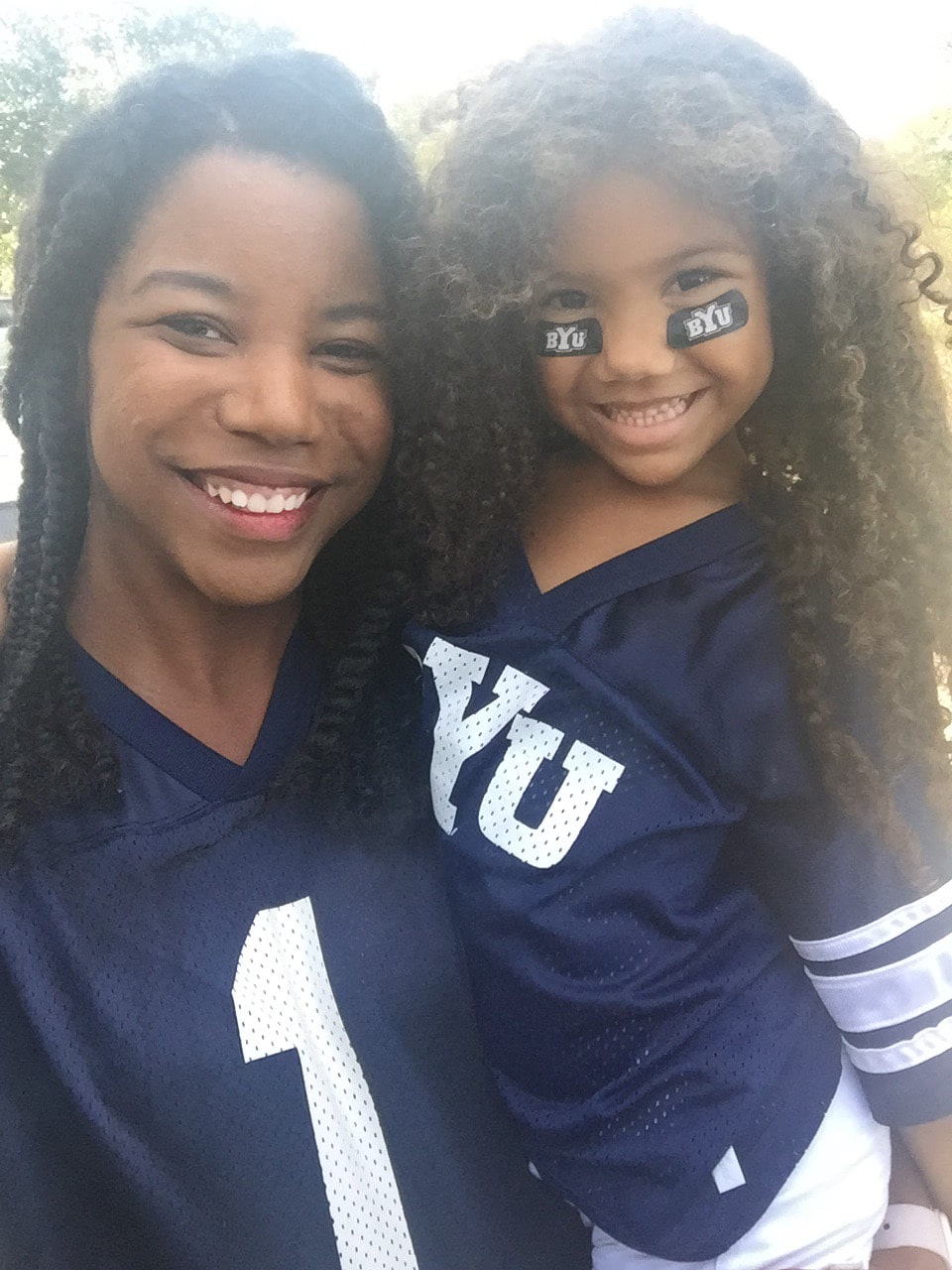 She pleaded time and time again to have a BYU Football themed birthday party this year but we persuaded her to do something more of her friends would understand.

We watch every game together as a family. She doesn’t understand the rules but she finds herself invested for a couple of reasons. One, if we win, we go out for ice cream. Two, she can’t get enough of the excited energy–Particularly the energy of her daddy during a game. 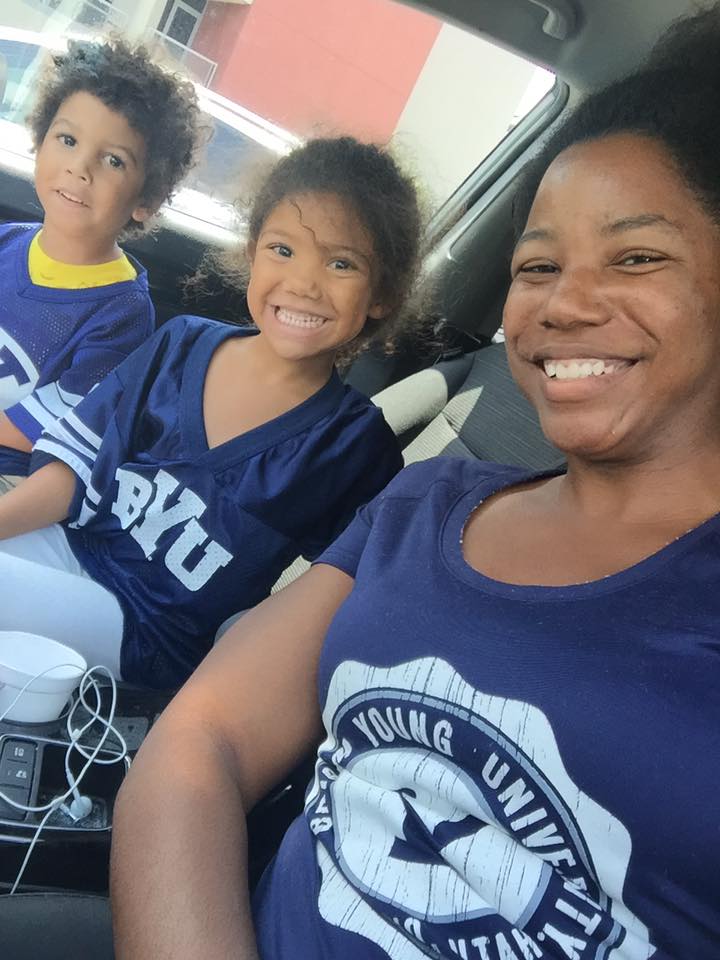 On game day there’s a lot of screaming and cheering and yelling at the TV. Our son gets a little intimidated by all of the commotion. He’ll dress up with us, even don his BYU helmet, but he tends to tell us we’re too loud when we get overly excited. 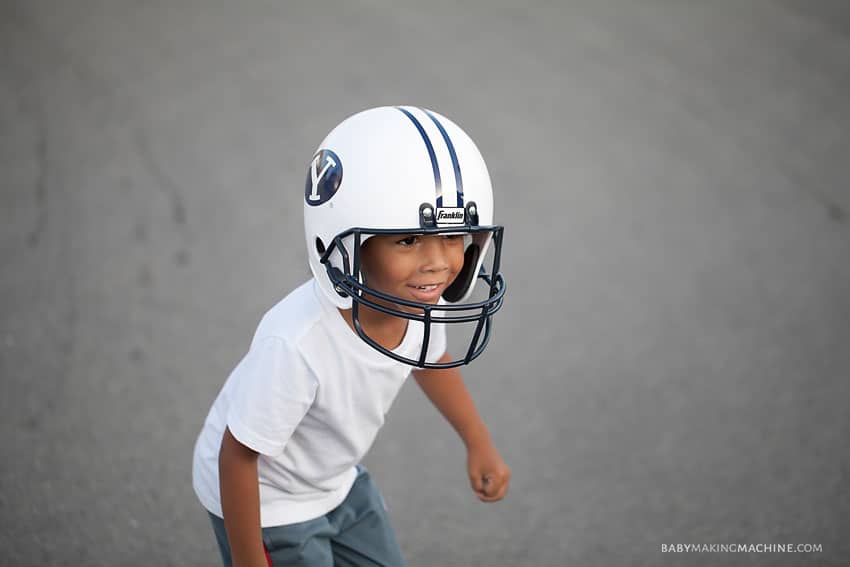 Our daughter on the other hand, lives for that. She will probably never forget the night we won a game (I can’t remember which one but I know if I asked my husband right now he’d tell me) and he ran out the back door and into the yard screaming and cheering. That has pretty much been the coolest moment of her life.

I guess it’s in her blood. And I have a feeling she’ll be reciting game stats and random facts soon enough.

During our Disney Cruise last year the announcement hit that BYU’s football coach Bronco Mendenhall was leaving to go coach at another school. My husband, and in turn, my daughter was distraught.

“But whyyyy?” She wanted to know why he would leave. With tears in her eyes she tried to negotiate. “If I finish all of my dinner will Bronco stay at BYU?”

My husband and I couldn’t contain our laughter, but we reassured her that we’d find another coach. And we did.

Coach Kalani Sitake now leads our team and Lil’ J tells anyone who will listen.

“We’re celebrating because Kalani Sitake won his first game at BYU!” She told my mom the day after the first game.

I could be wrong, but I think she loves it so much because of how happy her daddy gets about it. She feeds off that joy and excited emotion. 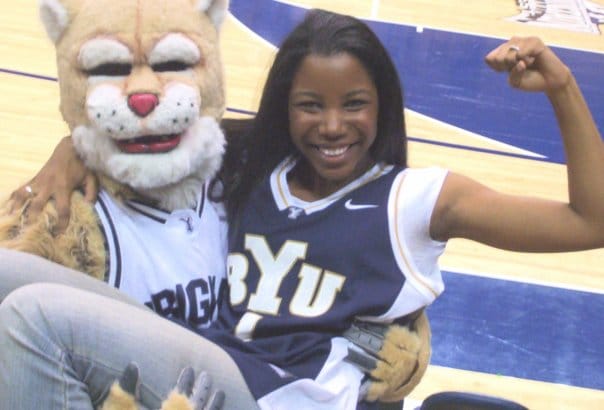 I can’t blame her. I’m not sure I would have fallen so in love with BYU sports had it not been for my husband’s passion for it, and all the fun we had going to the games when we were in college. I guess in a way our kids were doomed from birth.

Lil’ J says she wants a family birthday party with a white and blue frosted cake and BYU highlights playing in the background. Next year, if she asks again maybe we’ll give her that BYU football party she’s been asking for. Until then, go cougars!

Does your family have any team spirit?

My husband is the same way with random sports facts. Can recall the score of any Purdue football game, who was coaching, who started, the players stats. It’s insane! I can’t remember the score of the game we watched three days ago!

He’s training our ten year old daughter to be the same way. The people who sit around us at games crack up at her because she calls penalties and yells at the refs and this year she’s repeating anything he says about what the next play should be. It’s pretty funny!

Hahaha, I think our husbands could be good friends that’s so funny. It’s like they have sports photographic memory or something. Your daughter sounds awesome. She’ll be a coach in no time!

Thanks for sharing. I was a tremendous football fan before I became a dad. It was easier to watch the games of course. I’ve drifted away of the years; but occasionally try to catch a game.

What’s exciting now is that I occasional find one of my sons trying to watch a game. I think they do it because they know I like it which is very sweet. It makes me want to get back into it again; but this time with them.

Awwww. Norm that is SO SWEET! I absolutely bet they love watching knowing how happy it makes you. Try to pick it up again and invite them to watch with you! I’d love to hear how that goes!

Absolutely love this! I wasn’t in to football until my Freshmen year of college. I was in line to get tickets and they asked if for $35 bucks more we wanted to skip the line and get a free shirt and become a super fan. I was all on it and then truly became a super fan. I always say my husband’s two hobbies are BYU football and Apple products- so needless to say there is major BYU football viewing in our house.

Hahaha, I love this so much!! I love both of those things too! So awesome the tradition stuck at your house too!

May be my luck is very bad. Cause my wife didn’t like football. If I watch football with my son, she become angry. I don’t know why she is so crucial about football.

What’s exciting now could be that I occasional realize one among my brother attempting to observe a game. i believe they are doing it as a result of they grasp i favor it that is incredibly sweet. It makes ME wish to urge back to it again; however now with them.