If you’re looking for a way to watch the Star Wars Movies in order and a PDF checklist for free, you’ve come to the right place!

In case you missed it we’ve got all the Disney movie marathon checklists worked out for you. And we’ve got the Disney animated classic movies. We’ve got all the Marvel Movies in order.  Disney sequels, Pixar movies, live action remakes, and even Black History movies. Now we’re adding the Star Wars marathon checklist to our lineup. So whether you want to watch the Star Wars films in release order or a type of chronological order, we’ve got you covered with free PDFs of both. And if you want a small mobile version check my Instagram highlights for that!

If you just want the checklists fast so you can get going on binging all of the movies you can click here to download and print it off. But if you want to know how I came up with the order, and how to watch them read on!

How to Use My Movie Checklists

Unlike Marvel, which has two main ways to watch the movies: release order or chronological order, Star Wars has SO many different watch orders. My mom is a HUGE Star Wars fan, so I grew up watching the movies with her. I watched them in release order, starting with A New Hope (Episode IV), and going through the “first” trilogy. Then in 1999 we watched The Phantom Menace in theaters, followed by The Attack of the Clones and the Revenge of the Sith. Then in 2015 she and I went to see The Force Awakens in theaters followed by The Last Jedi and Rise of Skywalker.

Assuming you’re fairly new to Star Wars, or you’re trying to decide which order to watch the movies with your kids, I’m going to suggest watching it a couple different ways.

Looking at this there are two ways I’m going to throw out watching the series. The first is release order. You’re seeing it the same way the Star Wars fans did as the movies came out. But if you have little kids you’re trying to bring into the Star Wars fold, I’d suggest NOT doing it that way. Unless your kids are already used to old movies from the 70s and 80s and have a fond appreciation for them. Or they’re not used to the high tech flashy movies and video games of today. This order may quickly bore them out of the series.

It also gets a little wonky if you’re trying to follow the storyline with the release of some of the newer movies like Solo and Rogue One.

But hey, if you’ve got an adventurous group of movie-waters go for it! Here’s how to watch Star Wars in release order.

Instead of a straight chronological order, the attempt with this is to watch it in a way that’s in a type of chronological order that doesn’t start with the first movies (which are slow, and not done very well). And also doesn’t give away the spoiler of Anakin Skywalker going before you discover it with Luke. It’s not exactly in Luke’s flashback order because we squeeze the Solo movie in there too. So you get to enjoy some of the newer movies and the Vader reveal, before having a “flash back” to the young Skywalker storyline and on to the new movies where Han Solo is older. You feel me? Here’s a glance at how that order looks and summary of each movie:

Young Han Solo finds adventure when he joins forces with a gang of galactic smugglers and a 190-year-old Wookie named Chewbacca. This movie is ok to watch even if you aren’t familiar with the Star Wars series and can serve as an entry to the franchise, and a hook to get younger viewers into the series.

Rogue One: A Star Wars Series

Of all of the Star Wars remakes and stories, this is the one most seem to agree stays true to the original and fans truly appreciate. The movie leads perfectly into A New Hope.

The Imperial Forces — under orders from cruel Darth Vader hold Princess Leia hostage. Luke Skywalker and Han Solo, captain of the Millennium Falcon, work together to rescue the beautiful princess and help the Rebel Alliance.

The Empire Strikes Back

Luke travels to Dagobah in search of Yoda. Only with the Jedi master’s help will Luke survive when the dark side of the Force beckons him into the ultimate duel with Darth Vader.

Return of the Jedi

Luke Skywalker battles Jabba the Hut and Darth Vader to save his comrades in the Rebel Alliance and triumph over the Galactic Empire.

Obi-Wan Kenobi is a young apprentice Jedi knight under the tutelage of Qui-Gon Jinn. Anakin Skywalker, who will later father Luke Skywalker and become known as Darth Vader, is just a 9-year-old boy.

Attack of the Clones

Set ten years after the events of “The Phantom Menace,” the Republic continues to be mired in strife and chaos. A separatist movement encompassing hundreds of planets and powerful corporate alliances poses new threats to the galaxy that even the Jedi cannot stem.

Revenge of the Sith

It has been three years since the Clone Wars began. Jedi Master Obi-Wan Kenobi and Jedi Knight Anakin Skywalker rescue Chancellor Palpatine from General Grievous, the commander of the droid armies, but Grievous escapes. In this movie you see how Anakin turns to the dark side.

Set thirty years after Return of the Jedi, The Force Awakens follows Rey, Finn, Poe Dameron, and Han Solo’s search for Luke Skywalker and their fight in the Resistance

The Last Jedi follows Rey as she seeks the aid of Luke Skywalker, in hopes of turning the tide for the Resistance in the fight against Kylo Ren and the First Order.

The Rise of Skywalker

Finn and Poe lead the Resistance to put a stop to the First Order’s plans to form a new Empire, while Rey anticipates her inevitable confrontation with Kylo Ren.

Which is the Best Star Wars Watch Order?

In my opinion it’s just really hard to pick a perfect order to watch these movies in. Watching them straight 1-9 is another option but I didn’t list it because the Darth Vader reveal is just too good to spoil. With my kids we watched Episodes 4-6 then skipped 1-3 altogether (for now) and started Episode VII (which they enjoy much more).

How do you watch the Star Wars movies in order? Which order do you prefer? I’d love to hear other ideas. Either way, I hope these checklists help you keep track of what you’ve seen and what to watch next! 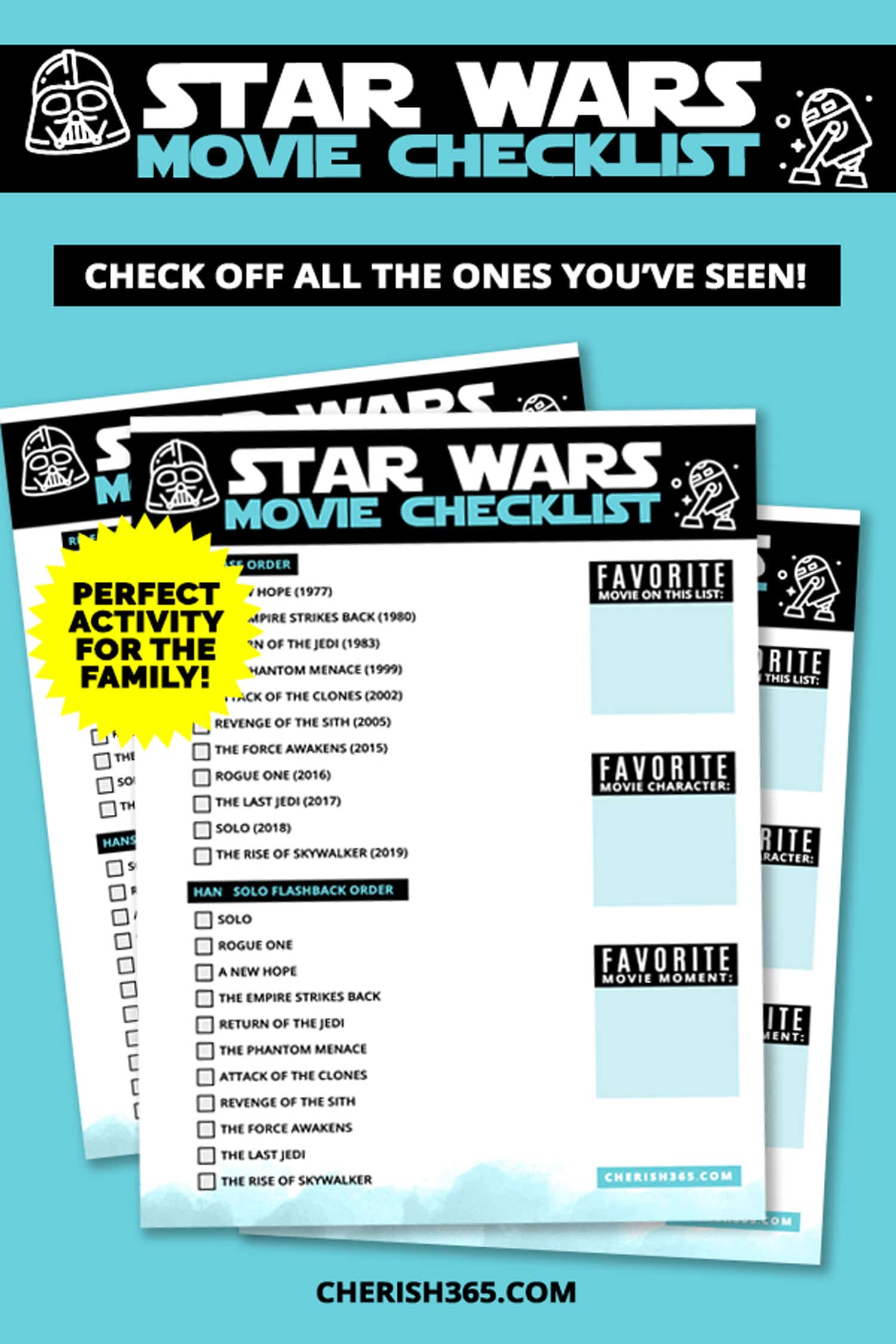