How to put out a fire: He says/ She says

A fire breaks out on the stove while I’m attempting to cook dinner.

Don’t tell him he was right. 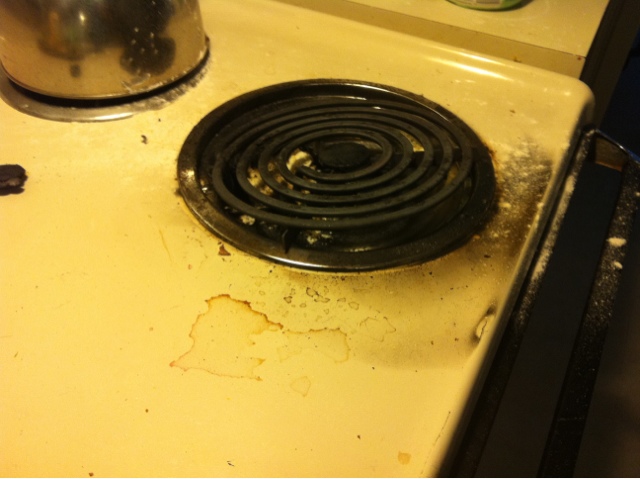 Use a large pan lid.

Turn off the burner. Put lid on fire.

As far as the extinguisher is concerned – look at the letters on the canister to show what types of fires it works for.

Then, when ready to use, think PASS.

Pull the pin (or tab) to activate the foam), Aim the nozzle, Squeeze the nozzle and finally, Sweep the extinguisher back and forth across the flames while squeezing.

I’m sure your local fire department would be happy to tell you more.

So…..if my laptop is now broken from the tea I sputtered and sprayed all over it from laughing at this post, I’m totally sending you the bill for the repairs. It’s your fault.

My first thought would be a big pan lid or a wet dishtowel depending on the size….but then again…I’d probably just scream and make John take care of it. I ought to get an extinguisher before I have kids huh…. 🙂

hahaha, i am dying over here! so funny!

i guess this remains me that we need to learn how to use an extinguisher too … what good is it if you can’t use it? haha.

LOL Um I would have used flour too! Of course it’s also a huge mess to clean up too.

I think you were shooting for salt, or baking soda. Those are the ones people throw on stove fires to kill them.

I think I heard baking soda works, not flour. I think! Luckily you had hubby there to put out the fire. hehe. Glad you guys are ok!

This is too funny. We just bought a new stove and it had this old pamphlet from the 80s with it telling you how to put out a fire. It specifically said to smoother it or put baking soda on it and never ever use flour or any liquids to try and put out the fire. As for the fire extinguisher PASS: Pull the pin, Aim at the base, Squeeze the trigger, Sweeping motion. (Thanks chemistry classes for teaching me how to use one!)

LOl. Thank goodness nobody was hurt and the fire didn’t get out of control.

This is the funniest he says/she says I have ever read. For that, I thank you!!!!

Ooops, I thought you throw flour on it too!

Baking soda works or salt- i think. But I had a similiar situation where E and I debated whether it was baking soda or powder, and he chose powder, am um yeaa… it just made tons of smoke that took forever to get out of the house…

If you do not have a kitchen fire extenguisher then it’s baking soda that puts out fires. We were in a friends house and my husband was baking something. What he didn’t know was that this person didn’t clean out the stove and the remanants caught on fire. We argued for a minute bc he wanted to use water or flour and I told him my grandma always said baking sod. Poof, fire out, but it was smokey and smelly for a while. But at least in the end the house didn’t go down. :