How Much is Too Much for a 5-Year-Old?: He Says/ She Says 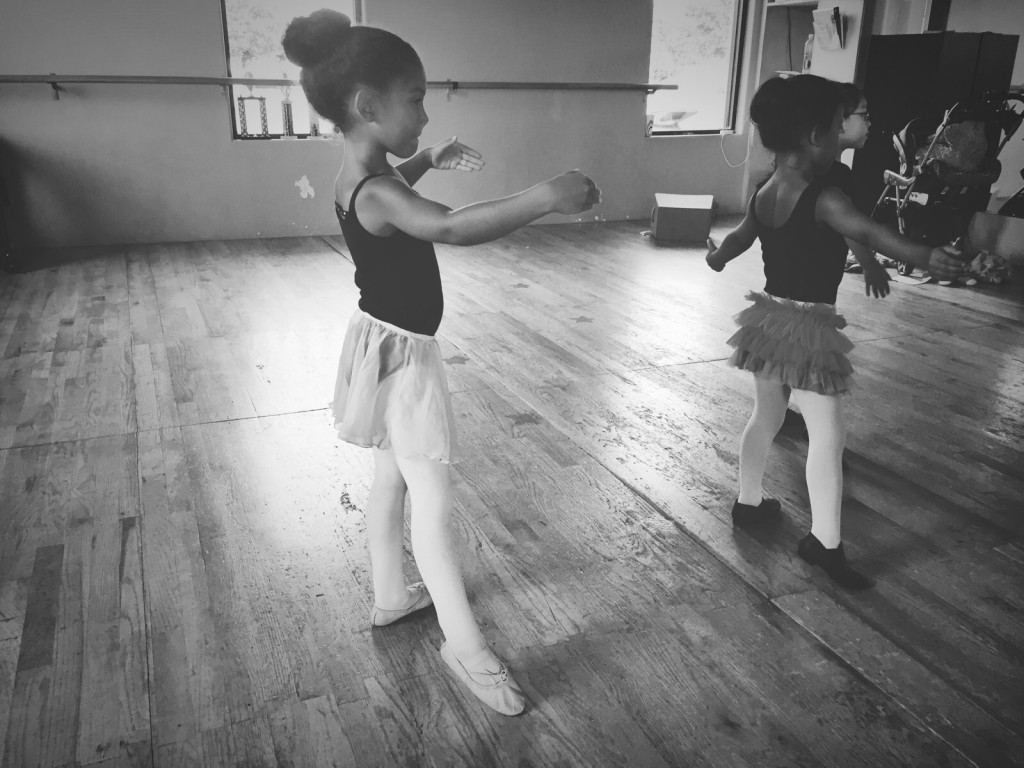 She Says: Don’t forget, she has dance tonight. It’s ballet/tap/jazz.
He Says: I thought she wasn’t doing dance anymore.
She Says: No, she’s still dancing, she also has hip hop on Thursday but–
He Says: Thursday too? That’s WAY too much!!
She Says: Yes, but I told her she may have to pick just one this year.
He Says: Yea, that’s a good idea, she’s already got a lot going on with getting used to school.
She Says: Oh yea, and girl scouts starts soon too.
He Says: …

No idea how Lil’ J is managing to do all of this with a smile on her face every morning, and not even as much of a nap on the weekends. She’s in bed by 7:30 but not asleep until after 8, and she’s wide awake at 6:30.

Right now she’s loving it all so I don’t want to pull her out of anything just yet, unless she insinuates she needs a break.

Maybe it’ll all catch up to her soon and she’ll start sleeping more? Or maybe she’s just a little too much like her mommy.

How much is too much for a 5-year-old?

Tags: he says/ she says

I think the real question is how much is too much for the parents?! 🙂 I’m exhausted with just pre-school and soccer. As long as you can handle it and she is happy, sounds good to me!

wow that sounds exhausting.. for you guys!!

My “rule” was one activity per kid (and we homeschool, so we don’t have that on our schedule). My daughter chose musical theater this year over tumbling, but since her brother is going to do tumbling, she gets to do it as well (no extra time out of my day, and it’s only a little bit more money). So my rule is more “guideline” than actual “rule”. Pretty sure they’ll both want to do baseball in the spring, too. *sigh*

I say as long as the parents are cool with it, the budget says it’s okay, the child is happy, AND the child still gets bored sometimes (<–really important, IMO!), then it works.

We have 5 kids (4 who live with us full time)- ages 5 to 14- all in school from Pre-K to freshman in high school. Our family guideline has always been one activity at a time per child. Otherwise I’d spend my whole life in the car. Right now I have one in Football, one in Girls on the Run, one in soccer, and one in dance. That’s enough to keep us running 6 days out of the week. Occasionally exceptions are made but for the most part we stick to the one activity at a time rule. My oldest plays football in the fall, basketball in the winter, baseball in the spring, and swim team in the summer. Last year he wanted to play rugby in the late winter/early Spring and we allowed him to do so on the condition his grades didn’t suffer. I’m a firm believer that kids need some activities outside of school. We have a family rule that once you start something you see it through to the end of the season, we don’t quit in the middle so the kids are very careful to pick activities that they really enjoy. And if they ever say they don’t want to try out for something or want to take a season off, that’s fine. We never push or try to change their minds.

We also have a one activity per child rule but that’s for my own sanity, I don’t want to have that much to juggle in the evenings. But with that said, 2 out of 3 of our girls dance (our 9m old is still too young ;)) and I consider “dance” to be one activity even though collectively they’re in 6 classes on various days. So yeah, I say do as much as you can handle your kid will let you know if it’s too much for them. My only rule for quitting dance is that they have to do it before I pay for the recital costumes which is generally the end of October. Once I pay for the costumes they have to stick with it because there are no refunds at that point.

She’s probably on a rush right now from all of the new exciting stuff. I say as long as she wants to do it and you both can hang in there with her then enjoy the new activities!

My 10 year old has been in dance since she was 4. This is the first year dance is on two different days. My husband has questioned the same. My response is as long as she is managing her school work and isn’t exhausted (nothing else is suffering). Dance is her “passion” and I’m not ready to make her choose. This winter basketball starts her and my middle child starts volleyball. I will be the taxi driver.

Yeah, I feel like it’s important for parents to just watch for signs and make sure they are enjoying it. It makes my heart ache to see kids being forced to do all these activities because the parents want them to do it. That’s obviously not the case here and I say, if she’s enjoying it – let her do as much as you’re willing to allow!