How Many More Firsts Do I Have?

“It worked mama!” My daughter exclaimed. “I saw a ladybug and I wished on it and my wish came true!”

She told me she wished to learn how to ride her bike that afternoon. On two wheels that is. 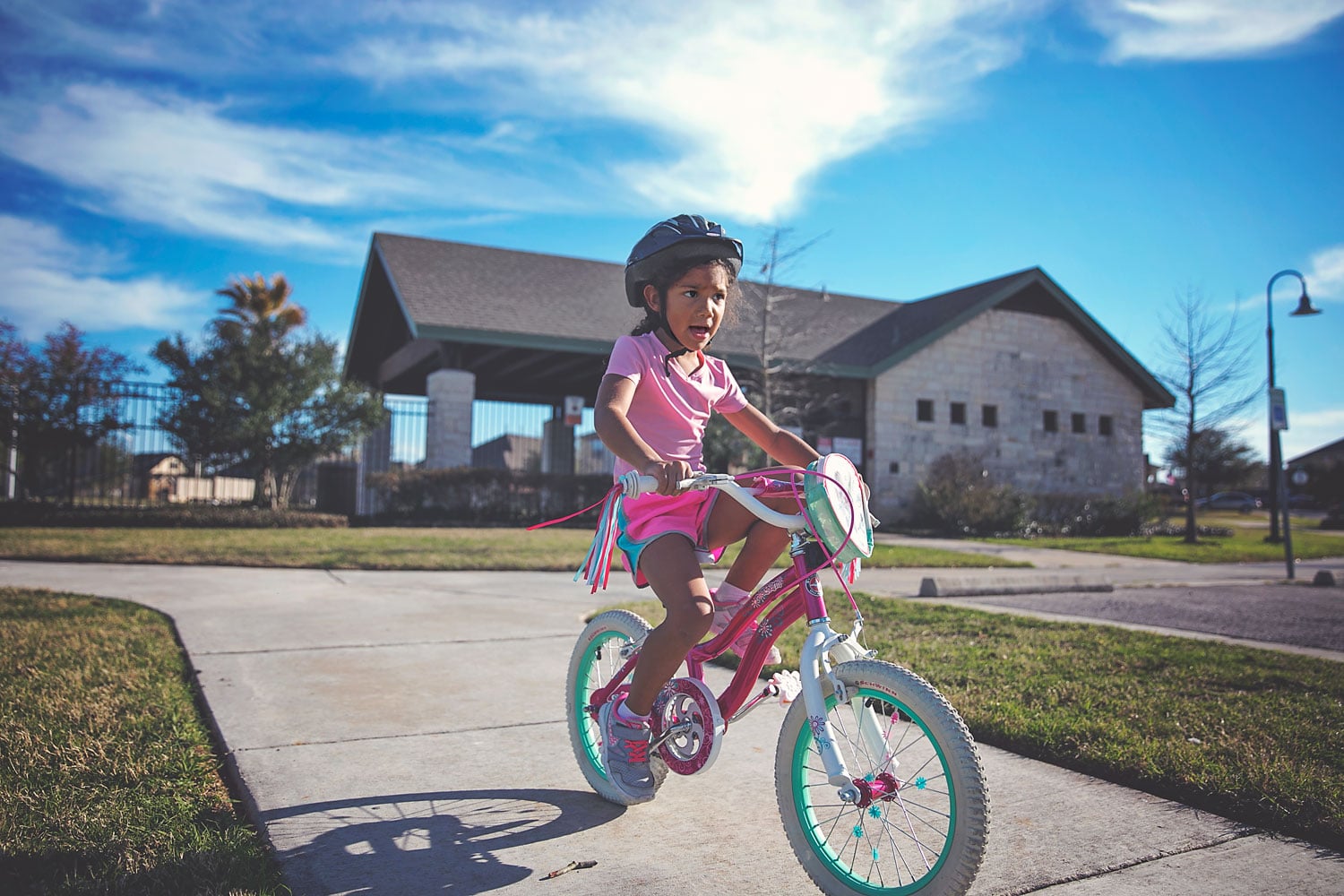 We set out to check the mail. My son asked if he could bring his bike–A balance bike. And my daughter wanted to bring hers too.

My husband took the training wheels off of it a couple of weeks ago, but they hadn’t had much time to practice together.

“Do you want to teach her?” I had asked him. “It’s sort of one of those Daddy right of passages.”

But we had a few cold days, followed by a family vacation and then he was back to work. I wasn’t sure how likely it was she’d actually master the process in a day but what the heck, it was worth a shot. Or we could at least get some practice in.

She tiptoed on her bike a half a mile to the playground. She felt discouraged on the way there because every time she tried to lift her legs and pedal she’d quickly lose her balance.

“It’s much harder to learn on this uneven sidewalk,” I told her. “Just wait until we get to the playground and have more space.”

The sidewalks have cracks, bumps, uneven areas and cars blocking the way. It was a challenging course for any rider.

Once we reached the playground her brother tossed off his helmet and ran to the slides. I asked Lil’ J if she wanted to play or keep practicing and she said she wanted to keep trying to ride her bike.

I ran down the sidewalk with her two, three, four times. Each time she went a little further. She crashed and burned a couple of times but she’d get back up, determined to try again.

Finally, after about six runs I gave her an initial push but let her take it from there. She didn’t stop. I ran behind her to the end of the sidewalk cheering her on. She pedaled backwards and came to a stop and I gave her a high five. She beamed with pride.

She did it a few more times and once she got comfortable I took out my camera to take pictures of the occasion. 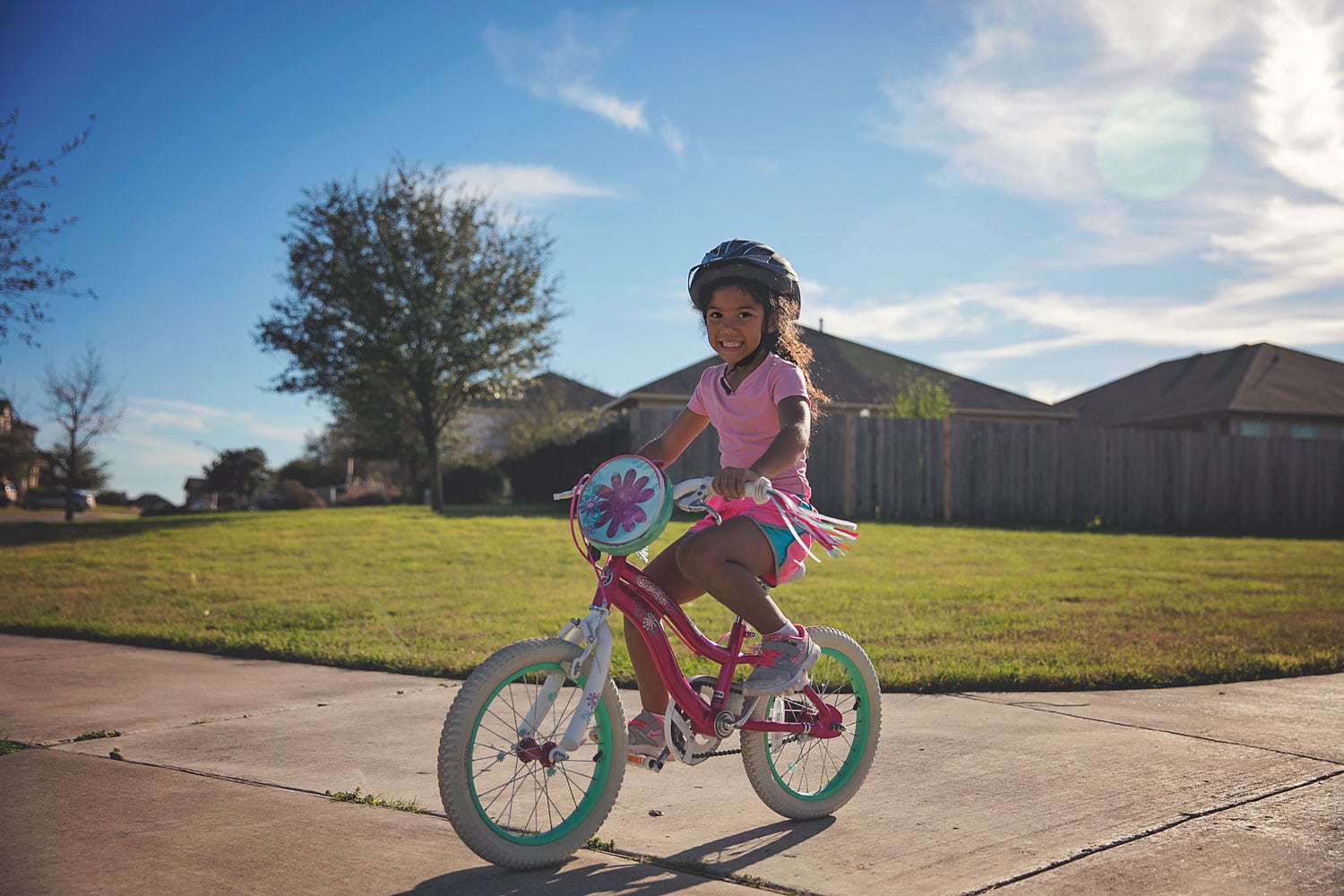 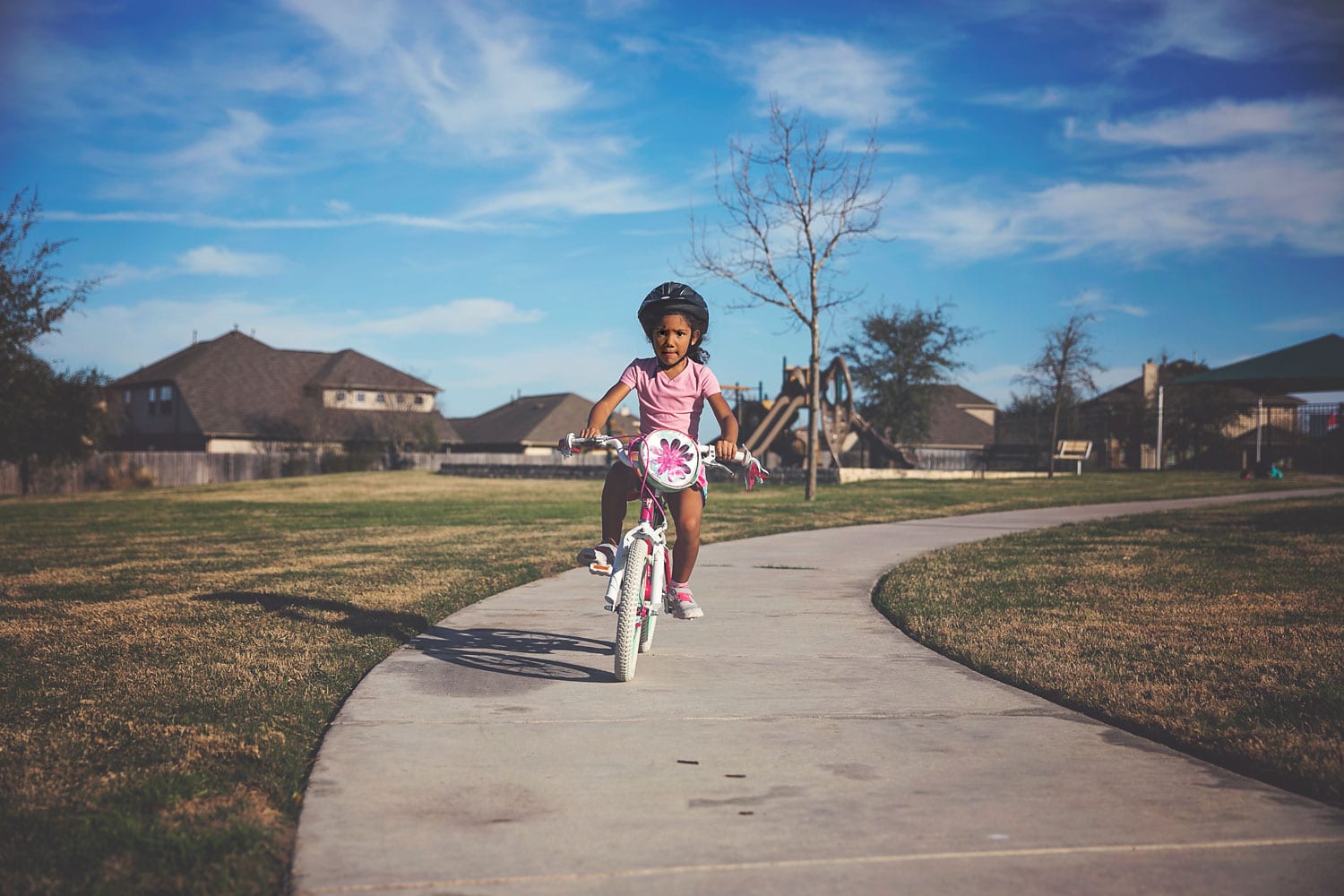 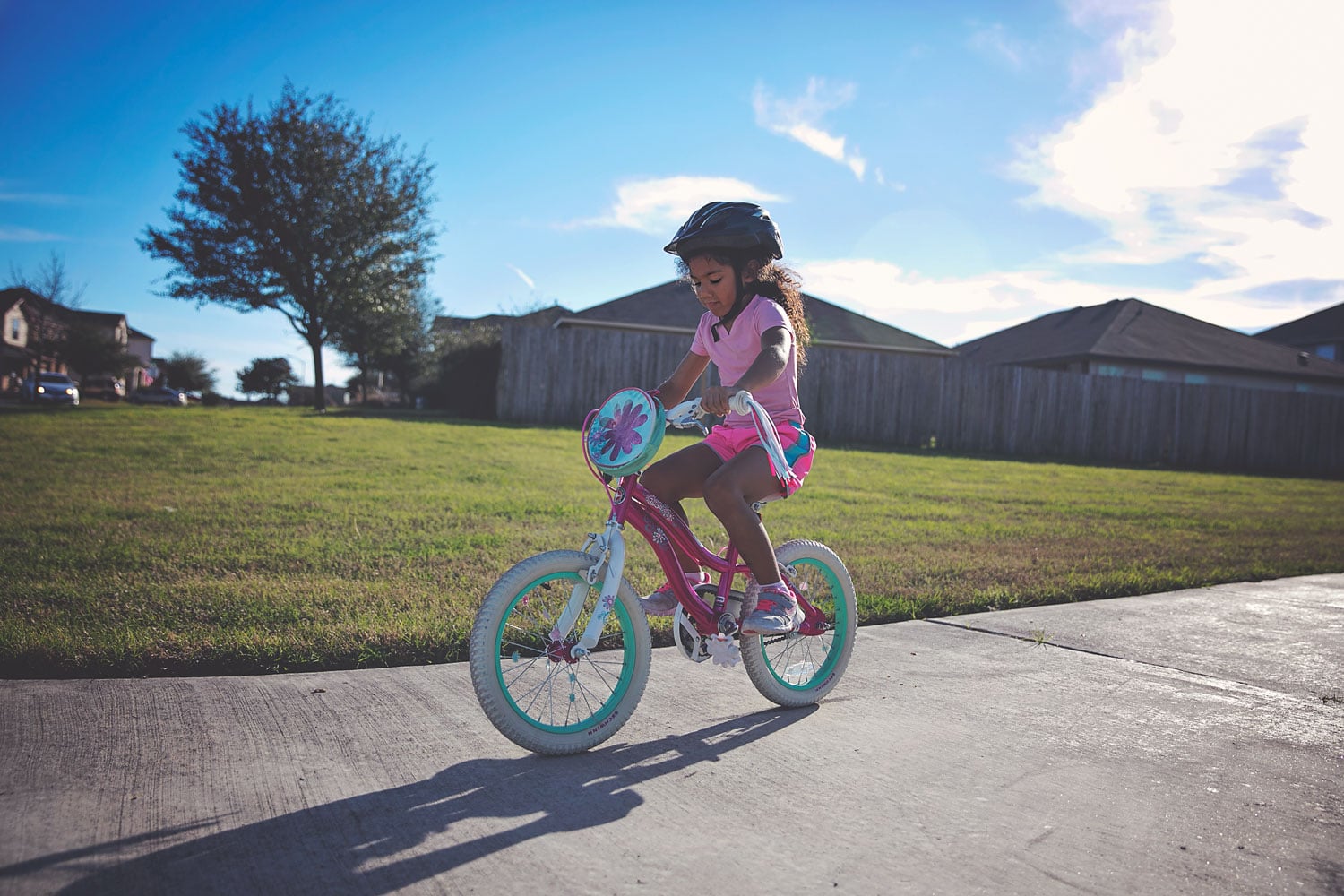 As I watched her determination and tried to capture the moment as best as I could, I noted the date–February 18th, also my brother’s birthday–My daughter learned how to ride her bike. She balanced on two wheels for the first time.

Then it struck me… Her firsts are slowing down. Her first smile, first word, first steps, first time using the potty, first day of school… They’re all behind us. How many more will we have?

So we celebrated. I told her this was a big deal in need of a treat and we went out for ice cream.

Losing her first tooth, first daddy/daughter dance, her picking up a book to read for her own leisure, first tryouts, first time driving a car… There are more to look forward to but I can sense they’re slowing down. I don’t want them to end or become less sweet.

I don’t know how many more “firsts” will have her jumping up and down with excitement or pining for ice cream. But I know I’m going to cherish each one.

Oh this post is bitter sweet to me, as a momma to four I have had that exact thought racing through my heart and mind a lot the last little while.
This year was the “first” my oldest wasn’t in the country for her Birthday so we never had a chance to celebrate with her.
I miss the first “steps, coos, smiles” but as they get older their are many more first yet to come!

I thought when my son turned 16 my days of first were over but i am learning even as they get older there are still lots more first. Like first date, first prom, first time he drives and even bigger ones like the first time he becomes a dad. There may not be those first word or steps but we still have a lot more first to look forward to.

Look at her go! She looks so proud on her bike. My son is only 5, so I’m sure we still have more “firsts” to go!

Such a true post. It made me think how many more firsts do I have with mine? It’s a tough thing to think about but beautiful to be reminded of the memories.

I think about this a lot. My baby is now four and I came to the realization when his brother was about the same age that so many firsts had passed us by, and the remaining ones would definitely come at a slower pace and possibly be less obvious. So the second time around I’ve been trying to savor them, but the truth is that we’re definitely past the age where almost every day there was something new. But everyone is right–there are so many more to come. I think we just need to watch more closely. Sometimes they’re obvious, and sometimes it’s not clear it’s a milestone until they’ve done it a few times. That first time they identify a letter or put on their shoes or zip their pants. Remembering to brush their teeth without a parent telling them to, or cleaning up their spot at the table, or hanging up their own clothes. They’re all milestones moving toward functional adulthood, but sometimes they’re just a little sneakier 🙂

I haven’t ridden a bicycle in such a long time though I used to love it when I was younger. I think the idea of riding in the street with cars fears me; especially because I am a driver. But, I remember how much fun it used to be.

What an awesome moment! It’s great that you’re able to appreciate all of these big milestones. It’s awesome seeing the kids grow and learn.

What a special moment. I think about this all the time too. It’s such a hard reminder that they are growing up and they don’t stay little for long.

What a sweet moment! It brings back so many great memories of when my kids were little. Just wait until you drive in a car with them for the first time!

Firsts are absolutely wonderful. I have three daughters so I totally relate to all that you shared. As they get older, the firsts still come and they can still bring tears of joy to your eyes. Enjoy every moment!

What a great post. It is so important to celebrate all the special firsts with our kids. I have so many great memories of all these special events.

You can see how thrilled she is with her accomplishment in her smile! Way to go! All the “firsts” are truly such a big deal and should be celebrated in some way or another whether big ways or small!

Aww what a sweet post and great those are great pics! I can totally relate, I’m counting all my little ones first accomplishments and trying to soak them up as much as I can.

Aw what an awesome moment! I cannot wait to experience all of the “first moments” to come while my daughter grows and learns. I’m enjoying every second.

I do miss some of those firsts, but with boys at 18 and 15 and a daughter 8 there are still many more to come and tears from me (when they aren’t looking!). First day they can style their own hair, first time to shave, first time they can make dinner for everyone without your help, first time you feel comfortable letting them have a “big kid” privilege and they follow all the rules, first day of middle school (lockers, and changing classes), first co-ed dance, first day of high school, first time to make a team with real try-outs, first time you let your child drive away alone in a car (TEARS!). First college visit and first college acceptance letter. My 18 year old without any prompting from dad, went to the store and bought me flowers for my birthday, first time (I choked up because I totally didn’t expect it)! Thanks for helping me to remember some of those firsts as I recounted them above!