Honey, I Shrunk the Kids!: A Guide to Taking Photos That Will Blow Your Mind

You deserve to have great photos to look back on and cherish as your family grows up. I’m teaming up with Canon again to help you shoot for greatness and learn how to take some awesome shots for your family.

I’ve always adored illusion shows and things that really push your mind to see things you’re not really seeing. By that same account I love photos that do the same thing. I’d never played around with it that much when photographing my own kids, but I decided to change that this month and see what kind of photos we could take together.

There are a few ways I’ve had fun playing with these photos, one deals with distance and depth, another has to do with how you flip the photo after it’s taken, and the last deals with shooting from above. All of these techniques will help you create some fun shots you’ll be smiling at for years.

Here’s how it went for us, and tips for recreating each one. I used the EOS Canon Rebel T7i for all of the photos you’re about to see. A great DSLR for beginners! 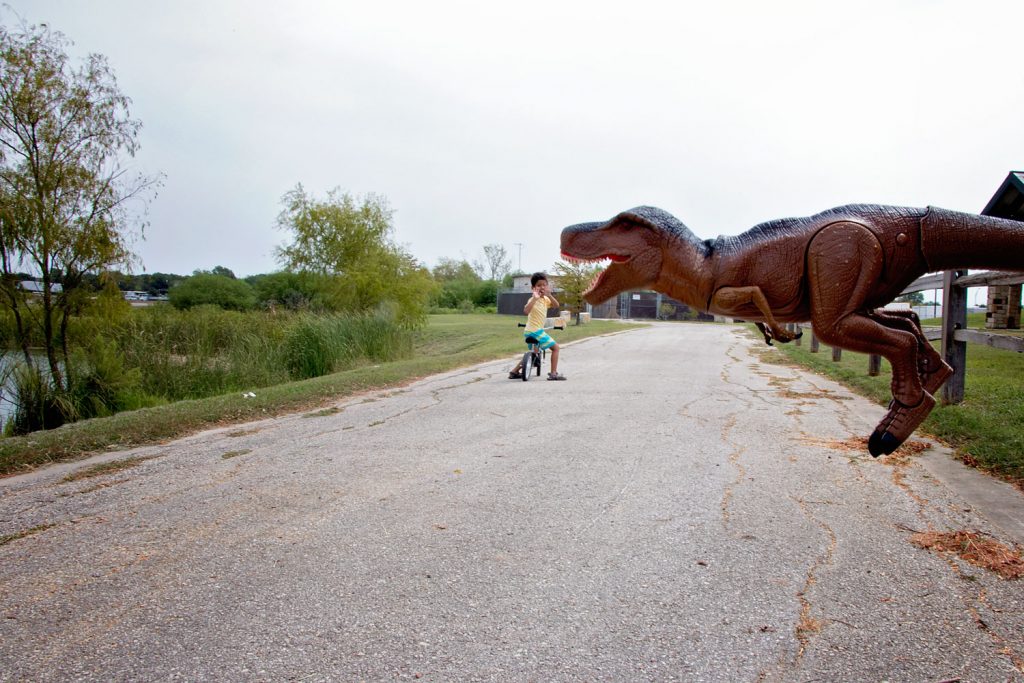 One of our favorites techniques to play with was depth.

I took the kids out to a field in our neighborhood with a handful of toys and things and we ran around trying to position them in the right spot to make things appear larger than life, or make them appear shrunken.

My son always has one of two things in his hands. Either a T-Rex dinosaur, or a Lightning McQueen toy of some sort. Our first attempt at these forced perspective photos was setting my son up to run away from a T-Rex.

Step 1: Position your child a distance away from the toy, and the toy closer to your camera.

Step 2: Make sure your f-stop is as high as it goes (mine was f22) and your lens is zoomed out as far as it goes. This is the opposite of what I usually do, but it gives you deeper depth of field, which you want for these photos.

Step 2: Kneel down at an angle so the ground is at the bottom of the frame.

Step 3: Make sure both of your subjects feet are close to the same horizontal plane. The first time we tried this the dinosaur looked like it was floating because we weren’t holding him low enough.

Step 4: Kids love this part! Get your child to scream and raise his/her hands in the direction of the dinosaur. They won’t have any idea of how it looks because the dinosaur isn’t near them, but you can bring up the digital preview on your LCD and show them the end result. (They may even be more cooperative after that since they’ll see what you’re trying to do). 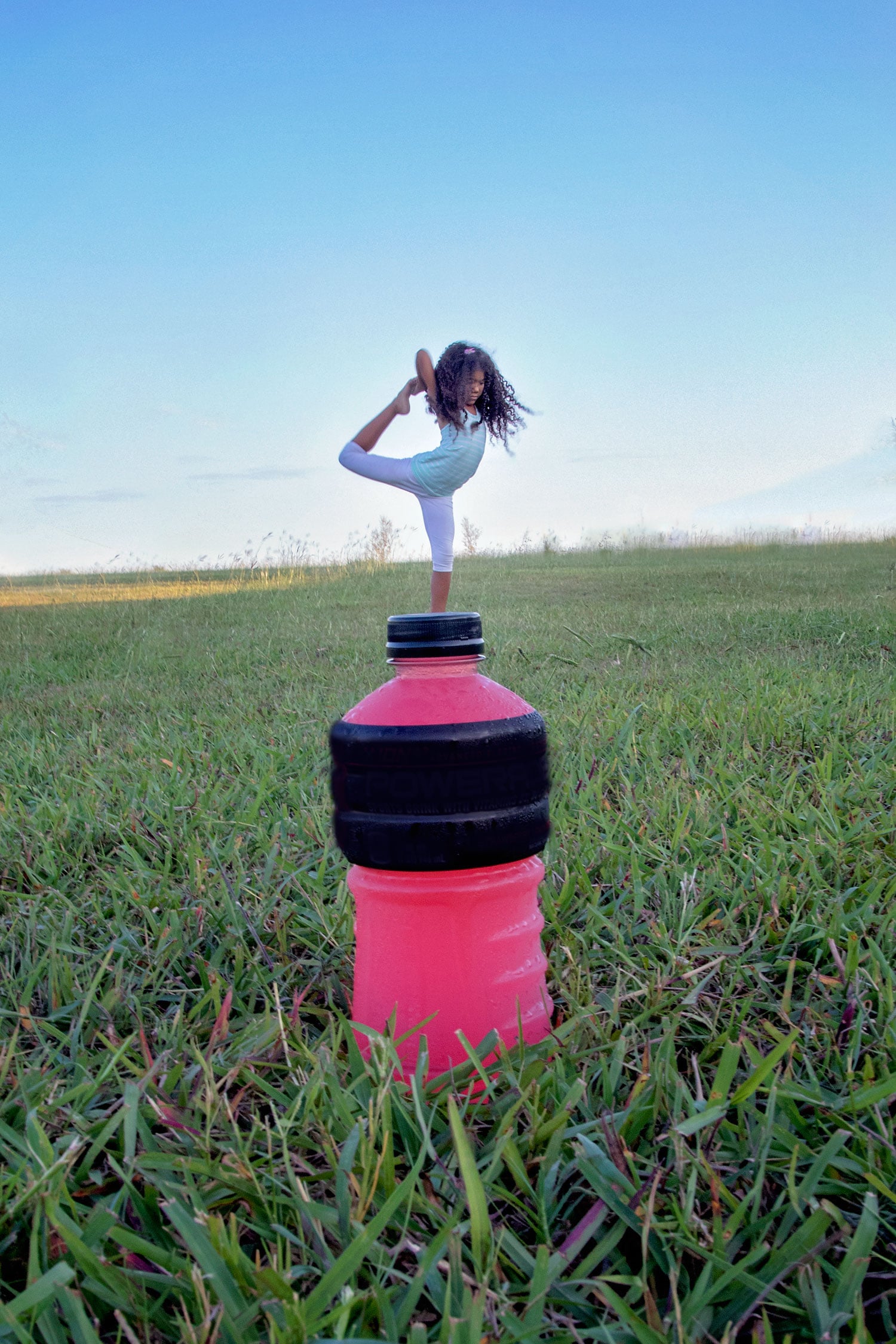 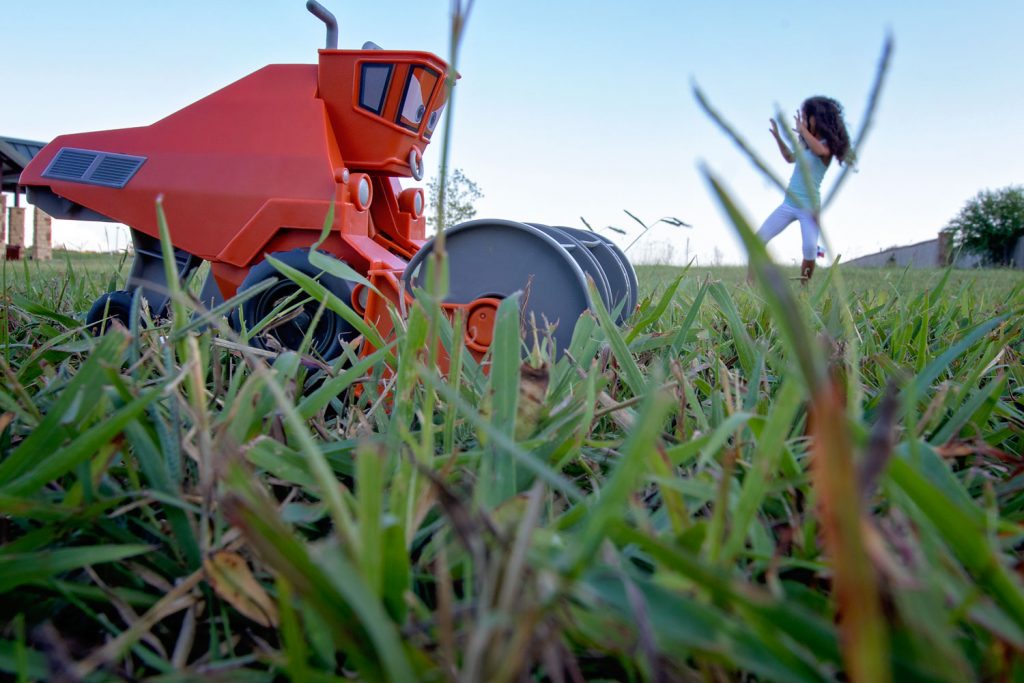 This was one of my favorite to play with because it was taking things that ordinarily look small and making them look huge, which in turn, make my kids look like I’d shrunk them. It’s the same steps as the first except I got down even lower and into the grass to make her seem like she was the same size. It can be hard to do this just looking through the viewfinder, so I pulled out the articulated LCD screen and switched my camera to live-mode so I could see exactly how the photo was going to look once I snapped it. I just touched the screen to focus and it automatically snapped the photo for me.

A Window of Water 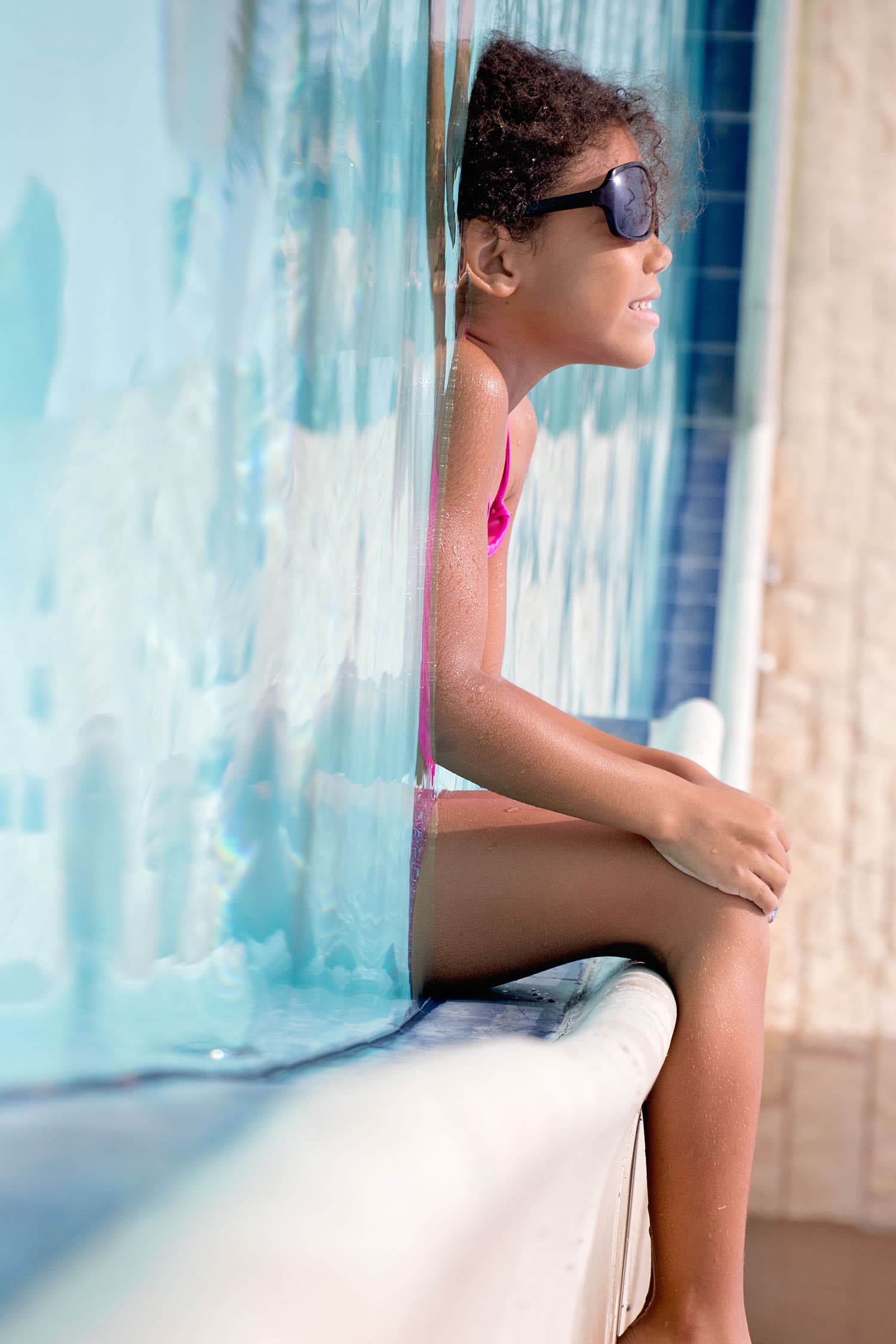 This was one of my favorite illusions to capture. Make it look like your child is coming out of a wall of water.

Step 1: Stand at the edge of the swimming pool, or even in the pool of it’s shallow enough. Ours is only 3ft so it was perfect, but I still took this from laying on the side of the pool.

Step 3: Take a horizontal photo of your child laying in the pool with their legs sticking out. Try to get as much water in the photo as you can.

It can take some practice to get it right. I took dozens on photos before I got one I liked. This would work great at a large pool where there aren’t a lot of people in the background and the pool and water stretches all the way off the picture. I call this a “window of water” since you can see the end but it would look more like a cool wall of water if your pool is larger.

In the palm of her hand 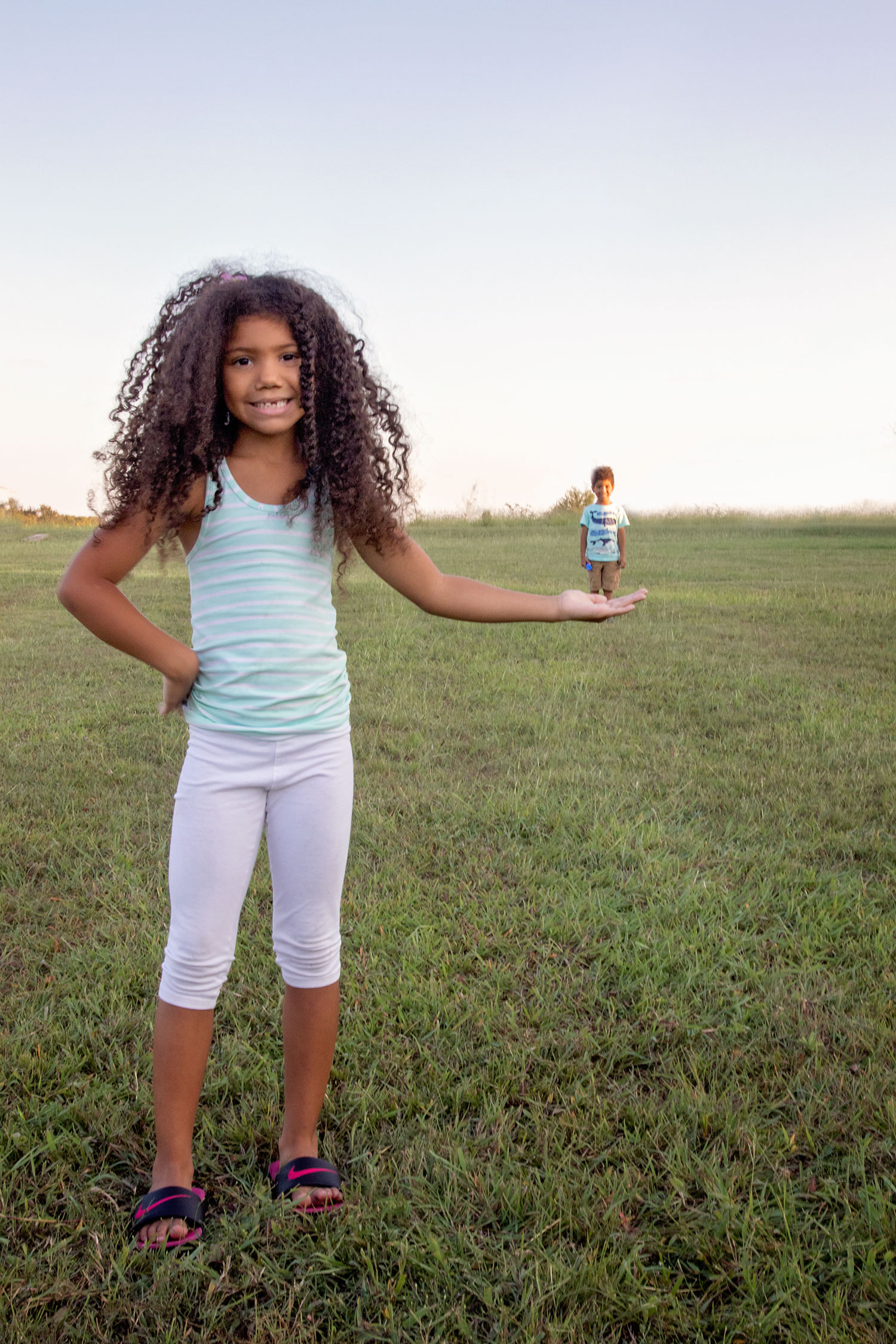 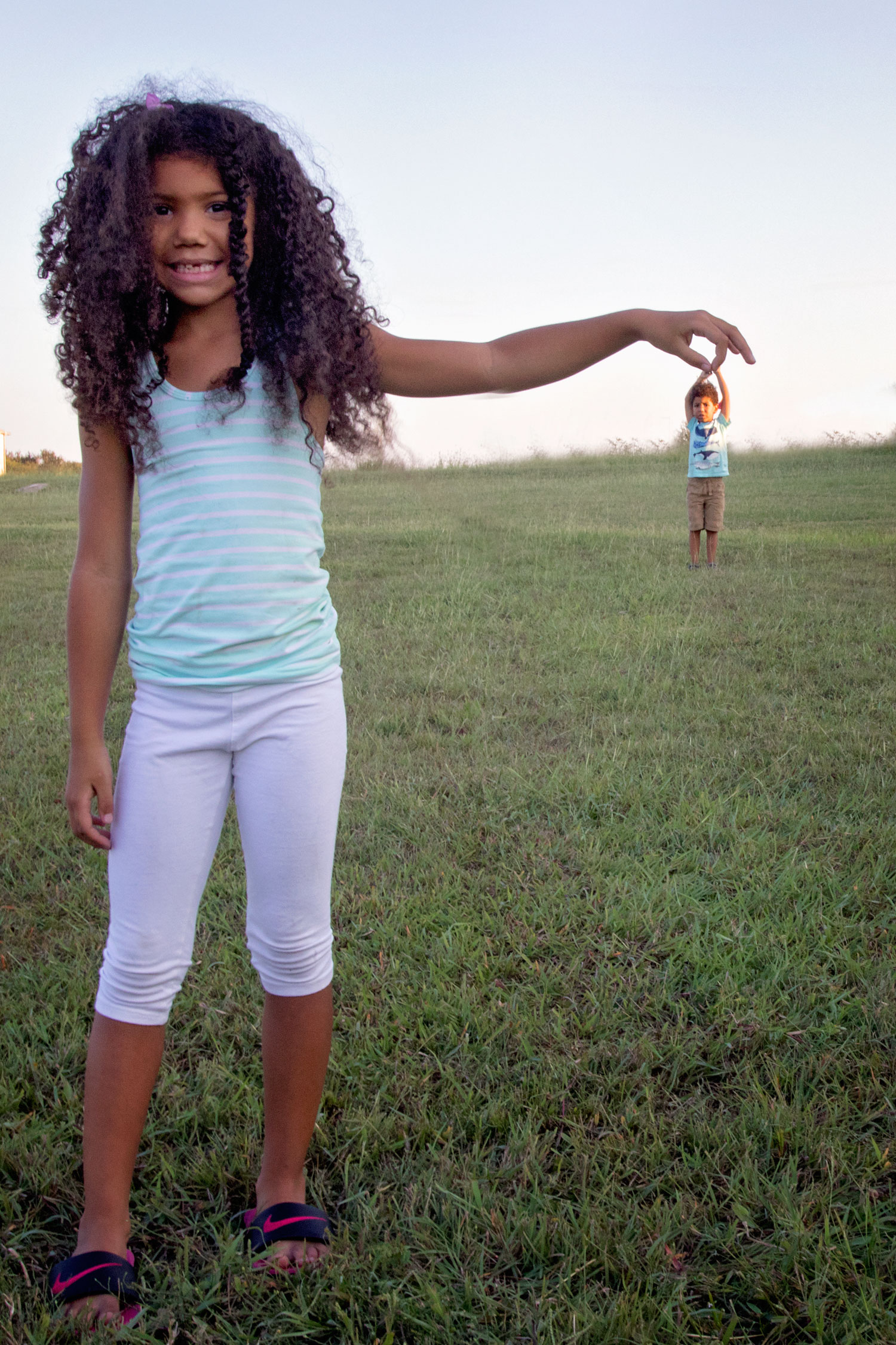 These were some of my favorite photos to take because it included both of my children and you can really have fun capturing their personalities.

Step 1: Find an open area where there are less objects to distract from the illusion. A field works great but you could also do this in a deserted parking lot, in an open lot of snow, the dessert… You get the idea.

Step 2: Make sure your settings are where you want them to be including a high f-stop for a sharper photo. My settings for this photo were f/22, ISO 400,  and shutter speed 1/30. I’ll tell you right now that I could have easily bumped up my ISO to 800+ and raised my shutter speed so that’s an option too. The main thing is to have a high f-stop to have a deeper depth of field or else one of your children will be in focus and the other won’t.

Step 3: Position your children so that one is closer to you and the other is 10-20 yards back. The further back they go the smaller they’ll be, so keep that in mind.

Step 4: Have the child closest to you hold out their hand and help guide them to where to stop. There was a lot of “a little more, ok there, STOPs!” with us. You have a little control too by moving your position around so your child doesn’t have to do as much of the moving.

Step 5: Have each of your kids get in on the action by making faces, moving their arms, screaming, whathaveyou. I didn’t think my son would cooperate but he was really good at imitating the positions I’d do. So when I asked him to clap his hands together over his head, my daughter was able to “pinch” his hands as if she was holding him by the hands.

Up Up and Away! 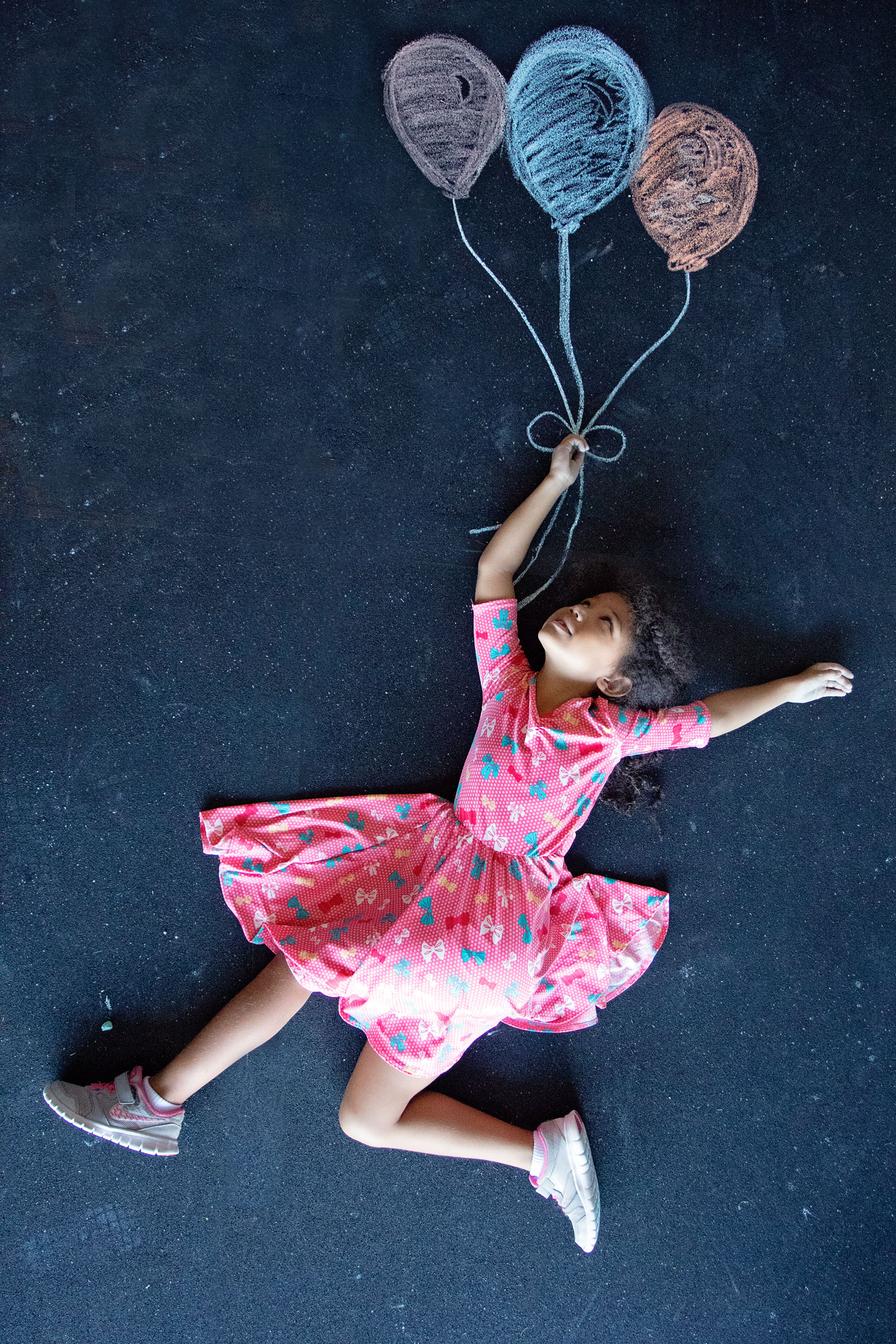 This was one of my favorite shots because it was relatively easy to set up and it gives a real dreamy-like photo.

Step 1: Draw balloons with chalk on the ground. Look for areas on the ground where there is a lot of flat open space around where you’ll take your photo. You can also use real balloons (that are not blown up with helium).

Step 2: Have your child lay down and hang on to the strings. Position their body and clothes in a way that makes it seem like they’re floating.

Step 3: Stand directly over your child to snap the photo. At first I was using a ladder but since I was using a wide-angle lens it wasn’t necessary. When I stepped down and over her, I switched to live-view mode. I stretched my arms over her, seeing how the photo was angled watching my LCD then snapped the photo. Leave room below their feet to make them appear to be floating. 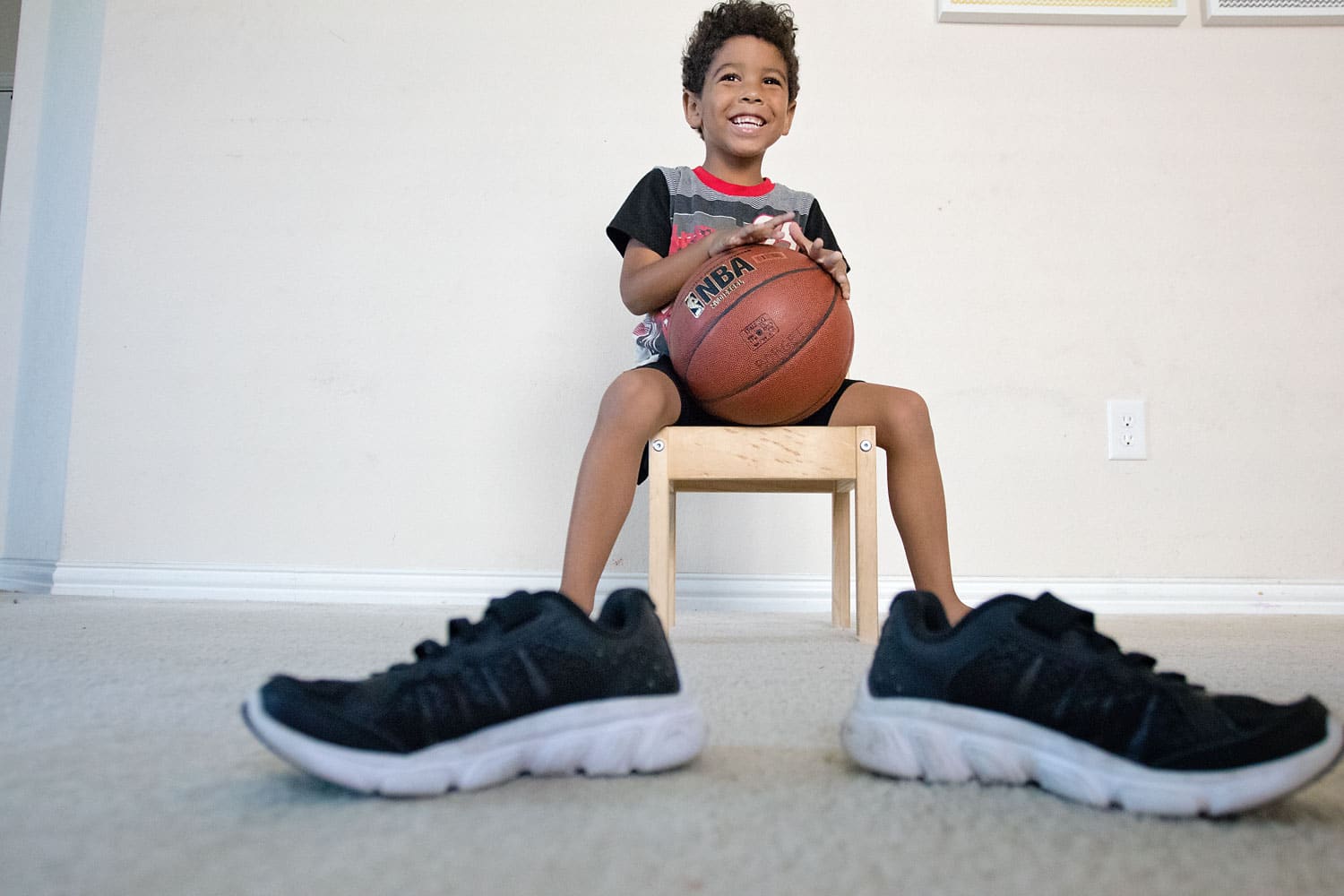 An easy photo you can take inside making your child’s feet appear larger than life.

Step 1: Have your child sit in chair low enough so their feet can touch the ground.

Step 2: Put their shoes closer to you and line up the openings to where his legs go into the shoes. Focus and snap! 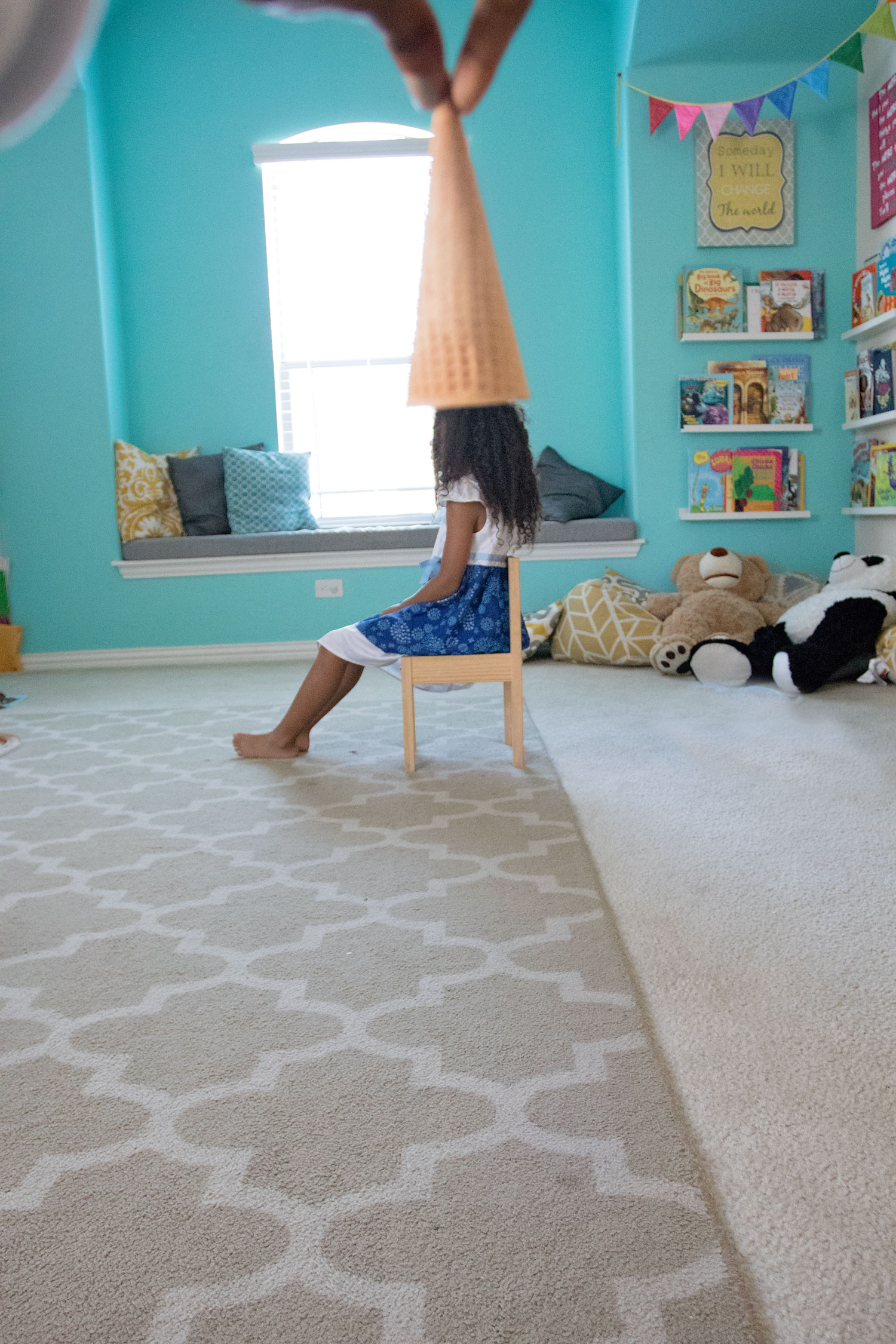 Note: You can use other objects around the house and play with them the same way like with this ice cream cone as a dunce cap. For more of my photos I’m using a large f-stop so there’s deeper depth of field but indoors you may have to open your aperture more to allow for more light. The object or subject you are not focusing on will be more out of focus.

Ice cream in the sky

There’s nothing like a child’s imagination. Fluffy clouds can become steam from a tea pot, flying hippos, or scoops of ice cream. 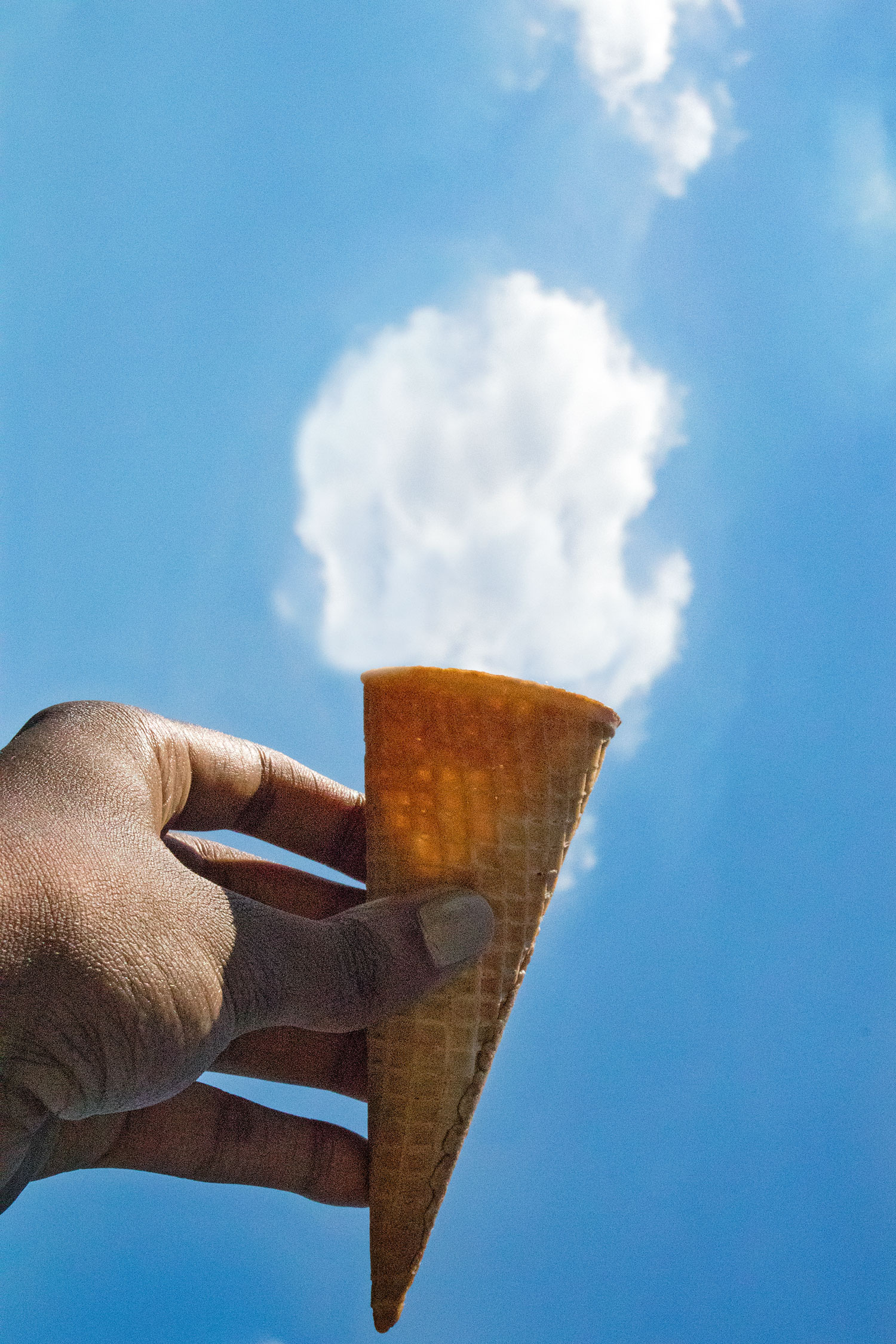 Tip 1: Perfect on a partly-cloudy day where there are lots of big puffy clouds in the sky but not so many to where you can’t see any blue sky.

Tip 2: Grab your favorite dessert cone and position your little one’s hands around the edges so you can see as much of the cone as possible. Have her stretch her arm out as much as possible and hold up the cone under the cloud. It’s ok if they are a little off in positioning because you should be able to reposition yourself and your camera to make them look connected.

Tip 3: I like to use live-view mode so I don’t have to have my face locked to the viewfinder. I have more freedom to back up and position my arms more freely.

Tip 4: Leave some negative space around the “ice cream” to allow your audience to see more of the picture and put context to the perspective.

Tip 5: Go inside and get yourself a real scoop of ice cream after cause the pictures can really work up an appetite.

The first time we tried this the clouds were pretty puny that day. In defeat we were going to go inside to try again later but as we turned we saw the huge water tower just behind our house that looked like a deliciously round ball to top the cone. 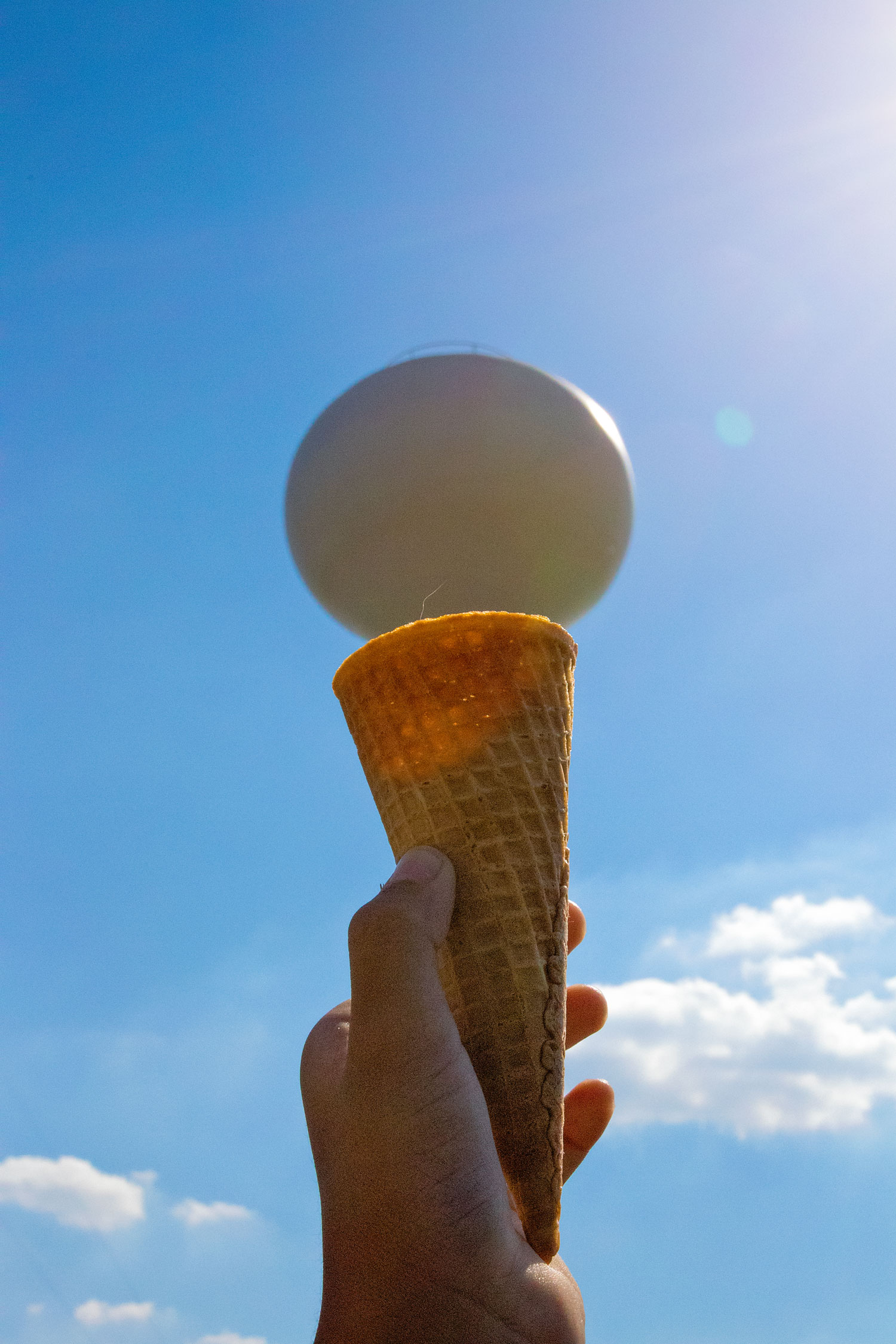 As you set out to try some of these mind-bending photos with your kids, stay alert to fun photo-opportunities around you. And most importantly, get creative and have fun. And there you have it! For more details on how to take some of these creative photos yourself head over to Canon’s Shoot for Greatness page.

Which one will you try first?

From birthdays to family vacations, to holidays and more, I’ve teamed up with Canon again this year to share how we capture the moments we cherish most. I’m also dishing out tips to help you better photograph your special moments with your family. Shout out to my favorite camera brand for sponsoring this series.

Thank you for sharing! I love these ideas! There will be many drawings to try with the 5th one.

Yea! You really could go wild with these! Have fun and be sure to share with me if you take some!

Absolutely love these – what great photography ideas, and so fun to do with kids. Thanks for sharing.

So glad you enjoyed them, thanks Carmen!

These were all great! Thanks for the tips.

Thank you Denise! Glad you enjoyed them!

So great!! Thank for sharing 🙂

I love those photos!

Thank you! I hope you give them a try!