I looked at my kids bundled up in new coats bigger than any they’d ever worn before. Wearing boots thicker than ever before, and gloves, for the first time in their lives.

Their faces showed a mix of excitement, confusion and hesitation. They were standing in a pile of cold white stuff with more of it floating down from the sky. My kids were experiencing snow for the first time. 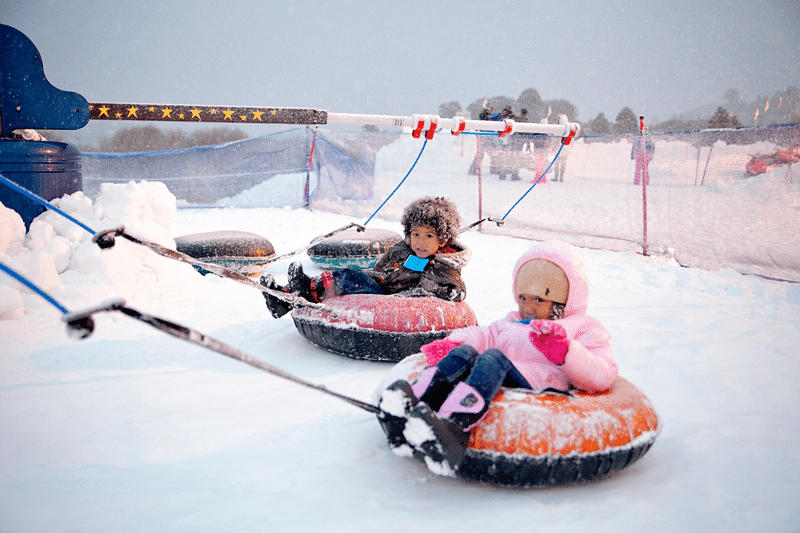 Growing up in Atlanta I saw snow from time to time. Oh we loved snow days. We’d wake up, look out the window and see our yard covered in white. School was canceled and we had a day or two if we were lucky, to attempt to make a snowman.

My sister and I bundled up from head to toe. I distinctly remember my mom putting plastic bags over our hands before the mittens went over top. Looking back, I’m not sure how wise that was but it worked! Kept our hands dry.

Fast forward to college. For years, I dreamed of attending BYU and planned on studying broadcast journalism. What I didn’t plan for was the brutal winters. Snow, snow and more snow. It seemed never-ending. 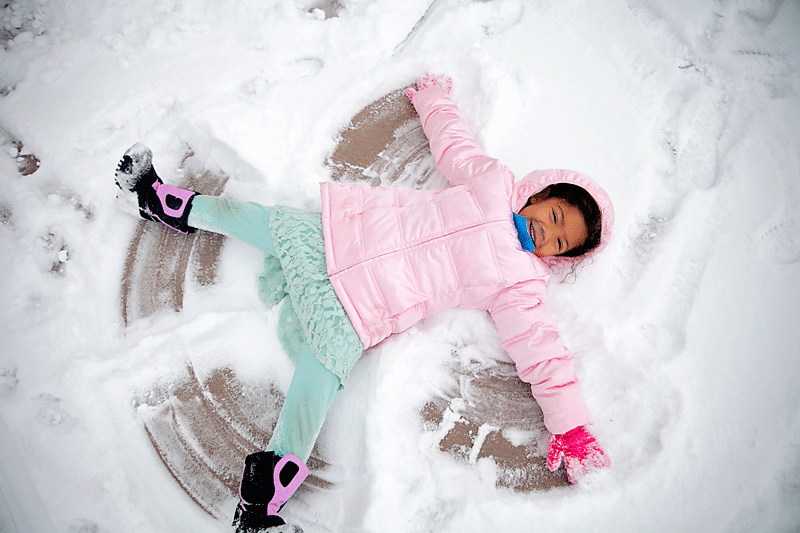 My husband and I met in Utah, but decided we’d try to move away to someplace warm as soon as we could.

After graduation, before we knew it we were packing our bags and heading back south to Austin, and there we’ve been ever since.

We’ve lived in Austin for seven years, and the handful of times we’d visited Utah with the kids, it was always in the summer. Every year our daughter would get excited, but then let down because there was no snow. We had to explain that the snow comes in the winter.

This year we decided we’d take a trip to Utah for Thanksgiving. And maybe we’d even see snow! When we arrived we saw snow on the mountains, but not the ground near my in-law’s place. I didn’t want to give up. My one big hope was to take my kids sledding, or at least to a place where they could finally experience snow. 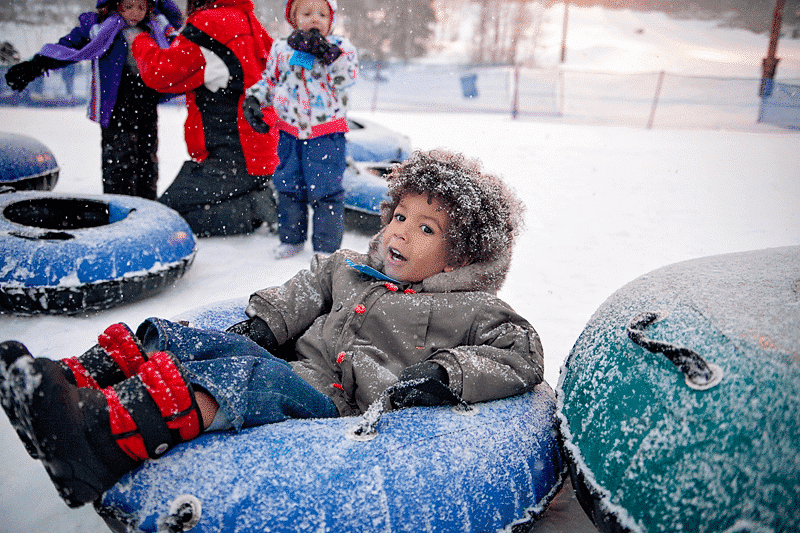 Luckily we discovered a park in the hills of Park City with snow machines. They’d been building tubing lanes for weeks and opening the day after we arrived. This was our chance!

One mini shopping spree later, we were geared up with enough clothes to stay warm. We didn’t go all out with the snow pants (I figured that would be a waste for a one-time wear), but we got some secondhand coats and boots. I had to persuade Lil’ J out of layers of dresses into layers of pants. She didn’t want to wear jeans because then “everyone won’t think I’m beautiful.” Goodness.

We stood at the base of the hill, both of my kids giving me anxious looks. I asked if they wanted to go down the hill.

My son was all for it. My daughter, hesitated, but joined us at the top. 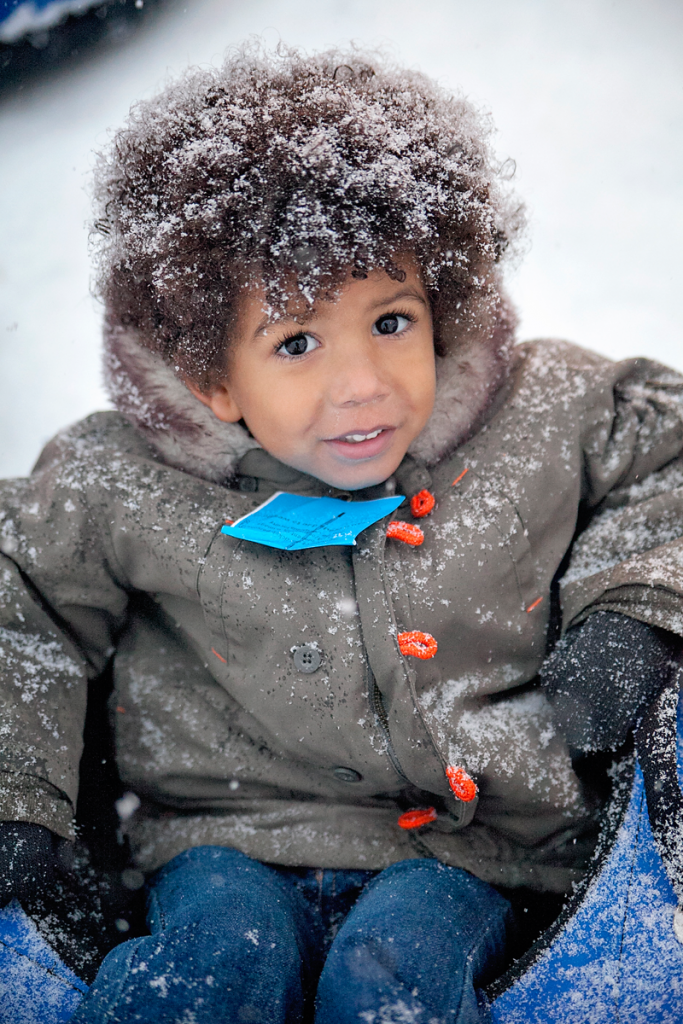 “Choo choo!” My train-loving toddler cheered as we rode up the moving ramp. Snow filled his fro because he refused to wear a hat.

We tied our tubes together and got a push down the hill. My daughter’s eyes widened with fear, then transformed to delight.

They both filled the air with laughter.

“AGAIN!” They yelled when we reached the bottom.

My son’s shivering didn’t stop him from wanting to stay in the snow, slide around and go down the hill again and again.

When it was time to go my son left with tears in his eyes; not from the cold, but from sadness for leaving all of the fun.

“It’s so COLD!” My daughter confessed as we were leaving.

“But worth it right?” I asked her.

She looked up at me with a big grin and nodded. “It’s worth it.”

I learned a few things from this experience about getting ready for heading out in the snow:

1. Bundle up in layers, but don’t overdo it. You want to make sure they can still freely move.
2. Remember the heads fingers and toes. Scarves, mittens, boots and beanies will do the
trick.
3. Keep an eye on the temperature. Kids get cold faster than adults but sometimes are having too much fun to want to stop. Take breaks and change out their wet clothes for warm ones when necessary.

This is so precious! I remember when I saw snow for the first time, I was so excited!!

That is so adorable! Kids don’t mind the snow, it’s fun and fluffy! My kids can’t wait for the first snow, they have their shovels and sleds ready to go!

This is soooo adorable! I don’t like the snow (grew up with harsh mid-western winters) but I have to remember kids don’t feel the same way. This looks like it was tons of fun! Let me go find some snow boots for my little one. #BLMgirl

Oh what fun!!! Even I could sit in a tube and go down the hill!! Well technically I could do adaptive skiing too but NO Thanks!! hheheh.

You captured this #first so beautifully!

These photos are absolutely precious! I am glad that they enjoyed the snow! My kids actually miss the snow since we lived up north for a long time before moving to Florida. I don’t miss it like they do though! 🙂

What a fun day out in the snow! I had only a very few snow days when I was a kid! Great tips!

What a great post. I love seeing little ones enjoying snow for the first time. I learned many years ago to layer and said it so many times to my daughter when she was growing up. Now she is 24 and will tell me she is putting on her layers! Such sweet children.

Oh they look like they are having so much fun!!! We had one big snow here in Atlanta a few years ago and Pookah loved it. But I can’t stand the stuff anymore LOL. I keep looking to move somewhere warmer!

I grew up in Georgia and my first snow was the Blizzard of ’93. I was so excited. But as a nine year we had very little snow friendly (see: waterproof) clothes. My enterprising mother put my dad’s warm socks on my feet, sneakers, and taped ziplock bags over my sneakers to keep them dry!