I make fun of my husband sometimes. His silly antics and freak outs. His funny remarks and things he does that drive me nuts. But I love him. More than anyone. I’m so glad I met him and honestly, I don’t feel like there is anyone else in the world who could be a better match for me. 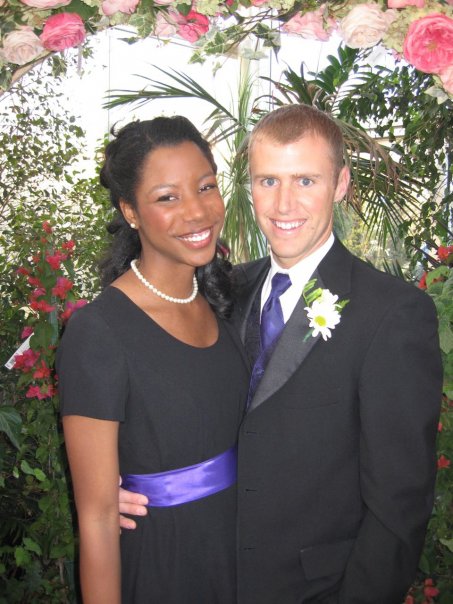 Although we’re a perfect match on the inside. If my husband and I had met just 44 years ago, in some states, because of how we look on the outside, it would have been illegal to get married. ILLEGAL. In 1967. That’s nuts people.

This hatred was taken out on people like Mildred Jester and Richard Loving.

Let me tell you a story you might not know. It’s one I sadly didn’t know until a beautiful reader brought it to my attention. I’m so glad she did.

Once upon a time, Mildred and Richard a couple from Virgina fell madly in love. In 1958 they decided to get married. But because she’s black and he’s white, they had to travel to Washington DC to be legally wed. When they returned to Virgina to start their lives together, they couldn’t.–Because it was illegal for whites and non-whites to not only marry, but live together. They were hauled off to jail, sentenced to a year in prison, and exiled from Virginia. They couldn’t even go back to visit their families.

Mildred wrote a letter in protest to then Attorney General, Robert F. Kennedy, who referred her to American Civil Liberties Union who helped them file a suit that eventually got brought up to the U.S. Supreme Court in the case Loving v. Virginia. Get this–The state’s argument was that it wasn’t discriminatory because they punished “both parties” (meaning Mildred and Richard) equally in their “crimes.” The court dismissed that argument.

June 12th, 1967 they won their case. The anniversary is today, and now known to many as Loving Day. The organization was started by a fierce group of people who want the memory of the Lovings to live on. Their goals?:

You can read more about it here, add them on facebook, and see if there are any Loving Day events near you.

Sadly there’s nothing near me, or in Texas at all for that matter this year, but maybe I’ll get something together for next year. Anyone near me want to join in?

I’m so grateful for this couple and that they made it possible for my husband and I, and others to marry who we fall in love with. No matter what race.

I am blown away that it was in 1967 that this took place!! We’ve come a long way but sadly we still have a ways to go!! Thanks for sharing this. You were right I was not aware!

So very happy you found this information useful!

My Husband and I celebrate Loving Day every year, and feel so grateful to interracial couples that came before us and made our marriage a possibility.

We got have lots of work to do though!

What a beautiful story…thanks so much for sharing. Happy Loving Day!

Wow, I had never heard that story before. Heartbreaking and inspiring all in one.

While not as remotely dramatic, there was a time where I had to fight my family for my husband and I’s relationship to be acceptable. It’s sad that it had to happen but in the end, I think we changed the way two people look at love and color, even if just a little bit.

I loved this story. My grandmother told me it was illegal in SC to “marry out of your kind” as she called it until 1989. How true that is, I never researched it. I never cared. Though now divorced, my first marriage was interracial. From which I have 3 beautiful children. Even though I have since remarried, and have 2 non-interracial children in addition to my other 3, the stares and comments don’t stop. It’s terrible to think in this day people can be as biased as they were 50 years ago. Hope you have a great Loving Day!

Happy Loving Day from the UK! I knew about the Loving v Virgina case but hubby didn’t so I’ve educated him & he was gobsmacked and agrees that we should publicise Loving day from now on. 🙂

WOW!! Thank you so much for sharing this. I would have never known about it. Then Happy Loving day to you..and to me and all of us in a biracial relationship. Off to check out if something goes on here in my neck of the woods. You are beautiful together and you make very cute babies, by the way 🙂

I really enjoyed this post, Jen. Growing up in Va. we learned about this, so this wasn’t completely new to me but a great reminder. I hope to attend an event next year. Keep inspiring us all.

Such a lovely and inspiring post Jen! I adore how you found a picture of you and hubby together in the same pose as the famous Loving picture 🙂

I agree that it is disgusting that mixed race couples were not allowed to marry at any point, but how can you talk about the importance of something like this without acknowledging that it was not until more than 10 years after that in your own church that black men were even eligible to join the priesthood? And that despite the change in doctrine, the pre-1978 standing is still considered a God given prophecy (i.e. God ordered that blacks not be allowed to join! GOD said that according to your church!). This is not meant to be an attack, but rather my utter lack of understanding why anyone of color would be a part of a religion that insinuates God discriminates. I would love to know your thoughts on this.

Anonymous, my post was about marriage, not religion, but since you asked, I believe in the teachings of my religion, but the people aren’t perfect. I don’t have all of the answers but I don’t believe the priesthood was withheld from blacks because God commanded it. I think God allowed it to happen, as he allows many unfortunate things to happen. We have free agency but don’t always use it for good. I’d encourage you to look into blacklds.org and http://blacksinthescriptures.com/mormons-for-equality/ as many of my thoughts align with these.

I learned about the Lovings in junior high school. And coming from a multicultural family it’s hard to think that government officials would go to such lengths. While I’m sure that my ancestors faced harsh criticism for their choices to go outside of their race for love and to reproduce, I am thankful that at least they weren’t exiled from their families.

I’ll never forget eating dinner with you, Brian, my dad and I at Octavio’s in Provo. You two have such a special, sweet love 🙂

Mildred and Richard also had a beautiful, incredible love. I am proud of them and often think of their story when I reflect on my freedoms as to who I can date and marry.

To anonymous, it’s not something most LDS people like. It’s not something even more LDS people understand. But the LDS church certainly is not the only faith or even Christian denomination to have an unfortunate history with race. I try not to get into religion and blogging since it always ends poorly for me, but I will say that I think it’s so important to support Jennifer and Brian in their relationship and faith because that’s how real change goes: through the actions of every day people in their normal, every day lives.

… Stepping off the soapbox…

My husband and I married back in 1981 and while it was not illegal it was certainly not popular. We had our share of problems with outsiders as we began our lives together. I am grateful for the Lovings and the freedoms they forged for all of us who followed after them.

I love this topic so much; the history and the possibility for change, the hope in my heart that my child’s future is not filled with discrimination and ignorance.

Sure, racism still exits, but I am 100% certain that change IS happening. Especially for the children of mixed/biracial relationships, who are collectively becoming a population in their own right.

Jen, YOUR family is a part of that change… most especially in your church. Lasting change comes from within, through dialogue and experience.

From my biracial family to yours, keep living beautifully! Continue to be the change you want to see in your religion.

This is such a beautiful love story. Every year I tell my husband Happy Loving Day. I’m so happy we can marry the men that we love regardless of color/race.

A big thanks to you for bringing this to my attention! My daughter was actually baptized today (Loving Day). What a coincident!!! She is the product of an interracial marriage! I’m black and my hubby is white. As I sit down to write by blog, I thought about my approach and now I have just the right angle! Thanks again!!

Thank you so much for sharing this story! I am in a biracial marriage, my husband is (mostly) Mexican, and I am white. His grandfather and grandmother were also a biracial couple, Mexican and white, which was a MUCH bigger deal back when they got married in the 1940s!

I am so grateful for couples like the Lovings and my in-laws for braving the world, not caring what others said about them, and marrying for LOVE!

Thank you so much for sharing this story! I am in a biracial marriage, my husband is (mostly) Mexican, and I am white. His grandfather and grandmother were also a biracial couple, Mexican and white, which was a MUCH bigger deal back when they got married in the 1940s!

I am so grateful for couples like the Lovings and my in-laws for braving the world, not caring what others said about them, and marrying for LOVE!

Jenn, my husband I’m black and my hubby is white. I knew about the Loving Cade, but didn’t know there was a “day” for it. Thanks for the info.

Yes, Loving Day is a special day for us as well. I get excited about it (like a geek) every year. 🙂

Thanks so much for posting this! My husband and I are also from difference races. His family is from India and I am white. It’s so embarrassing that this was the law in our country at one point.

My husband & I are also from different races, so I am always sad to hear about stories like this. And to think it really wasn’t that long ago. I am so glad things have changed for the better!

WORD up to that!!!!! I would join you Jenn. Let’s do this thang!!! In Texas. I knew about them. Their struggle….but I did not know they now have a “Loving Day!” because of them. I LOVE that it is called that. Because of his last name. So awesome….so glad you brought this to others attention. How easy it is to forget…..

I read this case in law school. I found the case name “Loving v Virginia” so fitting 🙂