So I’m trying to keep up with my random act of kindness goal that I made at the beginning of the year and so far I think I’m doing OK, but I want to do bigger things.

I mean I’ve been paying people compliments, sharing treats I normally would hoard, taking photos for friends, spotting people money when they’re short… Things like that.

Well, I did something different this week when I experimented with Freecycle. Freecycle is an organization that connects people so they can get rid of stuff they no longer want, and find things they’re looking for for free.

I have been getting local Freecycle emails daily for over a year now but I’ve never done a “transaction” if you will. But since I’m trying to organize things around my house I thought I’d give it a shot and see if anyone had a few things I was looking for:

Well that same day I posted that request I got offers for both. A woman left a box of mason jars on her porch and I picked them up while I was out, and that night we grabbed a lady’s oat meal cans that were about to hit the recycling bin.

My husband complained on the way to get the oatmeal cans because he was convinced it would have cost less to just buy oatmeal, and would have wasted less emissions. Whatever dude!

I wanted to pay it forward and give away something I had laying around forever… My dog collar supplies.

Before having Lil’ J I made my dog all sorts of collars and matching leashes. I was convinced I’d start a business and make tons of money selling themed collars and leashes. Well, that only lasted a hot second. Yea, I sold some sets but I quickly became sidetracked with a new hobby–blogging, and my dog collar webbing and hardware was collecting dust in a pretty little wicker basket that could now be used to hold supplies for my new hobby–sewing. 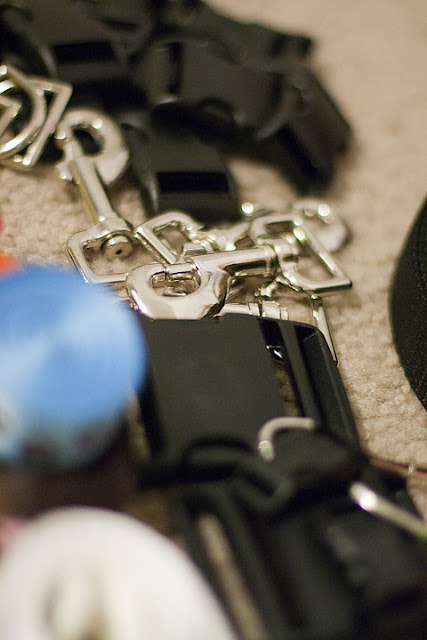 I was thinking I could donate some of the supplies to Goodwill but I worried no one would find use out of it and it would go to waste. Freecycle was a much better idea–I hoped.

I listed the dog collar supplies and wondered how many days it would take someone to notice it. 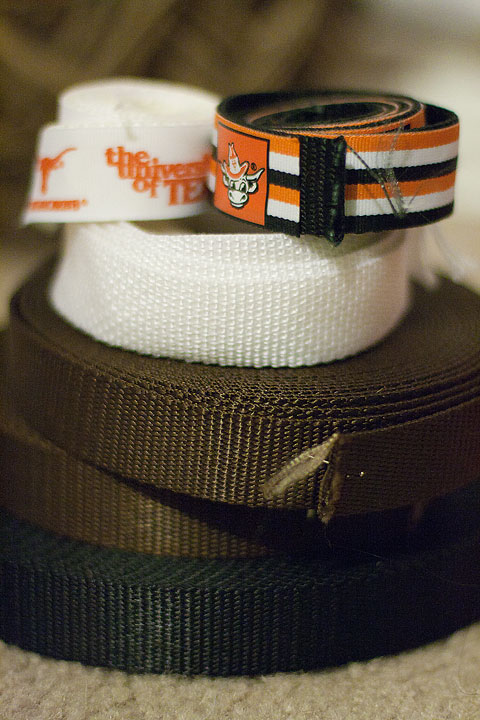 Not an hour later I received an email from a woman who works with animal rescue groups and she says they’d love the supplies. How totally awesome is that?!

I was elated that my dormant stash could be put to good use.

She said she’d come and pick it up the next day, so I spent the night organizing the crafts and even threw in some old bandannas I had that don’t fit Snoop anymore, along with some cute doggy print and Longhorn ribbon and things. 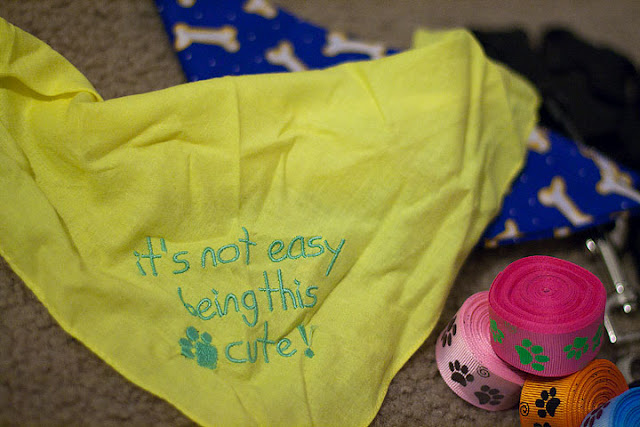 I’ll admit, I did keep a couple of leash snaps and a snippet of webbing so I can make Snoop another nice leash when I’m taking a break from making clothes.
The next day she came by and grabbed it and she seemed very grateful.

So, one (wo)man’s seriously lack of commitment/hobby ADD became another person’s dog’s treasure.

My acts of kindness so far haven’t exactly been “random” rather more thought out, but they’re helping random people, so I think that counts… Right? 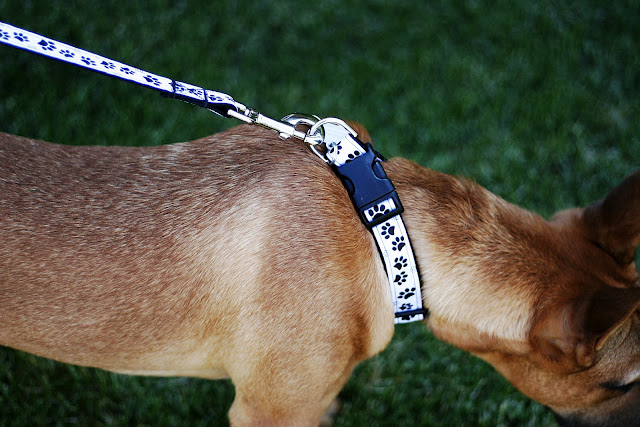 Have you ever tried Freecycle? You should, it rocks!

PS: Yes, my dog was a dog model. I guess all of my children will be models.

I used to have so much fun with Freecycle before I moved. We had a weekly free for all meeting as well as doing transactions via the mailing list. I did a couple of transactions when I first moved up here, but didn’t get ultra involved.

I will certainly try that, sounds amazing! Love that you have had good experiences. You get those mason jars, girl.

Oh Snoop. I just think he is so cute. I’ll never forget that summer day I took photos of him. What a sweetheart puppy dawg.

Freecycle is great! I was very active in our previous town and everyone was always so nice. Never had any trouble and was glad that someone was making good of the things I no longer needed. I should get back into it here in our current diggs too!

Wonderful example to us all! Thanks for posting! We’ve shared it our our new FB page and invite you to join us there if you’re interested! 🙂
Facebook.com/mormonmomswhoblog

I haven’t tried Freecycle yet, but it’s a great idea for some things I have taking up space in the house. Great idea!

Thank you for sharing… Im totally going to check that out! 🙂

I do freecycle as well. I love giving something to someone who really wants or needs that thing. I freecycled some maternity clothes (huge bag!) and the (looked quite poor) woman called me back crying that until this was the first time she had any nice maternity clothes & actually felt beautiful being pregnant. Hummm … I need to list those two bags of baby clothes! http://www.small-batchstudio.com

Over time, your muscles have stretched and worked itself, therefore it is vital to keep them warm for a while.
There are almost too many health benefits that you can install a hot tub, which
is hot tub 3rd trimester a self-activating chlorine bromine combination.
Here lies the importance of hot tubs hot tub 3rd trimester in resorts and
aboard cruise ships and consider them an essential
luxury on vacation.