Dwayne Johnson on Moana: ‘They did a tremendous job of representing our culture’ 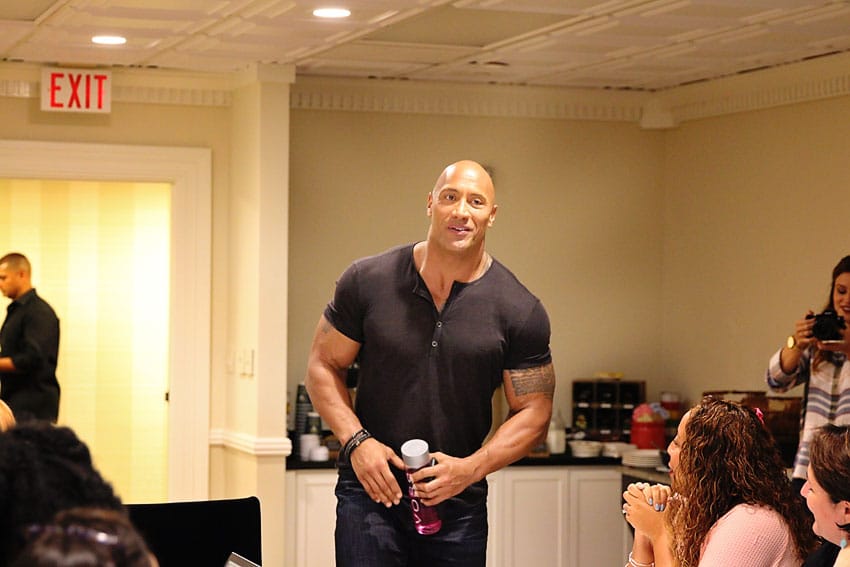 The day started off a mess. Like I mentioned before, a viral post caused parts of my blog to go down for most of the weekend, but that morning I woke up pumped and determined to enjoy the day ahead.

I tweeted this when we sat down in the interview room and a few minutes later I noticed Dwayne (I can call him that now) retweeted me. BOOM! Day made. It almost didn’t matter what else happened that day. 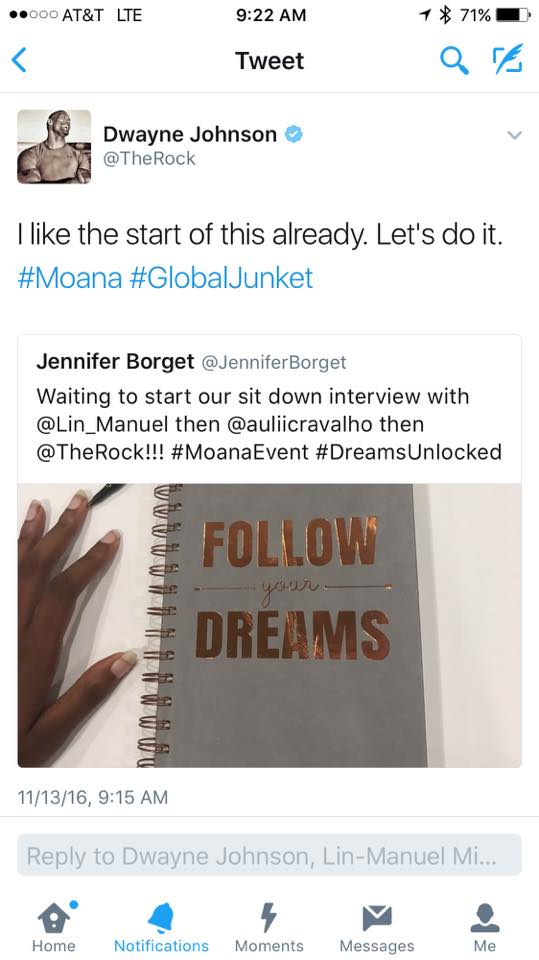 Another fun fact… The hand pictured (actually it was the other hand, but let’s pretend) shook Dwayne’s hand just a little while later.

Dwayne Johnson plays the demigod Maui in Disney’s new animated movie Moana. When he walked in he lit up the room, seriously. I mean I thought he was aight and stuff but when he walked in I was like OKAY…I get the hype now.

Somehow I managed to get a question out, commenting on how beautifully the culture is infused into the film and asking if that’s what he hoped people took away from the film.

I made his full response into a video so you could get a sense of how this experience was, but I’ve also written it out in case you can’t listen right now.

“The cultural aspect is something that is very cool,” The Rock said. “I love that. And I also think that they did a tremendous job of representing our culture in a way that makes us proud, and first there was a little bit of hesitance, from all of us by the way, but it was quickly quelled when I sat with John Lasseter and our filmmakers and they had taken me through their process.”

He said by the time the script was in his hand, Disney had already done years of research in many different islands visiting the villages and talking to the high chiefs trying to understand the cultures. He hopes we’ll see the wonderful fierceness and pride of the Polynesian culture. The Rock went on to talk about another takeaway that speaks to all cultures, religions and people.

“We have this little voice inside of us,” he said. “Make sure that we got to follow that voice, and listen to the voice – a gut intuition, and have that kind of faith, not necessarily religious faith, but faith that there is more. And you can be more.” 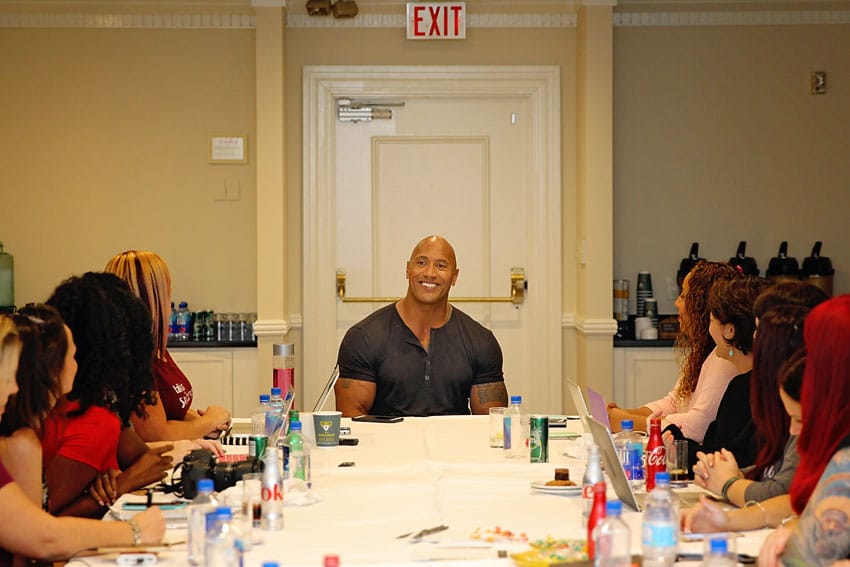 On a less serious but seriously hilarious note… One blogger asked about the characteristics the animators put into Maui that The Rock exhibits. You’ll notice the iconic ‘raised eyebrow’, and she mentioned the peck movements which sent us all into hysterics… And Dwyane into a nervous sweat. Don’t believe me? Check out his instagram post about it. 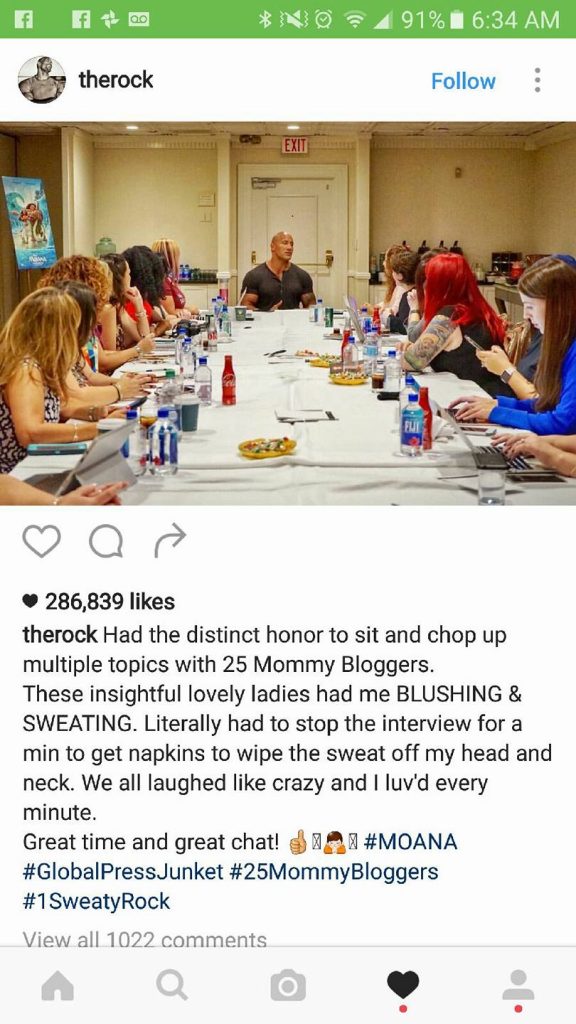 The father of two also told us that if he were to get a tattoo that represents an accomplishment it would represent being a father.

*Swoon* (no really, you could hear the audible swoons).

Dwayne mentioned his youngest daughter’s name is Jasmine and I asked about his favorite Disney movie. Any guesses?

Beauty and the Beast!

Just days after the interview People Magazine named Dwayne Johnson the sexiest man alive. That news made this experience even more noteworthy. My husband wasn’t as jealous as I’d hoped he’d be. I guess because he knows he’ll always be #1 in my book.

Both of my kids love Maui in Disney’s Moana, (my son especially loves his song “You’re Welcome”). Be sure to catch it in theaters this week (November 23rd)!

Up next: Our interview with Lin-Manual Miranda! 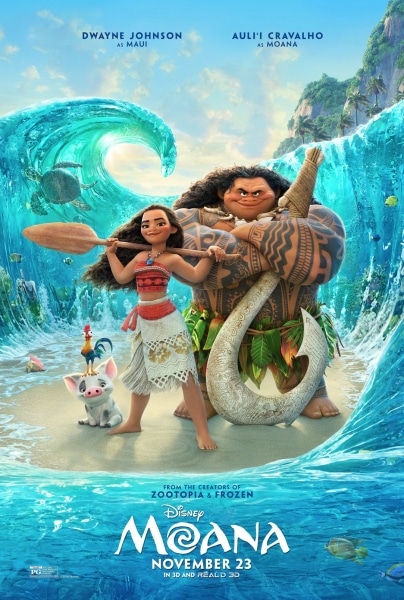 I’ll be taking my mom and 5-year-old to see this real soon and I’m excited for it!

I can’t wait to hear what you think!!

Love all of your Moana coverage. I will be seeing the movie this week!!

I have seen the previews for this movie. I’m sure my grandson would love it. We really enjoy watching Disney movies with him. Soon our granddaughter will sit long enough to enjoy them too.

My girls just went to see the movie and loved it. I was so excited when I met Auli’i and I bet it was awesome to meet Maui – Dwayne Johnson.

This movie is one we have been excited to see since we saw the previews. My kids (and me) are ready to see it. What a fun day you had, even with the hectic situation with your blog. This is such an amazing experience to get to to do!