“Do These Pants Make My Butt Look Big?”– “No, But Your Diaper Does”: Cloth Diaper Experiment Week 2

Call me vain, but one of my concerns with putting Little J in cloth diapers was them not fitting under her adorable clothes.

Now thank goodness, 95% of her wardrobe is made up of dresses, so it’s not a huge deal that her bum is now the size of a grapefruit–A big one–Thanks to her cloth diapers. I just have to be sure that what little part of her diaper that is showing, matches her ensemble.
Some say this is a misconception but I’m here to tell the truth… Cloth diapers DO make babies butts bigger! But to me this is a big fat “DUH!”
Luckily, with Little J’s Sprout Change diapers, we haven’t had a big problem with getting her clothes on, UNLESS I double up the layers of inserts. When I add an extra piece of cloth in there her booty is a balloon.
This isn’t necessarily a bad thing if you like that sort of look. Some people like big butts. I, by habit, find myself spanking her bum all day just because it’s fun to hear and it’s soft–I dunno, it’s a strange obsession. If she was standing and were to fall she’d have a lot of cushion to soften her fall, that’s for sure.
But back to the dilemma– Cloth diapers and clothes.
I was watching Lil’ J on my day off and her daddy had to work. It was my second full day of being with her and changing her new diapers all day, while he’s used them full time for the past week. I must say I have a whole new level of respect for my husband because I was changing her diaper what felt like every hour!
Every time she’d get wet she’d get cranky and fussy (which could be tied in with teething but really, wouldn’t you if you’re sitting in your own puddle?), and I was curious if adding an extra layer of microfiber would help her sleep and maybe not feel it at much.
I have 10 Bum Genius inserts I bought originally thinking I’d use them in my gDiapers, before I learned that you can’t put microfiber right against your baby’s bum (it over-dries their skin) so I took one out, and placed it under her organic Sprout Change insert and voilà! A big absorbent butt!… I mean diaper.
When I was performing this experiment it kinda reminded me of that scene from Teen Mom where Farrah forgot diapers for Sophia when they were at the car cleaners, so she asked for towels and she wrapped a bunch of hand towels around her daughter’s butt and tried to put her pants back on.
It worked– For both of us. Little J was able to take a long nap and when she woke up both layers were soaked! But it didn’t leak from the waterproof cover and I guess she didn’t feel it as much. Or maybe she was just really tired. The downside was the appearance, but we were just hanging out all day so no one saw her lowriding her pants. 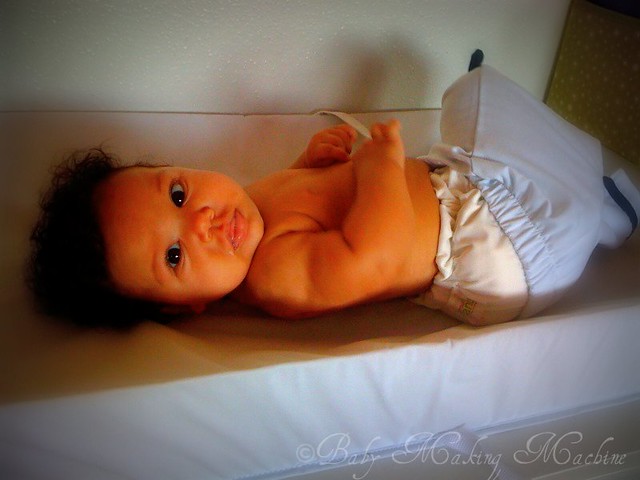 I pulled her bottoms up as much as I could but the crotch of the pants stopped short, stuck on her diaper.
Same goes when she wears her FuzziBunz… Her Bunz are HUGE! 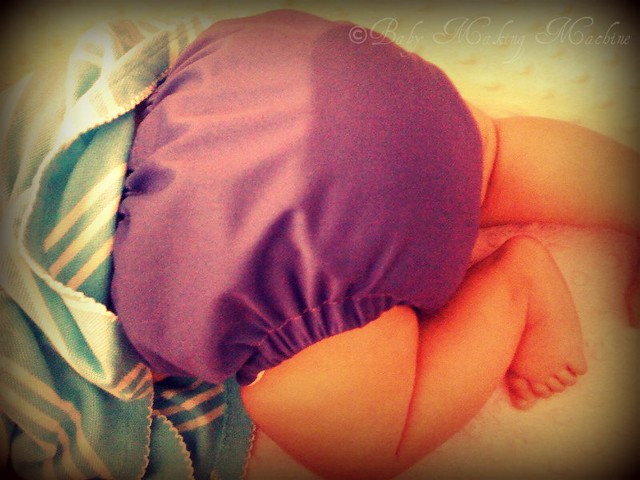 She’s already a big girl wearing 6-9 month clothes at 3 months, but I guess cloth diapers may mean we’ll need an even bigger size for some things.
Luckily she won’t need to wear so many cloth layers unless she’s napping (if we want her to nap more than 15 minutes). Other than nap time her Sprout Change diapers are nice, slim and sleek, like her disposables would be. Some other diapers I have (like gDiapers and most all in ones) are a little bigger, and check out this one… 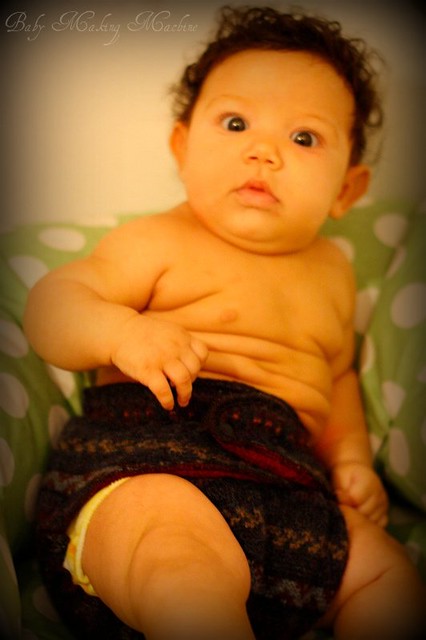 …To be used when we visit Utah in the winter.

I’m not sure why this even bothers me. Maybe because I’m a woman and I know no woman wants a humongous butt. I, personally could use a little more junk in my trunk, and sometimes I’m in a hurry to the bathroom. Do they make cloth diapers for women?

Three people who comment on this post before October 25th at 11:59pm will win 250 business cards from PrintRunner.com. The cards can be full color, black & white, printing on one side or two sides, glossy or matte – it’s up to you to choose! Follow @printrunner on twitter for an extra entry.

My Baby Girl was chunky like her and she always wore bigger clothes. One of my favorite things to dress her in were the all in one rompers because they were cute and easy and her little pudgy thighs were so cute. Of course those were better from summer than winter.

If you need more absorbancy to keep her dry try a natural fibers insert like hemp, cotton or bamboo. They hold WAY more than mircrofiber and are much trimmer so you don’t get the giant diaper booty. The other think you could try is a fleece liner. It won’t had any absorbancy…but it will wick away the moisture so baby girl feels drier. Good luck! And for what it’s worth, I think the fluffy butt is adorable!

I thought my son’s but looked soooooo weird when we first switched to cloth. Like this big, round bubble butt (OMG, his butt…it’s just so…big! It’s so…round! It’s like…out there!)

Honestly, you get used to it. It’s just what I know now. I had him in a little beetle fitted, which has a soaker in the middle and has barely the thickness of underwear in the back…it was very, very strange to see that tiny, flat booty and be able to feel his butt (instead of fluff) when I was holding him, LOL!!

Ok, you are too hilarious. I can totally understand you wanting your baby to make a fashion statement ;). I will do the same too for mine when I do have them. I like that you can coordinate the outfits with the cloth diapers–too cute. Anyway, I gave you a stylish blogger award which you oh so deserve for so many reasons. Come by and get it when you can :).

She is gorgeous! But, I do get the whole big butt thing. Too funny!!

I love her eyes, she looks very surprise. Is like she saying “No, mom don’t write that about my butt…” LOL!

I love her big fluffy bum! Fuzzibunz are big on babies but they get less bulky as they grow. We use bumgenius now and they are super trim and very absorbent. We use their organic aio and love them! I’m so glad cloth is working for you! Cloth is wonderful!
Elle

I know all about the lowrider pants syndrome. Moo was a big baby and we had to get her diaper two sizes biggers and boy did her booty look big. My family teased me a lot about it. I think it’s the breastmilk that makes them grow so fast. Within her second week home from the hospital Moo had already outgrown a size 1 in diapers.

I was freaked out at first because I didn’t think it was normal and I knew I wasn’t over feeding her but yet she was already in a 3-6 months as a newborn. Thankfully, her doctor calmed my worries. Moo was healthy and that was all that mattered.

I cannot beleive how big she is getting! Wow!

Wait! You are coming back to Utah! I vote for a reunion!! We usually buy bigger clothes for the cloth. But they are SOOO cute under dresses!

Haha…my son was in 6-9 month clothes at 3 or 4 months too, and now he’s wearing 12 months and he’ll be 12 months in a few weeks. It seems to have evened out. They just released a new growth chart for breastfed babies (should be at your doctor’s office) and if I’m not mistaken, it shows that breastfed babies grow quicker until 6 months, then slow down.

The puffy bum is less noticeable now, too, and his pants are fitting nicely. I think I just might miss patting that fluffy little bum once diapering is over!

I am digging those cloth diapers. Maybe when I have another child someday I will be brave enough to take the full leap. We tried one out briefly when my son was 5 months. It wasn’t as bad as I expected.

Too too cute! Love the pictures and the last diaper especially – great for winter!!

I have always put my Lil J in bigger clothes even though he is pretty average in size for his age. I started putting him in 24 month clothes around 13 – 14 months lol. They’re huge on him but I can always cuff up the pants and sleeves. Plus, I’ve noticed lately his 18 month clothes are getting a little snug. He must be longer in the body or something!

She is so cute! I actually love the big cloth diaper booty. I think its precious. As she grows the diapers will seem a bit more proportional. It seems like you guys are getting the hang of things!

I love baby cloth diaper butt! Its so cute! So much cuter then sposies I think. But i totally understand the clothing issue, and never really thought about it. huh, anything thing to add to my list!

She’s adorable! I remember when my daughter was that age, they are so much fun. Yes the diaper butt is something else. Enjoy your baby time with her they grow fast

We’re a “pampers” family, but when I have my own kiddos, I would LOVE to try cloth diapers! I’m taking notes I tell you! 😉 xoxo

A great post as always. She is so cute and I love the cloth diapers. I look forward to using my own some day.

That baby girl is adorable. Your blog is great 🙂

THIS IS AN AWESOME GIVEAWAY! THANKS SO MUCH FOR THE OPPORTUNITY! kytah00@yahoo.com

I have never used cloth,but my mom did on me!
ardelong2(at)gmail(dot)com

Those cloth diapers are to cute.

She is so adorable and I always enjoy your blog. Thanks
mightynaynay(at)cs.com

I don’t think you should be worried about how your baby’s butt looks in a diaper. Kids wear diapers. They don’t need to look “just so” in their little outfits. They’re children. Too much emphasis is based on appearance and “being sexy” even with little ones. With the prevalence of predators going after kids these days, I would have expected to see a return to the simple, shapeless children’s clothes that were common a hundred years ago. Instead, we see children dressing as miniature adults and worrying about their figures when they’re pre-teens. Please don’t take this as a personal attack; I think you’re just trying to be funny. It just really bothers me to see the way parents dress their children (or allow them to dress) knowing the sick people that are out there preying on kids.