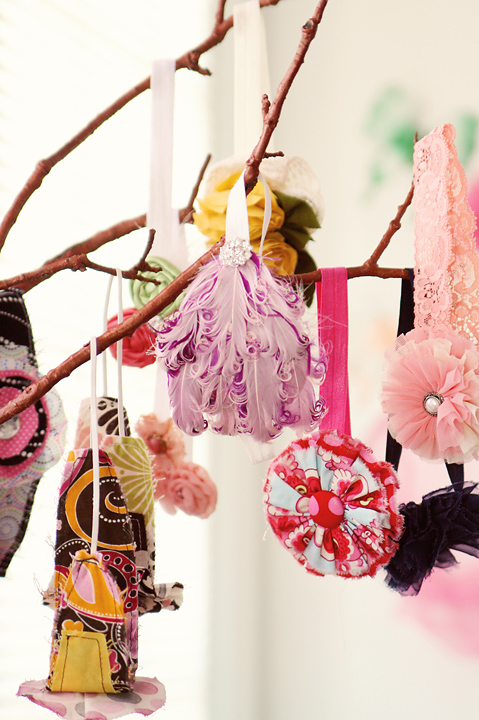 I’ve been so giddy about this What I’m Makin’ Monday since I came up with the idea to make this a few weeks ago. I had been looking for a way to organize my daughter’s hair bows. She has dozens and dozens of headbands not including the flowers and clippies that go on them. Until now I’d been tossing them in a bin on her dresser, and while it’s somewhat organized, I have to dump the entire bin out to find what I want each day.

I wanted some kind of organizer like a necklace holder. I remembered seeing a jewelry tree before and it clicked… How about I make a headband tree!

I read this tutorial which proved to be slightly helpful, but not totally, because we don’t have the same stores here that carried the same supplies (like manzanita tree branches). None of the craft stores I called carried those. I could order some online but I opted to go the hood route and rip a branch one off an unsuspecting tree for Free 99.

So here’s what I used:
-Tree branch(es) trimmed down to the size I wanted
-Flower pot
-Craft paint
-Primer (optional)
-Quikrete (cement)

1. After ripping the branch off the tree I brought it inside to dry out a few days. Then I broke the branches off to the sizes I wanted, and sanded them down. 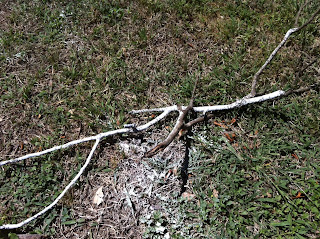 2. I had a little primer left over from a previous project and tried to prime the branches, but it ran out about half way through so I gave up on that idea. I don’t think it’s crucial… But I’ll let you know if my paint starts chipping in a few weeks.

3. I grabbed some copper craft paint I had left over from her mobile project and used it to paint the branches. I did two coats and let it dry. 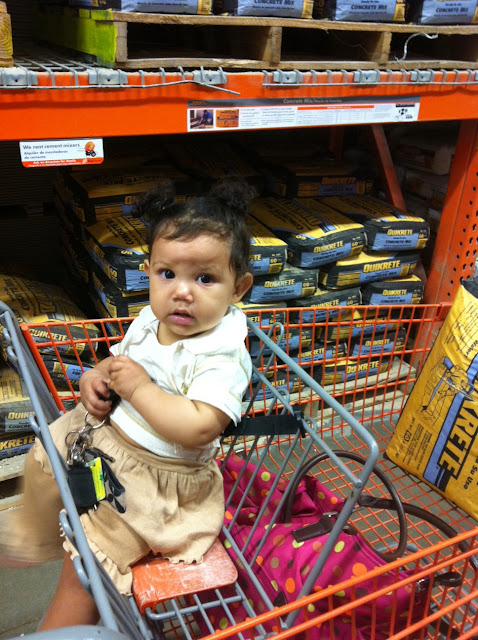 4. Lil’ J and I went to the store to find some kind of mold for this project, but Home Depot said I should go to Michael’s for the “plaster” I was asking for. But instead of loading her back in her car seat and across the street and out again I decided to get some quikrete (just add water stuff). The smallest size they had was a 60 pound bag. Luckily it was only $2.13, so I didn’t feel so bad. My husband still freaked out wondering why I had a huge bag of concrete in the car and rolled his eyes when I told him it was a craft project. 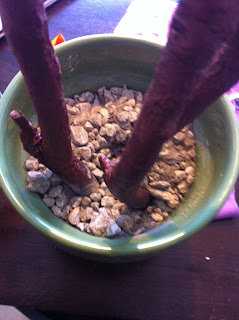 5. I poured the concrete in the flower pot and stuck the sticks in. I added too much water, poured it out, and let it dry. Then I added a little more to stabilize it more, and left it outside to dry more. 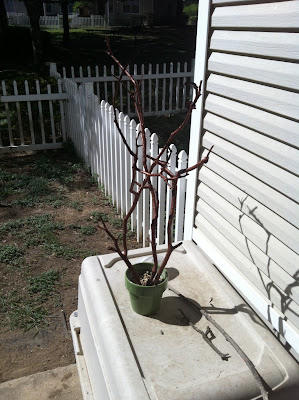 6. When I brought it all inside I touched up some spots I saw I missed painting and let that dry. 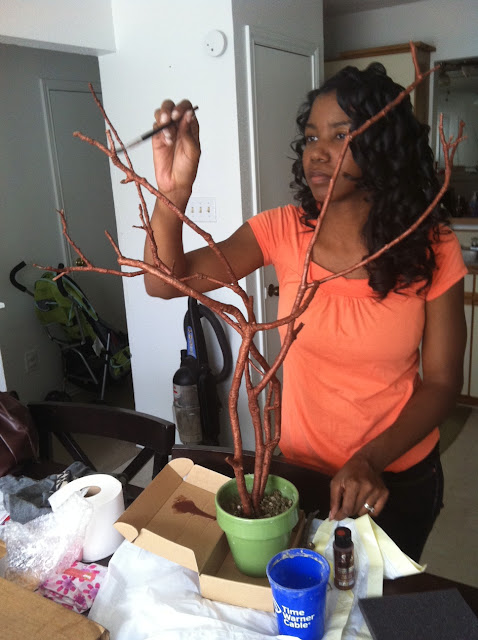 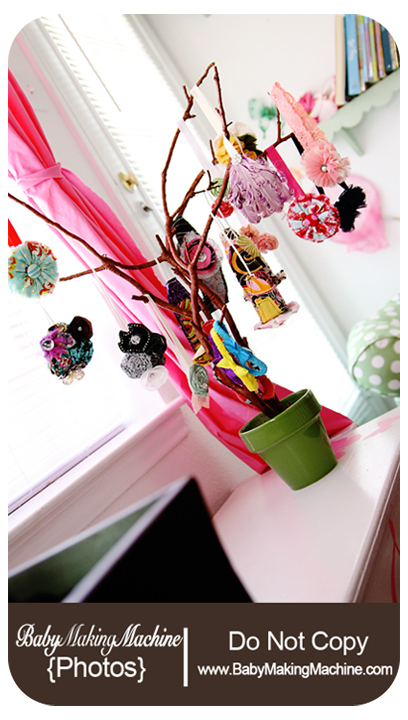 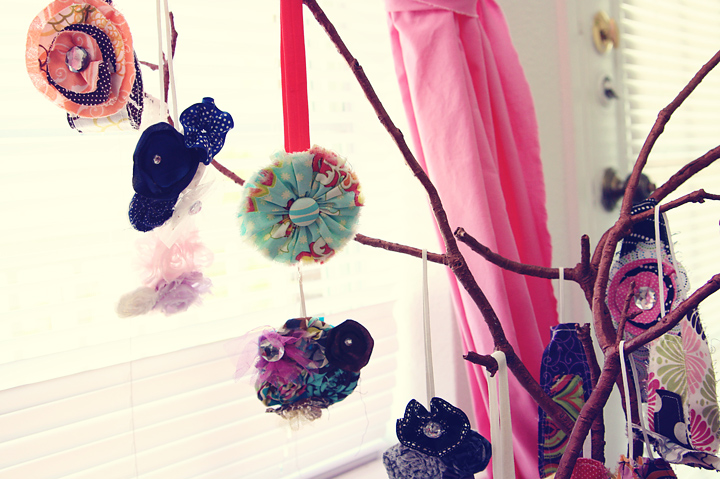 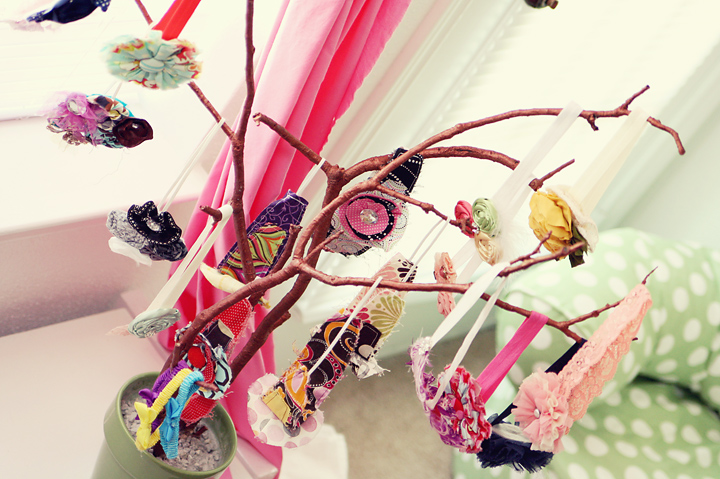 What do you think? Are you impressed? I hope so! This whole project cost me about $6 since I already had the paint. I just got a $3 pot and some concrete and BAM! Fabulous hair bow organizer! It’s easy to see and grab which bow I want for the day.

I still have another dozen or so plain-colored headbands still in her bin. I decided I’d just hang the pretty boutique ones on her tree.

*note* I made sure to pick a branch with lots of little twigs coming off so I don’t put too many bows on one branch, requiring me to pull several off the same branch to get to one.

What did you make this week? Link up! 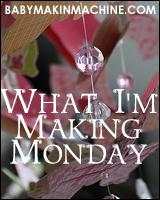 I am impressed! That is so cute!

SO cute, jenn! I think I will do this one for sure as a summer project! and you can always make a few and sell them on etsy or give them as shower gifts if your hubby is worried about the claycrete being a mess… or you can use them for a bunch of projects, I use that stuff all the time in my sculpture classes. btw, you looked awesome in your today show debut (and in my mind, there is no such thing as TMI when it comes to baby making… I LOVE your blog 🙂 )

Love it! It turned out great! Nice work mama!

It looks wonderful. I’m envious of her cute headbands, I want some for myself. Are you planning on putting some fake grass/fabric in the pot to cover the concrete. That would be so cute with little wires to hold your new buggy barrettes.

That is really cute. You should etsy that! I’ve been trying to find a simple bow organizer I can make too. I have all my daughter’s headbands in a box under the bathroom sink and it drives me nuts trying to wrangle her and dig through the box to find what I need.

What a very cute and novel idea! Oh and yes cheap! I would have never thought of this. Who knew one little girl could have so many bows and clippy things…..too cute!

I like that idea! I’m in the process of rebuilding Moo’s hair bow collection now that she’s getting into wearing them and this would be a perfect way to keep up with them and add a little decoration.

Wow, Jenn! I am so impressed. No. Scratch that…beyond impressed! It looks amazing. Having really cute heandbands does help.

You are amazing!! I need to start thinking of my own DIY projects….

Love it, Jenn! Your creativity is inspiring!

Wow, great idea! I am going to have to try that no doubt. I just started making headbands and although I only have two made, I can see this being awesome as I build up my stash. By the way, your hair looks amazing! Any hair secrets you can share? How do you get it to not frizz? Or maybe you are blessed to have naturally frizz free hair 🙂

SUPER cute! I will add your linky party to my list! Thanks Jenn!
-Tiff

LOVE. I have a baby boy so no hair bows for us, but I’ve been wanting a jewelry-holder tree forever and they are really expensive online. Maybe I’ll modify this and make one!

This turned out amazing, Jenn!!! LOVE it!

How FUN and CREATIVE! Another thing you’ve done for me to add to my “When I have a Baby One Day” list 🙂

One suggestion that’s totally unrelated: Maybe it’s just my computer…but can you make your links open up in a new tab? I hate that whenever I click one of your links it overrides your page.

That is SO CUTE! I’d love for you to link it up with So Sweet Sundays, which ends tonight! Also, I hope you’ll stop by and check out my tutorial for a no-sew shopping cart cover. 🙂 Thanks for another great party!

Love it! Posting it to stumbleupon now : )

Cute idea…I have limited space in my daughter’s nursery…so I have a clear shoe organizer that I hang on the back of her door. The pockets hold her hair bows, shoes and it’s good for books.

super cute!! I need a little girl! I’ll hopefully be linking up next week for a craft I’m doing with the boys this weekend 🙂

Very cute! You will be featured in the morning on our blog: http://fabricbowsandmore.blogspot.com/

I’m just seeing this for the first time. This is so cute. Wow! You need to hurry up and have a boy so that when I get pregnant, no matter what I have I’ll be able refer back to your blog. I like having options. LOL

Is your husband a bigamist? I swear he sounds like my husband. Thanks for the laugh-out-loud moment.

Your tree is very creative and eye-catching! I will definitely be making one of my own! Thanks for taking the time to create this post.

This turned out fabulously! Pray tell where you purchased the feathery lavender piece (pictured in the very top photo).

But, have to admit, I love this way more than my curtain rod idea… will try this when I can trust my toddler not to knock it down!

wow. so beautiful these hair bow

But, have to admit, I love this way more than my curtain rod idea… will try this when I can trust my toddler not to knock it down!