Our First Mommy/ Son Trip: Disneyland in a Day With a Toddler

My daughter and I have been on numerous trips together, just the two of us. Our first was to New York City when she was just a month old. Our last was a year ago when we went to Disneyland. When I got word that I won a 2016 BlogHer Voice of the Year Award in the video category and that I was selected to present my work on stage at the conference in LA, I decided to go and bring my little guy along. See more about that near the bottom of this post. But first… Disneyland! 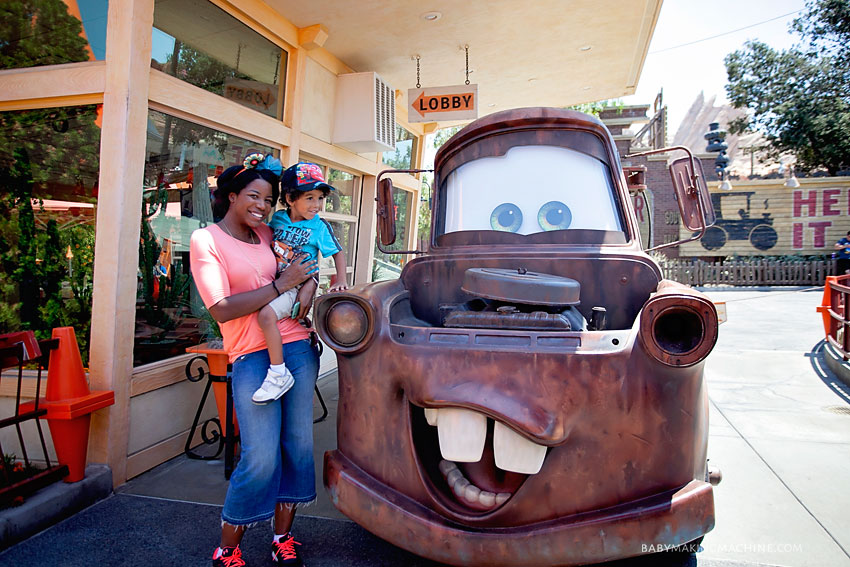 We came a day early and spent it at Disneyland with our good friends The Bells. It was his first time and he was most excited to ride the Radiator Springs Racer ride. We got a fastpass early in the morning then went on some other rides while we awaited our time.

One thing I love about Disneyland is that the two parks are so close together, so park hopping is easy and you can get around fast with little ones. In my experience it’s best to get there early (at opening if possible, especially in the middle of the summer when it’s going to be packed) while lines are short and knock as much as you can out before lunch. 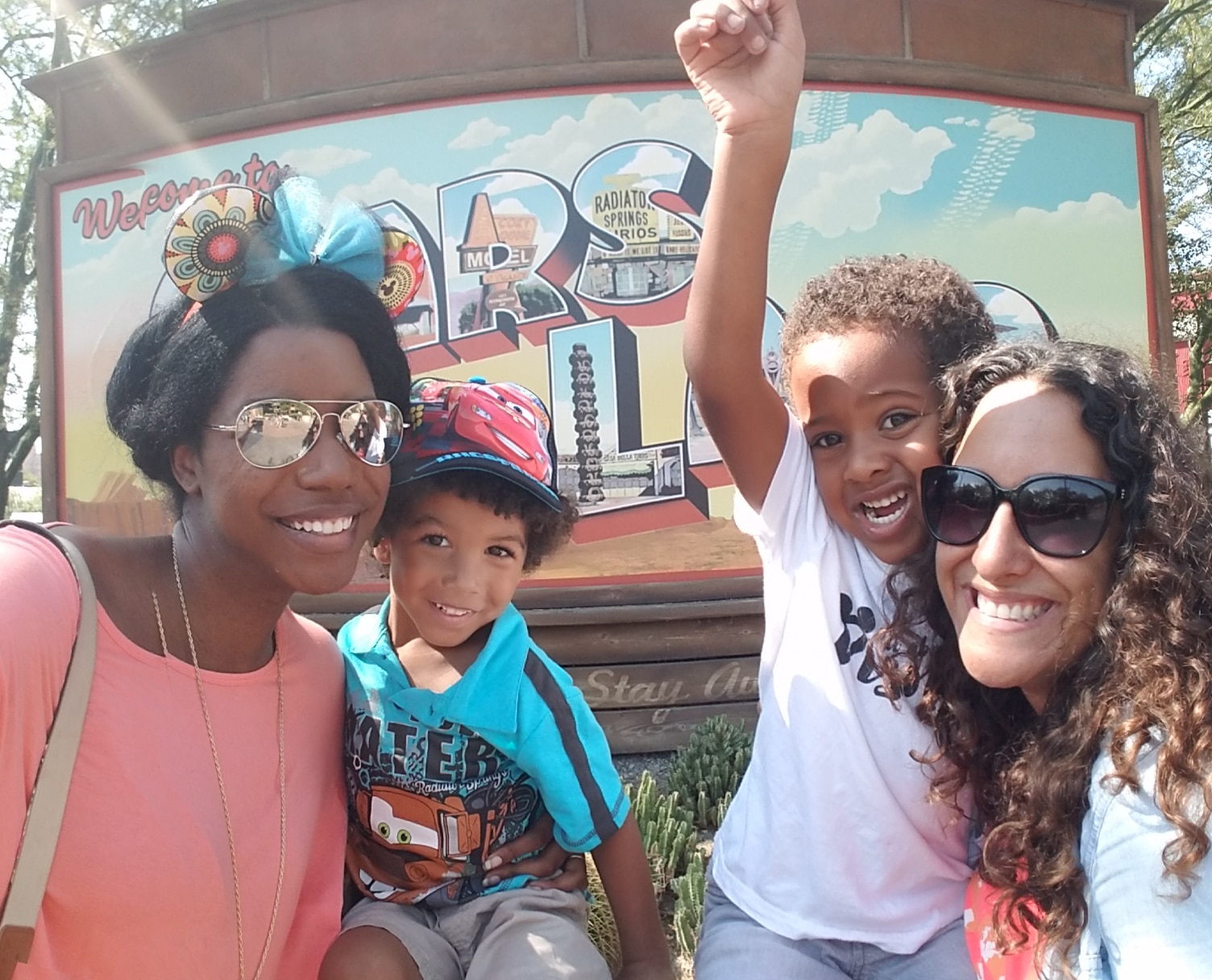 Now I have to explain his excitement about this “Lightning McQueen” ride… He watches the YouTube video of the ride over and over and over. He’s probably seen it 100 times and seems to have it memorized. He barely hit the height requirement and even though his sister said it was fast he insisted “it’s not scary” and said he wanted to ride it. So on we went.

Poor guy wasn’t very tall and he could barely see all of the characters as we drove through, though he knew what to expect. When it got to the racing part I asked him “Are you ready to go fast?!” “YEA!” he yelled.

When we took off he loved it at first. He was smiling and giggling. As soon as we started going up and down the hills his little face contorted in a more fearful look but he didn’t cry as we flew up and down and around the track.

When we slowed down to the finish line he said “that was too fast” but then waved and said hi to Lightning McQueen and Mater who were awaiting us on the sidelines. 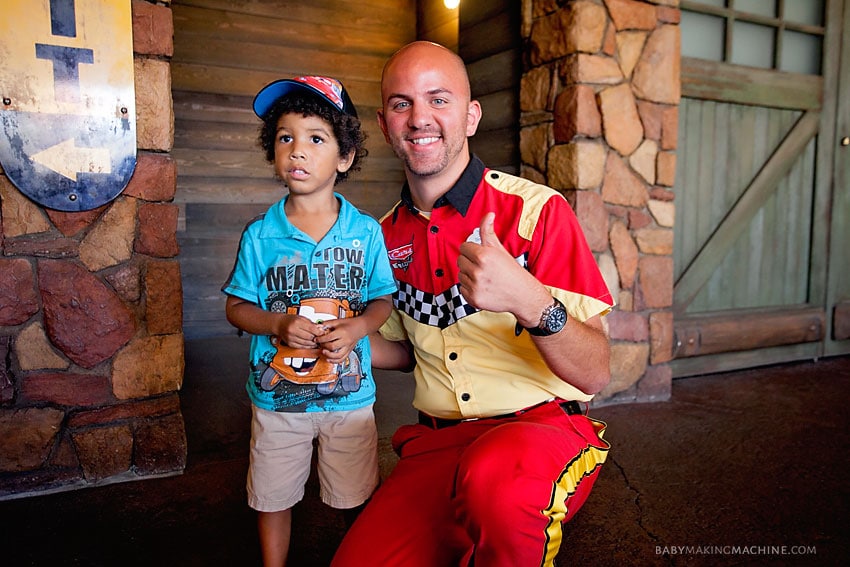 I asked if he wanted to go again and he said no, but later that night he requested to go again. So we’ll see what he says next time we make it back. Either way he enjoyed it a lot more than his big sister who was in hysterics when we got off last year and says she never wants to do it again.

People often ask me what age I think is great for Disneyland/Walt Disney world trips. I think under 3 is a no-brainer cause they’re free. At 3 it’s a little tricky because that’s when they need a ticket and you worry they won’t remember. But let me tell you something… This guy had a blast. 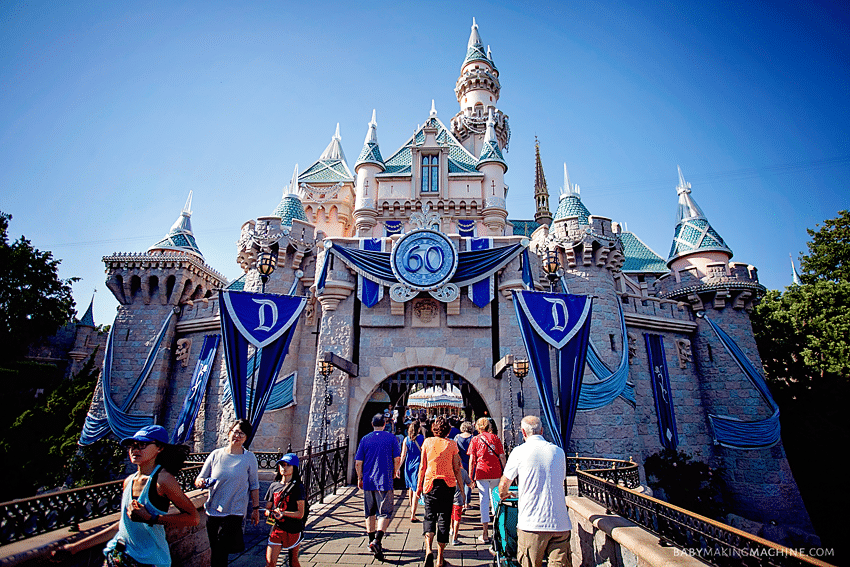 He’s not the most patient child but he did well in the lines considering. There were a few tears when he thought it was his turn and the ride started without us but we worked through it.

We went on so many other rides. Mostly trying to hit the ones that aren’t at Walt Disney World since we seem to make it out there more frequently. Man let me see if I can name them all. In one day at Disneyland and Disney California Adventure with my 3-year-old we did: 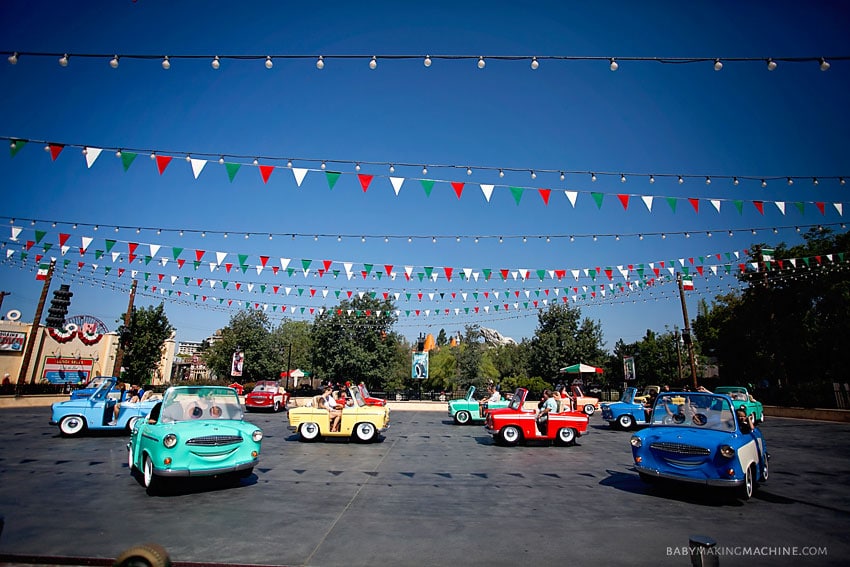 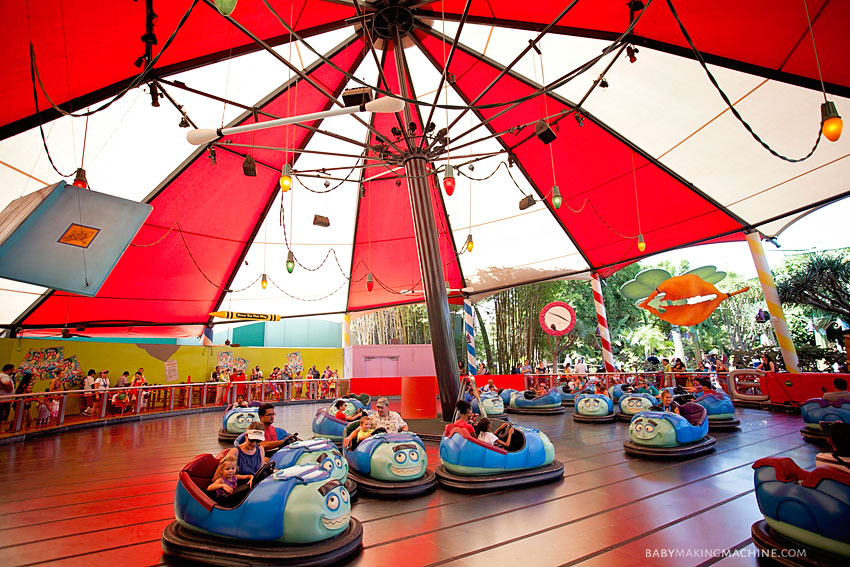 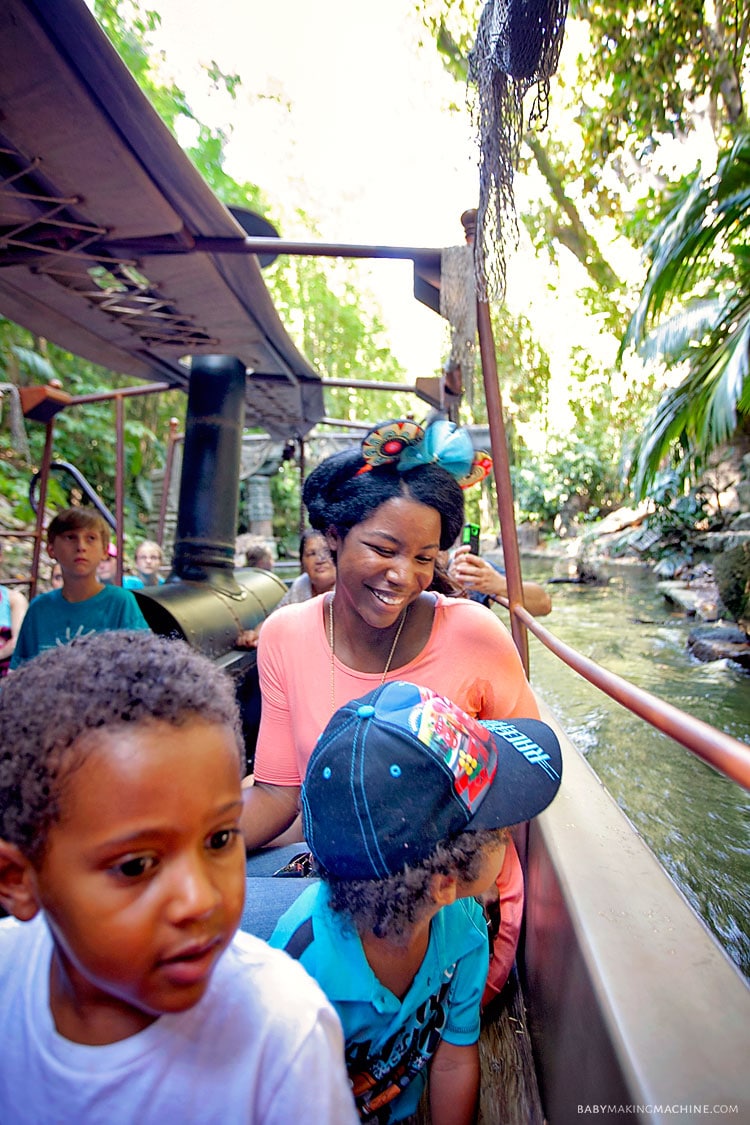 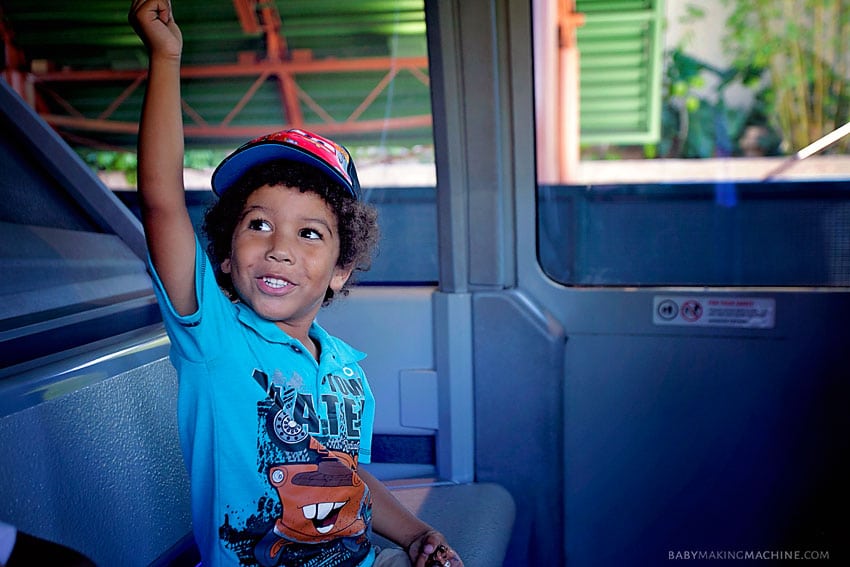 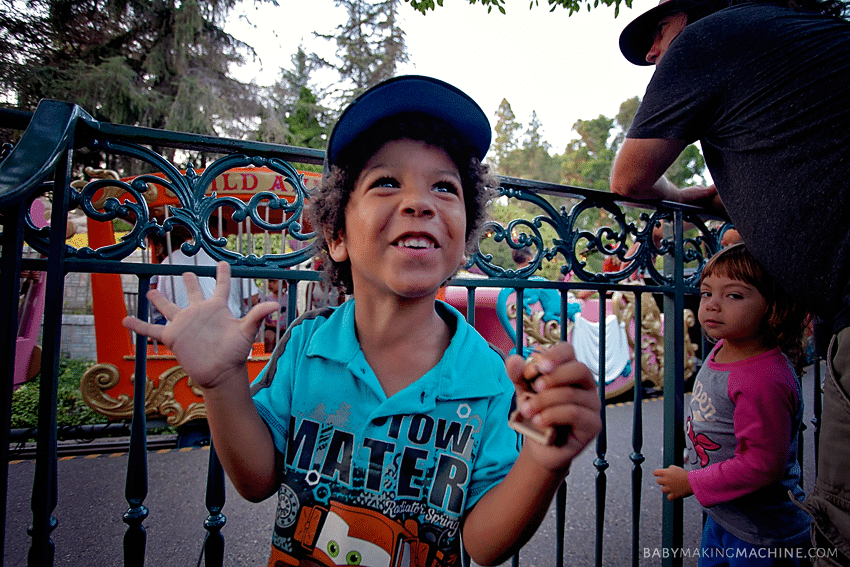 We also got to meet Flick, Mater, Red and Mickey. 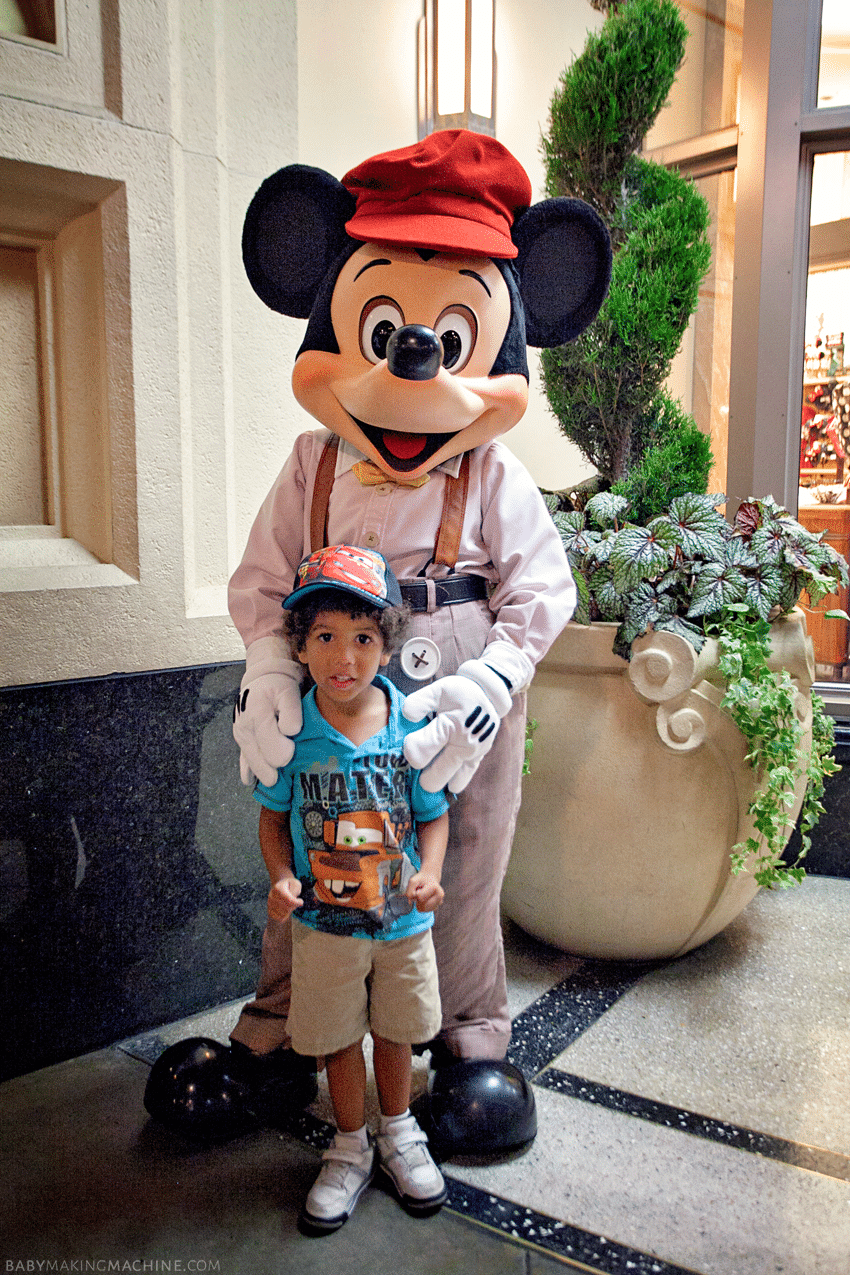 I may be missing a few but I’ll add them as I remember.

I documented the story on Snapchat and Instagram’s new stories but beware… On Instagram you can’t save an entire story at one time. At least you couldn’t yet when we were there. I didn’t save all of my clips and they’re now gone. My biggest regret is not recording his entire reaction to the Radiator Springs Racer Ride. I only have a 10 second clip from the beginning and he gets angry every time he watches it and it stops since he recognizes the music from the other times he’s watched it. So if you document your Disney trip and want to save pieces of it I recommend you take your picture/video for yourself first THEN take one for social media purposes. 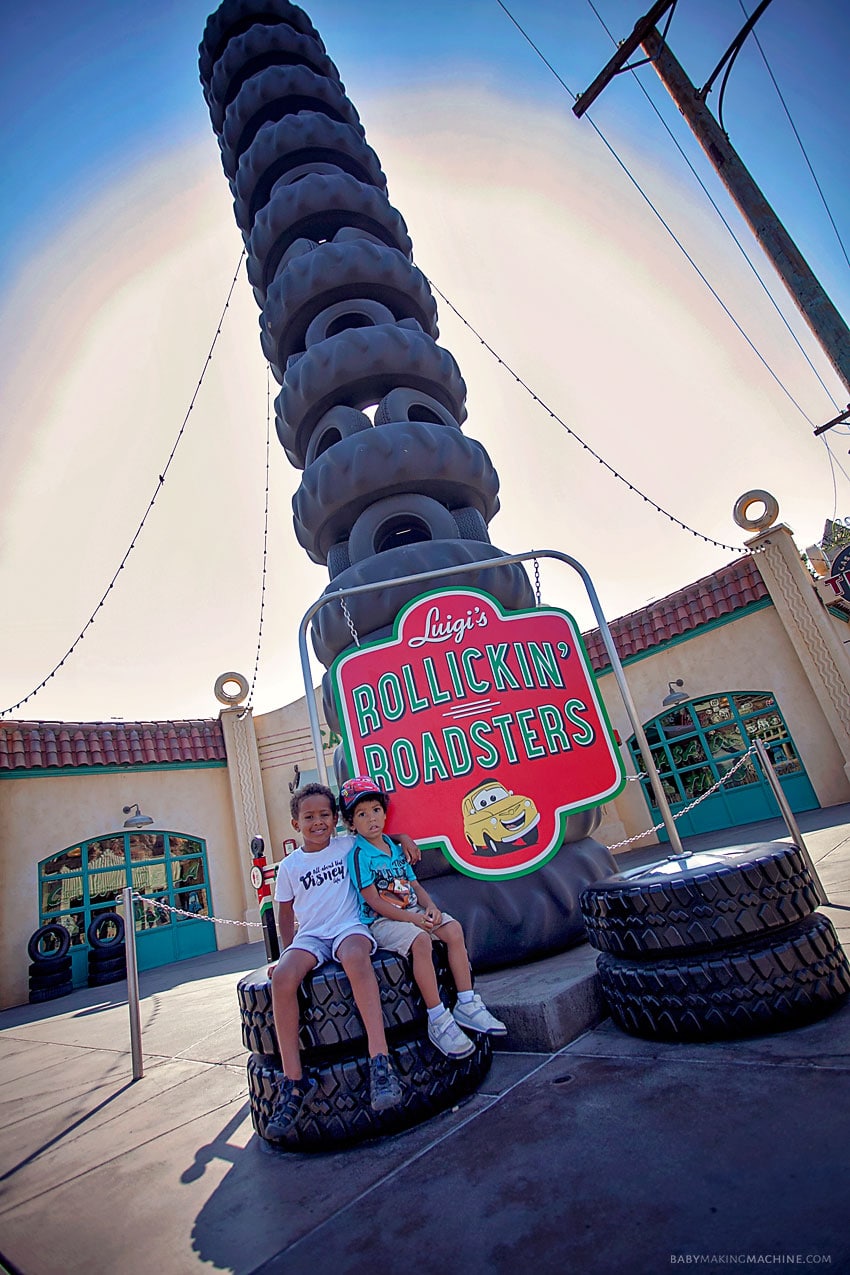 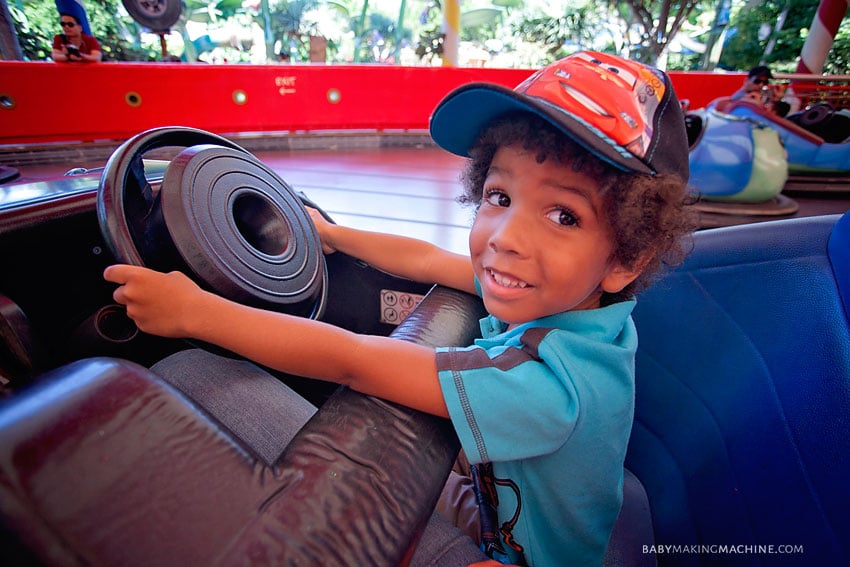 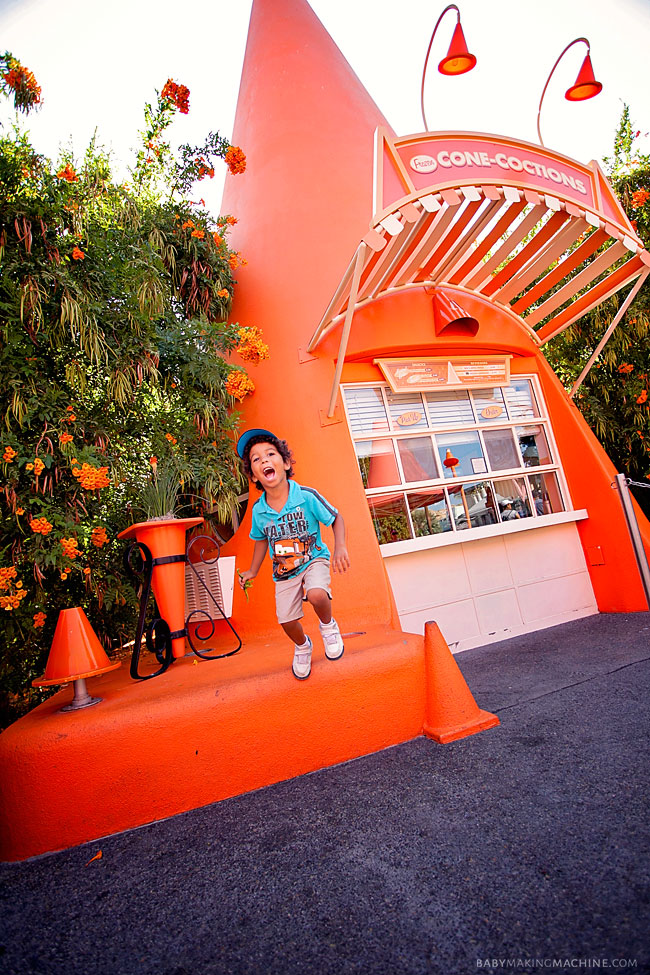 Despite mostly failing in the video regard, I got plenty of cute pics of my little guy enjoying our day together at the parks. He loves looking at the pictures and watching the videos and hasn’t stopped talking about our trip to California.

Then the next day on stage with my little guy I didn’t manage to pass my camera off but I’m hoping some of the photographers at the conference captured some of our special moment accepting our honor. 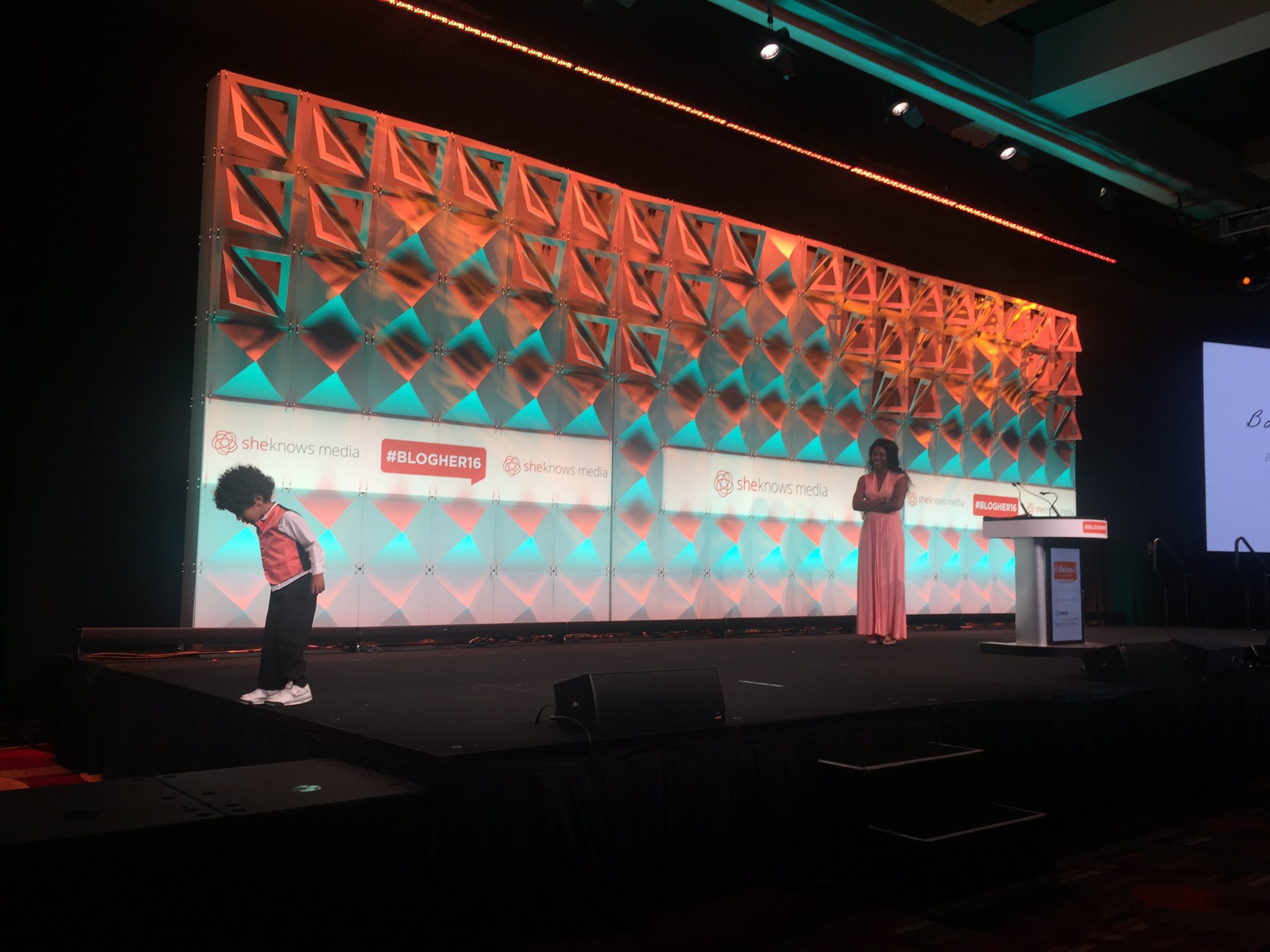 Leigh Ann Torres was sweet enough to snap a pic and tag me on twitter. I was watching my silly boy debate jumping off the stage while my video started to play.

Afterwards I took him on the escalators he’d been begging to ride all day and we went up and down for nearly an hour. He may have been just as happy as he was at Disneyland. 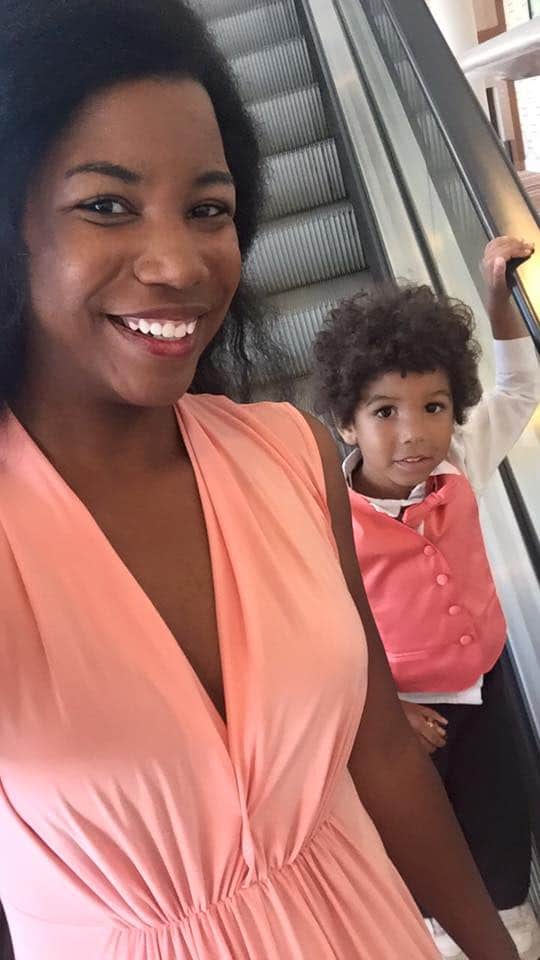 Even though all of this was just a week ago it already seems like a blur. Now we’re back at home, my kids united (and enjoying each other’s company after their time apart). I wish I could just freeze these special moments together. Just as special as the moments my son and I shared at Disneyland was the sweet embrace he had with his sister as we got off the plane. She grabbed his hand and asked him how his trip went and he eagerly shared. I recorded a quick video but again… On Snapchat which is now gone. GAH! 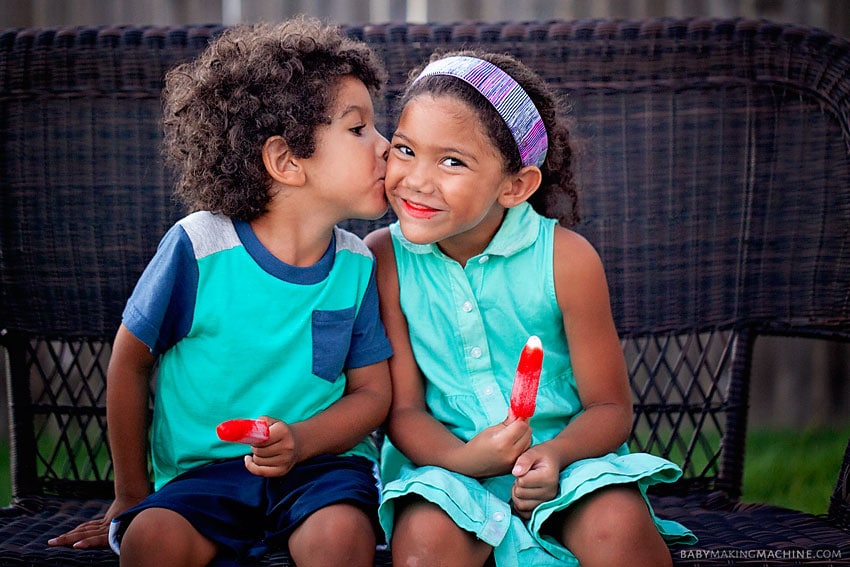 This whole weekend is an example of the moments I wish I could freeze and enjoy a little longer. From a mommy/son trip to seeing my two little loves enjoying a Popsicle together. Don’t me like me, remember to capture those sweet memories on your memory card, not just your Snap story.

I love cherishing the moments with our families and wish I could freeze so many, and I love brands that bring our family together which is why I partnered with Unilever Ice Cream and Mirum Shopper on this post. All opinions are my own. This summer stock up on your favorites from the Ice Cream truck with the buy 3, get 1 free in-store offer available at Target and enjoy some #FamilyFreezeTime of your own.

When you take 1 of your children there does the other one get upset? And how old is Big T? I’ve never been to any Disney park but I believe I’ll get to go to one some day.

Last year Big T didn’t really know/care that I was leaving him. This time I told Lil’ J that she would go on the next trip. We were planning to go to WDW in October but now we’re going to DC instead 🙂

You must have a great fun there in Disney land, isn’t it? It will be your unforgettable memory!
And what’s more, I love the bumper car there very much!

just amazing blog,,You must have a great fun there in Disney land,