Disney Pixar’s Inside Out: My 4-Year-Old’s Review

Last week Lil’ J and I went to see Disney Pixar’s Inside Out at a press screening. She’s my little review sidekick and now that it’s out we’re finally sharing our thoughts!

I won’t be posting any spoilers so don’t worry about that. She had been counting down for over a week to see it. The commercials just draw kids in I tell ya. It had her wanting some of the Inside Out merchandise that’s been on the shelves for months.

at the Disney Store outlet. I interviewed Lil’ J about the movie while she worked on it to give you her perspective. 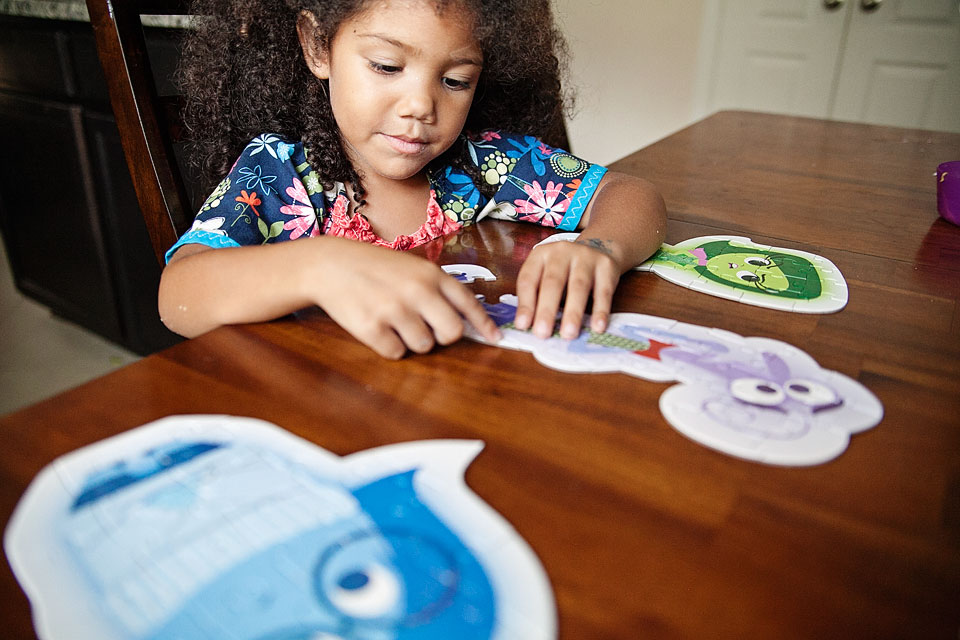 There was an adorable short film before the movie called Lava. I loved it but Lil’ J wasn’t impressed “because volcanoes scare me,” she said.

Here’s what she said about the main feature:

Mom: What was the movie about?

Lil’ J: They’re creature things, and they make a kid a kid, and her name is Riley. So one feeling that’s like ‘eew yuck’ and one’s joy, she’s happy, and ones scared and ones sad. Want to hear about grumpy? He’s the one that when he gets angry he gets fire on top of his head. Oh, and there’s an elephant one and he sings. Ok?

(The elephant actually isn’t an emotion but an imaginary friend)

Mom: What was your favorite part?

Lil’ J: When they were singing ‘Who’s the friend you like to see? Bing Bong Bing Bong!’

Mom: Do you think it’s a movie for grownups, that little kids should see it too?

Lil’ J: Three, or maybe four or five, ok? But no one [year-olds], no babies. Two is ok if he’s not a squiggly worm or anything.–I mean if they are hyper and don’t sit still–If they aren’t like a squiggly worm, that’s ok with me.

Lil’ J ranks Inside Out over Cars, Monsters Inc, Finding Nemo and even Brave. She however still likes Cinderella, Wreck it Ralph, Frozen and Frozen Fever (she wanted to be sure I put that in there) more. 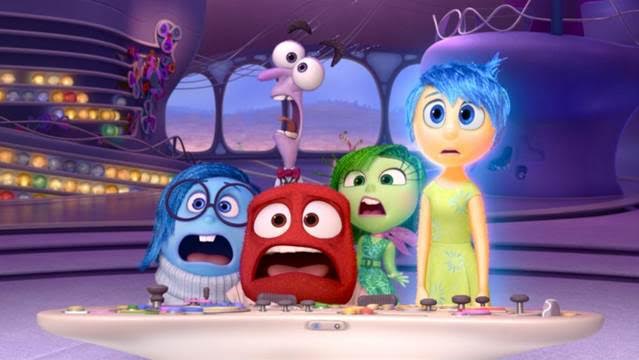 I should preface and say that I’m super critical of Disney Animated Movies because I always set the bar SO HIGH. When I expect too much I’m often let down. I’d heard so many high-praise reviews that I was expecting my mind to be blown by this movie. Kinda like that red guy in the middle, but in a happy way.

Since I’ve been keeping up with the trailers for so long, many of the funny scenes I had already seen, however there was still a lot of humor I didn’t expect that had me and the rest of the audience laughing hysterically. A lot of the jokes were geared for an older audience. I’d say maybe 7 and up.

I had an idea of the storyline from the previews but the movie ended up being even better and way more complex than I had imagined. Lil’ J was able to follow along for the most part, but like any other movie we see together, it sometimes takes a couple viewings to catch things she missed before.

We plan to see it again in theaters next week during the day, and of course we’ll be buying it on DVD.

One thing I really thought was awesome about the movie–Like many movies Disney Pixar produces, this film has a deeper meaning within the storyline. It’s been fun to use the characters from the movie to talk about our emotions when we’re working through them. Others have said it’s a great movie to bring awareness to mental illness and depression.

Having heard that before I watched it I think I went into it taking it a bit too seriously, but in the end I was laughing and tearing up anyway. Lil’ J was completely connected and concerned for Riley throughout the movie, and I loved every second of the film. It was awesome, nothing like we’ve seen before, and one I’m excited to see again and again.

Like Lil’ J I’d rank it above Cars, and Monsters Inc. probably even Finding Nemo. I wouldn’t rank it above Wall-E, Toy Story 3, or The Incredibles, but I suspect it’ll grow on me through the years like these have, and if you ask us, it’s definitely worth seeing, especially with your kids!

Do you plan on seeing Inside Out?

If your kiddos want some fun before or after seeing the movie, here are some activity sheets from Disney that I’ve uploaded for you!: Spot the difference game, coloring page, emotional door hangers and my personal favorite: Inside Out inspired nail art tutorials.

LOL about her talking about squiggly worm hyper kids. I took my kids to see Home a couple weeks ago in the dollar theatre. The last time I took them to a movie was about a year ago and it did not go well. I decided to try again though (they are 3 and almost 5). They each asked me a few times during the movie “I’m all done with the movie, can we go home now?” but I said no, and they luckily sad still and let me finish watching it… so I’d say it was a success! However I’m not sure I would take them to a movie again anytime soon because they obviously didn’t enjoy it They are more high energy and they like those 20 minute 3D movies they play at aquariums and stuff better lol. A full movie is just too much for them.

Ooooh my goodness Marie. So he brother is a “squiggly worm” so she didn’t want him to come, but he LOVES popcorn and he can sit and hold one of those tubs for at least a half hour. I want to take them both when we go again. Normally I try to pick a smaller theater and go in the morning but since it’s summer time I doubt any will really be slow.

Did you enjoy Home? I LOVED that movie! Loved loved loved. And I’m typically only a big fan of Disney so that says a lot 😉

dyibg over squiggly worm!! My J is currently scared of everything – would it be too scary? I was thinking it might be a good way to explain feelings?

I’m actually happy to hear that!! Can’t wait to see it!!!

My sister in law called me yesterday and told me not too take my 4 year old to it because it was too deep and would go over her head. I’m so glad you reviewed it because I still really wanted to take her! We’re hoping to go next weekend and I an’t wait to see it. My daughter has been watching the preview for it over and over and is super excited as well!

Ruby I’m so glad you found this and commented because I forgot to update the post. We saw it again on Monday and she loved it! She didn’t have any questions during the movie this time around and she got it a lot better. Her brother loved the short film before (Lava) with the music, and anytime someone sang, haha. But at 2 he isn’t into movies yet. But I bet your daughter will enjoy it. The characters are super lovable. Let me know what she thinks after you go see it!

Were browsing for activity sheet for children and found this post 🙂

It reminds me of this movie when we watched it last year. My 7yo like it so much, I agree that the movie has a deeper meaning within the storyline, but Disney somehow manage to pack it in one good animation that my kids watch it through the end 😀

PS:
Thanks for sharing the activity sheet, my kids love it!

As my daughter is closer to 11 than 10, and weirdly resembles the animated Riley, I had a front row seat to her experiencing the film and reflecting on how she related so closely to the emotional ride the movie’s character went on. I used up my popcorn napkins entirely…and not from wiping my fingers. It was excellent and deeply moving.

Awwww Romola that sounds so beautiful. I imagine watching that with my kids again when their older will have an entirely different effect on me.

Her response to Lava was very adorable. That was a very nice gift from her grandmother.

Isn’t she just adorable! I love conversations with the littles to get their take on things. I taught writing for 15 years and loved reading their thoughts, too. Our family had varying ideas on the movie. The kids loved and so did my husband. I didn’t like the idea that something inside your head controlled you…I rather the message be that you can control yourself, but I’m told that I completely over reacted to that! LOL! Disney always makes a great movie!

Love the conversation! And, I agree – no squiggly worms at the movies. We loved the movie, and we appreciated that the female character wasn’t a princess & played sports! Having two boys – sometimes they are hesitant to see Disney movies with female leads. . . It results in eye-rolling and, “ugh! more Princesses!”
And – I totally agree with Natalie – you do learn to control your emotions, rather than your emotions controlling you…..