Dear Diary: My Raw Thoughts on the First Day of School

Ok, so that wasn’t as glamorous as I imagined. I thought she’d be thrilled to pick out her school supplies. Sure, she thought it was kind of fun, but she wasn’t really interested in what her folders looked like. And the one she really liked was college ruled, not wide ruled. It wasn’t an all-out fail, but it wasn’t the experience of my dreams either.

She didn’t see any backpacks she cared for so she browsed Amazon while walking through the store and picked out her book bag and lunch box on Prime. There’s back-to-school shopping in the 21st century for ya.

So, she’s been counting down to the day she’d meet her teacher for about a week now. I took the kids to the park to play to help the day go by faster. 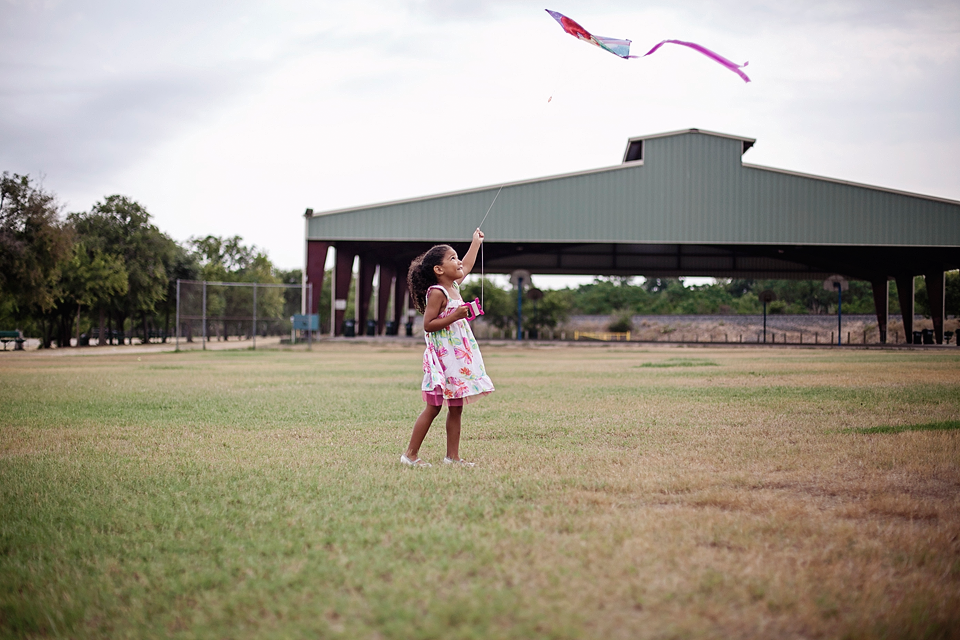 I didn’t know what to expect of her classroom and teacher. In my mind I pictured a bunch of tiny desks lined up in rows. It was much more cozy-looking than that. Several tables, where kids could sit together. J picked the table and seat closest to the front.

She introduced herself to her teacher and began to interrogate her: “What are we going to learn about in Kindergarten?” “All sorts of things? Well, what kinds of things? How many things?”

She introduced herself to a couple of her classmates. She didn’t seem shy at all. She was ready to get started.

When we got home and read the letter and schedule from her teacher she wanted me to explain every little detail. 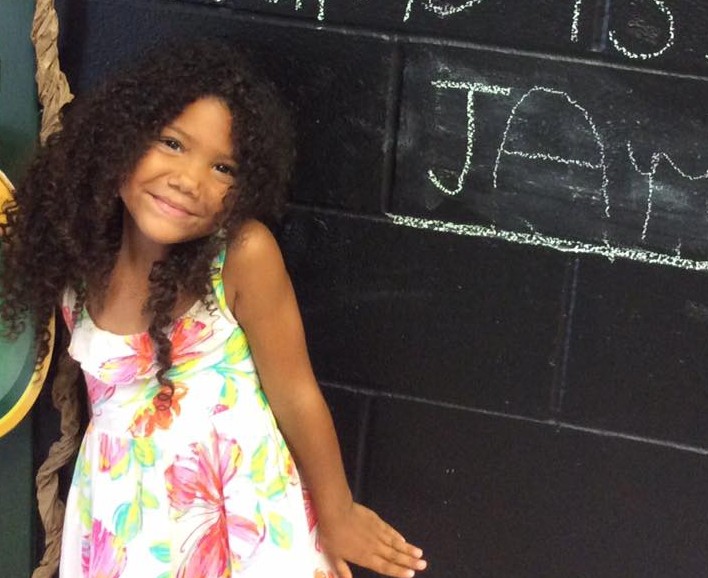 I counted 16 other names in her class. I’m glad it’s a small group. And her teacher seems so delightful. I’m really glad we made the decision to experience Kindergarten at this school J is so excited, she can’t stop smiling about it.

The countdown to the first day of school has begun. Just four more days.

We wanted to make this day extra special. I worked a half-day then we went as a family to Gattiland, or as J calls it “Daddyland.” Unlimited pizza and games is where it’s at. 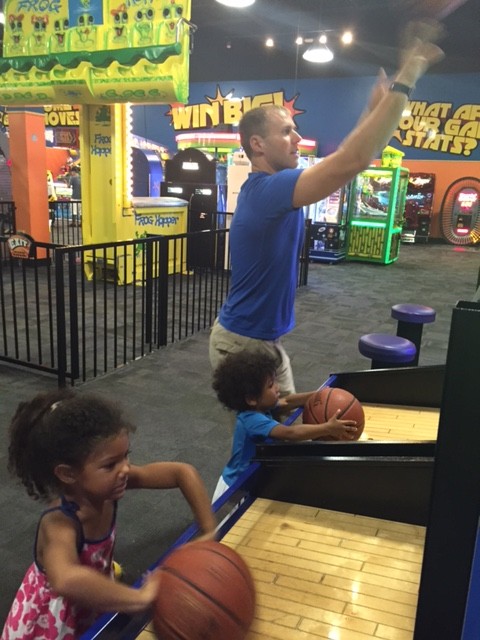 B and I neglected the kids for a few moments to play a game involving throwing balls at clown targets. He was convinced we could beat the high score. After trying half a dozen times we finally did, and won 500 tickets. Combined with all of our other close attempts we racked up over 1000 tickets and some incredibly overpriced cheap prizes that the kids quickly destroyed.

I’m excited to shop for groceries this weekend. It sounds dumb, but I plan to do it alone. Which means it’ll be awesome.

Her brand new outfit is laid out, her hair is detangled and wrapped, and she’s extremely excited for tomorrow.

She helped me pack her lunch which includes grapes, blueberries, ham, cheese, and what she’s most looking forward to–A bagel with strawberry schmear.

Once it was all packed she grabbed her lunch box, and acted out exactly how she planned to open her lunch and what order she’d eat it all in. I watched her do this about four times.

As we tucked her in at her earlier bedtime she offered to say prayer and asked Heavenly Father to bless her to be able to learn, listen to her teacher, and get “all greens” (which she remembered from the handout we read).

Her daddy gave her a sweet blessing and she went to bed with little argument.

Her daddy and I sat up talking about how fast our two awesome kids are growing up, and how we hope to spend even more quality time with them now that we’ll be adding school our busy mix.

My camera is charged and I can’t wait to capture her smiling face tomorrow morning as she heads off for her first day of elementary school.

Waking up wasn’t early… I mean easy. It was early. We were all pretty tired. I was up way too late writing and watching The Hunger Games.

My first mom fail of the day (well, second if you count staying up too late) was realizing in our haste and excitement, we forgot to put her lunch box in the fridge to keep cool overnight. The ham and cheese was not smelling so good.

I exchanged it for a fresh batch, and crammed an oversized ice block in her bag to try to keep it all cool until lunch time.

J woke up excited to get dressed. I styled her hair in a “braid crown” as she requested but I started the braids a little too high on her head. I didn’t have time to re-do it, but after adding a headband, she was very pleased with her style. 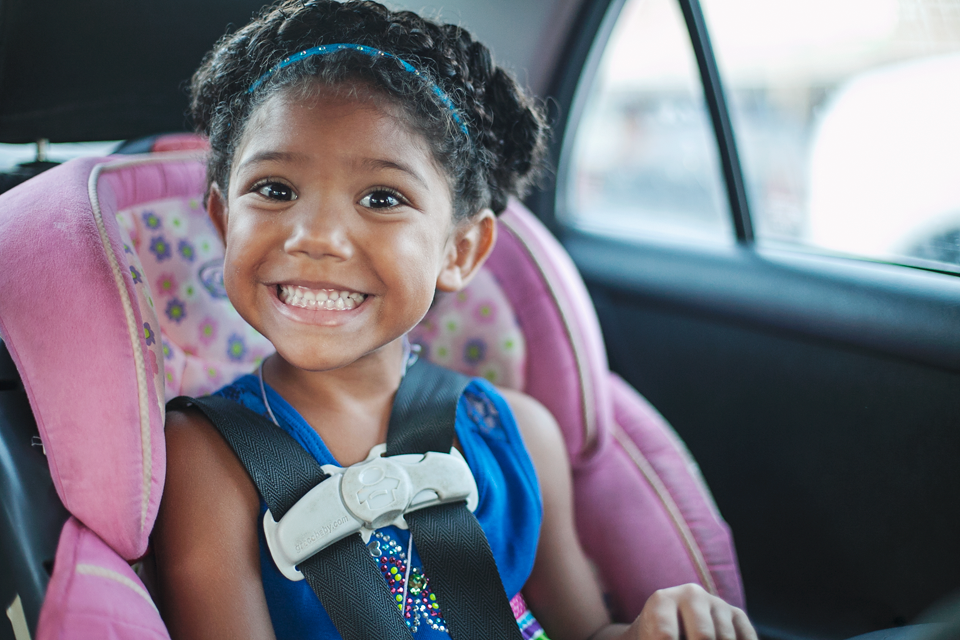 She put on a necklace she made yesterday, and grabbed the one she made for her teacher. We umm… forgot that one at home.

I grabbed my cameras (one for photos and one for video) and took the obligatory first day of school photos by the front door.

Next mom fail: In the car, when I switched to take video of our trip I got the dreaded “no memory card” alert. I was down to one camera for both photos and video. 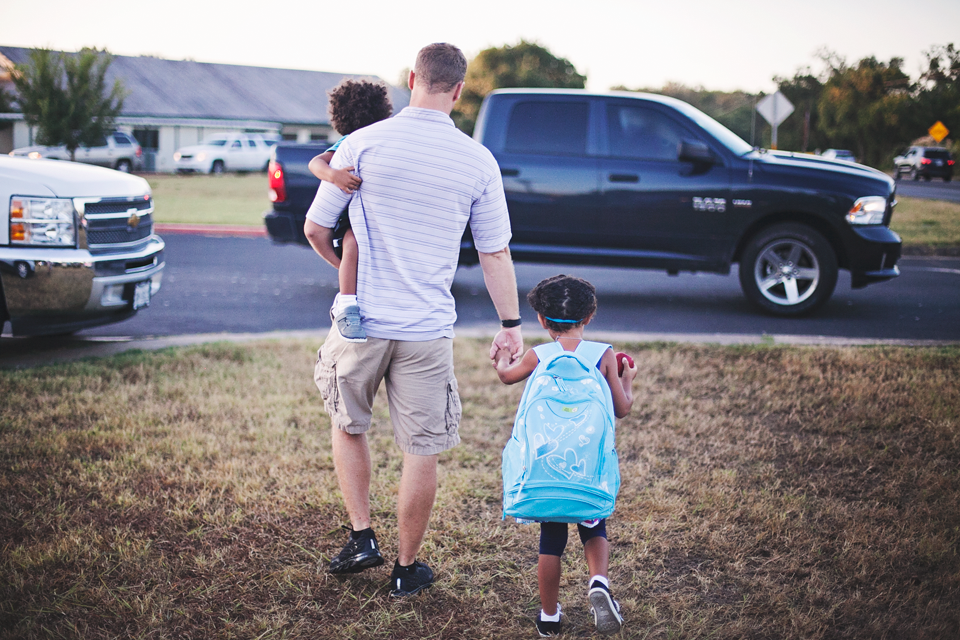 Remember how I was so excited she chose a seat at the very front of the classroom? Turns out that was the back. For a split second I considered rushing all of her name tags on the other end of the room but with B standing there, giving me warning looks I decided I’d better not. He later told me that he knew that all along and he tried to tell me. Well, he didn’t try hard enough. 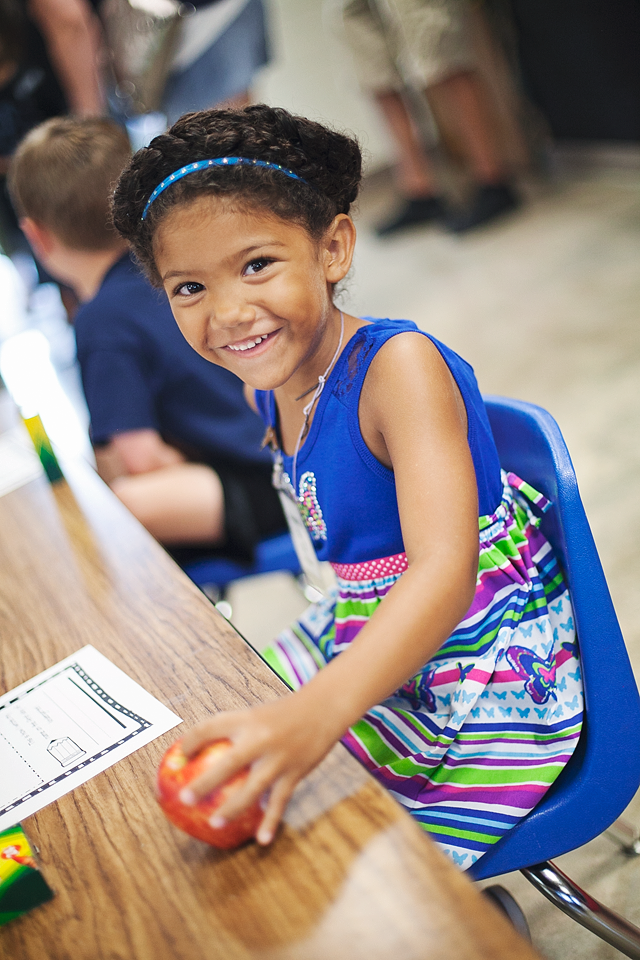 I gave her some hugs and told her we were about to leave. When she gave me a hesitant look I suggested she introduce herself to the little girl who sat across from her. That worked, and and waved us goodbye.

I also don’t think I cried because the reality hasn’t sunk in yet. Today was the first day, tomorrow will be the second, and so on. This is it for us. Waking up early wasn’t a one time thing for this special occasion. This is life now. Oh boy, now I want to cry.

I can’t wait until she gets home, so I can hear about her day. I told her to try to remember everything she does so she can tell me all about it. I’m excited for my baby girl, even though she’s growing up.

I keep checking her class’ Facebook page for updates on her day. I really wish they had a live-streaming webcam. Her poor brother didn’t know what to do with himself when we went to Chickfila without her. It was like he forgot how to play.

He keeps playing videos of her on my phone. Now I feel like I could almost cry.

Remember all of those things I couldn’t wait to do? I haven’t done any of them.

oh, it goes by so darned fast! I didn’t cry the first day for my daughter (who is now a first grader) but she is such an introvert that the next few weeks after she cried every day and then I put on a brave face u til she was out of the car and then I bawled my eyes out! J sounds more extroverted – hopefully it will be a smooth transition but they all wind up loving Kindergarten I think.

She is a doll! I’m sure the fact that she was so excited made it easier for both of you. I have one more year until my oldest is there, and even THAT is hard to believe! The time just goes too fast!

Such a sweet story! I hope she has the best year!

Sigh….why does it all go by SO fast?!? Love all the special things you did to celebrate and make back-to-school special. Such a good momma!

She is just adorable and brave! It must be great that she was so excited and ready.

This is so cute! I’m sure when little J is older this will be a great post she’ll be able to look back on with fond memories.

Kindergarten is a big deal. We had a bit of a rough transition despite being in daycare for years. But my son is…difficult. First grade was way better, though, because he had an amazing teacher. Waiting on pins and needles to start in two weeks and see how this year’s teacher seems. Oh, and a couple tips…First, beware that she might be VERY tired in the evenings for a while! Not sure what it is about Kindergarten, but it sucks the life out of them so much differently than Pre-K! Also, instead of an ice pack, you can always use their beverage to keep the lunch box cold. If you do juice, I freeze juice boxes and put one in the fridge the night before so it’s slushy in the morning and can still cool the lunch box pretty well. If you’re just doing water, I’m sure a water bottle with half water-half ice would do much the same. Sometimes it’s easier than worrying about them throwing out the ice pack or whatever…but I have a BOY, so that’s probably more of an issue on my end! 🙂 Hope the rest of the week goes well!