Dad’s can do hair too!: He says/ She says

I was rushing out the door to work when my husband stopped me with an urgent request.

He says: “Hey can you do her hair really quick?”
She says: “What? Just take her pick tails down and add a bow.” I had styled her hair the night before so it was just a matter of unraveling the braids.
He says: “Can you just do it please? I don’t know how.”
She says: “Just pull it in a pony tail.”
He says: “I can’t do that!”
She says: “Oh my gosh you REALLY need to learn how to do her hair.”
He says: “Uh uh.” (nope)
She says: “Well what if I die, are you going to let her go around looking raggedy?”
He says: “No, I’ll figure it out.”

Yea right. I don’t believe you. And I’d rather not be lookin’ down at my daughters mess of a head if that happens. 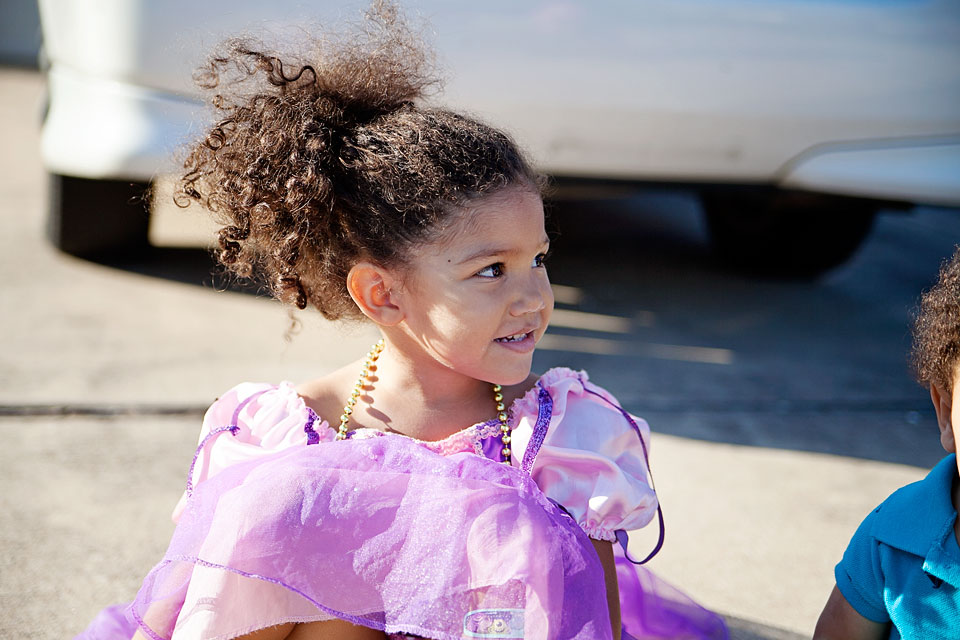 I saw a friend on Facebook post that her husband knows basic hairstyles for his daughter: A pony tail, pig tails, and side swoop with a hair clippies. She asked if this was a normal dad thing.

Not in my house.

My husband can’t do any of that. Absolutely clueless, and any time I try to give him a lesson he doesn’t pay attention long enough to replicate.

To his credit he has attempted the “add a headband” option, however it’s usually something that doesn’t match and it’s not positioned correctly. Are men really incapable of doing hair? If my husband in the minority or majority?

Maybe he’d be more comfortable with this ponytail technique.

That’s too funny.
After we found out we were having a girl, one day my husband said out of the blue, “Well, I guess I’m going to have to learn to do girl hair.” I thought it was cute. He tries but the most he can do it pull it back with a clip out of her eyes.

My oldest wears a faux hawk and my husband can’t even do that. I would be completely impressed if your hubby could to your little girls hair! 🙂

He used to at least wash and condition it when her hair was shorter. But now that her hair is near her waist when wet he doesn’t even attempt it. I guess I’ve gotta help his confidence.

Same here, my husband can’t do my oldest daughter’s hair because of it’s curliness. Daughter #2 has a looser curl and he’s only slightly better with hers. One Sunday while I was getting ready for church #2 decided she wanted to wear a headband like #1, so she brings it to me. Since I was still getting ready, I told he to take it to daddy and have him help her. I should have known better, here is the result: http://flickr.com/gp/28040326@N07/r2rN6u, all she’s missing is leg warmers and a leotard and she’ll be thrown back into the 80’s.

My daughter doesn’t have enough hair yet to really “do”, but my husband has attempted to put clips in from time to time with mixed results. I can kind of see how it would be hard for them, I mean if you think about it we have been doing our hair our whole lives so our fingers kind of “know” how to handle hair, but men generally have never really had that experience, so moving their hands like that is pretty foreign to them, I compare it to a toddler learning to maneuver a fork, lol.

That’s a really good point! I did my sisters’ hair growing up. I’ve had a lot of practice.

Puleeze…My husband cant seem to get our boys dressed without them looking homeless, I could only imagine if we had a girl what he would(n’t) be capable of!

My husband acts as if he has a “hair allergy”. He wants no parts of it and then has the nerve to not properly match the clothes right. It’s as if when he goes in the kids’ room he automatically gets color blind. But don’t let his Jordans not match his clothes, ooohhh nooo that’s sacrilege.

Hahaha. Maybe it’s so we don’t ask them to help again. I will set her outfits out the night before and he’ll still manage to put them on backwards. Bless his heart.

I have 4 children, my husband does not do hair. After getting a brush tangled into our oldest daughter’s hair about 9 years ago, he won’t even brush it. Our girls owned several hats before they were old enough to do their own hair. Be thankful, it wouldn’t trim out well for any one involved, and buy that beautiful girl a hat like o e of daddy’s in pink.

I totally agree with Jessica E. I think it really IS foreign to them and we just need to accept that “Dad’s are doing the best they can with what they have to work with”! We start when we’re young “doing hair” on our baby dolls, so by the time we’re old enough to do our own (or a child’s) we’ve already had YEARS of experience. :c)
BTW< I was about to share that SAME video with you! lol

So funny and cute thanks for share reminded me of my ex and our daughter but I must say he did learn and actually to his credit did pretty well.

thankfully claudy can do hair. he can braid (for whenever we have a girl) better than i can, and he is the one who cuts carter’s hair and styles it. thank goodness!

When I had hernia repair surgery in May, I could barely stand up, let alone bend over to do my 2 yr old’s hair. I just kind of assumed that she would have crazy hair for a few weeks. I knew my husband could learn to brush it, and that would probably be about it. He shocked me and day one, she had a NEAT ponytail (no bumps!), and a bow that matched her clothes!!! This continued all week long, and one day he even did pig tails!!! Who knew!? I promise no one ever taught him, it was his first time. I guess he learned by watching me do it? Now I have him do her hair whenever I am running late or it’s his turn to dress her with no issues. 😀 I don’t know if that is normal but I am so grateful that he does it!

When my daughter was 3, I had to go on an overnight trip with my students. When I got back, one of my neighbors checked in on me because she had never seen her hair look that bad and thought I was sick.

I keep trying to teach my husband how to do our older daughters hair, but he really has a hard time with the curls. He can pull it into a pony tail, which is better than nothing I guess. At least he’s happy to do our younger girls hair – it’s straight, so he can handle that a lot easier! We’ve totally had the “what are you going to do if I die!” conversation about her hair!

My husband will not touch our daughter’s hair. He says it is intimidating. Hopefully nothing ever happens to me because he would have to call her nanny to comb her hair. 🙁

My husband says he can’t get our 5 year old daughter ready for school in the morning because he doesn’t know how to do her hair. In his defense, she has very unusual hair that requires more than just brushing (i.e. ponytail, barrette, etc) to make it look halfway decent, but still…it’d be nice not to have to get up at 6:30 every morning 🙂

My husband has to get my daughter ready in the morning because I need to be at work so early. Therefore, he has had a lot of practice and he went from just placing a cute headband to actually putting her hair in ponytails. I even blogged about it because I was so proud.

My husband is the work at home parent with our kiddos. I have a 3 year old daughter and a 7 month old son. He CANNOT do her hair!! It drives me nuts when I come home from work and it is all hanging in her eyes so she can hardly see! He does manage to brush it (usually) but that’s it. And her hair is just about as straight as it can be. Although in his defense it is super fine and silky so if it isn’t wet it can be hard to get up. But come on! At least put a hair band in or something! I keep trying to get him to practice and learn but you would think he is allergic or something. I have seen the vacuum video before and am totally tempted to get him to try it out–at least her hair would be up!