How I convinced my husband to do a vlog

Few things have been as difficult as convincing my husband to have a baby, and then another. Having kids is a big deal and scary, I get it. Some people just need a little extra love, encouragement (and a little coaxing) to take the plunge. I wouldn’t ever dream of convincing him for a third. For one, I don’t think I can convince myself, and two, I’m pretty sure not long after the pee dried on my positive pregnancy test, he looked at me and said “you’re not convincing me again.”

That may sound a bit harsh. You’re probably thinking my husband doesn’t like kids, but that’s not the case at all. He’s a great dad. He adores our children, and is more protective of them than I am. He loves them more than anything, and the way they play, while totally different than the way I play with them, is freaking adorable.

My husband can be squirmy about photos, and videos, especially videos. I once asked him to record a vlog with me and he told me absolutely not. I tried to negotiate but he wasn’t budging. Convincing him to do a vlog was about as hard as convincing him to have another baby would be.

Lately I’ve noticed he’s become less uptight about being in picture. He didn’t even whine when I scheduled our family photos this year. Not only that, he recently ASKED me to take pictures of him and the kids. Cue the flying pigs. 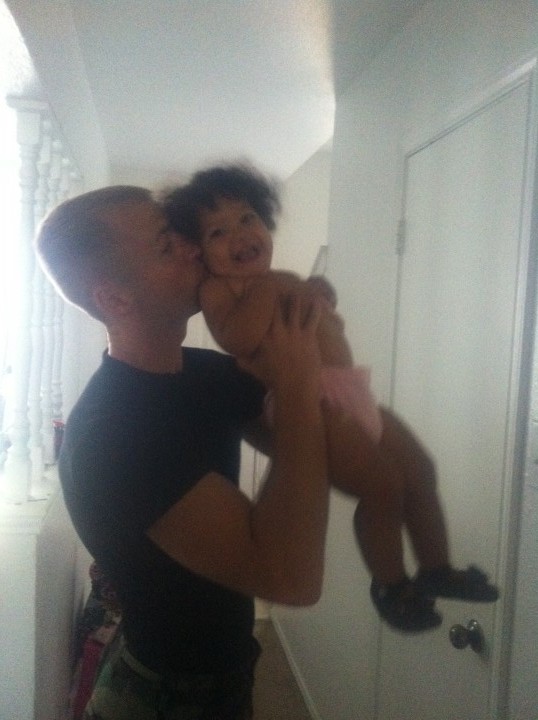 I think he’s realizing how much he enjoys looking back at the photos of him and Lil’ J when she was young, and realizing how important it is to get in the picture and be a part of the memory. So I’ve been taking it upon myself to snap pictures and videos of some of the cute things he does with the kids. One of which is taking Lil’ J sledding.

When they were getting set up one day I pulled out my cameras and told him I wanted to make a video.

To my surprise, he didn’t argue with me. I recorded them then edited this little video and showed it to him for approval.

“It’s cool,” he admitted. “But you should wait until winter to post it.”

I couldn’t wait until December, but a cold front came through and I saw some friends posting about snow in other parts of the country so I figured it was close enough now. Waiting a couple weeks to show off my new favorite video has been hard enough.

Here’s a little back story. Lil’ J loves to go sledding with her daddy; in the summer, here in Texas. Don’t get it? Watch the video. And if you like what you see subscribe to my YouTube Channel. His birthday is this week and I think we may incorporate this into his gift somehow.

Three cheers for my hubby being a good sport. Maybe if he sees how many fans he has he’ll let me do more. Eh eh?

Haha! I sorta wish the sled were big enough for me 😉

That is so cool! Thanks for sharing!

Thanks for watching and commenting Lori!

Can’t tell you how much I love this video.

So cute! Ha ha ha. I’m all over-protective mama over here, worried she’s gonna fall! But look at her having a blast! … I have to sneak pics/videos of my husband or they won’t happen. It’s gotta be a guy thing…??

Totally was thinking the same thing! So adorable, but don’t think I’d trust my squirmy kids on that thing! lol

Adorable!!! Your daughter will look back at these clips and love them!

Take a look at this very insightful information that’s aimed at lending a helping hand to all those about to head off on some travel get enhanced value and save right now a lot of effort in tracking things down!

Thanks Sarah! I hope she does!

Haha!! It probably is. I occasionally meet a guy who likes it but it’s so rare!

Yes! I was tired just filming them. Lol

Haha!! Yea I think we’ll put a helmet on her from now on. Just in case. But oh she loves it!

Nothing like a little daughter-daddy time that involves getting in a good workout. Kudos to your husband for being a good sport.

Yes, he was definitely tired when done. haha!