Yesterday I was talking to a woman when I noticed a stack of cloth diapers beside her. I asked her if she cloth diapered and she told me she did. I told her I did as well and it opened up a whole slew of other conversations.

I’m finding the same thing happens at church and yoga class when another fellow cloth diapering mama, or a perspective cloth diapering mother notices one another. It’s a sort of instant comrade among women.

A few people have recently asked me if we’re still cloth diapering. I guess because I don’t mention it as often, or post a gazillion pictures of her in solely a diaper, people aren’t sure if I gave up.

I say surprisingly, because really, it’s a big surprise, mostly to me.

What started as an experiment has become a lifestyle for us. 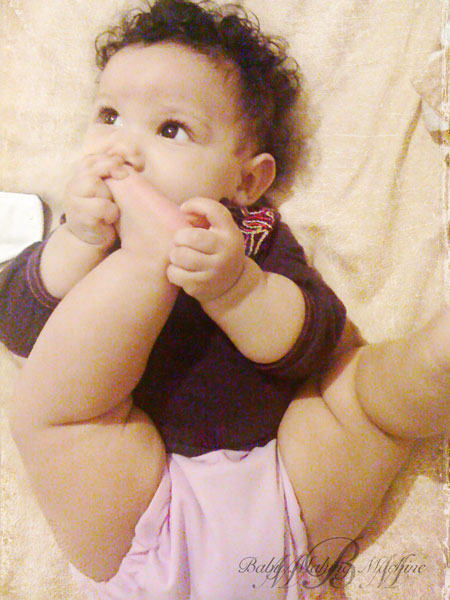 My mother-in-law came to visit us last month and happily changed Lil’ J’s cloth diapers, and told me something I didn’t know–My husband wore cloth diapers. Who would have thought? I believe she made have even made them, if I’m remembering correctly. Now I’m not that domestic (yet) but I am doing a lot more laundry now, which is a big step in my domestic diva development.

My husband (the champ) is cloth diapering our daughter right along side of me and we’ve come to find a few things that are making the experience much easier for us.

For one, the smell I mentioned in my frustrated post about in my temporary break up with cloth diapers post, has been eliminated by using some stuff called BioKleen in the wash during the pre-rinse cycle.

That’s the other thing. I gave in and added a rinse cycle before the wash like many recommended. It’s helped with the smell tremendously. Actually there is none now!

We have enough diapers to get us through 3-4 days but we usually wash every 2-3, or once the pail is full. My line drying stint is over. I gave that up after one try, and we’ve just decided to eat the extra water costs. Our bill seems to have leveled out to be about $15-$20 more than we were spending before and we are doing 12-18 extra loads of laundry a month so it’s more work, and we’re not saving tons and tons of money, but it’s second nature to us now.

My daughter’s poop has gotten more solid so I followed some friends’ recommendations and bought flushable (like, won’t flood your toilet flushable, I’ve tried it and they are SUPER thin) liners to go in her diapers. Problem is, I put them in when she pees and forget them before she poops. We’re still trying to get the hang of them and remember to put them in every diaper change. I’m also going to invest in a diaper sprayer to spray off pop in the toilet. And we got some wool dryer balls courtesy of The Willow Store has cut back on our drying time, and saved energy as well.

To be honest, I didn’t think we’d still cloth be diapering. My daughter didn’t get rashes with Pampers. We weren’t spending a lot on disposables, I’m not the most eco-conscious person around and I don’t think using cloth diapers make us “better” than anyone else. I will say that if I can do it, just about anyone can! The first month was rough to get used to our system, but now, it’s second nature. It really doesn’t take any thought to using cloth diapers 24/7 just like we did with disposables. In fact, it seems just as easy. NO LIE! But remember, this was after 2-3 months. If you’re considering them check out my article 7 Reasons to try cloth diapers on Baby Center.

I’ve been using Sprout Change diapers as well as FuzziBunz and gDiapers mostly. I also have a couple random other brands but those three are my favorite so far, for sure (in that order).

I like spreading the word about Sprout Change because they’re an up and coming, mom-owned and operated cloth diaper company. I think the mechanics of their one-sized diapers are most efficient and I love that they are the only reversible cloth diaper out there!

I intend to cloth diaper our next child, and hope to use many of the diapers we have now. The bad thing is, many of the Sprout Change diaper covers I have now are purple and pink in assortment. The SweatPea, Smoothie, Grapefruit, they are all irresistible. I have a few gender neutral ones but will want to grab a few more. They’re about to release a great new batch of gender neutral colors in a highly requested chocolate brown on one side. Since I have enough inserts I’ll be splurging on some more covers and I’ll be sure to get some of these that can go with a lot, and lucky you can win one! 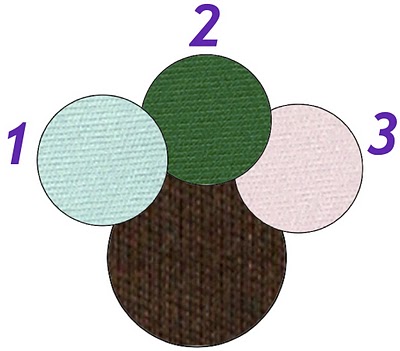 Sprout Change is looking for name ideas for their new diaper covers. They’re reversible, so one side is the chocolate brown and the other is each of the above colors. Leave a comment with a name idea for one of these new diaper shells and one *UPDATE*… THREE winnerS will get a free Sprout Change Shell (one winner for each new color)! Try to keep it food/health related like their other colors if you can. Here’s an example… For number 3 my suggestion is Vanilla Bean.

#2 could be grassy meadow.

I keep thinking Wheatgrass for number 2. Which is strange – I’m not into wheatgrass at all!

For #2 I’m coming up with either Mint Chocolate Chip Ice Cream, or Grasshopper Pie… Being preggo and craving mint, I guess that’s what comes to mind 🙂 I did notice their colors seem to be more nature oriented, so maybe just Mint would be better…

I’ve never used liners, but when DS’s poop became more solid, I coul dmostly just flip it off. It was just that in-between mushy, sticky (gross, sorry) stage that gave me trouble!

I still love my cloth as well. I use the thin flushable liners as well, but I’m still not a fan of poo. We only use ours at home though. I’m just not brave enough to venture out with him in cloth.

I think the green should be mint chocolate. And the blue. Hmm. Summer sky?

Can you tell I’m not real creative!? Ack! At least I tried.

I also use cloth diapers on my 7 month old! We have settled on the flip inserts with some flip covers and some Thirsties Duo Wraps… I like the flip inserts a lot though! We have the Kushies Biodegradable liners and I like them a lot! One thing I like about the Flip covers is that they have a disposable liner insert option (similar to gDiapers) that would probably fit in a Sprout cover if you need it!

I love the Sprouts and may try them in the future!

Those do not quite fit in with the fruity theme but they work with the colors! Does that count?

2. Green Bean & Cocoa Bean 🙂 I love my cloth diapers! I use FLIP and it has been pretty easy! Thanks for the tip about Biokleen, I’m going to have to try it because I have noticed that the inserts have a weird smell to them……. And I have a diaper sprayer and I LOVE it. My son has been on an antibiotic for an ear infection and he has had diarrhea and there is NO WAY I could clean the diapers off without the sprayer!

I’ve been following you for a bit now, and this is my first time commenting.
I love the bumgenius pocket style as well as the flip covers. We use a regular pre-fold in the flip covers, though other inserts would work equally as well.
Instead of a sprayer for the toilet, I bought a long one that attaches to the shower head. I still rinse off in the toilet using the shower head sprayer…it was a bit cheaper than buying something special for the toilet and seems to work just fine!
As far as washing goes, I’ve been doing laundry almost every day, and if I can’t, I just put them in a pre-soak with a little oxygen action. I haven’t found that it has decreased the absorbency at all, and none of my diapers are stained!

1. ?
2. Brussel Sprout
3. Moonpie or Ice Cream Sandwich
We have registered for G Diapers and are looking to try out a few other brands when the Bun arrives. I love hearing about your experience. Hopefully we can stick it out.

I don’t have a name idea, but rather a question. Do you use them at night too, and if you do, what brand do you use for nighttime diapers?

Megan, at night I use either a Fuzzi bunz pocket diaper with 2 microfiber inserts, or a Sprout Change shell with 2 hemp inserts (with a fleece liner so she doesn’t feel wet). 🙂 Hope that helps some!

For #3: Cotton Chocolate! (like a chocolate flavored cotton candy) Yum!

1. Chocolate Berry (or Berries)
2a. Mint Cocoa (my 1st thought was Avocado or Kiwi but others already said it before me)
2b. Sugar Snap Peas
3a. (on my computer #3 looks pink so not sure if pink or white) Chocolate Coconut
3b. Chocolate Macaroons

Glad you stuck with it, it is second nature to us as well now – like brushing teeth!

I have to go with Strawberry Shortcake for the pink one. And I like Snap Peas for the second (darker) green one.

Oh, also thought of a couple more names for number 1:

This is so lame but I want to win the Shell, so…

I love Sprout Change and I’m glad to hear you’ll still cloth diapering. I’m delighted to hear that they’re coming out with a chocolate cover… seems to be a favorite color for most.

My thoughts about names (in reverse order)

#1 the blue and brown…Twilight Mountain? I have never heard of this brand…I love trying new diapers out…hope to try this one! Thanks for the chance

I love that you’re loving cloth!! It’s really become 2nd nature here & I had to buy a few ‘sposies & was clueless what size to get–since we use lots of (better fitting than ‘sposies) one-size diapers here.

i didn’t see when this ended. i might have missed it? but i’m still going to enter. if i’m late, then its just for fun =]

Thanks Jen.
I’ve taken the plunge and have purchased my cloth diapering supplies for our first, arriving in October! I’m using Sprout Change. I had a strong feeling that I wanted to go that route in the beginning, but your reviews of this particular brand helped me narrow down and make my selection. Love your blog!

Hi! I checked back in on this post as a reference since I am contemplating the switch from disposables to cloth for 21 month old #2 and upcoming baby #3… Any further wisdom/updates to share now that you’re on baby #2?