Breaking the Baby News to the Big Siblings

In the first days and weeks of finding out I was pregnant I kept the news closer than usual. I told my husband of course… Immediately. Actually, I was out of town working when I found out and I first told him in a text message (more on that later).

There were a lot of things complicating matters in the beginning… And IUD, X-rays, the flu. There were several times when I honestly didn’t think the baby would make it. So I didn’t dare tell my kids and get them all worked up for nothing.

After a few weekly appointments and a sigh of relief from my OB I finally felt ready to tell my kids.

I went back and forth on exactly when to tell. At first I thought Christmas would be perfect. I’d be 12 weeks along and I knew my daughter would be just delighted. But after chewing on that for a bit I decided I wanted to spill the beans sooner. I didn’t want the news to be overwhelming or underwhelming. And I was lacking a feeling of excitement I knew my daughter would bring instantly.

A big sister (again) shirt? A necklace or book revealing the surprise? I couldn’t decide how I wanted to tell her. An idea came to me one morning when I was looking at old ultrasound photos stuck to the side of my fridge. I grabbed a strip from each child and brought them into the living room.

I set up my camera to record her reaction but at the last moment decided to put it down and just be in the moment. Besides, her reactions to surprises lately aren’t as dramatic as I picture them to be.

“These are ultrasound pictures,” I told her. “Those are babies when they’re teeny tiny, in my tummy. Can you guess which one is you?”

There was really no winning this game. Each ultrasound picture was of an 8 week fetus.

She pointed to the picture framed on the far right. She was correct.

There were two left.

“Can you guess which one is your brother?”

She looked at both and pointed to the one in the middle. Right again!

She studied all the options again and pointed to the third “But who is this one?”

“That’s the baby in my tummy right now,” I said.

She looked down at my stomach then back at the picture.

“There’s a baby in your tummy right now?”

“Are you kidding?” She asked with hesitation.

“No baby, I am not kidding, there’s a tiny baby in there.”

Just then my husband called. He was out running errands with our son. As soon as I answered my daughter asked to speak to him.

“Daddy, mommy said there’s a baby in her tummy is that true?” She asked.

“Ooh, what do you think?” He asked. But she wasn’t having that.

She picked up the ultrasound photo and examined it closer while I finished the conversation with her dad. I saw a smile spread across her face.

“So this is why you’ve been having so many doctors appointments?” She asked. “And why you said you couldn’t get too sick with the flu?” She was putting together a slew of puzzle pieces all at once. 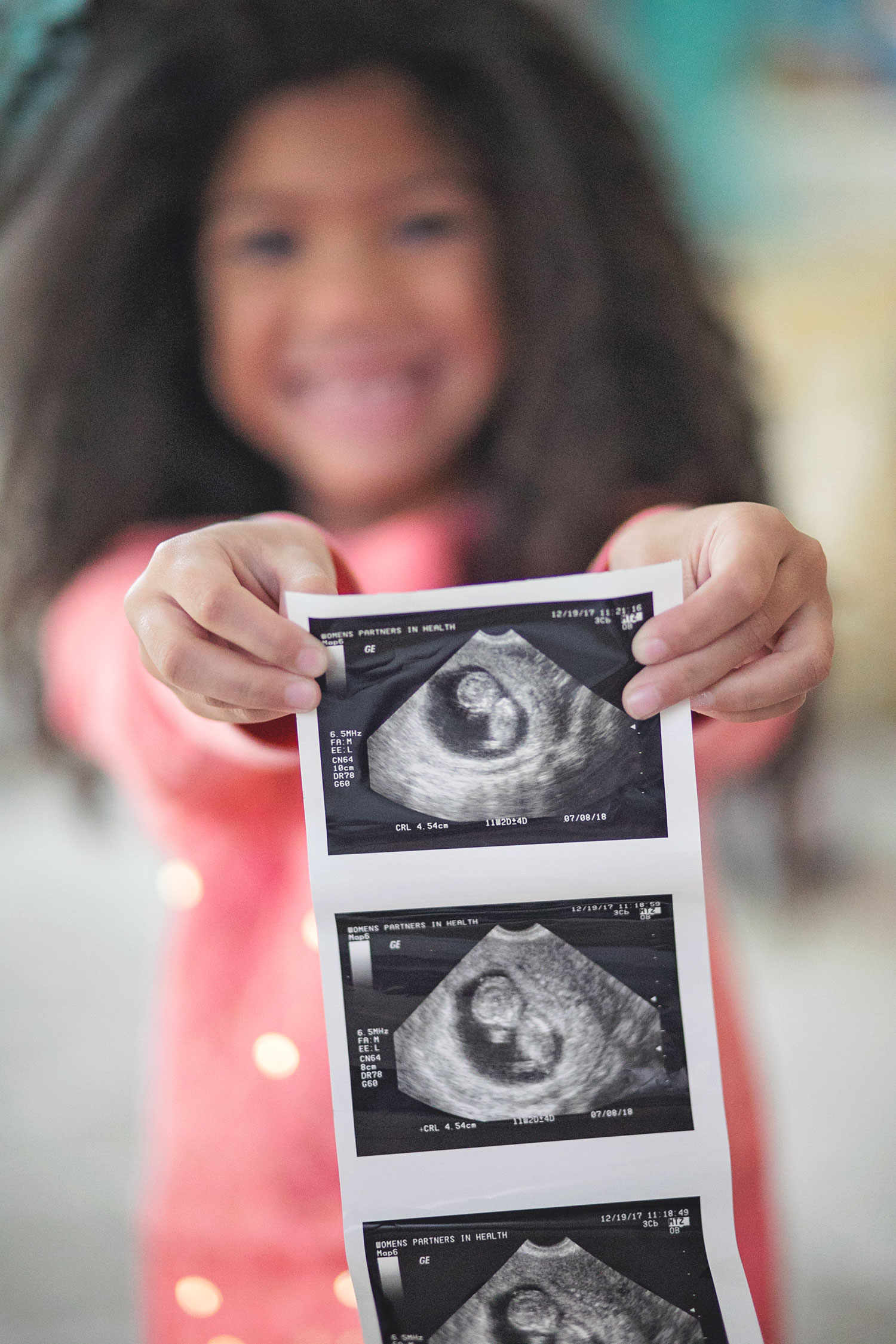 Her excitement grew by the minute as reality set in. She was going to have another little sibling, and she was thrilled.

“The baby is still really little,” I tried to explain. “And we aren’t telling many people yet because sometimes babies when they’re really little they don’t grow big and they die before they’re born.”

These may sound like harsh words but she took it well.

My husband has spoiled me by picking up whatever craving I desire any given day and my daughter will go above and beyond doing anything and everything for the sake of the baby. Sharing her snacks, encouraging me to take naps when she thinks I look tired, she’ll even eat her veggies if she thinks she’s being a good example for the baby in utero.

As I had hoped her excitement is infectious. When I went away with my husband for a few days for our anniversary, panic began to sink in again. But as soon as we returned home to my eager daughter who immediately hugged my growing belly, the freakout antidote kicked in.

Every Thursday she reminds me the baby is another week old and she asks to read the BabyCenter update and look at pictures of how the baby looks now. She reminds me to take belly photos and helps me set up the photoshoot and gives me ideas for pictures. She is already this baby’s number one fan.

On Christmas Eve she set out a special stocking (she got it at one of her cheer competitions) for the baby and asked me if I thought Santa would bring anything to put in it. I shrugged (knowing he wouldn’t) and figured she wouldn’t care once she saw all of her presents.

On Christmas day she asked about the baby’s stocking several times.

“Did Santa take it? It’s not hanging up anymore.”

When she didn’t drop it I acted quickly and grabbed the only baby items we have right now. It was actually a gift I’d received just a few days before from one of the brands I work with.

I stuffed the tiny bear and baby onesie in the stocking and handed it to my daughter.

“Look what I found!” I tried to play it off.

Her face lit up but I misread it as recognition of the gifts and told her that I put the items in the stocking. Her smile faded.

I started to say yes and explain why but when I saw it wasn’t helping I changed my story back.

Like a switch her face brightened up again and she ran to show her dad and grandparents what Santa brought for the baby. 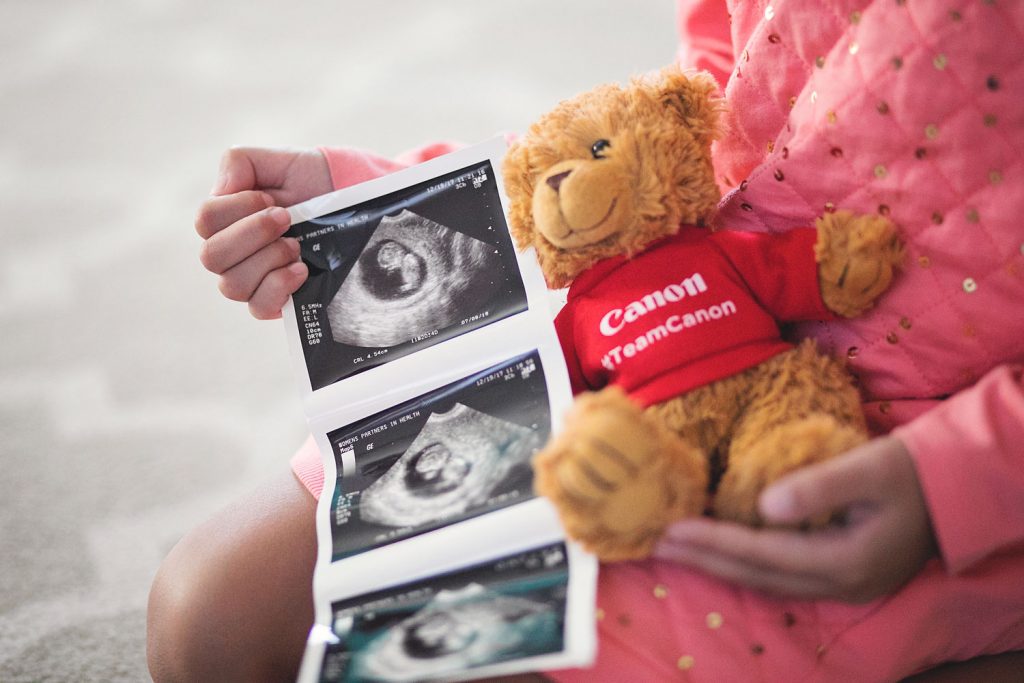 My daughter made a little cubby in her room where she’s collecting items for the baby. She put the onesie and some blankets in it so far. She’s decided she’ll share the bear with the baby. For now she sleeps with it and carries it around with her just about everywhere.

She is constantly throwing out baby names, asking how I’m feeling and telling friends she’s getting a baby for her birthday.

We told my son the news as soon as he got home and though he didn’t understand to the extent that my daughter does, he definitely grasps that there’s a baby in my tummy that’s going to grow and get bigger and eventually come out to be his brother or sister.

He says he’s excited to be a big brother and he’s hoping it’s a baby girl (so she doesn’t want to share his toys).

Both of them are excited about the baby, but especially my sweet big girl. She has been such a shining light in this pregnancy. I’m still freaking out but she’s constantly reminding me the joy children bring and how much love they share between each other. I honestly don’t think this kid could have a better big sister.

When I worry how much room I have on my lap, or in my heart, my daughter reminds me that we all have so much love to give.

Idk why reading this made me so emotional, but I’m glad that J is being a shining light for you as you go through this pregnancy. Having someone to help you not drown in all the negative and scary thoughts that run through your mind is such a godsend. My siblings and aunts were the shining lights for me during both of my pregnancies. I was so blessed to have them.

LOL at T not wanting a sister so he doesn’t have to share his toys. Little does he know girls love trains and dinos too. My little guy will tell you, there are plenty of days he has to wrestle one of his coveted engines from his sister.

So sweet! She sounds like a really caring, sensitive and helpful girl.

Will you share more about that one day? It must have been terrifying. And help! It’s not reliable? !!!!

This is all so sweet and made me cry a little reading about Jaydas excitement. She really will be the best big sister.

Thank you Jennifer for sharing this beautiful post of breaking the news to your children. Your daughter sounds SO precious and nurturing. Children should take lessons from her. She will be the Best BIG Sister to your growing baby!! Showing empathy and compassion is a true gift.

Will you continue to share the children’s reaction when the baby arrives?

Wishing you and your beautiful family many blessings in 2018! YOU are a Super MOM! 🙂

Thanks for sharing. Now everybody understand after to see your post. If you are interested in baby toys then you may visit our blog Onkar Toys

Girl!!!!! So happy for you and I love that you get to share that excitement with J!!! It is so much fun when they know what is going to happen and I can’twait to hear how this journey compares to the first two. Are you doing gender reveal or finding out at birth??? Eeek congrats!!!

Wow that was just so lovely! What a sweet and special time. Also what a miraculous baby!!! You had an IUD and that baby still wanted to be made???? Then the flu and x rays??? I’m so glad everything is healthy and happy with your little surprise

Aw, I love this post. And kinda got a little choked up. My older daughter was 6 1/2 and my son was 4 when I got pregnant with their younger sister, and your kids’ reactions remind me so much of mine. Especially your daughter…my oldest also kept track of how big the baby was and what she was growing each week in utero, and we went through baby name books together, laughing over silly ones and weighing the pros and cons of each. If your daughter is anything like mine, she will be a great helper when her younger sibling arrives. And the baby will adore his/her older siblings. I also love how your daughter was able to help you feel the joy of the moment. <3 Now I'm getting teary eyed again…mine are now teenagers/young adults, but it all seems so fresh in my mind now.

Best of luck, and wishing you and your family lots of love.

Oops…just saw that it’s a girl! Yay, just like our family. Now I’m even more nostalgic. 😉

I came across your article and could not break away. This is so cute! By date, I understand that your third baby is about 3 years old, but I perceive this story as if it all happened today)
I am now 10 weeks pregnant, and my eldest son will soon be 3. He still does not understand that there is another doll in my tummy, but says he is happy. And I’m happy with him.

Oh gosh congratulations!!! I’m so happy for you! Yes my baby is not 2.5! And they love her!