A Magical Birthday Surprise for My Train-Loving Son

Some kids like trains, some kids love trains, and then there’s my son. Absolutely enthralled by trains. 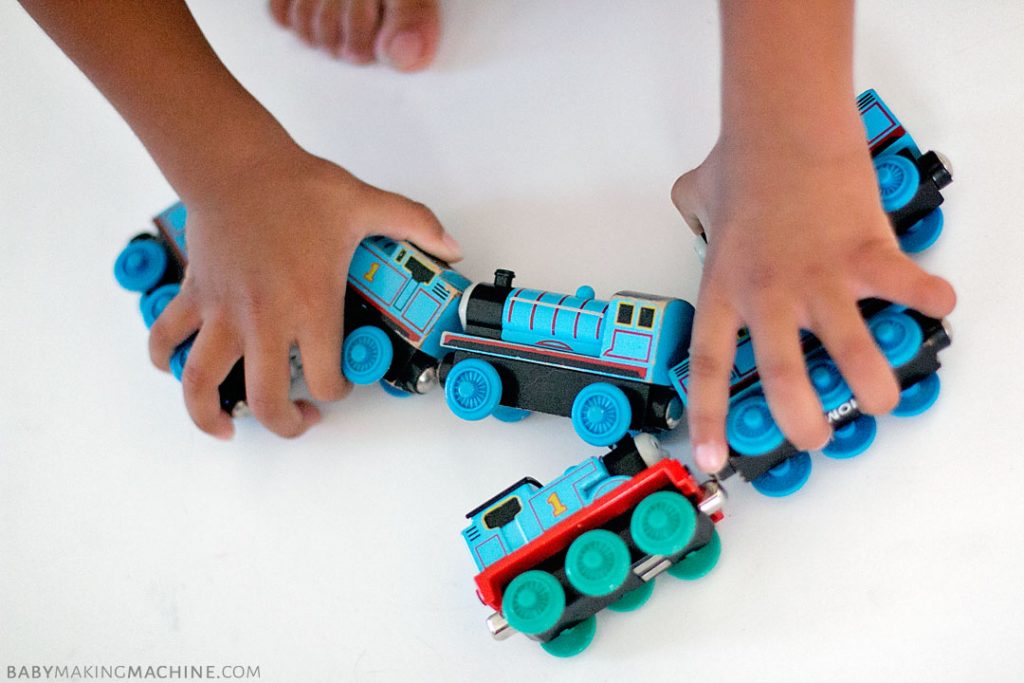 I’m always doing surprises for his big sister and I thought it was about time I started to do some special ones for him.

Several months ago there was a streak of a couple of days where I left the house and came home with plastic bags full of more train tracks. Used, and from friends. Because of this, the next few times I came home with grocery bags, he came up to me and inspected them for tracks. I guess he just assumed that’s where I went when I left him home with daddy.

Mornings before school he’s frequently asking me to help him build his wooden tracks and sometimes when I do, I really get into it. 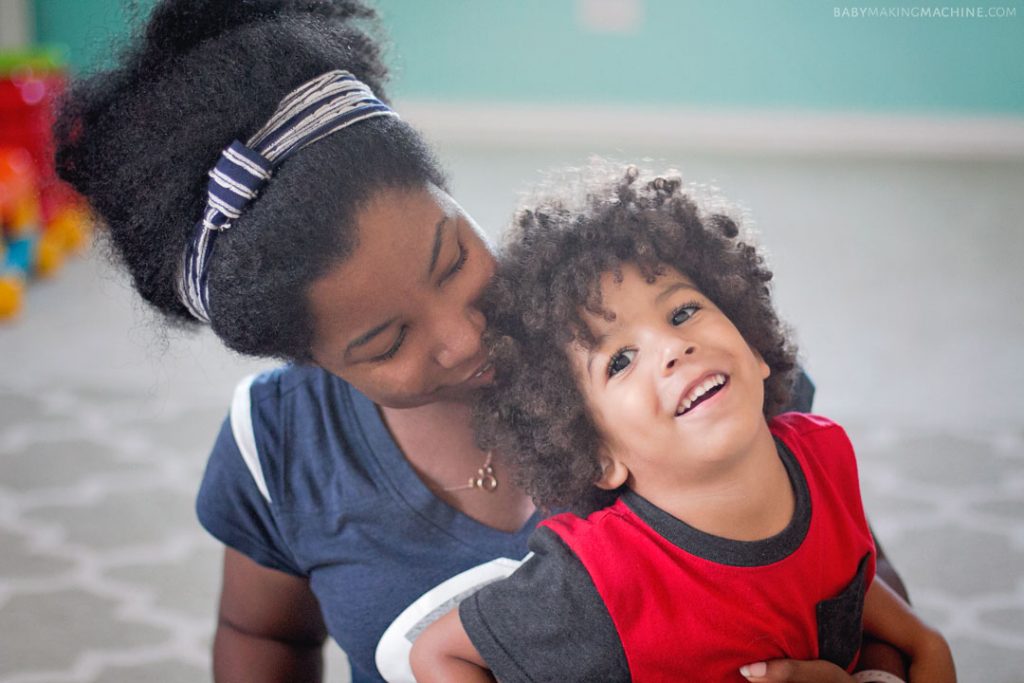 Other times we’re in a hurry and I’m rushing him to pack up his trains, get dressed, and get out the door.

Well this day was more like the latter. I was finishing his lunch, fighting with him to get his clothes on (as usual) and running out the door. I told him we could build trains tracks when we got home. It’s true, we were in a hurry and needed to go. But I didn’t plan to build them when we got home. No, I actually had a much better surprise in store. Watch and see…

Pretty cool right? I can’t take credit for the entire video. The wink was 100% Lil’ J’s idea who said “I thought the train was going to blink. You should make it blink!”

This little project was a two-way surprise for my son. For one, he was SO happy to come home and see the tracks he had been begging me to build all morning. And two, he LOVES watching this video of his trains coming to life. I think he may think they really are alive when we leave now. Though I have more fun surprises in store for his birthday, I think this one was a great start.

How did I do it? I think I’ve discovered the easiest way to make a stop-motion video.

I never thought I’d have the patience to make one, but I’m trying out Canon’s new EOS 80D DSLR — an upgrade from my beloved EOS 70D and it has several awesome improvements, including a time lapse setting on it so you can set your camera on a tripod, tell it how many pictures you want it to take and in what interval.

For this video I set the camera to take about 20 pictures in a row, each 7 seconds apart. Between each photo I’d move the trains and tracks a little. I got a good workout running in and out of the frame, and it sorta felt like I was running suicides, and after a while I had to up the time between photos to be around 14 seconds.

About 400 photos later, I had the story in pictures. I put each one on a movie timeline about 8 frames long and POOF! Magical trains, and a video I hope he’ll cherish forever. 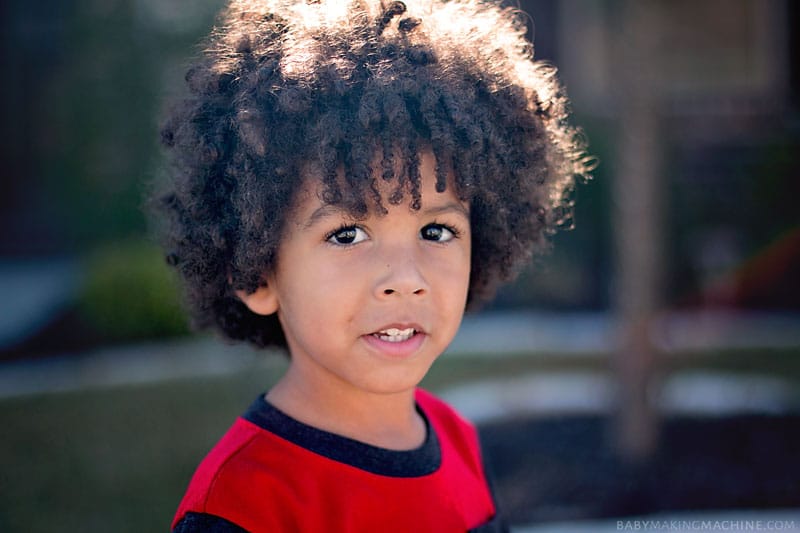 I’m always using my camera to capture memories we were making together, but for this project it was fun to create something he loves, with his favorite toys.

A few other things I’m loving about this new EOS 80D camera and its new lens combo:

All of the features came together perfectly in making this little project for my little train-obsessed birthday boy. I’m actually not sure how I’ll top it next year, but hopefully I’ll come up with something just as magical.

From birthday parties to family vacations, to holidays and more, I’m teaming up with Canon every month to share how we capture our special milestones. I’ll also dish out tips to help you better capture your special moments with your family. Shout out to my favorite camera brand for sponsoring this series.

Love this video and what an amazing camera!

Oh. My. Gosh.
You are the best. This is amazing. I have no words. I guess I have to take 400 pictures when I get home.

Hahaha, let me know how it goes!!

Those are great features on that Canon! My son just started taking a stop-motion class for kids. He would love to try this out!

You’re making me have camera envy! No seriously thought, I’m glad you did this because I’m really trying to make an effort to use my 40d and use it to practice my skills until someone (husband) feels like I can upgrade to one with video capacity. The more tips and videos, the more it drives me to learn! Thanks!!!

I’m SO happy to hear that Sonia!! I love sharing what I learn. I’m the same way, when I see someone do something I find cool it motivates me to get out and practice more!

Oh I love the idea of the interval timer!!! I’ve wanted to try stop motion videos for a while but I had a longer way I was thinking about doing it!

Yea, I’d thought of doing it before like using my remote or just pushing the shutter but this made it easier 🙂 You’d be good at this I’m sure! Also it would be fun to do a timelapse of say a sunset or clouds moving.

Your pics are amazing! I need an upgrade on my camera but have not ventured into the research just yet so this post was very timely for me! I understand the train obsession – my Granddaughter was a train freak. I was at the train museum every month until she turned 5 :).

Let me know if you need any help looking at cameras Monica! I have 4 and love them each for different reasons.

I have tried a few stop motion videos but non came out as nice as yours. Great work and I need to try with my DSLR camera

This was my first stab at it, I thought it was a lot of fun! I’d love to see yours, I bet they’re great!

They had a real train mocked up as Thomas at The Henry Ford we went to take our kids to go see when they were younger. It was a madhouse but the kids enjoyed the experience. Your videos brought back that memory.

I want to go to one of those rides! I know my son would love it!

What an excellent birthday gift. I hope that he loves the video. I want that camera now! I’ve been looking at ones that have Wifi. It will make my life better I’m sure!

Wifi makes all the different with my camera! It’s so fun getting in the picture and video more!

I love this! As always your series are very inspirational. Makes me want to try this. I don’t know how you find the time!

You are too sweet mama. I planned it out, one full day while he was at school. haha. I couldn’t have throw this together without a little planning. You TOTALLY should try this! I really think I’ll keep doing these! It’s fun! But probably make the next one a little less complicated. haha

What a fun video and a handsome little man! That camera sounds awesome – I just switched to canon from nikon and love it

Thank you! And yay for joining #TeamCanon! You’ll love it over here! 🙂

This is so cute! My fellow train lover saw this video and loved it.

Oh yay!! I’m so glad your train-lover loved it!! Mine keeps watching it over and over haha.

I’ve tried a few stop motion videos, but none came out as nice as yours. Great work! I need to try with my new camera! Love your pictures too!

Aww, thanks!! That’s awesome you’ve made some before! I’d love to see them!