The best way to kill a spider

There are few things in this world that frighten me as much as spiders. Of course now that I’m a parent I fear harm coming to my children or husband, but on a day-to-day basis, spiders are my nemesis.

So when I was loading my kids in my car to head to the gym, and noticed the mother of all spiders crawling across my door, I freaked. The good thing is, after this experience, I learned the best way to kill a spider without getting near it, dirty, or killed by the spider itself. 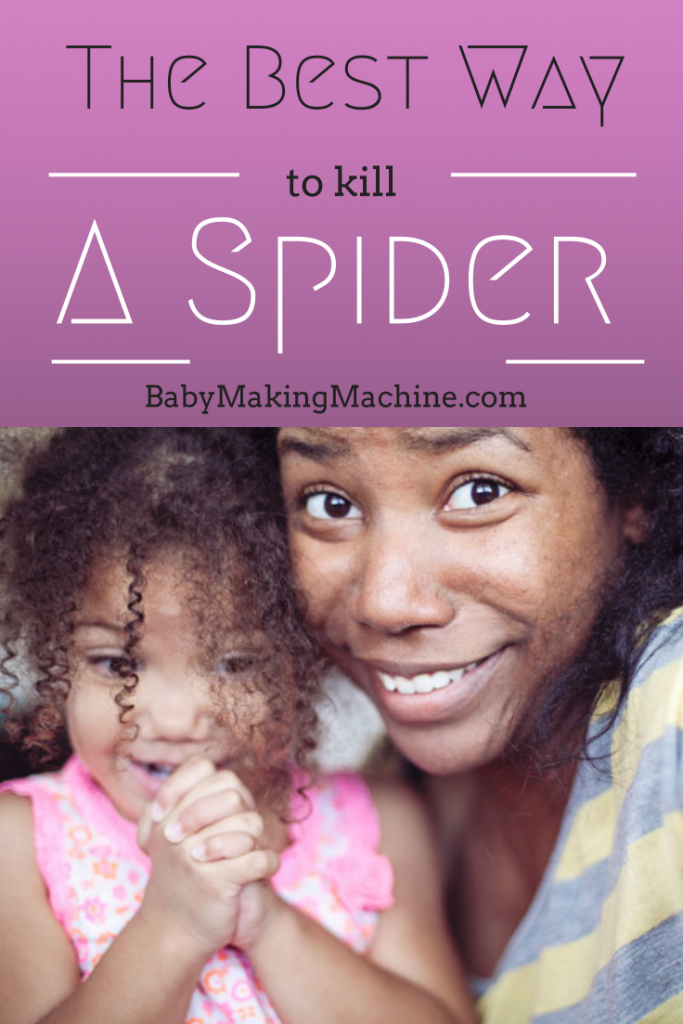 It’s hard trying to be a good example for my kids. I don’t want them to fear bugs or spiders like I do. A recent freak out over a cute little caterpillar on my daughter’s arm reminded me of this fact. But despite my best efforts to conceal my terror, my daughter panicked along side me.

“It’s ok!” I tried to keep calm. “Let’s just get in on the other side of the car. We both climbed in through the passenger seat and I bucked her in from the front. I backed out of the garage as quickly as I could as to not let the spider jump off and crawl into my house.

As I pulled out of my driveway, my daughter squealed from the back seat, “he’s still there!” The spider sat on her window, on the outside, but it still wasn’t fun to look at. I didn’t blame her for her disgust.

Not for long. I thought.

“Don’t worry baby, I’m going to get him off,” I comforted her.

As we drove down the road I turned a little sharper than usual, accelerated a little faster after stop signs, and tried to stop as safely abrupt as possible.

Nothing got that spider to budge more than an inch.

My daughter leaned away from her window as far as she could while in her car seat, getting as far away as she could from the beast. At a red light I decided to give something else a try. I banged her water bottle against the window. The spider jumped and I cheered.

“No! It’s back!” My daughter informed me. And there he was, back on her window, as chipper as ever.

“What are we going to do?” Lil’ J asked me. Wanting to know if I had a brilliant plan I’d like to share.

“And then it’ll get run over by a car! And that will be fun.” She chimed in. “But not for the spider!”

I had to laugh at her thought process. Happy by the death of a spider? Yep, she’s my child.

No matter how much I swayed the car—probably looking like a drunk driver at noon—Or knocked on the windows when we were at a red light, it wouldn’t budge. I kept peeking in my side-view mirror, where I could see the stubborn guy staring back at me. 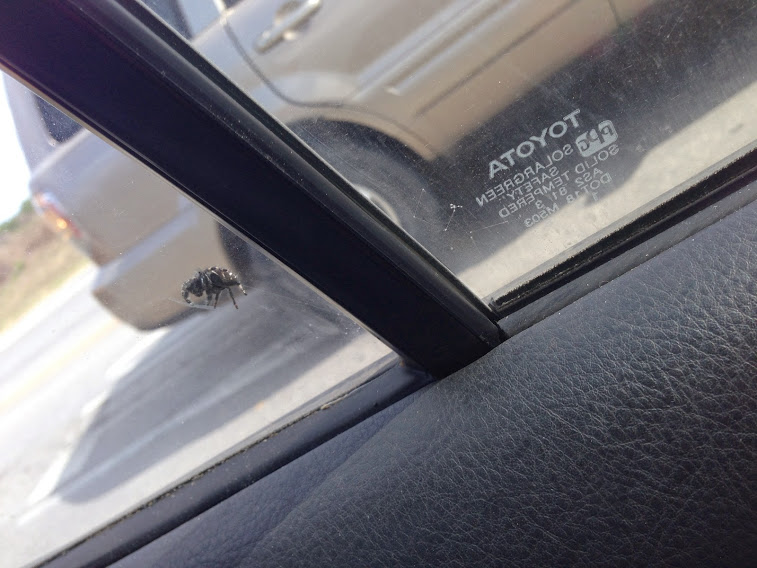 I handed Lil’ J my phone to take a photo of the assailant, and she did a pretty good job. I promise you, it looked bigger in person. And it was hairy! *SHUDDER*

We pulled unto the gym and he was still sitting on her window. I wasn’t sure how I’d manage to get out of the car, then get both kids out without it jumping on my face and eating me to death. Climbing out the passenger doors seemed embarrassing in front of the crowed that was around, but you’ve gotta do what you’ve gotta do.

Just as I was about to choose humiliation over death-by-spider, I saw my saving grace across the street.

They were washing their trucks, and with no shame, I turned the car around and pulled into the station, right up to one of the men. 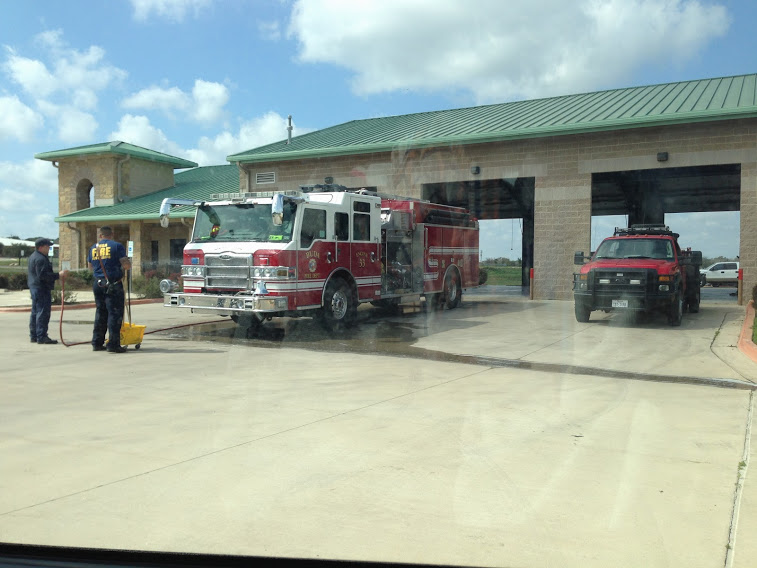 “Excuse me,” I said as I rolled down my window. “There’s a big spider on my window back there, could you guys spray it off for me?”

For a moment I felt like a silly damsel in distress. This princess normally likes to fight her own battles, but this was one dragon I was too afraid to slay.

The man I spoke to spotted the hairy thing right away and signaled for his buddy with the hose to spray it down. The other firefighter looked a little confused, so the first guy just swatted it off with his hand and squished it under his foot.

“Thank you!” I professed.

They gave us a wave goodbye and my daughter and I cheered as we drove away.

“What happened to the spider?” Lil’ J asked. “Oh, he got squished.” I guess I could have sugarcoated his ending a little better, but when it comes to spiders, the only good one is a dead one.

Hairy ones are the worst! I grew up with lots of gross spiders in Ohio (my dad’s super scared of them so I guess he was a bad example of how to be typical “macho man brave” about them!), and I don’t know what’s worse dealing with spiders or roaches here in NYC. Bugs period just gross me out, but I’ve been careful not to use “ewww yucky” type language with Nia. She’s a bit more into nature than I ever was and I don’t want to spoil that!

Aren’t they the worst!!!? Aaaahhh!! Ok so I’m ok with almost every other kind of big. I mean I don’t like them, but I have no problem killing them. I’m terrified that every spider, no matter how small, has the ability to outsmart and kill me.

As a kid I loved playing with bugs. Just not spiders. Yuck!! Oh, and Lil’ J wouldn’t let me set a ladybug on her, she’s definitely more squirmy than I was, little prods. Haha.

I am all about the vacuum. My current nemesis is stink bugs. I live in the northeast so we don’t get too many exotic varieties of bugs up here, but first it was spiders and silverfish, then I lived a couple places with house centipedes and they creep me out like little else (so many legs and sort of furry…ewwww), but now we have stink bugs crawling out of the woodwork (literally) and they’re driving me nuts. They’re not dangerous, but they’re creepy and crunchy. Usually they just pop up out of nowhere (once I had one on my hand, and another was sitting on a dirty washcloth in the kitchen the other day) and I scream when I see them. My kids know I do not like them! I can kill them when I have to, but if I’m worried about getting a good angle and missing on the first pass (or if they’re on the curtains), I usually just grab the vacuum and get them. And then I get some bonus vacuum time after that, because if I pulled it all the way out, I might as well clean what I can for a few minutes!

Noooo! You don’t imagine them surviving in the vacuum and laying a billion eggs and then they all crawl out of the vacuum into your house while you sleep?

That’s exactly what I imagine. *shudders*

Haha, I used to, though the immediate fear of the creature always won out…and all these years later it’s never happened, so I tell myself that the force of the vacuum dismantles the bug. Though you can bet I will still dispose of that vacuum bag as quickly as humanly possible when the time comes!

My vaccine wand doesn’t suck very well so with my luck it would turn and lunge for my face before I could suck it in. Then I’m with Emily… Chances are it’ll lay eggs in the vacuum, then a swarm of them will come for revenge on me while I’m sleeping.

Oh I met stink bugs while visiting TN! I had the lights off in my room and one flew right on my computer screen and freaked me out. Eeeeeh. I hear they stink when you squish them too.

Ugh. I’m not a nature person.

This had me smiling and cracking up! I can completely relate because this would definitely be me. I can’t stand insects and would have been “drunk driving” at noon too! I unfortunately made my son afraid of bugs but his dad is helping to turn that around. Thank Goodness you found firefighters!!

Firefighters saved the day! Haha. My husband isn’t afraid of anything (except snakes, which don’t frighten me) so hopefully he can get our kids all backboned-up and turn them into my little exterminators. 😀

I am laughing hysterically and also empathizing with you. I can totally relate as I have actually pulled over on a highway and flagged someone down to get a spider out of my car. This post was too funny!! Thanks for the Monday laugh.

Oh my goodness I seriously don’t know what I would have done had it been inside my car. I love your thinking though. Abandon my kids and flag someone down. Totally what I’d do. I keep the windows up at night for this very reason. Once I left one open on accident and was so scared a spider got in.

Nope, I can’t stand spiders either. I’d rather be confronted with a big old snake. My biggest fear though is Jerusalem Crickets. Ugh!! They have little faces, gah!

Just remember I’m laughing with you and not at you…LOL! Im not afraid of spiders, snakes or bugs as long as I know what it is. When I lived in Oklahoma, there would be dozen of wolf spiders in my yard and when Id cut the grass, they’d come crawling out. They never bit me or anything. One day, even a tarantula came crawling out. I felt bad for the lil guy cause I clipped one of its legs with the blade from mower. Yesterday, while cleaning off my deck, I emptied out a cup, without looking inside first, into a garbage bag and out came a snake. I managed to say the F word but then stood there like – what do I do now? I think it was more afraid of I than it and it slithered further down the bag. As it did, I tied that sucker (bag) up and threw it. LOL! I grew up with brothers who made it their mission to scare me, so that’s how I’ve overcome my fear of creepy crawlers…lol

Very cute story I enjoyed reading it. I’m very glad the spider didn’t poison you or your daughter.

Oh my goodness, I think I could have written this! 🙂 lol

Before kids, I once called my husband at work and made him come home to kill a ginormous centipede in our bath tub, it literally made me paralyzed in fear!

My wife and daughter freeze when they see spiders and then scream spider spider. I have to then go in to the room where it is and i after come out with a spider otherwise they will not go back in there.Sometimes i think can you be that frightened of a spider.

Your tax dollars at work!