What I Learned Taking a Tween to Disney World

If there’s one secret I’m taking with me to my grave, it’s the fact that I took my 10-year-old sister (her idol) with me to Walt Disney World. I mean I can tell you. That’s fine. But I can never tell my daughter. I’m not sure she’d forgive me. 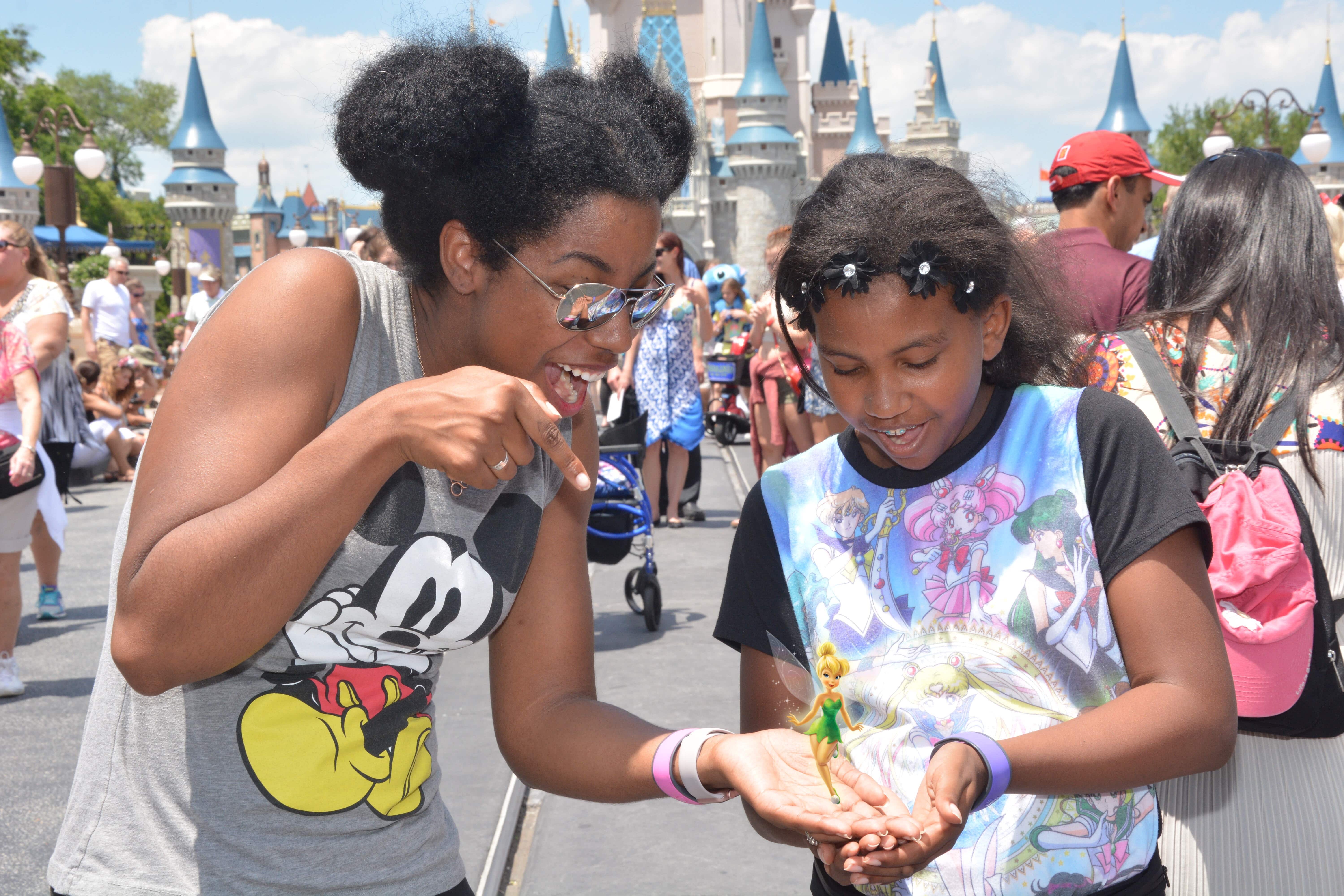 Lil’ J couldn’t join me because I’m already toeing the bad parent line with taking her out of school for trips. she knew I was going to Disney World for work. But she didn’t know the extent of this trip. I told her I’d be doing stuff she’d think was scary or boring which was totally true and my plan from the start.

A year ago, when I didn’t get invited to the Disney Social Media Moms conference I was totally bummed. It’s a conference at Disney World where you get to learn some new things in store for the Disney brand, network and get to play at the parks. It’s definitely not free, but it’s a good deal.

This year, I was somewhat hopeful, but not too expecting since we’d just taken a family trip less than a month prior to invites going out.

I told myself if I was invited, I’d bring my sister and my mom, because my sister hadn’t been since she was about 4 or 5. She’s stood by watching us go on our trips, and been hopeful for a visit herself. 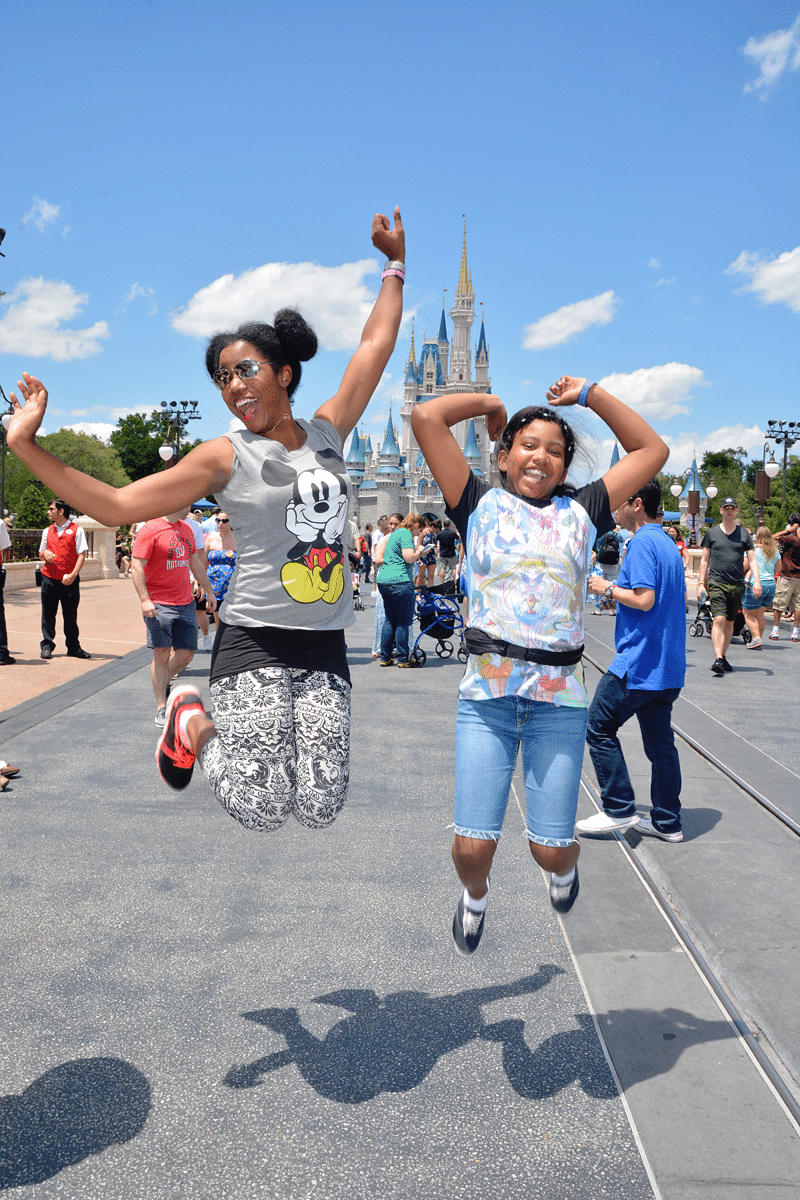 So when the email came, I kept my promise and invited her to come with me. My mom stayed home to help with my kids when my husband had to work. She was sad to miss Star Wars Day, but happy to see me spend time with my youngest sister.

Before the trip I was texting my neighbor and Disney-obsessed travel agent friend around the clock asking for recommendations for food and fastpasses. I wasn’t used to this last-minute planning. Normally I have 8+ months to think about all of these things and strategize. Brinkley is awesome and patient and can totally hook you up if you have questions. 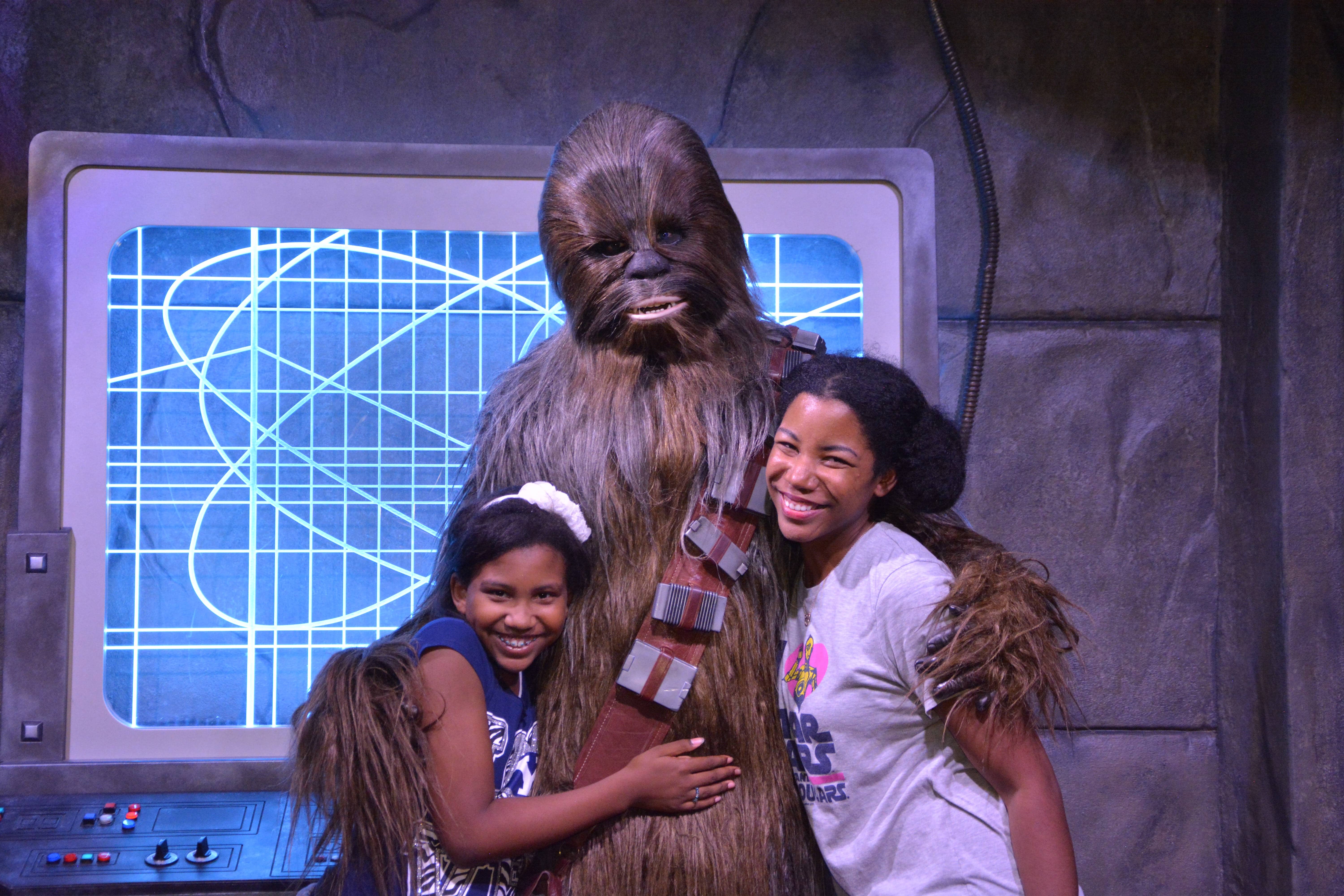 I didn’t know what to expect taking a tween to Walt Disney World, but I looked forward to not having strollers, extra pull-ups, sippy cups and changes of clothes to haul around. I also was looking forward to actually riding a Disney roller coaster. Up until then I’d only been on Goofy’s Barnstormer and Thunder Mountain (a big mistake doing that with my terrified 5-year-old).

She promised me she could hang–Do all of the parks from open ‘til close. She told me I was the old lady who would probably need a nap. …We’d see about that. 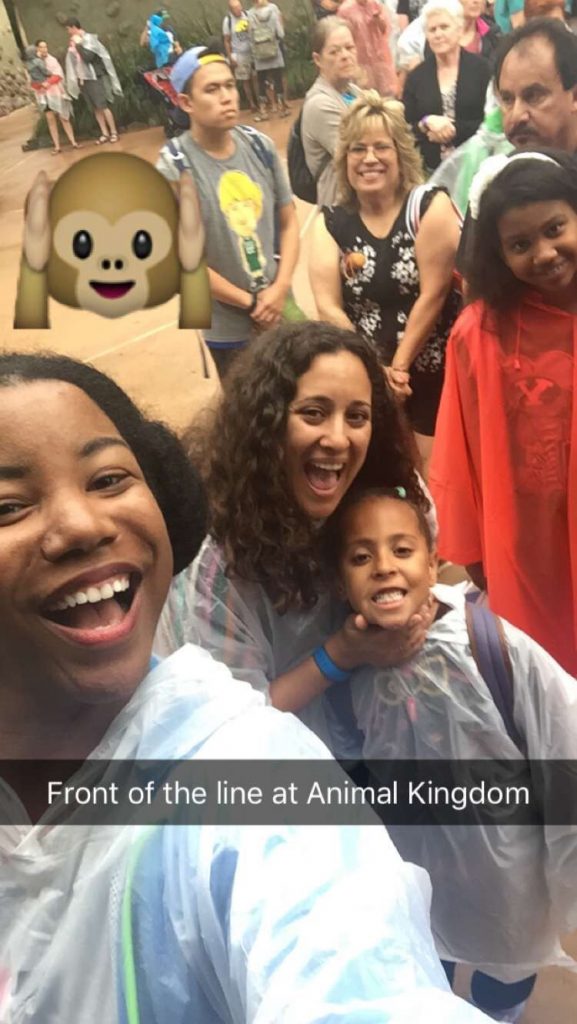 We arrived a day before the conference registration and did just that–A challenge to go from open til close. We arrived 30 minutes before the gates opens at Animal Kingdom, standing in line with some one of my best bloggy friends and got to watch huge beautiful parrots fly in and out to help open the park.
Then we went straight to Dinosaur–A ride I missed when I took my kids because… Well, it’s terrifying. It really is! If your kids like dinosaurs they probably won’t after that ride.

Before we went to get on I looked up and saw my sister running the other direction. She was too scared to get on. I rolled my eyes and held back my frustration as best as I could when I told her to wait for us at the exit.

Was this how it was going to be the whole week?

She told me she wasn’t afraid of rides and already was proving me wrong.

A roller coaster was next–Expedition Everest–and she hopped on without a fight. And thankfully that was pretty much the case over and over the rest of the trip.

I realized it was the more dark and creepy rides that scared her, not the thrill rides. So of course I gave her a hard time on Haunted Mansion–Which was my first experience on the ride too because it was another one I deferred for the kids’ sake.

From Animal Kingdom we went to Hollywood Studios for a majority of the day then closed down the night at Magic Kingdom, where the Park closed at 1am. Yes ladies and gentleman, we opened up the joint, and closed that ish down. Something I probably will never aspire to do again. 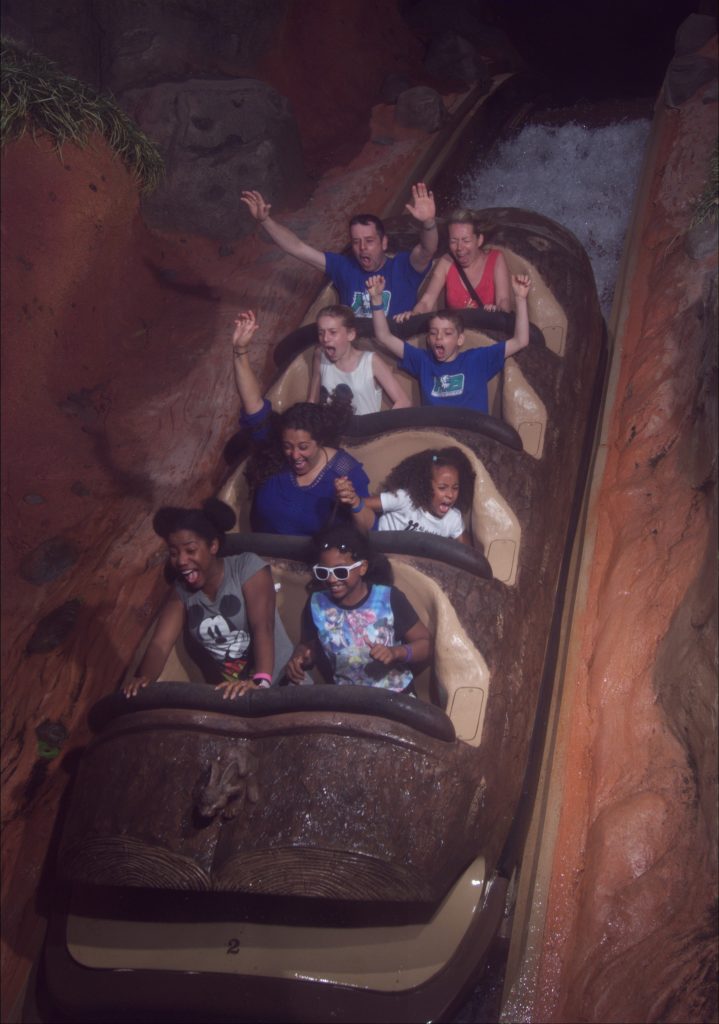 After the 3 days at the parks (which we closed down a couple more times) I had a grand total of 22 new experiences which in my opinion are some of the best rides at Disney World for tweens: 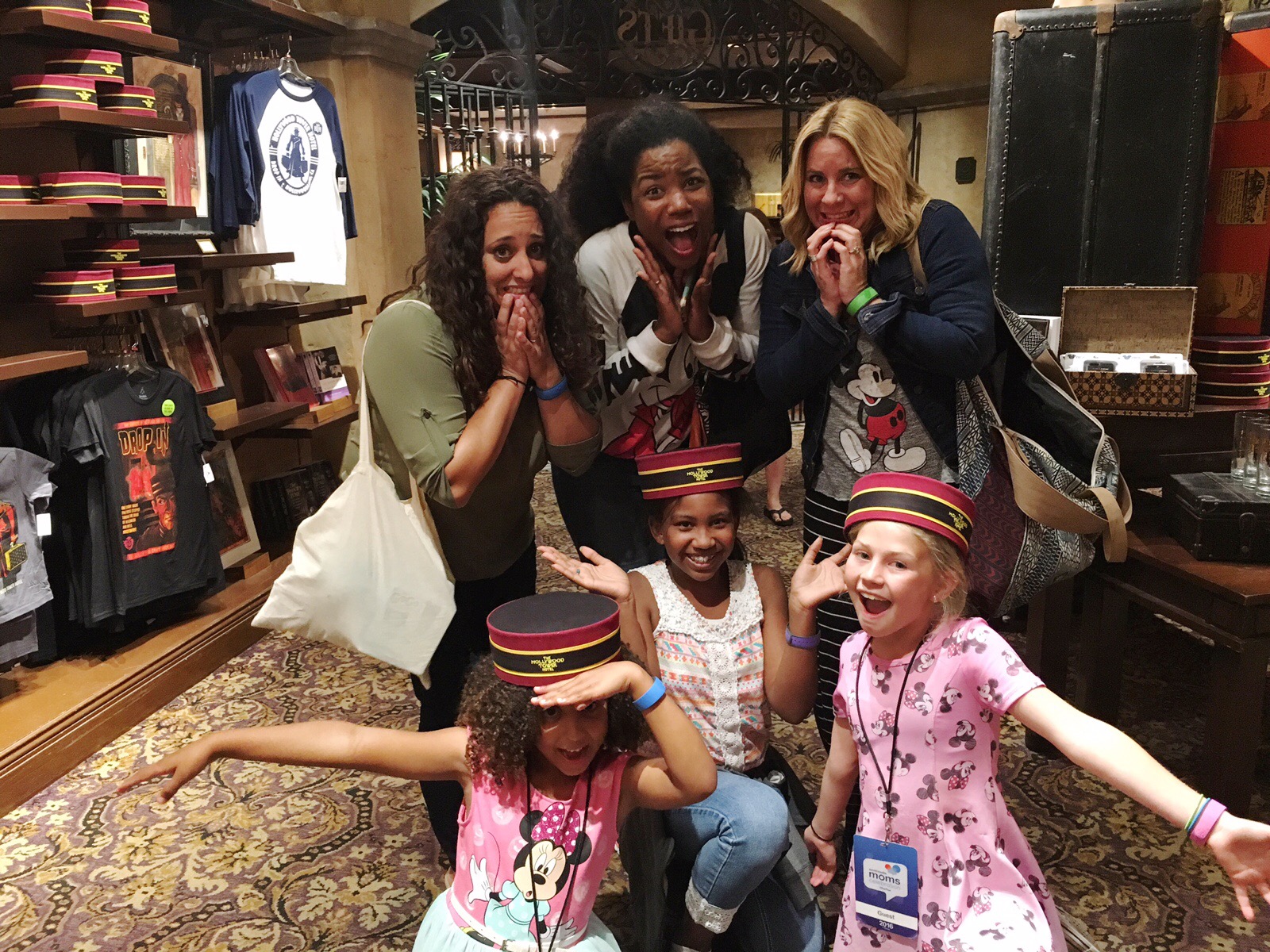 My sister also got to do the Jedi Training which was on her bucket list, and she made friends with other blogger’s kids and went on the rides over and over when I was pooped. 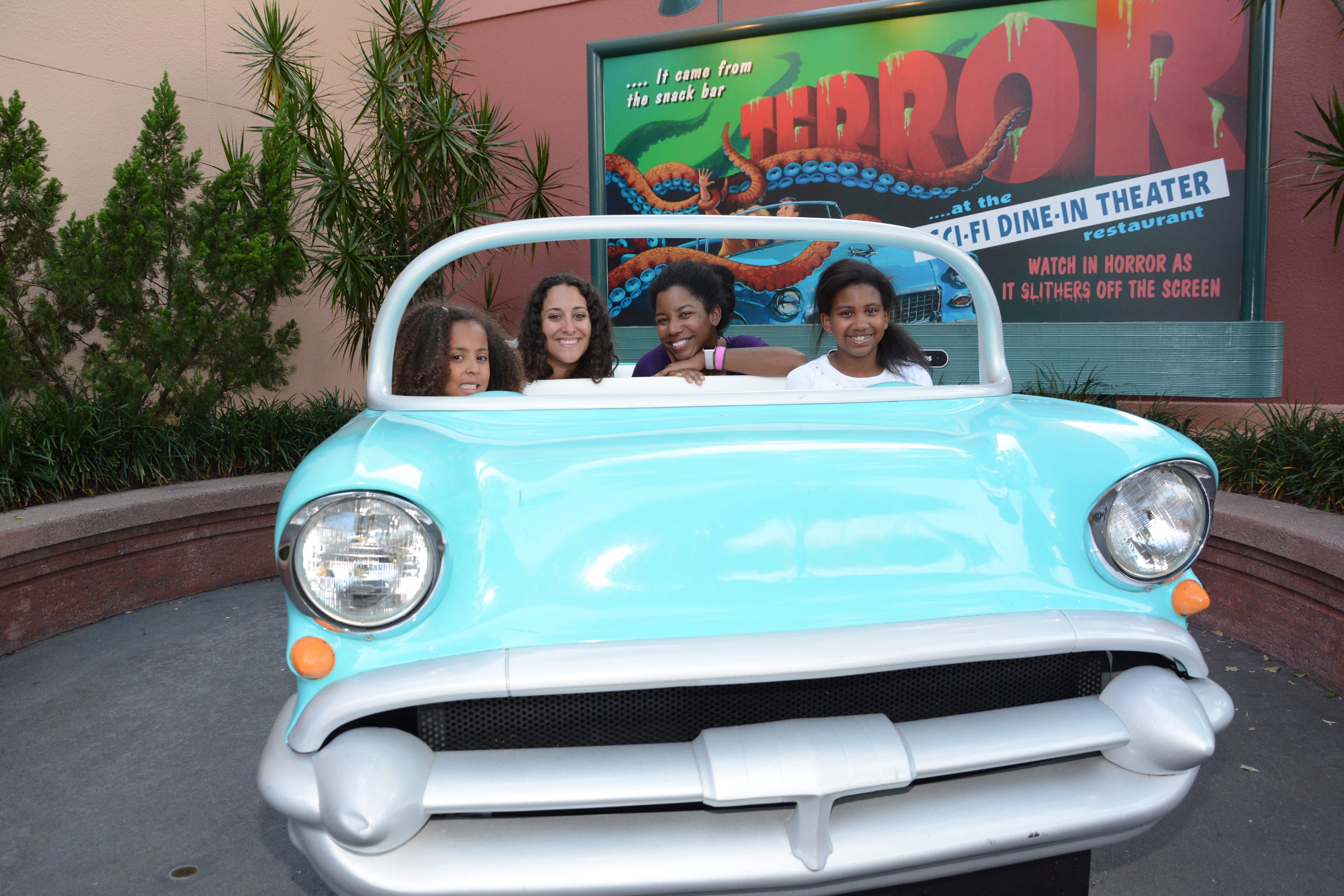 The Finding Nemo Musical was on my bucket list this trip because I’ve heard a lot of people say they like it more than the Lion King Show in Animal Kingdom, and I had to see that for myself. Now I can officially disagree with anyone who says that, but it was still good. 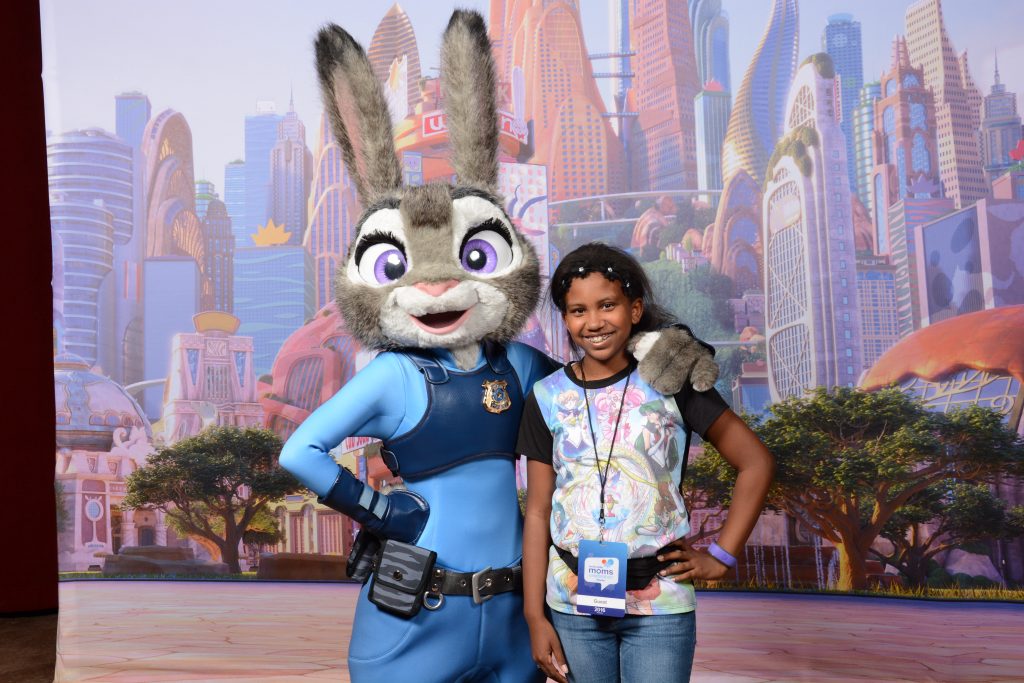 So will your tweens and teens have stuff to do at Disney World? Heck yes! I mean goodness, I see why adults go alone now. And I don’t know about your 10-year-olds, but my sister was still totally smitten by all of the princesses and characters. I didn’t expect that, but the magic hasn’t dimmed a bit for her.

All this to say that the one awesome thing I learned on this trip that I didn’t expect was that Disney without your little ones can actually be fun. Not to say that I’m planning any more trips without them (they are truly my partners in crime and it sucked leaving them behind), but on our next trip, I will definitely be convincing the hubs to do a night or two with me while the kids go to a Disney kids club night and we get our thrills on without strollers in tow.

Other things I learned about doing Disney World with Tweens:

I have much more to tell you, including an Alice Through the Looking Glass movie review (is it freakishly cute, or just plane freaky?) and some new stuff to get you pumped about your upcoming visits that I’ll be posting in the coming weeks.

Have you ever been to Disney World as a tween or with your tween? What did you learn? 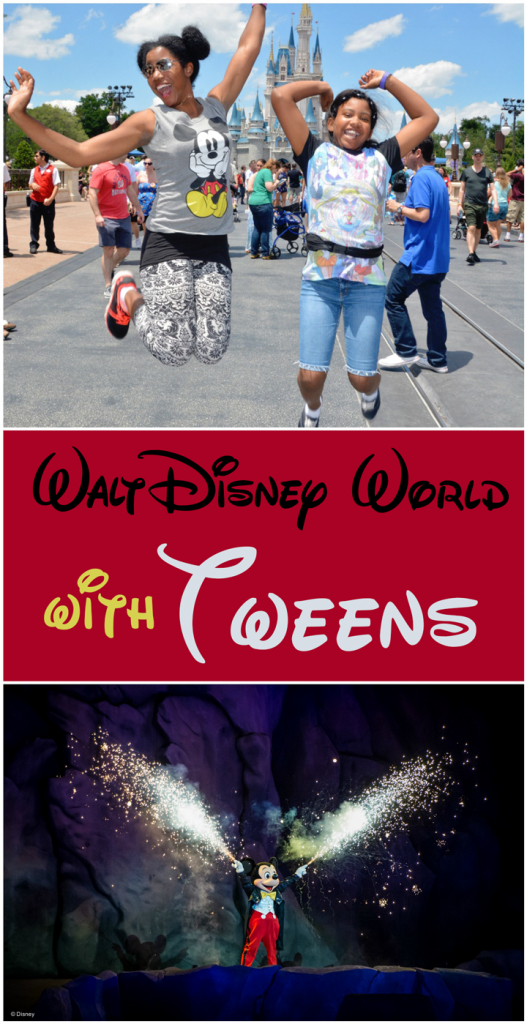 My girls just went and they are 10 and 12. They had such a great time experiencing new rides and adventures.

Aww, I’m glad they had fun too!

A time I will never forget is when I was FINALLY able to stay off a ride, by myself. My family had been going since I was 5 and LOVED roller coasters. I hated them because they were super scary but was always too small to stay off by myself so I was forced on many times. Other times my poor mother had to stay off with me because I would blatantly refuse to get on. At age 12 I was finally at the age where I had a cell phone and my own money in my little carrier and was able to skip the evil roller coasters and walk around a little bit until the ride was over. It was the best ever. I was able to enjoy myself and so was the rest of my family.

Awww, my daughter doesn’t like coasters but I hope she grows out of it. They’re so fun, especially at Disney. But I don’t force her on. haha

I truly believe that Disney is GREAT for ALL ages!! Seriously there are so many attractions, and they are always putting in new stuff. I loved it as an adult both times, and I know I would still love it!!

I really do love it! I feel like a big kid 🙂

I have loved taking my son to Disney over the years. He has grown up on Disney and with each new trip we the experience leaves memories that last forever.

It looks like you had an amazing time! I have taken both teens and tweens to Disney and I agree that it’s so much easier than taking the little ones!

It looks like you have a fantastic time and your sister was able to keep up with you. I have heard that everyone can have fun at Disney, no matter what your age. I have not been for a really long time. I might just need to take a trip.

I just went with my teen and youngest. We closed it down both days, but oy my aching feet. 😉 Glad you had a good time!

There was a time I could have gone from open to close, but I don’t know… You guys went on everything fabulous there. What an awesome day!

No doubt Disney World no doubt is a great to take tweens and teens. It’s a way to make a bond, and have memories which will last.