Now we are able to stream our favorite Disney live action and animated movies on Disney+! I you’re looking for a fun way to keep track of which one’s you’ve seen, and compare it to the animated counterparts, you’ll want to download this free Disney live action movies checklist.

Disney+ launches in November and subscribers should have access to all of these, including more that are in production exclusively for the streaming service. I’ll come back and update this list as more Disney live action movies (like Mulan!) come out.

Also, we have a fabulous live action Disney printable checklist that you can use to keep track of what you’ve seen so far, mark your favorites, and compare and contrast the animated Disney movies to the live action remakes.

If you want to jump straight to that you can head here for the free downloads.

And without further ado, here’s the best live action Disney movies ranked from best to worst.

From being one of my favorite animated Disney movies, to being my favorite remake. To me, this was Disney finally getting it right. They made just enough changes and updates for me to feel like I was watching a new movie, while also paying homage to the original. If you haven’t seen this one yet change that! You can read our full Aladdin review here.

I have to admit this movie and it’s placing surprises me. But it’s one of my son’s favorites that we keep going back to and every time I see it I’m impressed over and over again. You can read our full Jungle Book review here.

I think this movie almost doesn’t count as a remake because it’s so different from the 1959 Sleeping Beauty. But this tale retold is considered a remake on every list I’ve seen and most definitely one to watch. We took a break from watching it for years because Lil’ J remembered it as being scary, but after re-watching it for a movie night recently she changed her tune.

Admittedly this remake is one I haven’t watched in awhile. But the remake was done SO well. This is one of those movies that stayed true to the original but had fun with the updates. I’m planning to throw a 101 Dalmatians movie weekend with the kids to watch the animated movie as well as the live action remake and let them decide which one they enjoyed more.

5. Beauty and the Beast

I’m a little surprised at this one falling halfway down my list. When we first saw it I loved it, but didn’t like how close it stayed to the original. I like when the creators change it up and give us something new and exciting beyond the animation. My kids–Especially my daughter loves it, but it’s not one of my favorites. You can read our full live action Beauty and the Beast review here.

This movie was so beautifully done. We re-watched it this past weekend because I hadn’t seen it since theaters. I still thought it was a little boring. But it managed to keep my kids’ attention and I was once again blown away by the visuals. You can read our first impressions of the live action version of Cinderella here.

I had such high hopes for this movie. The visuals were beautiful but the remake had me wondering why? Why re-do a movie and only change the animation. Sure there were a few new things but not enough to me to warrant a remake. Plus, unlike in The Jungle Book, the animals looked real, but a little too real, and lacked emotion to pull us into the story the way the animated version does. Still, my kids prefer this version. And it almost makes me want to disown them. Check out our live action Lion King review here.

The only person in our family who liked this Disney live action remake was my daughter. I still prefer the original. One thing that did surprise me however, is how good Alice in the Looking Glass is. But I’ll admit I’m a sucker for movies involving time travel.

Last but not… Ok, yea it is least, is Disney’s live action version of Dumbo. Granted the original wasn’t that great, and has a bit of racist undertones. This updated version left all that out. I loved how different it was from the original but I found it to be pretty boring and too long. At least the animated version is under a hour and a little better at keeping kids’ attention. You can read our live action Dumbo review here.

Ok, full disclosure, we actually haven’t watched this one yet! We totally missed it in theaters and since Winnie the Pooh is one my kids desperately need a refresh of, we are going to watch both the animated versions and the live action movie that isn’t quite a remake. We’ll come back and rank it after, but if you’ve seen it, let us know what you thought!

Alright so that’s our take on Disney live action movies ranked. How many have you seen? And how does our list compare to your own? Leave us a comment and let us know!

If you have some catching up to do, download our free checklist so you have check them off as you go, and keep track of your favorites! 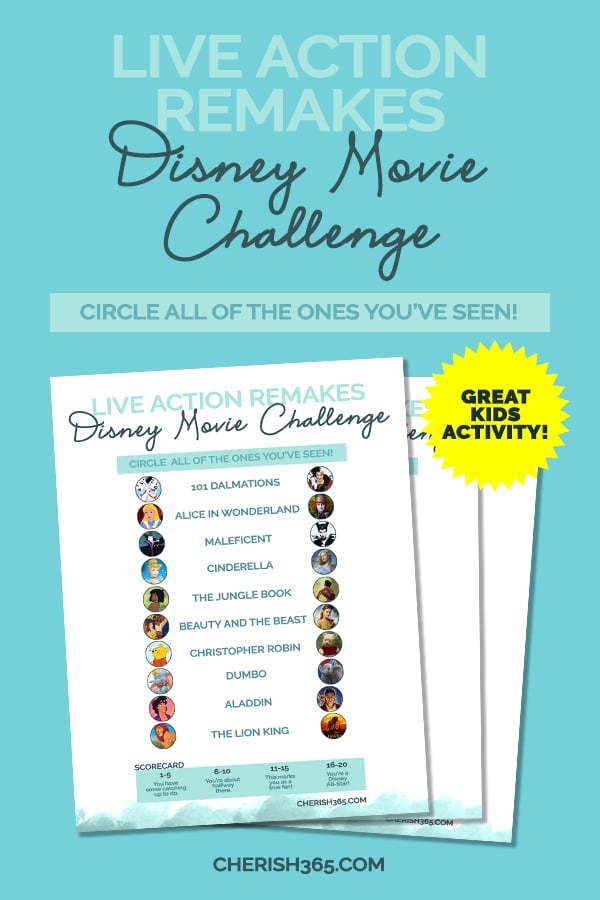