My 6-year-old’s Review of Beauty and the Beast

Right off the bat I’m tempted to go back and update parts of my review. The first time I screened this movie I took two pages of notes. If you missed it, here’s everything you need to know before taking your kids to see Beauty and the Beast.  This time I was able to sit back and enjoy it with my daughter. She wasn’t ever scared and the scenes I called out as more “violent” she didn’t even bat an eye at. I didn’t necessarily think she would find the movie frightening, but thought I should let parents know in case their family needed a warning. 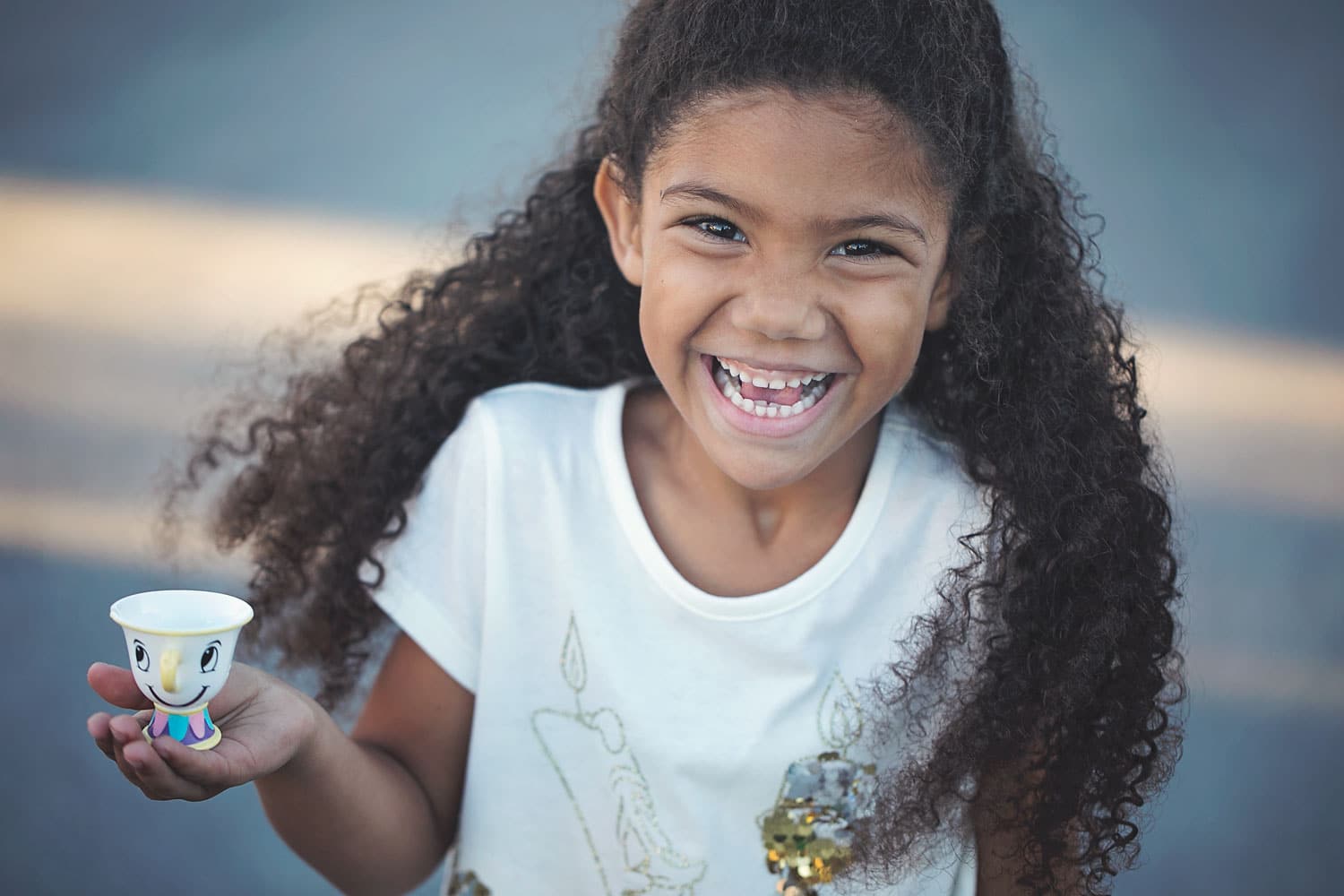 I loved the music even more this time around. Especially the new songs. Lil’ J sang and quoted along during parts of the movie, and called out parts that were missing. She hasn’t seen the animated classic as many times as most of the new Disney animated films, but she’s seen it enough to know it pretty well. I love that she noticed Belle was stronger in this film. A subtle message of female empowerment managed to impress my 6-year-old.

Throughout the movie she kept asking me if was almost over so I thought she was getting bored, but during this interview with her I realized she was asking me that because “I didn’t want it to be over.” She’s asked me to put the soundtrack on repeat and we keep discussing the movie so it was definitely a win in her book. In her own words it’s her new favorite. Here’s her Q&A review.

What did you think?
That was amazing. It’s my new favorite movie. I give it 100 thumbs up instead of 10.

Why did you like it so much?
Because there’s lots of funny parts and I like funny parts and I just really like long movies and stuff. It was longer than the other one for sure. It wasn’t too too too long but it was a little longer.

I was asking if it was almost over because I didn’t want it to be over.

(She also called out the two “controversial moments” I outlined in my review as being funny, but she didn’t want to spoil it so she asked me not to write that out here. But she and I do discuss it in detail in one of our vlogs today).

What was the funniest part to you?
Belle was very smart, her dad was asking for something and she knew exactly what he needed even when he thought he didn’t need it.

It was funny when LeFou told the girls who liked Gaston “it’s never going to happen ladies.”

Which part was your favorite and why?
And the very end when they had a dance in the ballroom because I like happy endings.

Do you want to see it again?
Yes. Because I really liked the movie.

What was your favorite song?
The new song. (There were 3, we just bought the soundtrack and her favorite is How Does a Moment Last Forever. We also love Days in the Sun and I LOVE Evermore).

How would you compare this one to the other version?
The new Beauty and the Beast has more funny parts. Gaston seems a little more rude and his clothes are a little different.

Most of it was the same. 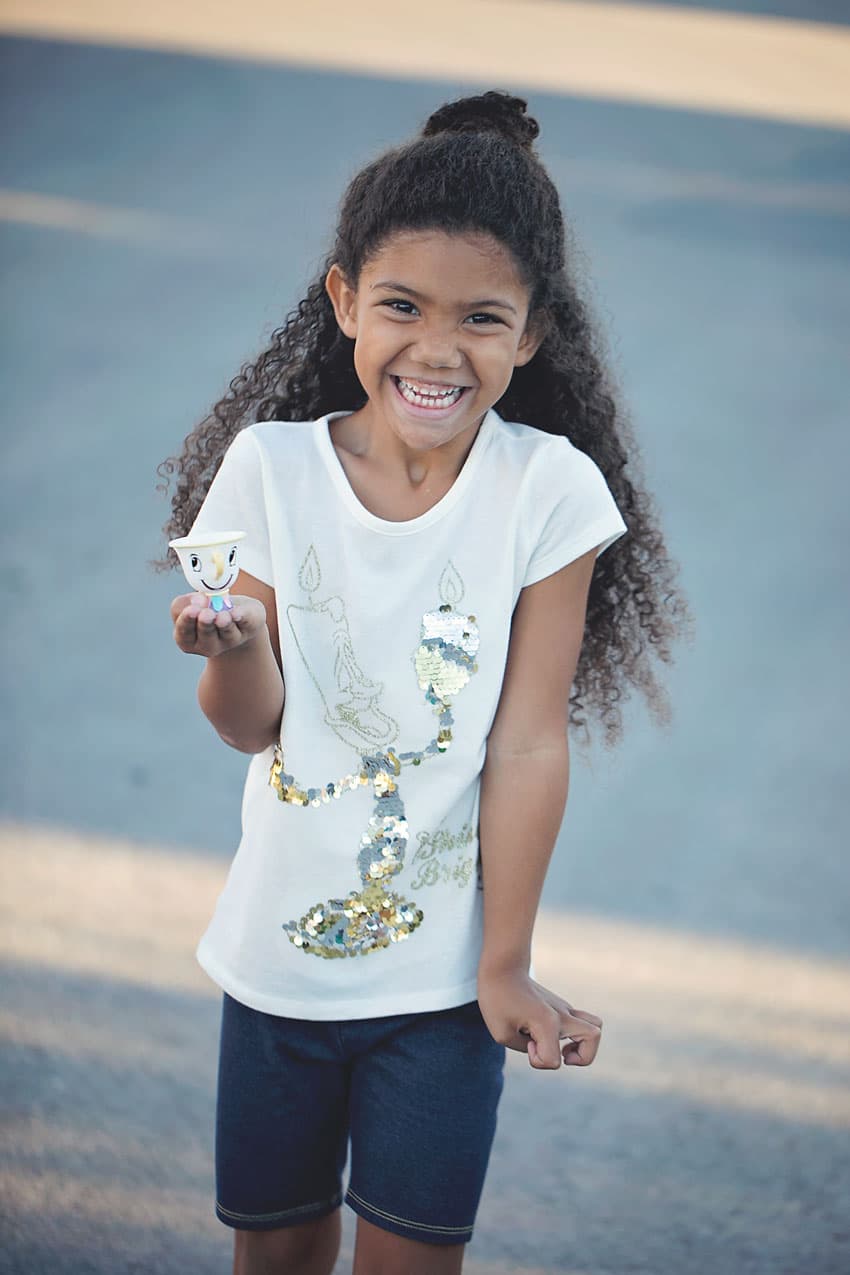 Did you like this one more than the other?
Yes, because it’s longer and more entertaining.

Did anything surprise you?
They went to Paris.

Were there parts missing that you liked in the other?
He didn’t say “don’t talk about her father that way!”
“You look so, so…” “Stupid!”
He didn’t say “But you’ve read it twice!”

Was the beast scary?
Not that much. But it was still kind of loud. I thought he was going to be scarier but he was really kind and gentle (get it?).

What would you say to someone thinking of seeing Beauty and the Beast? Should they see it on a date or with their kids?
You should go see it! The kids would like it because it’s a kids show, and grow-ups might like it.

Who was your favorite character?
Of course, Belle.

Did Belle seem cooler in this movie than the other?
Yes, because she was smart like I said, and she was really braver. She seemed braver because there was more stuff in this one than the other one. Her dress was different, I want that dress.

Seeing it a second time around I definitely loved it a lot more. My critical third eye was gone and I was able to see it for what it is. The diversity throughout the film made my heart swell. I’ve never seen so many brown people (and interracial couples!) in a Disney film.

There were a few lines I missed the first time around. One of my favorite lines repeated word-for-word from the classic is when Belle is nurturing the scarred Beast after the wolf attack. You know, the “Well you shouldn’t have run away…” argument. I also especially enjoyed the Beast’s song “Evermore” which replaced his sad howl from the castle when he allows Belle to leave. So beautifully sung and perfectly fitting for this movie and a Broadway stage.

I mentioned this before but this is one worth catching in 3D as it seems like they put some effort into making quite a few scenes really pop. However there’s one scene with floating gold that made me nauseous both times so beware.

Finally, this time around I got so many chills listening to the songs and just soaking in the beauty of this remake. My first impressions was that this movie was made for those of us who know and love the classic so well. But as evident in my daughter’s enthusiasm, even budding Disney fans will enjoy this remodeled tale.  If you go see it with your family this weekend let me know what you think!

Tags: beauty and the beast, disney

Beauty and the Beast is a beautiful movie. I love the story, music and the way they love each other. I watched it with my friends and after I read this post I think I will go see it with my little daughter, may be this weekend.

Yay! Let me know what you guys think!

Love it! Can’t wait to see it!

Yea!! Let me know what you ladies think of it once you do! J is excited to go see it again with her dad and I’m going with my mom Saturday!

Tomorrow is my daughters 6th birthday. We have been waiting for months for the release of Beauty and the beast. Belle is her favorite! As the date has been getting closer, I’m starting to second guess myself whether or not it’s going to be too scary for her. My brother sent me the link to your first review and through that I stumbled upon this review ? Thank you. We are still planning on going. Here’s to hoping she loves it as much as your little one!

Hi, just wanted to say that I used you and your daughters review of the jungle book as a guide of whether my 6 year old daughter could watch it and you were spot on. I am thrilled you guys reviewed this one and will take her to see it as I am confident in your reviews! Thanks for taking the time!

I’m taking our almost 4.5 year old tomorrow on a mommy and me date. I hope she’ll like it.

This is so cute. Here’s some tips for the parents parents who’ve been wondering whether or not they should take the kids to see this movie: just a few explanations for some ‘ahem’ details and it’ll be fine. Remember, kids learn quick, because they’re smart. You just gotta guide them!

Your kid is so cute~~ I love her voice and love watching how she talks >.< I was worried that the new Gaston, who is more cruel, may make the kid scared. It seems no need to worry about it.
I also like the BATB. Thank you for sharing the review.

This kid is so cute. She is very beautiful and confident. My kids also like to watch movies. Once I show them beauty and the beast and they became fan of this movie. Reviews are awesome. Thank you so much.