Let’s take a break and discuss this: My Bachelorette week 1 and 2 recaps

Why am I writing about this? Because as much as I love and cherish my family, I love and cherish Monday nights when I get to put the kids to bed a little early, pour a glass of sparkling cider, pop some popcorn and enjoy a night of cheesy TV. 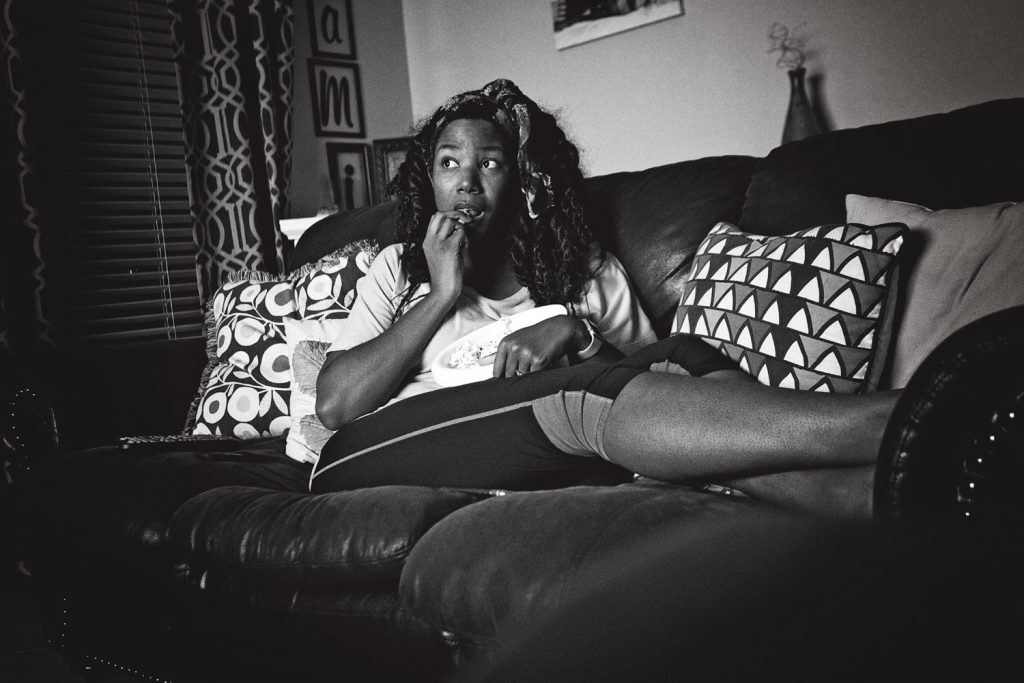 Also, last night a reader commented on my last post about the show and said she appreciated reading my real unfiltered thoughts. Basically she twisted my arm and now I’m committed to writing these. Thanks Sarah!

I told ya’ll I was SO excited when Rachel Lindsay was announced as this season’s Bachelorette. I wasn’t sure I would do weekly recaps, and the first couple of weeks I was out of town and had to catch the show on DVR days late. Now? Now, I can’t stay away. My watch parties have dispersed. My sister doesn’t have cable, and I’m left swimming in my own thoughts.

Plus Rachel is the FIRST black lead in the history of this show. This is a big deal. And I want to see more diversity in the cast like we see this season. If I was ever going to do these recaps, nows the time.

I started drafting this to start of my week 3 recap and put it all into one post but after I hit 1000 words I decided this would be better broken up.

Ok really quick let me catch up on the key points of what I have been DYING to tell ya’ll. Oh first of all let me say, I’m NOT reading spoilers this year. This is a first for me since I discovered there was such a thing. I’m wanting to enjoy it for what it is (a mostly scripted and cheesy “reality” show with couples that rarely work out) and watch it play out.

On the LIVE introductions 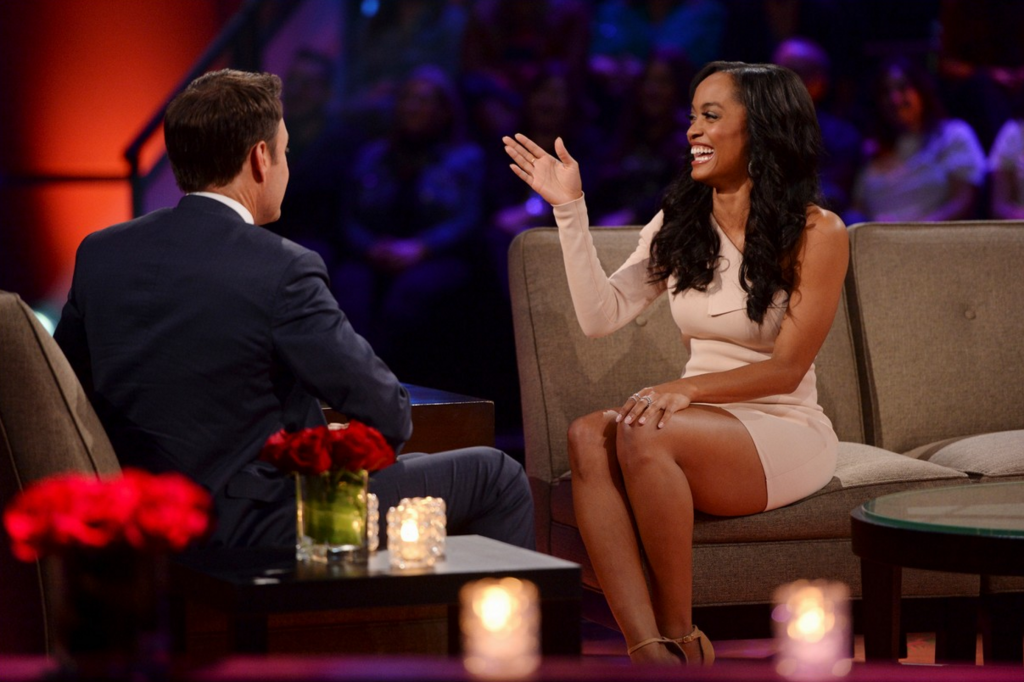 Did Chris just say live? Are they really doing this? Ok so we’re doing this…

In all honesty I felt SO bad for him, knowing that he will never ever EVER live that down. I and the rest of America will be watching and waiting to see if he really meant what he said. I kid (kind of).

Another dude (DeMario)  proposed from the get go while apparently still having the keys to his girlfriend’s apartment in his pocket. More on that later.

And the rest aren’t memorable enough to stick out to me months later. Oh wait, I take that back. One of the guys (Blake) was really boring but later made up for it by coming in with a marching band week 1. I was totally impressed with his comeback. 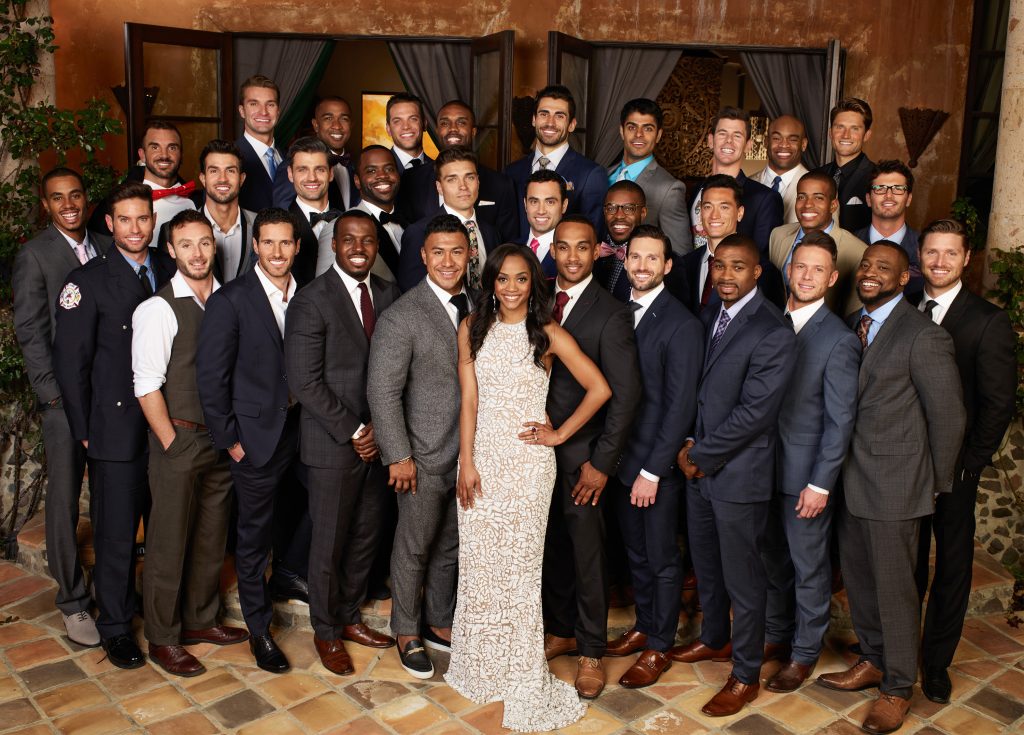 1. Diversity! I mean woah! We’ve never seen such a spread on this show! It wasn’t just in my head though. Legit this was the most diverse cast this show has seen. I must say I hope they keep it up. And despite the Asian guy that was oh so hot, and a couple other minorities leaving on night one, it wasn’t nearly the cuts we see in previous seasons. Like a scary movie we’re usually the first to die.

2. The makeout session with the Columbian dude (was it Jack?). He is hot but TOTALLY screams player to me. Amiright?

3. Peter–willing to throw a brand new box of delicious chocolates in the fire because he assumed Rachel would like chocolate. I mean shoot, I’ll take them! Or share with the guys I mean they need something to go with all the alcohol they’re downing.

I have no obvious favorites this night, except for maybe Diggy. He seems really funny and despite my hatred for shoes I’m totally into his shoe collection and style.

I think there was a lawyer guy I liked too, let me look up his name… Josiah. I like him because he made me laugh talkin ’bout them living in a big house together. Oh, and wrestler Kenny seems SO SWEET. But if I’m being honest I don’t think Rachel is ready to be a mom to a tween just yet.

Ok, we are almost caught up. Highlights of last week…

OMG How have I forgot about him until now… WHABAM dude is SO ANNOYING. I know the producers probably told Rachel she needs to keep him on for ratings but homeboy is driving me nuts. I was so upset that he won the group date game, I was rooting for Kenny–Or heck, anyone but him.

Peter. Wow, Peter! You came out of nowhere. At first the date was cute with Rachel bringing her dog on the plane, and she seemed into him and whatnot. But dinner had me GIDDY! They were sitting and talking about their gap teeth like a match made in heaven. I was so confused as to who he was when the episode started but by the end I was digging him too. And let me say what REALLY made me like him? Rachel said this in her People.com blog:

Among all the doggy fun Peter did something off camera that made me cry tears of happiness. Without telling me or anyone else he snuck away from the date to give a homeless man his sandwich. Take the rose Peter, it’s all yours. The fireworks were going off in my heart long before the real ones shot off into the desert night sky.

You can have my rose too Peter. Just don’t tell my husband.

Speaking of my husband, he’s agreed to watch the show with me now. Not only because he loves me and he owes me because of all of the golf tournaments and sports-watching I’ve endured for 12+ years…

“The bachelorette is black?” he asked. “Ok I’ll watch!” He said half jokingly. Plus I told him Kareem Abdul-Jabbar (after mistakingly calling him Karl Malone) was on this week, and that this season is already 10Xs more entertaining than the last several. Or maybe it’s just cause I’m SO into Rachel. I mean, I’d marry her. He says he’ll watch it with me tonight. We’ll see!

Anyway, back to the show

DeMario is hardly worth mentioning. His “Oh who’s dis?!” Had me rolling and hitting repeat about 6 times like– I know he didn’t just pretend like he doesn’t know her.

Girlfriend was not playing though. With the eyes and neck rollin all over the place. I’ve been tempted to google and see if this whole situation was a producer setup but again, I’m just trying to pretend like this is all real and unscripted and enjoy it for the hot mess that it is.

And YAS GIRL! I felt bad for her but I thought she seemed to handle it well. It’ll be interesting to see how that conversation ends tonight night.

And finally, one more cutie I wanted to call out…

Dean… Dean Dean Dean. Mr. I’m Never Going Back. I’m falling more and more in love with this fella. I mean really, he’s SO adorable. But that’s the thing. He’s cute. Adorable. Not husband material. He’s too young and immature for Rachel. Sista is a BOSS and needs a MAN. She’s also the oldest Bachelorette lead (a year older than me) and I can’t imagine being married to a guy that young. That said, I do hope Dean makes it far though cause he is fun to look at.

Remember how they were beating that into the ground during Nick’s season? Doesn’t seem to have really come up yet. I’m kinda of hoping they’ll keep it that way and just let the romance play out as any other would. We shall see.

Welp. That’s my recap for the first few weeks. Are you watching this season of the Bachelorette too? Who’s your favorite? If not, I caught you up and now you can tune in tonight and join me! I’ll post another recap tomorrow.