That doesn’t quite sound right now does it? Especially when it comes to taking engagement photos. I’m still working on some kind of name for my new endevor but since it’s just a hobby right now, I’m not too worried about it. I did take a suggestion from some of my readers who follow me on facebook and made a watermark using “BMM Photography” so those of you who read know who I am. Still working on how it looks but I suck on graphic design so that may take a second.

On life… We moved into our new place (and are going through binky withdraws, or as my husband calls it “crack withdrawals”) but I’ll get more into that later. We didn’t take extra time off to move so we’ve been trying to unpack as we go, but the main stress of it all is behind us I think. Now I get to focus on putting things where I want them to go, and decorating.

Just before our move a friend of mine told me her little sister is getting married and asked if I’d take her engagement photos. This was my first engagement shoot so I’m excited to share. Look past the ugly logo, still working on that. 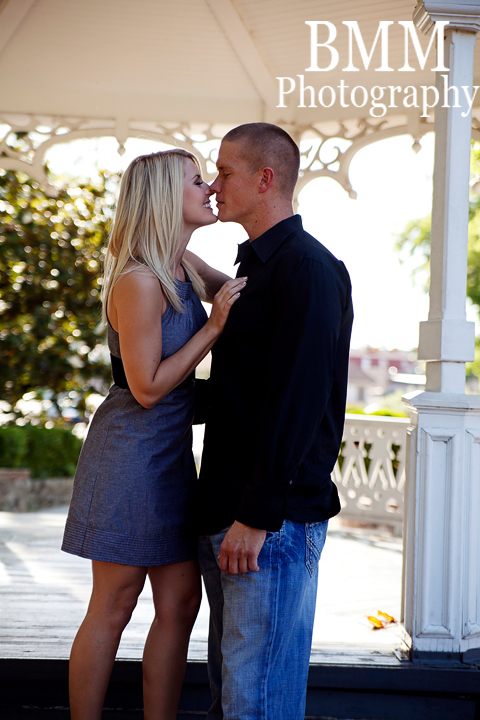 He: Is a fireman in training and former Texas State football player.
She: Is a 5’4 second grade teacher with a bubbly personality.
They: Were like models, and made my day. 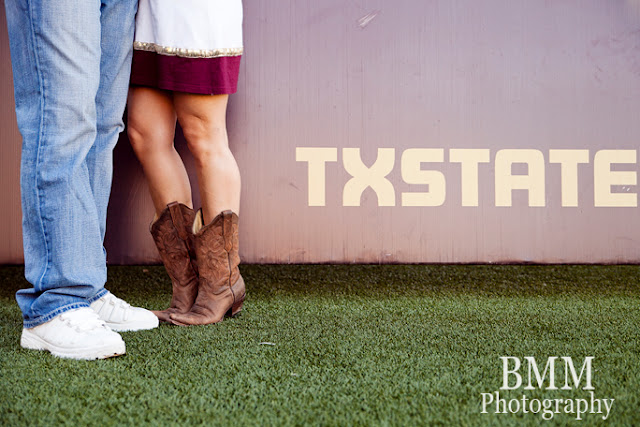 They had connections and got us on the Texas State Football field, and we took the others in San Marcos around the river. I told my husband I want to move there now.

I told them I’d get them 20-30 photos on a DVD but I ended up shooting more than 500 and editing more than 80. There were too many fun ones to choose from!

Let me know what you think of my first try at this! It’s so strange seeing other faces besides Lil’ J pop up in my camera. 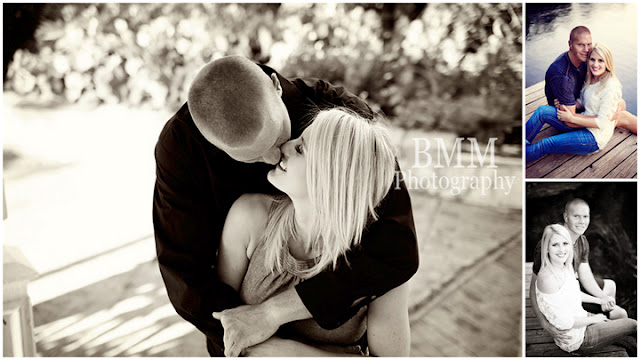 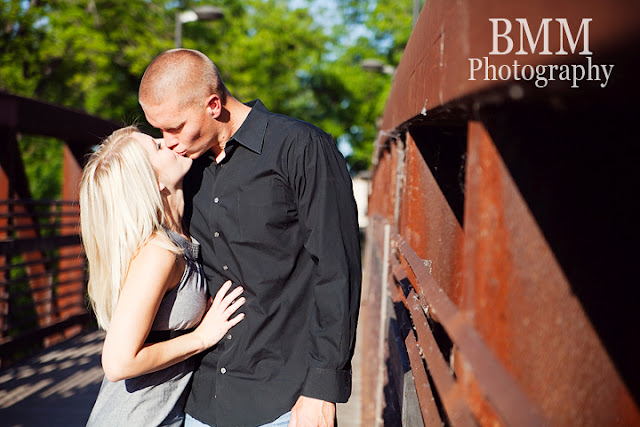 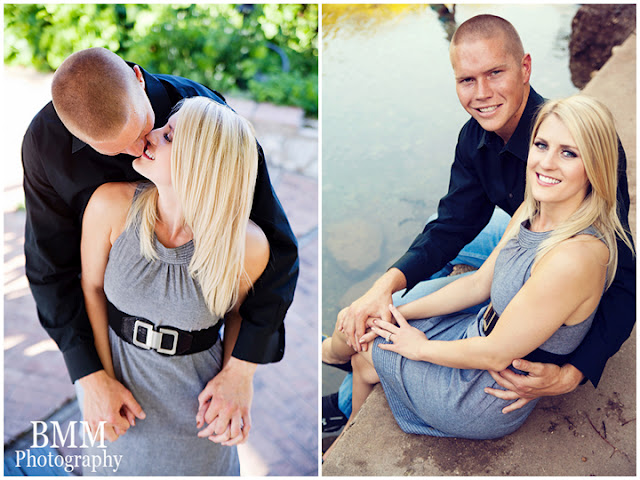 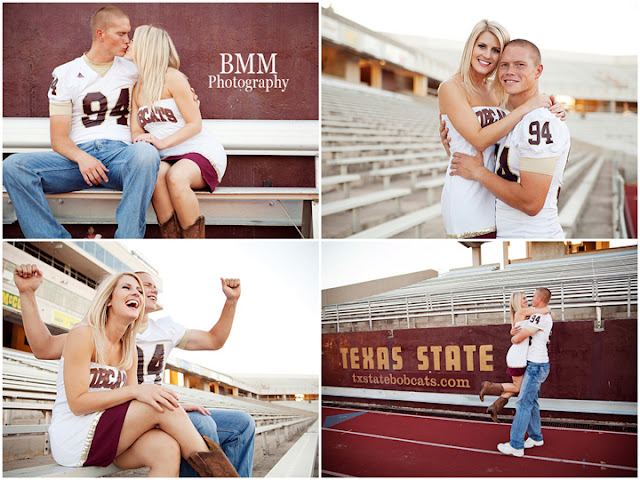 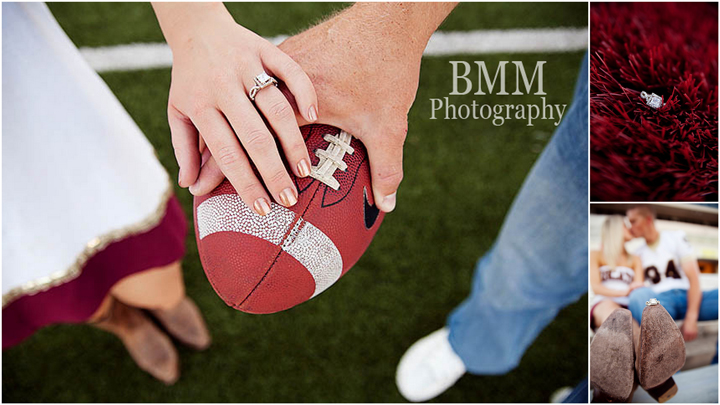 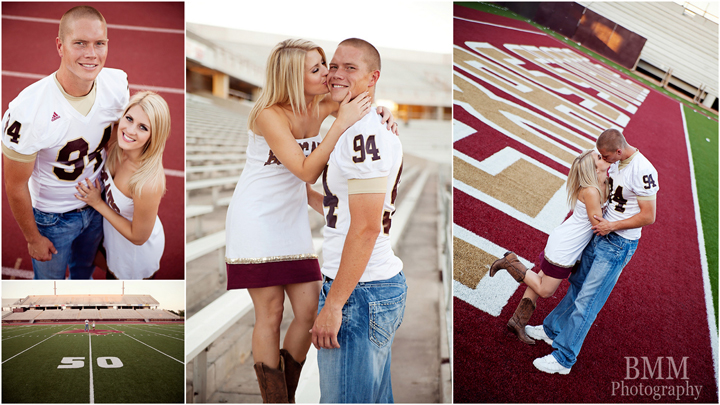 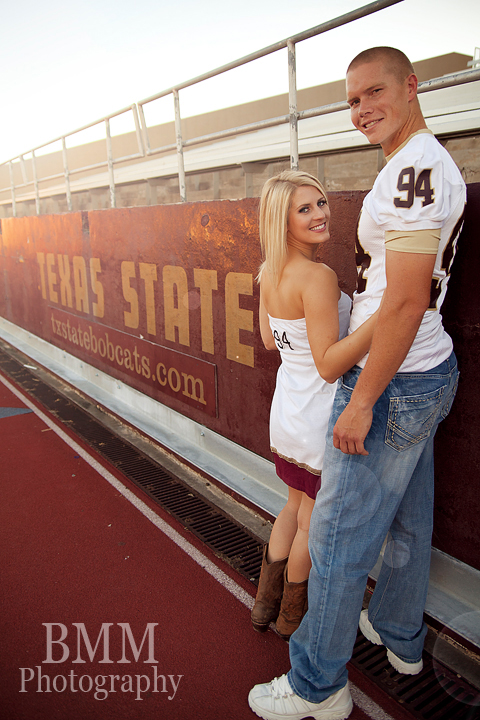 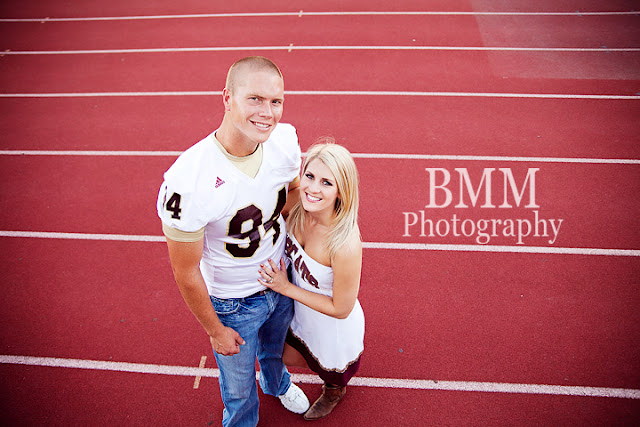 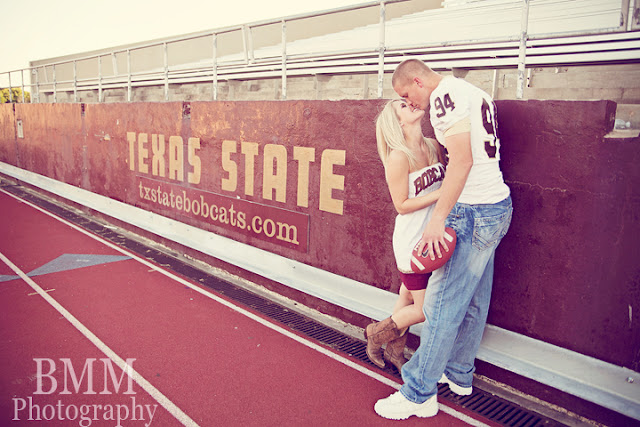 Beautiful! <3
(your work is ALWAYS phenomenal)

you should check out http://www.facebook.com/tendollarlogos

for a cute & affordable logo 😉

Grrrl Please. Who notices the logo. This couple is gorg. Great job!!:)

P.S. If she’s 5’4″, then what’s she standing on. They’re like same height (almost) in that kissing photo.

WOW!!! Jen you did an amazing job! You have a talented eye for this, I see a side hustle in which you would do very very well.

You go girl!!!! They look fantastic. I adore the football/engagement ring pic. And the one of them in the end zone. It’s exciting, isn’t it!? I just did my first senior/graduate session and it was really fun. Plus she is really cute!!!! Congrats on the big move lady…

Congrats on the big move. I feel your pain as we just went through that just a few weeks ago! With that being said… its super fun exciting to move into a new place too! Lots more memories and new ways to make your house a home! <3. I love the pictures... and while that couple is model material, I must give credit where credit is due. To you my friend!!! Wow! Great job at all the angels and I too, love the football hand one! If only we lived closer... James and I are in need of some cute photos! Cute cute cute!

How did the move go? Must be interesting with a toddler in tow!

Girl, they are all beautiful! Does not look like your first time at all! You should definitely start a business. I especially love the TX state ones.

Wow these are great! And such a cute couple. Enjoy decorating and all that jazz 🙂

They’re AMAZING, Jenn! Seriously! I love the sharp focus. I can’t stand when a picture is blurry. Must be all that training with video cams!

Those are awesome! I bet this could become your full time job. Those are fantastic. If I lived close by I would let you practice on my fan 🙂

Really cute couple…and beautiful ring! You did a GREAT job!

What a handsome couple! Congrats on your first shoot =)

These are great! You did a fantastic job and you could definitely go into business for yourself because you could compete with the best of them 🙂 Can’t wait to see more!

I love love love the ones of their hands on the football showing her ring. Very creative and fun! You do awesome work.

These photos are amazing! Do you travel? I would definitely hire you!!

Beautiful, beautiful job Jenn! I am proud of you. Great composition and lighting!

What a darling couple. I love that another girl out there has knees like me and… she is one lucky girl. Her fiance looks nice and he’s a football player. What more could you ask for? If he’s a man of God she’s got it all!

I hope you show us more clients soon!

Those are amazing…I can see why you would have difficulty narrowing them down! 😀

Great job! It doesn’t look like your first engagement shoot. I love the football with the engagement ring shot- perfect! I think your logo will take time to evolve… even McDonalds has revamped the golden arches.

Oh my goodness Jen those pictures are AMAZING!! Love them so much.

great work, this a great shoot. i love the one where the height difference is visible. well done 😉

Okay. I see a lot of folks who try to get into the photography business and their pictures leave something to be desired. But girl, YOU ARE GOOD. No really, these are GREAT pictures and you could charge a lot of money! Well done!

it’s official: you are a superhuman lol these photos are amazing! my favorite has got to be the one of them smooching in the background with her ring on her boot as the focus…love it! if i had 1/2 your talent and even 1/4 of your drive and motivation, i’d be dangerous!!

Wow. These are great engagement photos!! I can’t believe they’re your first couple. Incredible! I’m sure you’re looking at other photographers’ work for inspiration – my photog was wonderful if you want to check out her post production, etc: http://staycationmama.blogspot.com/2009/07/high-line-backdrop-for-our-engagement.html

Ummm…you did EXCELLENT! You make me want to be a better person, seriously 😀 Keep up the fabulous work.

Oh wow, those are really beautiful Jenn! I totally think you could have a great career as a photographer. The poses you shot are really creative. Love the one with her engagement ring balanced on her boot.

If I’m ever in your area, I’ll be requesting my own little mini shoot.

Jennifer! Can’t BELIEVE that this was your first time doing photos like this! AMAZING! If your doing this for a hobby…any interest in coming to Houston at the end of May when my baby girl is due to document a birth story in the hospital with pictures? And then doing a newborn photo shoot afterwards? I’m 100% serious if your up for it! -Kristen theharrisonhouse.blogspot.com

LOL- just noticed the comment moderation which is why you probably just got two comments from me! Feel free not to publish the second comment (or this one) because I’m a dork! haha! -Kristen

how fun that you got to shoot around their school, the 2nd to last shot is one of my faves! great job;)

Have you ever considered about adding a little bit more than just your
articles? I mean, what you sayy is fundamental and everything.
But imagine if you added some great graphics
or video clips to give your posts more, “pop”!
Your content is excellent but with pics and clips, this
blog could undeniably be one of the most beneficial
in its niche. Superb blog!

Reply
edrinkitentertainment.zendesk.com says:
August 7, 2014 at 3:33 am

What’s up to every one, the cntents present at this web page are really amazing for people experience, well, keep up the nice work fellows.