I hate fumbling through my wallet with Lil’ J in tow, trying to find my credit cards, coupons, etc. So when I was approached by AT&T to review the mobil wallet–Isis. I was intrigued.

The first thought that came to mind when I was learning about it was “is it secure?” They assure me it is, with an additional passcode to access the app, and easy account freezing if my phone were to get lost or stolen (just one phone call).

I’ve had my wallet stolen more times than my phone, so it’s actually less scary to think of them being together that way.

Unfortunately it doesn’t work on the iPhone just yet, so I’m trying out the app on a Samsung Galaxy SIII. They got me all set up at the AT&T store but then I failed as I tried it myself.

The app lists stores it works at. Funny enough, the two cities it’s available in are Salt Late City (where we often visit, and moved from) and our current town of Austin.

The directory lists stores like Finish Line, Jamba Juice (yum!), Dillard’s, JP Penny’s, Champs Sports, Whole Foods, and more. It also lists coupons you can redeem at those places. One that stuck out to me was Coke vending machines. You can get a free drink! Why not? I saw one that accepts Isis at the mall but I couldn’t get it to work. 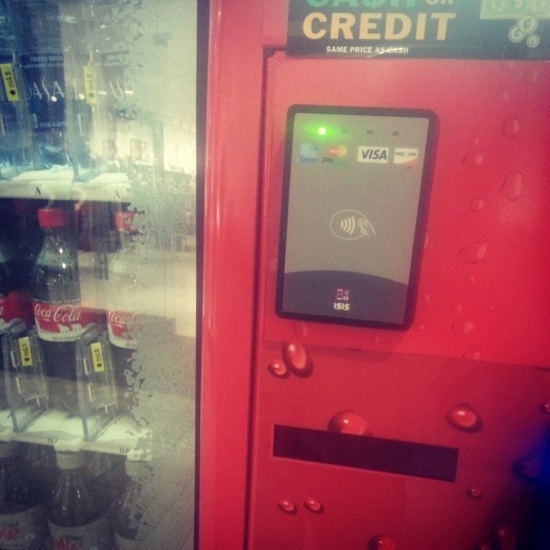 I tried and tried but nothing happened. Meanwhile Lil’ J is yelling “my drink, my drink!!” and pointing to the machine, while it didn’t work. Our Fanzz store, while on the list of stores, didn’t have a way to pay using the device. Then, after the vending machine incident I was too afraid to make a large purchase and it not work. So we left the mall, my husband a bit disappointed that he didn’t get any athletic wear, and I got the number for Isis support.

Luckily they’re there 24/7 and a nice man helped me figure out what I was doing wrong. I was holding my phone perpendicular to the payment pad when the phone should have been flat against it. 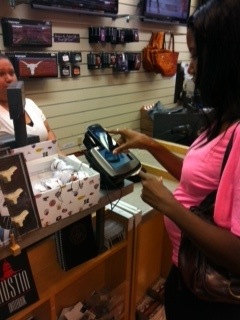 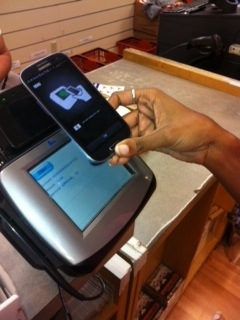 We tried again at the University Co-Op and it worked! While I’m not a huge Longhorns fan just yet, I did get a cute ornament for our Christmas tree, and my husband got the sports attire of his dreams (this was his reward for not vocally complaining during our family Christmas photo session).

1. It’s easy and convenient. I always have my phone on me, and so long as it’s got battery power, it would be cool to just skip credit cards from now on.

2. The deals and coupons are easy to access. I know there are coupon apps and coupons in the paper but I don’t have time to seek everything out. It’s nice that I can see “buy one Jamba Juice, get one free” in the same screen I’m using to pay for my fruit smoothie.

3. Their customer support is top notch. I told the guy I was chatting with I’d call him back if it didn’t work and he called ME back later that day to make sure I got it worked out. I can’t say a company has ever done that for me before. I love that they’re always available too.

4. You can use a pre-loadable card (which is what I’m using on it) instead of your own credit cards, if you’re worried about security. You can re-load it with MoneyPaks or Paypal.

Things I think ISIS could improve on:

1. Locations it’s available. I know the app is still fairly new so this is bound to come, but I’d love to see it in stores like HEB, Walmart, restaurants. Basically all the places I like to shop. You know those little wireless payment things you can wave your credit card in front of? That’s what Isis uses, so I assume it would be an easy upgrade for many of these places.

2. How to use it isn’t exactly intuitive… At least not to me. You enable the app, then you can pay, simple as that, but I felt like there should be another button/step in the process. haha. Not that they need to make it more complicated. Where I was screwing it up was how I was holding it, maybe if there was a photo of how to position the phone, and a reminder to hold it until it beeps–it would have been easier. Of course, now that I’ve figured it out, it won’t be a problem for me anymore. It’s like riding a bike.

3. Get it on the iPhone! I think this could be in the works, and I sure hope so because while I love the app, I have a love affair with iOS and Droid does not like me.

Overall, I’m really liking Isis. I’ve still got a little bit of money on my pre-loaded card so I want to take Lil’ J to Book People and find some fun Christmas and big sister books to bring home. I also want to go back and challenge the vending machine. I’ll let you know how it goes!

*AT&T provided me with a phone Isis works on and MoneyPak card. Opinions expressed are my own.

Sounds cool!! But, just like you – I’m an ios person, so hopefully it will come to both iPhone AND Charleston, SC 😉

And when it does, you can say you heard about it first 😉

I absolutely love apps that make my life easier and quicker like this one. Looks extremely cool but alas I an an iPhone user 🙁 I hope they come out with an upgraded version that supports ISO soon because I would definitely use it

Waaaah I need this for my iphone. This is perfect for me. Hate whipping out my wallet. Thanks for sharing.

This kind of self-help e-book has become authored by Todd McDonagh that has helped more than
60.1000 people to remedy their nervousness in more than 10
years. Simon McDonagh provides himself suffered with anxiety previously and that is how he compiled using this method to aid other people handle stress and anxiety administration problems.
Cognitive-behavioral treatment which is the foundation of the particular Panic Away strategy is
regarded as the most reliable along with established way to combat nervousness.

It’s the method most expert specialists would certainly employ to help you counteract panic attacks. Panic Away is renowned for their “One Proceed Technique” which shows you the way to alleviate the a sense stress when you have the very first symptoms of an anxiety attack. It’s based on a straightforward method which intentions to allow you to cease your current panic and
anxiety attack within 21 years of age a few moments and to end
your anxiety normally, inside of Several moments. Mcdougal is very available using the proven fact that healing General Anxiety (GAD) will take in regards to a 30 days or more to begin actually experiencing diverse, but also for simply preventing panic attacks reduction are
located in min’s.

Based on Victor Frankl, one of the planet’s finest psychiatrists, this process may
be the simply correct remedy for anxiety. It’s not at all medication, it’s not at all trance, not really chinese medicine or any other unusual approach, merely simple, simple therapy using a
unique way of nervousness administration. It’s going to coach you on the best way to crack your anxiety loop and not just handle your current panic or anxiety attack, yet change your tables about nervousness as well as discover ways to to not at any time worry an anxiety attack once more. While there are various selfhelp methods targeted at letting you defeat nervousness, a lot of them need you to go back on the past, on the primary anxiety attack you’ve ever experienced,
and also dig up the main grounds for that. Whilst they may well be effective in the future, results might
take some time being sensed. The Panic-Away technique commences working instantaneously looked after teaches ways to work with
that throughout lifestyle conditions like when driving a car your car or truck,
taking a aircraft or going on a date.

With this Turbulence Training review I would
like to break up each of the buzz surrounding the plan and
also produce my personal activities with all the software.
I’d heard about the actual inventor Craig Ballantyne prior to by simply reading through Gents Wellness journal and so i had been sure he had a few authenticity for you to their identify. Today anyone online can cause a book and sucker people into acquiring it so I wished to be sure that mike geary recognized his / her things. Turbulence Training workouts are under no circumstances a new magic pill with regard to shedding fat but it’s an
excellent device which will offer you way better outcomes than standard body builder workout routines.

The basic training principles guiding the program is high
intensity interval training workout, which has been tried and tested to lose eight periods
the maximum amount of body fat since conventional regular state cardio.

Nevertheless this sort of interval training definitely has a cost because you will need to perform a whole lot more
challenging to have the desired consequences. While you may possibly accomplish constant
point out cardio exercise and this will always
be not hard as you watch television on an elliptical
machine but when you’re carrying out intense interval training workouts you will be working out extremely difficult. A benefit to accomplishing this kind of instruction is the fact that you are in addition going to be able to get much more completed in a new smaller period of time. So rather than residing at a fitness center for a long time at a time, you can rather have a extremely effective exercise routine in mere 20-30 minutes.

I am sure this article has touched all the internet viewers, its really really nice paragraph on building up new website.|

The celebrities who have allowed their images to be used receive
50% of the royalties from each use, but have asked for users to behave themselves and not be
involved in any sex tapes, bank robberies or murders whilst assuming their guise.
This is how the human mind works and there is nothing mystical or magical about it.
What about how someone can get a free ps3 through survey offers.